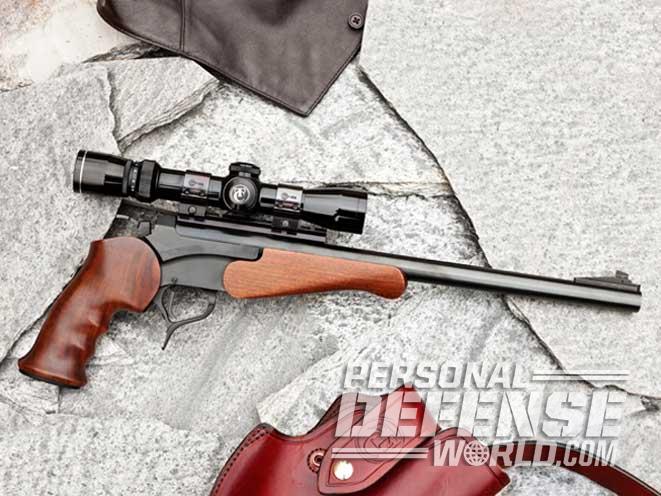 1 of 9
Thompson/Center Encore
“The Encore is a single-shot, break-action pistol capable of astonishing accuracy.” 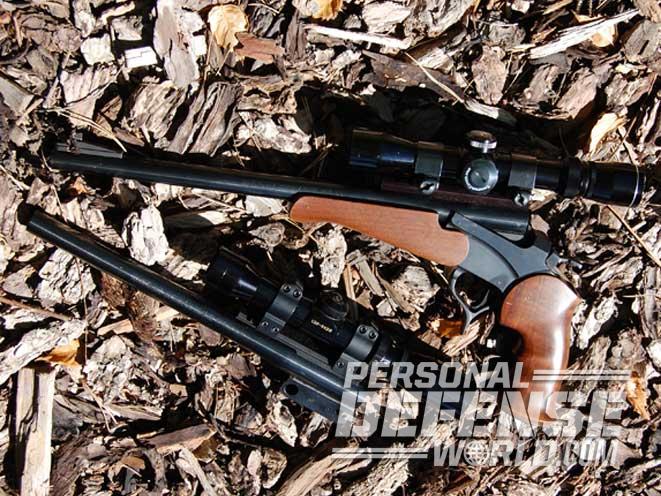 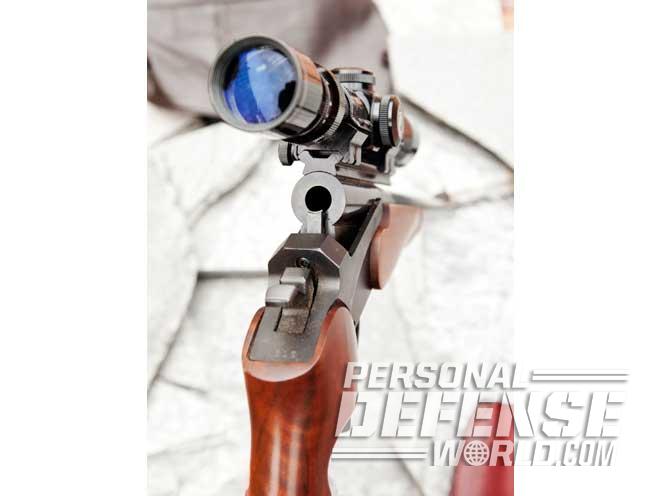 3 of 9
Thompson/Center Encore
The Encore features a break action and an easy-to-use external hammer. The top of the barrel features an integral rail for mounting a scope. 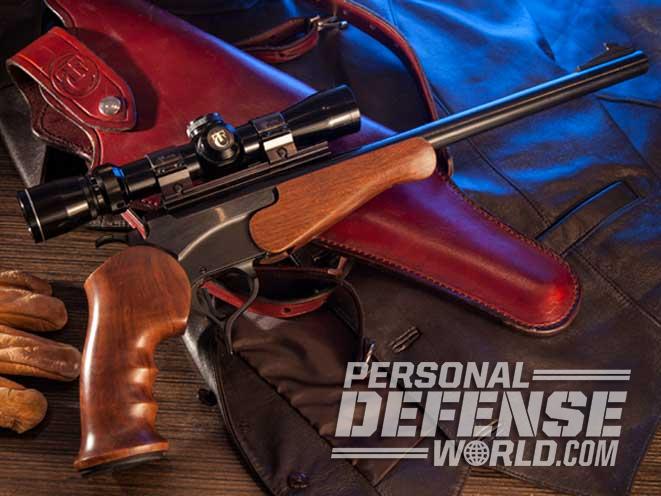 4 of 9
Thompson/Center Encore
The Encore accommodates a variety of grip styles, such as this hand-filling walnut model. 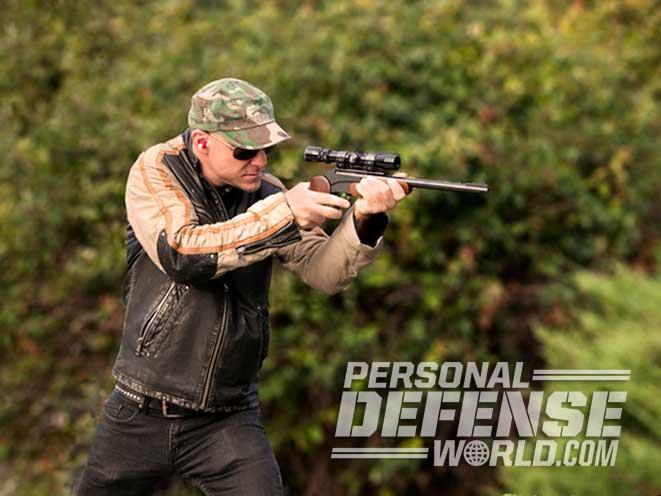 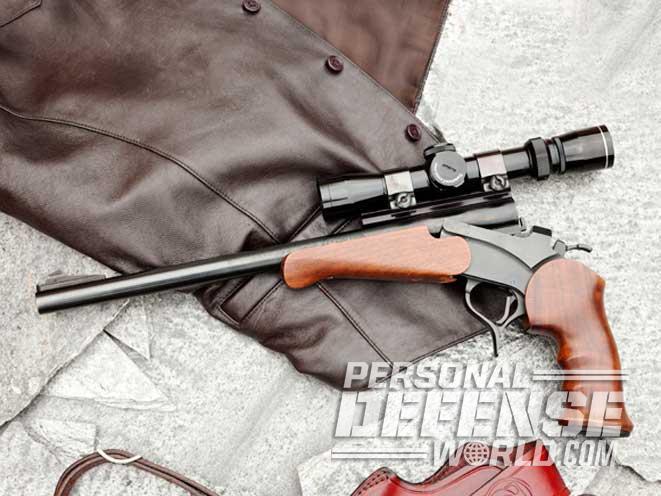 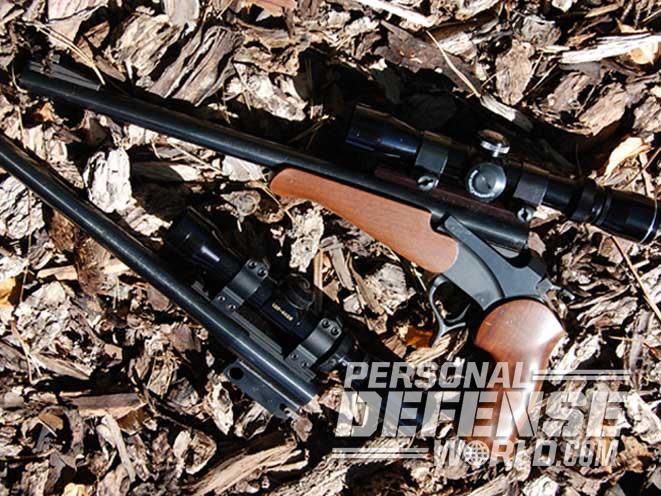 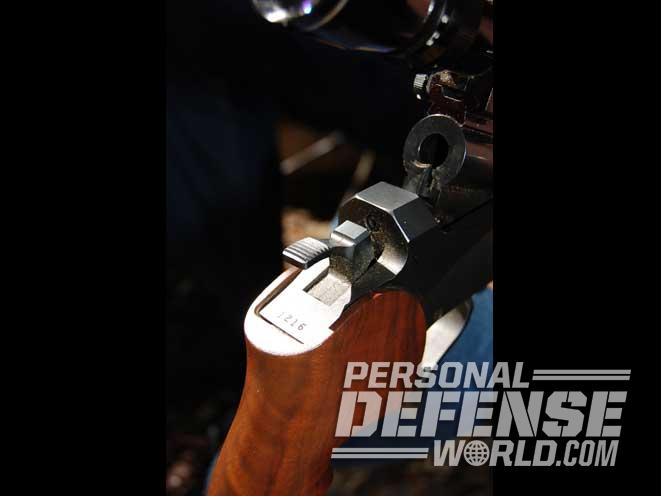 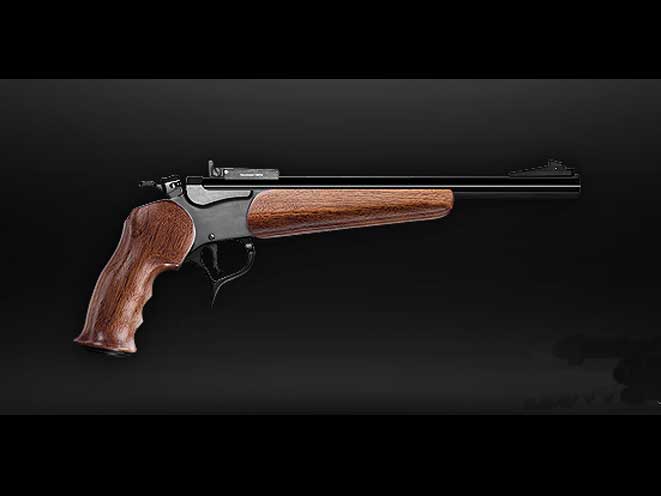 9 of 9
Thompson/Center G2 Contender
“Original Contender barrels may be used on the later G2 models”. 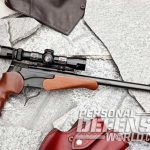 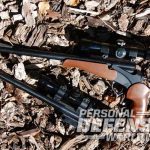 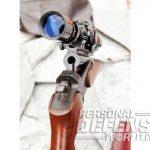 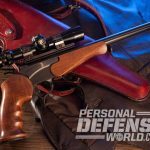 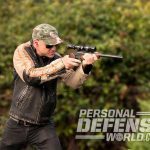 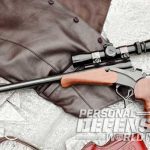 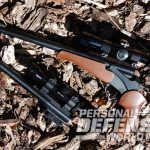 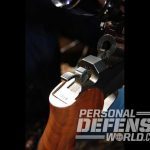 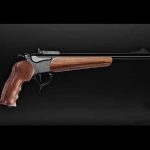 Thompson/Center made hunting history when it introduced the first Contender pistol in 1967. The pistol chambered a number of different rifle and handgun cartridges, and regularly delivered minute-of-angle (MOA) accuracy. The genius of the Contender design was that it accepted a variety of interchangeable barrels chambering everything from .17 HMR and .22 LR to .45-70 cartridges. It offered sufficient medicine for all but the largest, most dangerous game.

I acquired a Contender early on chambered for the .223 Remington. I mounted a long-eye-relief scope, which provided the precision necessary to shoot prairie dogs and other small, distant critters. I later added a .22 rimfire barrel, but the .223 tube saw the most use.

I don’t know how many prairie dogs and coyotes I killed with that gun, but the number was considerable. Shot from a bipod or sandbagged rest, the Contender was deadly on prairie dogs and ground squirrels out to 300 yards or more. That pistol also accounted for several coyotes. I soon learned that shooting the long-barreled pistol was a lot more fun than using a bull-barreled rifle. Yes, it was more challenging, but once you got the hang of the Contender you could wring all the accuracy you needed from it for most hunting chores.

The break-top design doesn’t require barrels to be specially fitted to the action. Any Contender barrel will fit any Contender frame. Shooters can purchase additional barrels in a variety of calibers for a fraction of what they’d pay for a complete firearm. The sights are mounted on the barrel, and they remain zeroed when barrels are changed. You need only a flat-bladed screwdriver to change barrels. Swapping barrels is very easy—simply remove the screw(s) holding the forend in place, tap out the large hinge pin and remove the barrel. Reverse the procedure to install the new barrel.

The Contender frame features two firing pins, allowing you to fire either centerfire or rimfire ammunition. A selector on the exposed hammer lets you to choose between rimfire or centerfire pins. You can also select a safety position that prevents firing when engaged.

An adjustable trigger allows you to tailor the take-up, overtravel and pull weight. You can have a heavier trigger pull suitable for general duty, or a hair trigger for long-range shooting.

When the Thompson/Center Encore was later introduced, it was strong enough to chamber serious big-game rounds like the .300 Winchester and .375 H&H Mags. In all, 18 different chamberings were available, not counting shotgun and blackpowder offerings.

Like the Contender, the Encore is a single-shot, break-action pistol capable of astonishing accuracy. It features a patented, automatic hammer block safety with a bolt interlock. Both Contender and Encore barrels are drilled and tapped for scope mounting. I don’t think I’ve ever fired either of these pistols without a long-eye-relief scope attached. You need the clarity a scope provides for long-range accuracy.

When the Encore was first introduced, I had the chance to hunt Texas whitetails with the new gun. I was paired with Larry Weishuhn, one of the most experienced whitetail hunters on the planet. He wanted to film hunting and killing a trophy deer using a blackpowder Encore carbine. He graciously granted me the first shot on deer.

The first morning of the hunt, Larry handed me a .30-30 Encore pistol with a 2.5-7x scope attached. He’d arrived in camp the day before and had taken the time to sight in my new pistol. “Want to stop by the range and check the zero?” he asked. “The scope is dead-on at 100 yards.”

Larry’s an old pro, so I trusted him to do the job—and the sun was peeking over the horizon. “We’re losing hunting time,” I said, climbing into the passenger seat of the truck. “Let’s go find some deer.”

As luck would have it, we hadn’t driven more than 15 minutes before a nice 10-point buck appeared on the hillside above us. “Take him!” Larry said. “I’ll get the next one.”

I got out of the truck, closed the action on a freshly loaded round, and then hurried to a nearby fenceline. The deer waited patiently as I tried to line up the shot. That’s when I realized the scope was set at 7x, drastically reducing my field of view as I held the Encore at arm’s length. I should have checked the power setting when I accepted the gun. The deer ran off while I was adjusting the power ring. Lesson learned: Check the magnification setting before trying to shoot.

We spent the rest of the day driving between potential hotspots, then walking through brush to locate a good calling location. When Larry rattled the antlers he carried, an excited buck came running. It was a small deer neither Larry nor I wanted, so Larry waved the deer off. That scenario was repeated off and on throughout the day. We saw lots of deer, but nothing we decided to shoot.

The following day was a repeat of the first—plenty of small to mid-sized deer, but we passed on all of them. As we headed back toward the truck at dusk, I saw three deer watching us from a little over 100 yards away.

Looking directly into one of the intense, dark red sunsets Texas hill country is famous for, I couldn’t clearly see the rack on the largest buck. Larry answered my unspoken question by loudly commanding, “Shoot that deer!”

Dropping to a sitting position, I quickly settled the crosshairs behind the deer’s shoulder and gently squeezed the trigger. The 150-grain, .30-30 factory load dropped the animal in its tracks. I didn’t fully appreciate my trophy until I walked up to it and got a good luck at its antlers. He scored 163 points—my best whitetail to date.

When I returned home, I took the Encore to the range, along with a variety of factory ammunition. All three loads I tested delivered sub-MOA accuracy. The Thompson/Center pistol grouped better than any of the .30-30 lever rifles I own. That wasn’t an aberration. I‘ve used several T/C pistols over the years, and all delivered spectacular accuracy. All they require is a rock-steady hold and good trigger control.

I’ve hunted with other handguns—I took a nice mule deer buck at 40 yards with an open-sighted Ruger .44 Mag. However, I wouldn’t have tried this shot if the animal had been much farther away. Hunting with open-sighted revolvers is “iffy” when ranges exceed 75 yards.

Thompson/Center Contender and Encore pistols are an entirely different game. These single-shot handguns are deadly at most rifle ranges once you learn to shoot them accurately. This skill isn’t all that difficult to acquire. You simply need to spend a fair amount of time at the range and shoot at a lot of targets.

Don’t be tempted to shoot from the off-hand position unless the animal is close (50 yards or less). These long-barreled pistols are awkward to hold at arm’s length while you try to find the animal in your scope. Get to a solid sitting position and, if possible, use a folding bipod to steady the gun. The more time you spend at the range, the greater your confidence (and success) will be.

If you want to try your hand at hunting with a handgun, Thompson/Center’s Encore and G2 Contenders are great options. With a good, solid rest and a gradual trigger pull, these pistols are—by far—the best way to go. 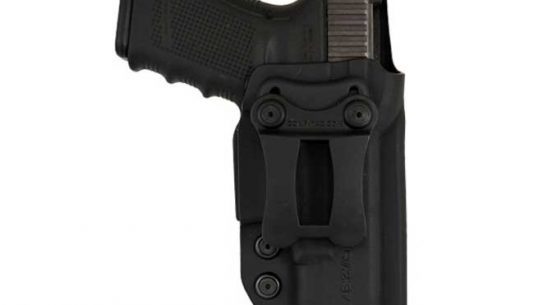 Comp-Tac Infidel Max: A Cant Adjustable, Inside the Waistband Holster

A variation of the original Infidel holster, the Comp-Tac Infidel Max allows the user...