"The Backup’s stainless steel, 2.5-inch barrels are 0.5 inches shorter than the gun first sold by Remington in 1867. This makes the Bond Arms gun even more compact."

The Bond Arms Backup is a classic double-barreled derringer with the features that 21st century shooters demand. But the Backup isn’t just an upgrade. It’s a redesign that combines the classic lines of the original Remington design along with a number of features that add strength and safety to this iconic American pistol.

The Backup’s stainless steel, 2.5-inch barrels are 0.5 inches shorter than the gun first sold by Remington in 1867. This makes the Bond Arms gun even more compact. In addition, its modern, non-reflective finish is a clear departure from the shiny double-barreled derringers. The whole package is just under 4.5 inches long, approximately 3.7 inches high and about 1.2 inches wide. It’s just the right size for carrying in a small holster or in a pocket. Weight with the 2.5-inch barrel is about 18 ounces. This is sufficient to absorb at least some of the recoil of the modern cartridges for which this pistol is designed. 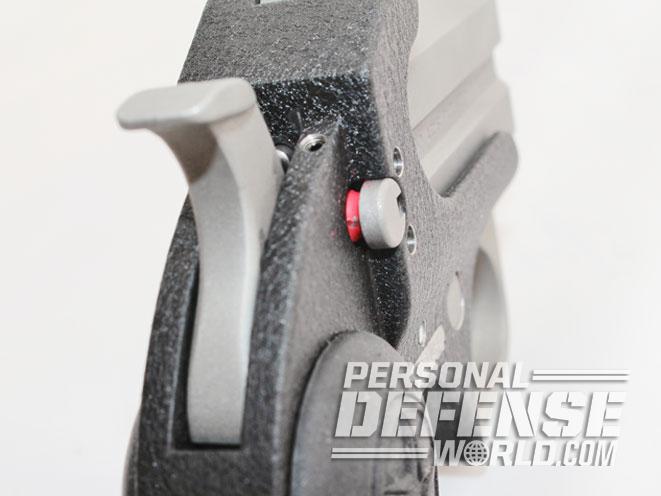 The Backup is not just concealable, it also has a number of features that make it a safer and stronger pistol than granddad’s derringer. One complaint about the original Remington design is that the pistol could discharge if dropped on the hammer. The Backup has a rebounding hammer that can’t be pushed forward to touch the pin when the hammer is not cocked. In addition, this pistol has a rebounding firing pin that also helps prevent accidental discharges if the pistol is dropped. The robust frame is another important feature. The Backup’s thick black crinkle-coated, steel frame is strong enough to take the pressure of the .357 Mag and 10mm cartridges. Other safety features on the Backup include a triggerguard and a mechanical safety. 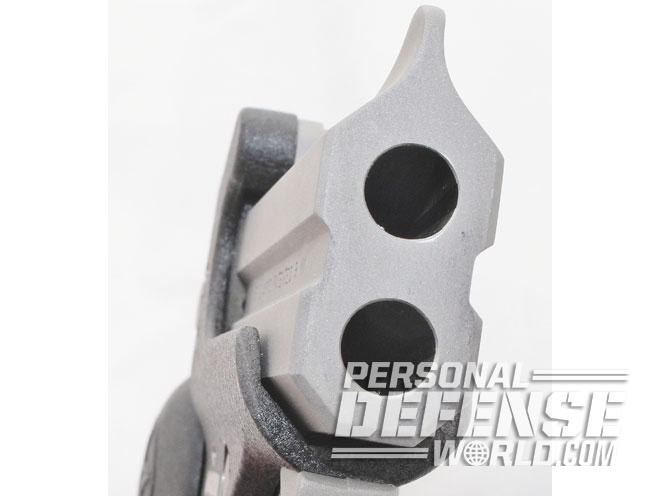 Loading and unloading the Backup is also improved. The locking lever is cammed and spring loaded for a tighter barrel-to-frame fit, and the hinge is much stronger and less likely to crack than those of the original Remington design. In addition, the hinge pin is removable, making it very simple to change calibers by switching barrels. Bond Arms sent three sets of 2.5-inch barrels for testing along with the pistol. They were chambered in .38 Special/.357 Magnum, .45 ACP and 9mm.

An examination at the workbench clearly indicated that the Backup is a quality firearm. All of the barrels locked up solidly, and there was no play at all between the barrels and the frame. The spring-loaded cam lever was smooth in operation and the action stayed firmly locked when closed. The hammer cocked with moderate effort and could not be pushed off of the full-cock position. The bores were bright and there were no blemishes, sharp edges or tool marks anywhere on the pistol. Trigger pull was consistent at 7 pounds, and the sear broke cleanly.

The Backup was fired at a full-sized silhouette target at 5 yards using a two-handed and one-handed stance to simulate “real world” use.

My friend Les Sharf and I shot the Backup and found that the key to shooting it was maintaining proper grip so that the index finger would fall properly on the face of the trigger, to ensure a light, even pull. To do this, the pistol’s small, curved grip is grasped by the thumb and middle finger with the index finger on the trigger. The ring and small finger should be curled tightly under the base of the grip. This “three finger” grip allows the shooter to easily cock the hammer and pull the trigger straight back.

After learning the grip, I used the 9mm barrel and slowly fired 12 shots from a two-handed retention position on a silhouette target. The result was four Xs, four 10s and four 9s.

At a later time, I returned to the range to shoot some action drills. A silhouette target was set up at 5 yards and a Competition Electronics shot timer was used to time drawing from the holster and firing two shots on target. The drill was repeated five times with the 9mm barrel using Black Hills’ 115-grain +P jacketed hollow points (JHP). Average time per run was 7.94 seconds and the total score was 48 out of 50 points. Eight shots were in a 7-inch group in the chest and two shots were under the right collarbone, in the area of the sub-clavian artery. Two of the strings were fired using a two-handed retention hold and three strings were fired using a one-handed stance with the shooting arm extended.

The front sight was used to provide a flash sight picture. The two-handed grip and one-handed grip proved to be equally accurate. The times weren’t particularly fast, but the group did open up some when I shot as fast as possible using the timer. If I were to carry a Backup, I’d invest in the .22 LR barrels and use cheaper rimfire ammo to practice acquiring the grip, cocking and firing until I could handle the pistol as fast as Gordon Bond can.

The three sets of barrels were also tested for velocity. Given the short 2.5-inch length of all three barrels, I selected loads with light bullets for their respective calibers. That’s because I selected loads that would generate sufficient velocity and energy to give them a reasonable chance of expanding when they reached the target. A 230-grain .45 ACP JHP travelling at somewhere around 700 feet per second (fps) isn’t likely to perform well. Lighter bullets also kick less, and in an 18-ounce gun with a small grip, recoil is a definite consideration. I had a good supply of light bullet loads from Black Hills, CorBon, ICC and Liberty Ammunition on hand for testing, so I took them to the range to see how they’d do. As I thought, they generally produced relatively high velocities from the 2.5-inch barrels.

When I requested the pistol for testing, I told Gordon Bond that I wanted to see if the 9mm barrels would be the best overall performer in terms of efficiency.

I thought it might because the 9mm operates at relatively high pressures and its chamber is much shorter compared to cartridges like the .357 Magnum. Given the short 2.5-inch test barrels, a shorter chamber leaves a longer section of barrel for the expanding powder gasses to accelerate the bullet down the bore. 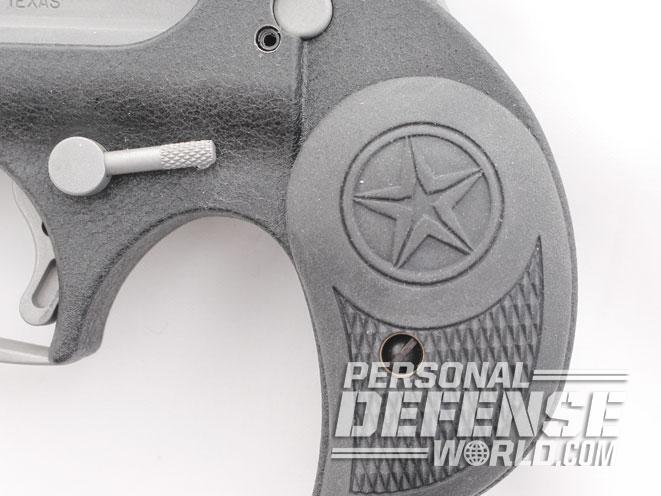 This proved to be correct when comparing the 9mm to the .357 Magnum loads. Both cartridges use a 50-grain, nickel-plated, copper “cluster bullet,” which is a projectile designed to fragment into a pre-determined number of pieces. The 9mm load produced an average of 1,825 fps while the .357 Magnum produced only 1,506 fps. This compares to the company’s published test velocities of 2,000 fps for the 9mm and 2,100 fps for the .357 Magnum. Clearly, the 9mm was more efficient than the Magnum in the short derringer barrel in terms of both velocity and energy.

On the other hand, CorBon’s 160-grain, standard-pressure DPX load produced an average of 931 fps in the derringer versus its factory test velocity of 1,050 fps. It lost only 119 fps in the short derringer barrel, while the 9mm Liberty load lost 175 fps. Even so, the Liberty load was more efficient, producing 91 percent of its test barrel velocity from the 2.5-inch barrels of the Backup, while the .45 produced slightly less at 88 percent. The 9mm also produced 369 foot-pounds of muzzle energy compared to the .45-caliber DPX’s 307 foot-pounds. Therefore, with respect to both velocity and muzzle energy, the 9mm was the most efficient cartridge tested, however both cartridges retained sufficient energy for expansion and/or fragmentation when fired in the Backup. 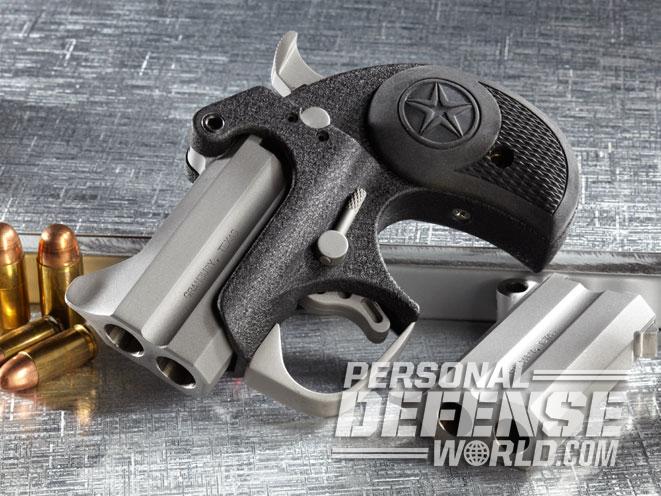 All things considered, the Backup is just what the original two-shot derringer was designed to be, and a bit more. Even when chambered for smokeless-powder revolver cartridges, it produces higher velocities and energy levels than the .41 rimfire ammo that was chambered in Remington’s original double-barrel derringer. Semi-auto cartridges do even better. In addition, the Backup is also much less prone to breakage and accidental discharge. All of this clearly indicates that while Bond Arms’ derringer may be a small pistol, it clearly speaks with a lot of authority when danger is close at hand.