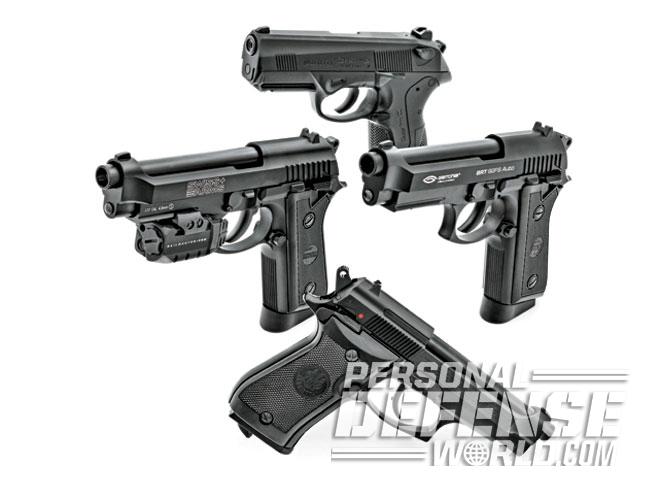 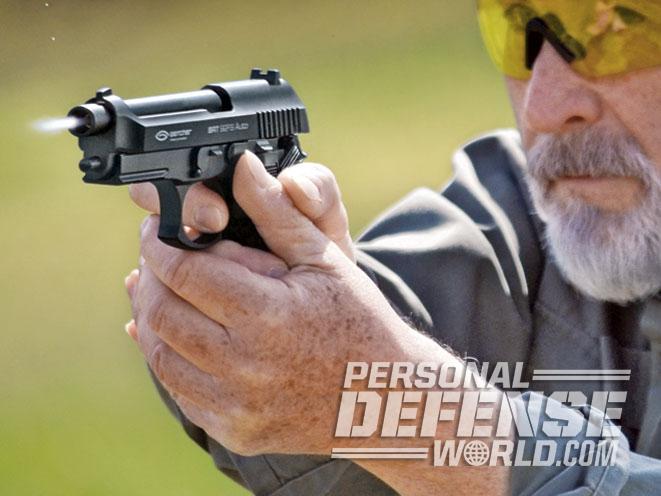 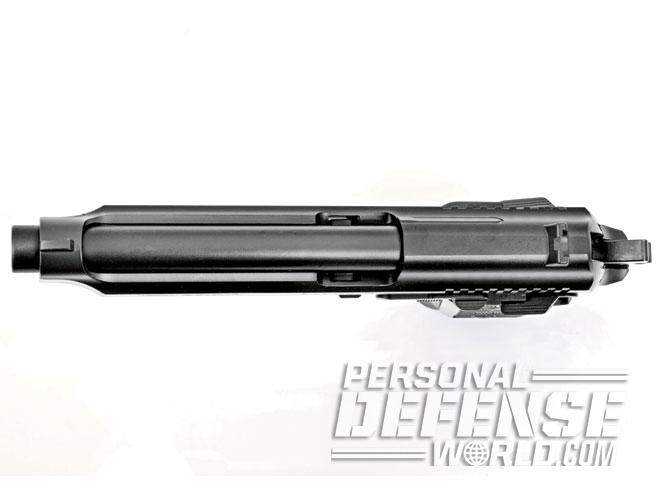 3 of 11
Gun Review: Beretta Air Pistol Replicas from Umarex, Gletcher & Swiss Arms
All of the Beretta-style air pistols have barrels and open-top slide designs identical to their centerfire 9mm counterparts. 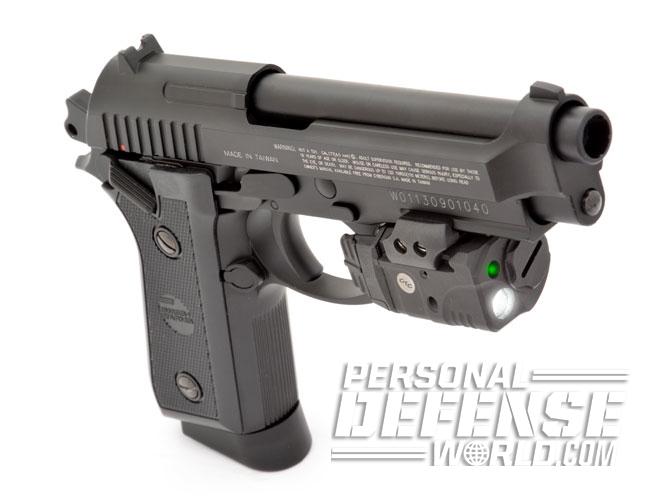 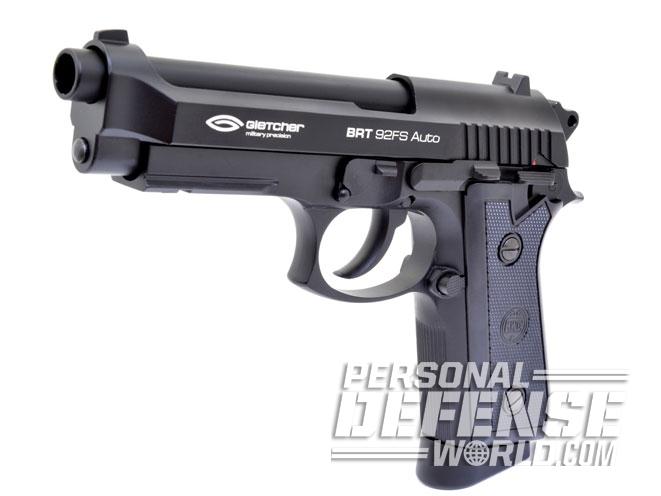 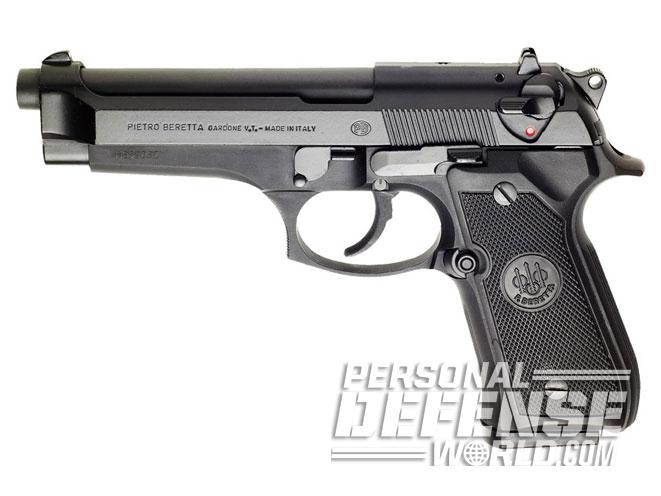 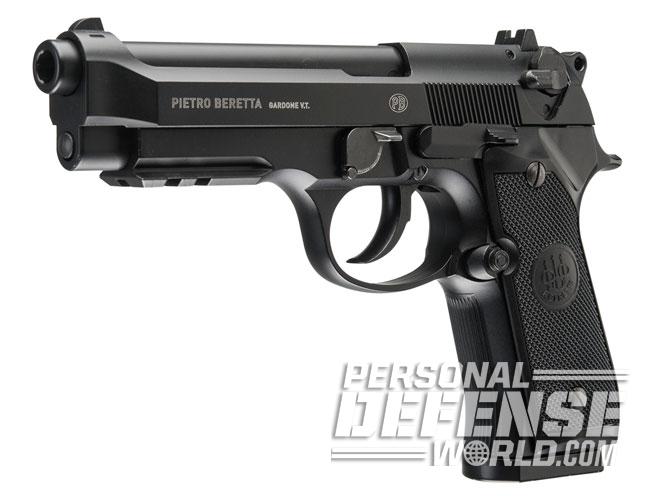 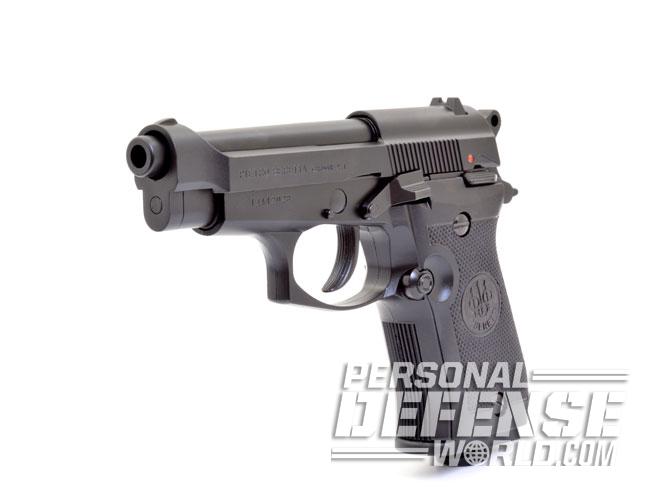 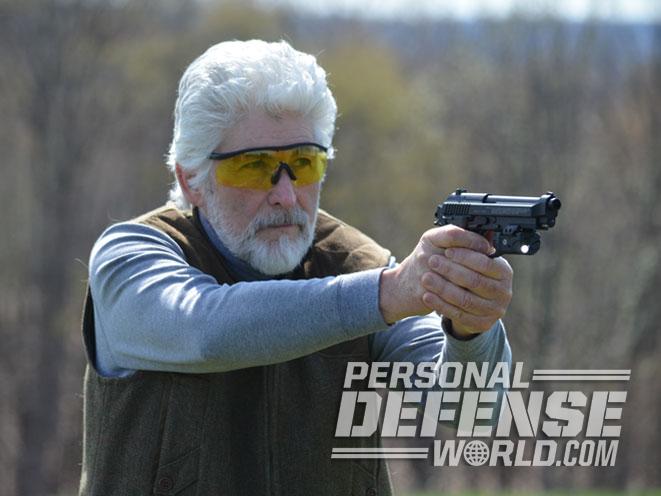 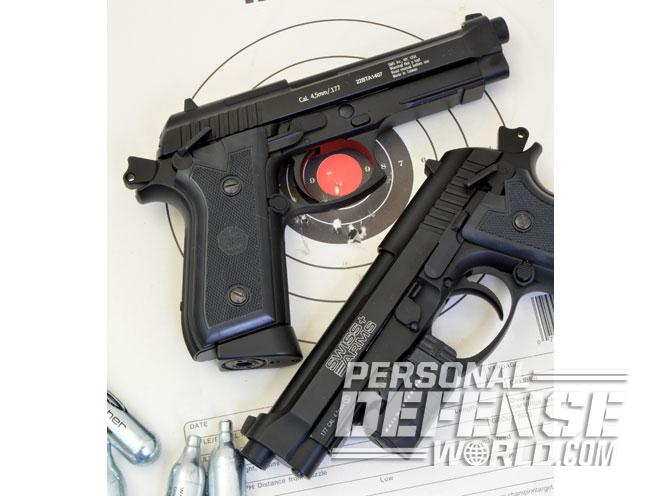 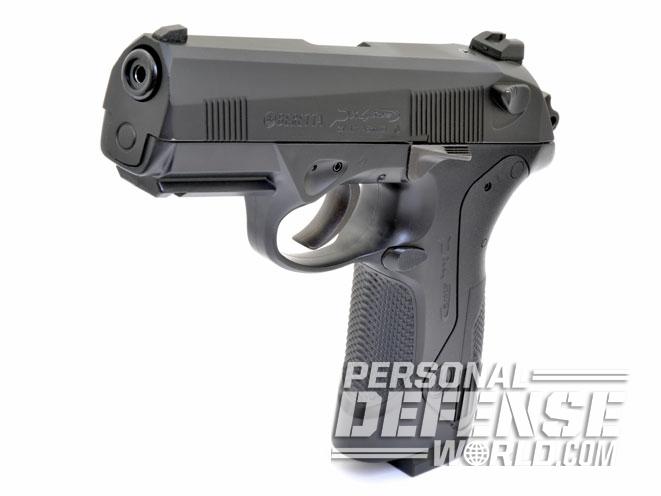 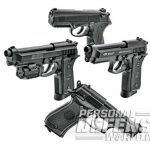 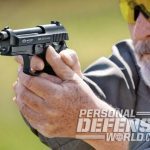 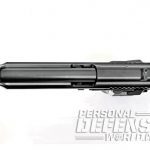 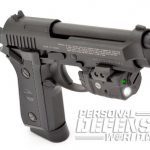 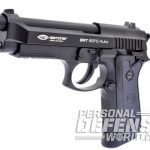 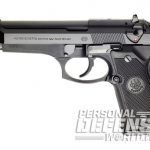 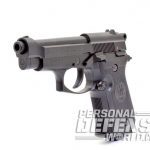 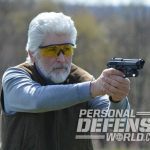 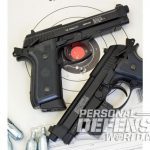 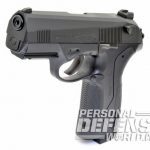 The Beretta 92 FS and its variations for military and law enforcement are double-action/single-action (DA/SA) semi-auto pistols that employ Beretta’s unique open-slide design and short-recoil, delayed-locking-block system. The open slide was devised to effectively eliminate the possibility of stove-piping and produce nearly flawless cycling, as well as reduce carry weight. It also creates a distinctive profile that is shared with the smaller-framed Beretta Model 84 F in .380 ACP.

The Model 92 had its beginning in 1972, and it has evolved over the last 43 years into a variety of dedicated designs for special uses by civilians, the military and law enforcement agencies worldwide, with sales totaling well over 1 million. The current Beretta Model 92A1, M9A1, the new-for-2015 M9A3, along with other 92 Series variations, are also all available for the civilian market, which is reason enough to use the latest Umarex, Gletcher and Swiss Arms .177-caliber, blowback-operated 92 FS air pistols for cost-efficient practice.

Umarex has taken the Beretta Model 92 FS air pistol to even greater heights with every possible feature to make shooting the air pistol as realistic as a 9mm model—right down to magazines that carry the CO2 capsule and BBs in order to provide an actual loading experience, fully functioning ambidextrous thumb safeties, a locking slide and slide release, and a blowback-action slide. Every aspect of handling a 9mm is reproduced in accurate detail.

The guns feature all-metal construction with a 92 FS combat-style triggerguard, a modified accessory rail, a matte black finish, a DA/SA trigger, a manual safety (but no decocking feature) and a magazine release. In weight, the air pistols are 3 ounces heavier at 39 ounces, with matching overall lengths, widths and heights of 8.5 inches, 1.5 inches and 5.4 inches, respectively.

Both the Umarex and Gletcher Models have one other “unique” feature that not only harkens back to the most desirable and rarest of all Beretta 92 variants, but provides something that is all but impossible to possess in a cartridge-firing Beretta pistol: selective fire!

The new Umarex M92A1 and Gletcher 92 FS models are a hybrid of the 92 FS and the ultra-rare 93R. The “R” stands for Raffica, Italian for “burst” (as in burst of fire), and the guns were only produced for the Italian military and Italian law enforcement from 1979 to 1993. While not possessing the same exterior look as the 93R, which had a flash suppressor, a folding forward assist finger grip under the dust cover and an extended 20-round magazine, the all-essential safety lever on the Umarex and Gletcher models can be lowered to the Raffica position, allowing the pistols to fire full auto.

The 93R actually switched from semi-auto to three-round burst fire when the lever was pulled down to the rapid-fire setting, indicated by three white dots. The air pistols switch from semi-auto to full auto. With a little practice, burst fire is possible by feathering the trigger; otherwise 18 BBs are gone in seconds.

For handling, these air pistols provide the exact feel and operation of controls for firearms familiarization, including draw, thumb-safety release, sight acquisition, fire drills, reloading drills, both full reload and tactical reloads with spare magazines, and even mock clearing and second-strike practice.

Where the air pistols differ slightly is in the sights: a matte black front post that reads against a single white dot centered in the dovetailed rear sight. The new Umarex version has a rounded triggerguard corresponding to the Model 92A1. The DA/SA triggers work identically, with the first round fired in DA and the slide cycling back after discharge to cock the hammer and chamber the next BB. You can also cock and decock the gun manually.

Internally, you can think of the Beretta DA/SA models as a more sophisticated version of the Colt Model 1911 operating system, as the Berettas share the same CO2 design and use self-contained BB and CO2 mags for authentic handling.

All current holsters for the 92 FS also fit the Umarex, Gletcher and Swiss Arms models. For training on the 92 FS, you could not ask for a more accurate copy of the cartridge pistols than this trio from Umarex, Gletcher and Swiss Arms. Retail prices for the Model 92 FS ranges from $149 to $155, a mere fraction of the $682 MSRP for a Beretta 92 FS.

For the test of the Gletcher 92 FS, I used Gletcher CO2 cartridges and Hornady Black Diamond .177 steel BBs. While the air pistol features a 5-inch, smoothbore barrel, a 9mm 92 FS has a rifled barrel that’s 4.9 inches in length. Target distance for the gun was a standard 7 yards, which is nominal for blowback air pistols.

The pneumatic whine of the Gletcher 92 FS on full auto is almost intoxicating—.177 caliber BBs fire so rapidly the magazine is empty in only seconds, and that’s firing in short bursts. Loaded extra magazines are a must. The gun offers an excellent trigger system with a light SA pull and only modest effort for DA.

As for accuracy, the best 10-round group from 7 yards fired SA using a Weaver stance measured a modest 1.5 inches, with the tightest group of five steel BBs covering 0.56 inches. Firing the Gletcher on full auto kept all the BBs inside a 4-inch circle on a Champion Score Keeper target.

Contrary to the Swiss Arms pistol, the Gletcher 92 FS Auto does not allow the slide to lock back after the last round. With the Swiss Arms 92 FS, accuracy at 7 yards was not quite as tight as the Gletcher. The best 10-round group averaged 2 inches, with a best five spreading 1.27 inches. Average velocity for both 92 FS models was 330 feet per second (fps).

Compact Air Power Like the Model 92 FS, the Umarex 84 FS is an all-metal air gun that duplicates the external appearance right down to the marking on the left side of the slide and the handsome plastic Beretta emblem pistol grips. The only tell on this model is the CO2 key (used to raise the cylinder and pierce the capsule) hanging off the bottom of the magazine floor plate.

The air pistol’s SA trigger has a very long 0.75-inch pull that stacks up pretty tight before a crisp break drops the hammer and releases a single burst of CO2 to propel the BB downrange at an average of 360 fps. The slide locks back after the last round is fired.

The 84 SF has a maximum BB capacity of 17 rounds, and like the 92 FS, the 84 FS fits all existing Beretta 84 holsters. This is a handsome pistol that can be used for CCW training practice as well as learning basic pistol handling and safety. The blowback action gives the little Beretta a realistic feel, and with a weight of 23 ounces, an overall length of 7 inches and its all-metal construction, it has the heft and balance of a real .380. The slide release is fully operational, as is the ambidextrous thumb safety.

Using Hornady Black Diamond .177 steel BBs at a range of 7 yards from the 3.6-inch, smoothbore barrel, the best 10-round group printed 2.49 inches from center to center. This isn’t bad given the gun’s slide-mounted front blade and traditional dovetailed rear notch sights. With an MSRP of $99, it is a very affordable and enjoyable air pistol to shoot. Like all of the other blowback designs, every trip to the range with the air pistol is a training experience in handling cartridge-firing handguns.

One of the most intriguing of the Umarex Beretta blowback models is the Px4 Storm. At $120, the Umarex Px4 Storm is not only a BB gun but a pellet gun as well. It will shoot either projectile from its revolutionary dual-ended magazine, and it will have you shooting this 16-shot repeater as fast as you can pull the trigger.

The design uses an eight-shot rotary clip on both ends of the stick magazine, and it only takes a few seconds to hit the mag release, flip it over and start shooting again. Since it shoots BBs or pellets, there is also more flexibility with ammo and a higher degree of accuracy through the use of target-grade pellets.

A 12-gram CO2 cylinder is loaded into the grip and seated with a folding key that stores in the base of the grip frame. And for authenticity, there is an accessory rail under the barrel that will accept standard lasers and tactical lights.

The Umarex Px4 Storm has a blowback action, so it functions like the real 9mm pistol and there is even a Recon version, priced at $209, that comes with full tactical accessories, a mock suppressor, an accessory rail side mount to fit optics on top and a Walther tactical light on the left side. This is full tactical training pistol in size that duplicates most, though not all, of the Px4 Storm pistol’s controls. 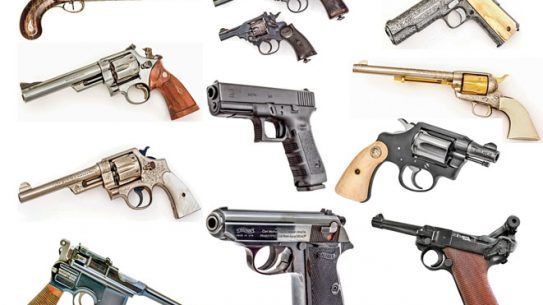 We salute the classics that have earned their rightful places in the Combat Handguns...