It will come as no surprise to readers that I am an avid action pistol shooter. At least three weekends every month I try to compete in matches held under the auspices of the United States Practical Shooting Association (USPSA).

USPSA matches have become so popular that several manufacturers now offer “off the shelf” guns that are suitable for Limited, L10, Single Stack and Production divisions. But Open Division is an entirely different game and today is dominated by custom-built pistols featuring every bell and whistle that their owners can envision and their bank accounts can afford.

Over the last 30 years I have competed in all of the USPSA divisions, but the last time I competed in Open Division the electronic sight was only beginning to make an appearance. I found these early sights to be large, cumbersome to mount on my pistol, not overly reliable and with restricted fields of view. I recently had the opportunity to try a pistol that the manufacturer feels provides shooters with what they need to get their feet wet in Open Division: Smith & Wesson’s M&P40 Performance Center Ported.

While several other makers offer versions of their polymer-framed pistols with modifications intended to make them more suitable for USPSA competition, the folks up at S&W wanted such a pistol and assigned the S&W Performance Center the task of improving the M&P to do just that.

RELATED STORY: Build Your Skill While Having Fun With The S&W M&P22 Compact

The longer barrel and slide provide better balance, a longer sight radius, recoil-dampening weight and higher bullet velocity. The barrel has a pair of elongated ports at the muzzle end, which vent powder gases upwards to hold down muzzle flip and reduce felt recoil. The slide has four ports machined into each side; the two closest to the muzzle are for venting powder gases from the ported barrel while the remaining half dozen keep the slide’s weight to an optimum mass for reliable functioning with a variety of loads.

The Performance Center sear, as well as polishing and fitting of the internals, reduces the trigger pull from the standard 6.5 pounds to 4.5 pounds and shortens the trigger’s reset distance.

At the rear of the slide is a plastic cover retained by two Allen screws. When removed, you see that the slide has been cut to allow the shooter to attach adapter plates to mount a half dozen optical dot sights: Trijicon RMR, Leupold DeltaPoint, JPoint, Docter, C-More STS and Insight Technology MRDS. Four adapter plates and four sets of screws come with the pistol suitable for mounting the six types of miniature reflex sights.

Because of the cut for the adapter brackets, S&W used a new style of fixed steel sights on the M&P40 Performance Center Ported. The front is a high square blade with a white-dot insert while the rear is a square notch with dual white dots. Both of the sights are mounted in dovetail cuts and can be drifted for windage adjustments.

S&W provided me with an M&P40 Performance Center Ported to evaluate. After fitting a medium-sized palm swell to the grip (I guess that means I’m an “average” shooter?), I grabbed a supply of .40 S&W ammo and beat feet to the range to see how it performed.

Being that I intended to use it to compete in Open Division, I mounted a Leupold DeltaPoint optical sight on the M&P, which proved straightforward and easy, even for someone as mechanically challenged and fumble-fingered as myself. The DeltaPoint was light, had a wide field of view and, as I would discover, proved rugged and utterly reliable.

I zeroed the DeltaPoint in at 25 yards with a rest, three brands of factory ammo and my regular match handload, and produced five-shot groups in the 2- to 3-inch range, with honors going to CorBon’s Performance Match ammo.

Setting up a pair of IPSC targets, I ran the pistol through a series of off-hand drills. Being that I have not used an optical sight in quite some time, it took me a bit of practice to get the hang of placing the bouncing little red dot on the proper area of the target before touching off a round. Thanks to the ported barrel, the pistol produced significantly less muzzle flip and recoil than my standard .40-caliber M&P, allowing me to make fast, accurate follow-up shots with ease.

Kitted out with a Safariland 5197 open-top holster and open-top magazine pouches, I ventured forth to a local USPSA match to try my hand in Open Division competition for the first time in almost two decades. 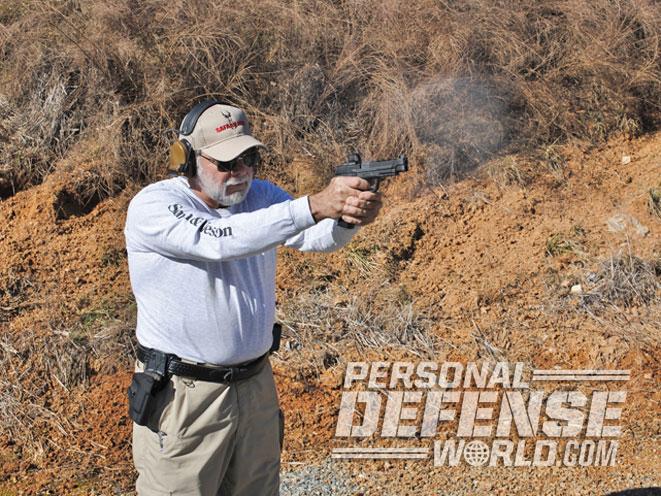 As I have said many times before, “The gun performed better than the shooter.” The S&W proved 100-percent reliable and muzzle flip and felt recoil were noticeably reduced from standard .40-caliber M&Ps, allowing me to make fast follow-up shots. The Leupold DeltaPoint sight provided a crystal-clear sight picture and a wide field of view that made target acquisition and transitioning very fast. And while my lack of experience with dot sights did not bother me with the closer targets, I must admit that some of the long shots on cardboard targets and steel Pepper Poppers required, well, shall we say more rounds than I had expected.

The M&P40 Performance Center Ported proved 100-percent reliable throughout the 120-plus-round match and, despite my less than sterling performance, I thoroughly enjoyed shooting it. If you would like to try your hand with a dot-sighted, ported-barrel pistol, all without the expense of building a custom gun, the M&P40 Performance Center Ported pistol would be a very practical, and affordable, way of doing it.