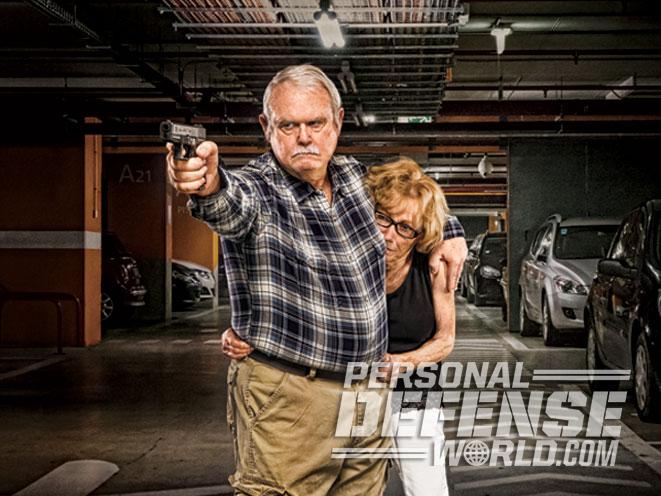 Tulsa, Oklahoma, businessman Doug Jandebeur is in his mid-80s, but he stays busy managing the warehouses and shopping center he owns on the city’s south side. One day, at closing time, he waited at his truck while his wife, Charlotte, was locking the office door. Then he felt the jolt of being shoved in the back by a teenage assailant.

RELATED STORY: ‘It Happened to Me!’: 15 True Gun Stories from Law Enforcement

“I figured it was one of my friends hassling me, but then he smacked me in the jaw,” Jandebeur recalled. “He got my wallet with about 60 bucks, but then he headed for my wife and he says, ‘Give me the money.’ Well, she slams the door in his face. She’s the hero because she didn’t get involved. She got out of the way, which allowed me to do my job.”

Jandebeur racked a round into his semi-automatic pistol. The teen subsequently turned, saw the gun and fled.

“He took off down the sidewalk, big old steps, running,” Jandebeur said.

A surveillance camera operated by one of Jandebeur’s tenants recorded the assault. Police shared the footage with Crime Stoppers and they got a tip. Officers later apprehended the 16-year-old suspect. He was a driving a stolen car, according to a police report, which also stated the suspect was in possession of three bags of marijuana and pills.

Jandebeur said he was pleased the suspect was caught, but he was also glad that he ultimately didn’t shoot the fleeing wayward teen.

“I feel like somebody probably let that kid down,” Jandebeur said. “But even a 16-year-old should have enough wisdom to know he’s not going to make it in the world going in that direction.” 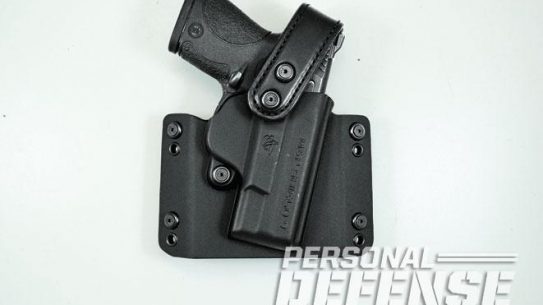 By adding a thumb break, Comp-Tac now has a concealed-carry holster with a leather...