Undercover cops working dangerous details carry backup guns, so why wouldn’t it be prudent for everyday, law-abiding citizens to do the same?

When lawyers set out to nail you in court after even the most justifiable defensive shooting, it’s not uncommon for them to use the “Rambo strategy.” The name comes from a character in movies filled with fistfights and shootouts, and the opposing counsel’s intent is to paint you to the jury as a violent person just waiting for a chance to hurt or even kill someone.

Does this mean you should sell all your guns and leave yourself helpless against criminal violence? No, of course not. It merely means that it’s incumbent upon those of us who keep and carry firearms to use common sense, and be able to explain to ordinary lay people why we do what we do. 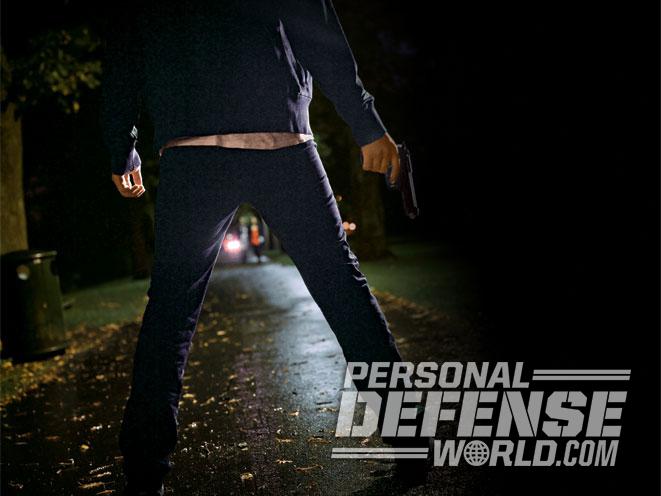 Case One: On the East Coast, a nice lady who didn’t much care for guns liked to tease her brother, who was a firearms enthusiast and worked as a security guard. She bought him, as a joke gift, a T-shirt that carried the message, “Killing Is My Business…And Business is Good.” He happened to be wearing that shirt on the day he was involved in a violent encounter. Did the prosecution make use of that, trying to show the jury a mindset of homicidal violence? Of course they did.

No one should need a gun magazine to figure out that inflammatory shirt slogans, bumper stickers and the like can be problematic, even to the point of opposing counsel suggesting that you provoked the confrontation by wearing such a thing.

Case Two: Did I say Rambo? Well, meet “Rambette.” The 26-year-old Virginia woman, whose name won’t be mentioned here because her case has not been adjudicated as of this writing, got into a dispute with another person on Facebook and posted a photo of herself with the message, “So you know the difference when u [sic] come find me.”

The problem was, in that selfie post she was pointing what appeared to be a pistol at the camera. Under a law passed in that state 15 years ago prohibiting online threats, the woman was subsequently arrested by police. She has already apologized and warned others, “Be careful what you put up on the internet. Facebook thugging is a crime.”

Case Three. Swaggering, blustering talk comes easily with an anonymous username on the internet, but it’s not as anonymous as some like to think. A fellow in Tennessee made it a habit to taunt police with open-carry stunts in public, going so far as to paint the flash suppressor on his AK-47 clone-pistol orange, and then even paint the gun orange. One local newspaper actually referred to him as the “Rambo” of the given neighborhood. He supposedly asked on the internet what 7.62x39mm round was best for shooting through police body armor. Not surprisingly, his concealed-carry permit was revoked. When he went to the hearing where he hoped to regain the permit, a huge pile of printouts of internet rantings he had posted under a username was waiting on the opposing counsel’s desk. Not surprisingly, he did not get his permit back. 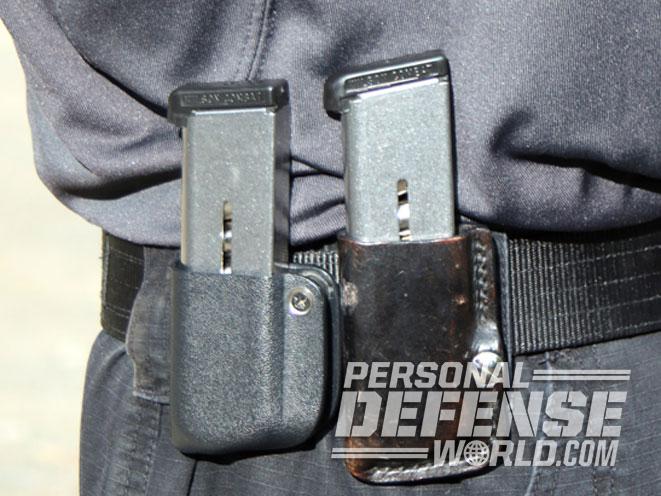 Case Four: The iconic Rambo image is of Sylvester Stallone standing bare chested and wielding an M60 machine gun with a belt of 7.62mm ammo draped over his shoulder. Don’t be surprised if those on the other side try to paint your carrying of spare ammunition as Rambo-esque. Famed appellate lawyer Lisa Steele is now working on Commonwealth v. Pepicelli, a case where two brothers, both licensed to carry, were convicted after what she considers a self-defense shooting. Among other things, the prosecution apparently alleged that their carrying spare ammo was evidence of an intent to go on a shooting spree, and the judge in the original trial did not allow expert testimony that would have established that carrying spare ammunition is a common, reasonable and logical practice.

Should that “Rambo attack” befall any of the rest of us, we should remember that spare ammo is recommended by experts partly because some gun malfunctions, whether revolver or auto, can only be rectified by reloading. The defensive firearm, by definition, is emergency safety rescue equipment, and the user must be able to keep it up and running. Moreover, there are several cases on record where armed citizen self-defense required many shots to stop the threat. In case your judge restricts that vital information, you will want to be able to articulate those good reasons to the jury yourself. 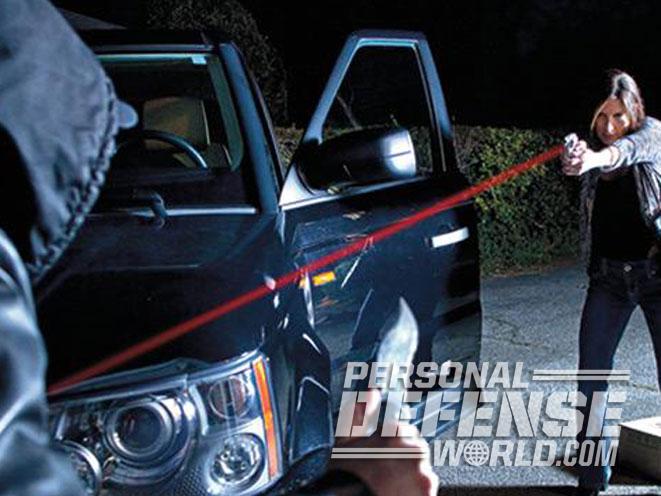 Anti-gunners think you must be Rambo if you want to carry a gun at all. Do you doubt that if you carry two they’ll try to make hay with it? I’ve seen it happen. The good news is, there are lots of good reasons to carry backup handguns, and once they’ve been educated via expert testimony, juries tend to be very receptive to these logical reasons. Here are a couple of cases in point.

Case Five: In May of 2015, Wayne Burgarello was found not guilty of murder or any lesser included offenses in Sparks, Nevada. He had happened upon on two people who were squatting in a building he owned. Burgarello stated that one of them appeared to be pulling a gun on him, and he opened fire. Five shots fired by Burgarello killed the male of the pair, and three wounded his female companion, who fled.

The prosecution made a huge deal out of the fact that Wayne Burgarello, who was licensed to carry, had armed himself with two guns: a 9mm semi-automatic pistol and a .357 Magnum revolver. The argument was that he was angry and had gone to that place to kill the squatters, otherwise he would not have armed himself that day with not one but two deadly weapons.

His defense attorney, Theresa Ristenpart, put witnesses on the stand who testified that they had been threatened with deadly weapons by squatters in the same place, and had decided to carry handguns for self-defense thereafter, just as her client did.

Ristenpart told the jury, “Wayne could have had 10 guns that day, and that is still lawful and legal.” After all, if one is in danger from violent humans, it is logical to go armed for one’s own defense, and if one can perceive a greater likelihood of danger, as Burgarello did, it is equally logical to arm oneself all the more heavily. The jury took less than seven hours to return their acquittal. 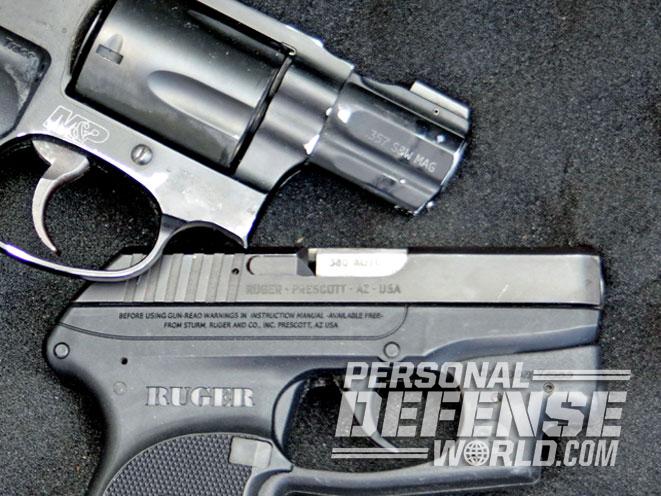 Case Six: Several years ago in the Tampa, Florida area, cabinetmaker Zane Britt was at home for dinner when he became aware that the burglar alarm had gone off in his shop. That had happened before. He drove to the shop expecting to find the police there and the intruders long gone. He was carrying a .38 Special snub-nose revolver. After all, an estimated 1.3 million concealed-carry permits have been issued in that state. Like many law-abiding citizens, he also kept a gun in his vehicle, in this case a .357 Magnum revolver.

Arriving at the shop, Britt realized the usual paradigm had changed in two ways. This time, the cops weren’t there yet—and the burglars still were! Out of a logical abundance of caution, he armed himself with the.357 Magnum revolver as well as the .38 Special in his pocket.

One of the burglars attacked him and went for Britt’s gun. After a failed attempt to keep away from his assailant, Britt had to shoot him. The man
died from his wounds. Zane Britt was subsequently charged with murder in the second degree.

Britt’s lawyer, Eddie Suarez, used me as his expert witness. When it came time to address the “two-gun defendant” issue, my simple explanation was as follows: it was redundant capability of safety rescue equipment. When someone is using a gun to fight for their life, it can break, malfunction, run out of ammunition or be taken away by the assailant, and in any of those cases, the second gun can be a life-saver, even though it didn’t have to be used in this particular case.

I pointed out that it was unlikely that any of us in the courtroom had driven to the courthouse in a car without a spare tire, that if any of us suffered a heart attack none of us would want to go to the hospital in an ambulance that only had one oxygen tank, and if we needed cardiac surgery while in that hospital during one of Florida’s famous lightning storms, none of us would want to be under the knife in a hospital that didn’t have an emergency generator in case the power was knocked out. The jury “got it.” It took them only about an hour to acquit Zane Britt on all counts.

Whether it’s born in cluelessness or malice, the “Rambo rap” is a tool widely used in both prosecution and plaintiff’s actions in court. Be prepared for it, and be ready and able to convince a jury of lay people that your possession and use of defensive firearms was responsibly carried out by a reasonable, prudent, responsible person—you!