by Clair Rees
in Guns, Shotguns
0

Stevens’ new 12-gauge Model 555 over/under is a fast-handling double-barrel shotgun built for winning on the range.

I’ve used Stevens stack-barreled scatterguns from Savage Arms several times in the past, and they’ve always performed well for me. They’ve always been solidly made and did the job at a fraction of the price you’d pay for higher-end double-barreled field guns.

The latest entry to this lineup is the new Stevens Model 555 over/under shotgun. It features a lightweight, scaled-to-gauge aluminum receiver with a steel insert reinforcing its breech. This innovation minimizes weight without sacrificing strength or rigidity. The 12 gauge I’ve been testing tips the scales at a hair over 6 pounds, a great weight for a field gun used to take pheasants, quail and other upland game. The gun is a delight to carry and comes to the shoulder effortlessly. Want something even lighter and handier to tote? A 20-gauge version is available that weighs a svelte 5.5 pounds.

The Model 555 has a modestly figured stock and forend of Turkish walnut. The wood is finely checkered, providing a firm, non-slip grip and greatly enhancing the gun’s appearance. Thankfully, the gun has a manual top-tang safety. Safeties that engage automatically each time the action is opened are a time-wasting pain that can cause missed birds during a covey flush. The gun also has chrome-lined barrels and a single, selective mechanical trigger. The trigger breaks at just shy of 4 pounds.

The gun doesn’t have automatic ejectors, which were once considered de rigueur on quality double-barrels. When I first began hunting upland game midway through the last century, automatic ejectors tossed fired hulls over your shoulder and well to the rear. Auto ejectors were regarded as a time-saving convenience when you reloaded. As a result, hunters left a trail of empty red or green shells as they moved through the fields.

Today’s hunters are more socially aware and pick up their empties as a matter of course (and to make sure they’re invited back to hunt those fields again). In addition to being unsightly litter, fired hulls can foul farm machinery. I was pleased that the new Stevens Model 555 dispensed with automatic ejectors. Fired shells are plucked from their chambers by hand, eliminating the necessity of hunting for them in tall grass. As far as I’m concerned, automatic ejectors are no longer desirable on a hunting shotgun.

Five interchangeable choke tubes are provided to meet any shooting need. I confess to installing an improved cylinder choke in the lower barrel and a modified choke in the other tube, but I otherwise left things alone. Loaded with an even ounce of factory 7½ pellets, the choked tube put 54 percent of its shot inside a 30-inch circle at 40 yards. The improved-cylinder barrel patterns at 46 percent. The patterns are evenly spread, which is more important than pellet percentages.

That combination does nicely for any shotgunning chore I have in mind, unless I attempt 27-yard trapshooting. And that’s not likely to happen anytime soon.

Fit For The Field 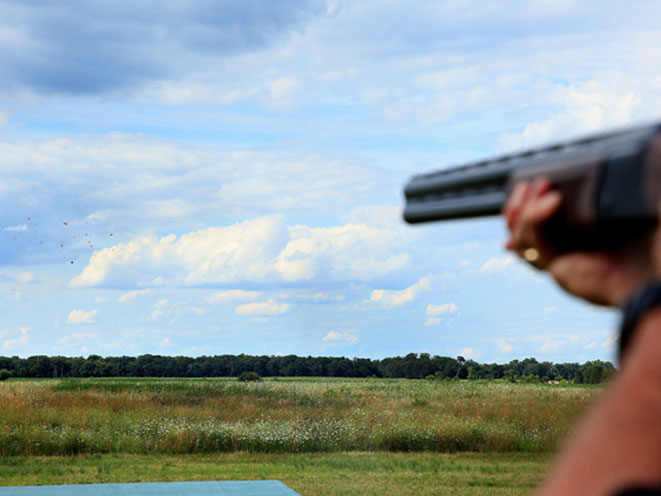 While rifles are carefully aimed and will produce reasonably good results even if stock dimensions aren’t ideally suited to your frame, shotgun shooting is another thing entirely. If a shotgun doesn’t fit you right, you’ll have a hard time connecting with clay birds or flying game. I have (should say “had”) a very nice 20-gauge over/under from a well-known manufacturer. I had difficulty connecting with that gun. If I concentrated—hard—I could sometimes scratch down a fast-winging target, but when I relied on stock fit and shooting instinct I usually came up short.

“You can’t hit anything with that gun,” my middle son often chided me. “Why don’t you admit the obvious and give the gun to me?” It took a couple of years, but his nagging finally wore me down. I gave the gun to him, and he couldn’t be happier with it. He says it fits him fine, and he proves it whenever we go afield or take on sporting clays.

The way a shotgun fits you is vitally important. Costly “bespoke” double-barreled guns are usually made to measure after fitting sessions at the factory. That’s part of the service when you fork over the price of a fine automobile as you place your order for such guns. That kind of luxury is beyond me, so when I find a reasonably priced factory gun that fits me—and looks good in the bargain—I celebrate my good fortune.

This gun is tightly fitted. When the shotgun is in battery, it locks up tighter than a bank vault. It feels solid and balances nicely between my hands. The satin-finished stock adds to the gun’s good looks. In spite of its bargain price, it’s a very handsome firearm. 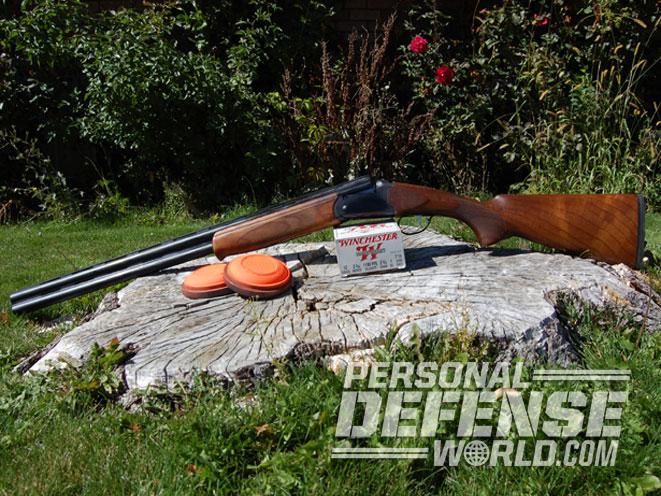 The 6-pound 12-gauge Stevens Model 555 has 28-inch barrels, a 14.375-inch length of pull and a 44.8-inch overall length. It drops 2.1 inches at the comb. A ventilated rib rides atop the barrel, while a second vent rib is squeezed between the upper and lower tube. This gun fits me well and is a natural pointer. I can hit things with it!

Upland game bird and waterfowl seasons were still a few months away when it was time to test the gun, but it did yeoman service on sporting clays. If I can hit my share of sporting clays, I’ll have faith in the gun when hunting season rolls around. The Stevens balances well between my hands and comes to the shoulder naturally. In short, it fits! That’s an all-important feature when it comes to scatterguns. The 28-inch barrels feel right and help with that all-important follow-through.

The Stevens Model 555 comes with 3-inch chambers. I wouldn’t advise firing too many 3-inch magnum loads in this gun. The gun should hold up just fine, but your shoulder might not appreciate the battering 3-inch magnums produce in a 6-pound shotgun. There’s a narrow rubber buttplate, but this is more useful for protecting the butt when it’s resting on the ground than for mitigating felt recoil.