Umarex and Colt have produced a Colt-branded 1873 Single Action Army BB gun that is absolutely perfect. I am not only amazed at the engineering that has gone into making this all-metal sixgun but at how accurately all of the Colt’s features have been incorporated into what is a 21st century reprise of those wonderful old Mattel “Fanner 50 Shootn’ Shell” SAA cartridge-loading cap pistols. The only difference is this one shoots .177-caliber BBs propelled by CO2 instead of a spring-loaded plastic bullet powered by a Greenie Stick’em cap. 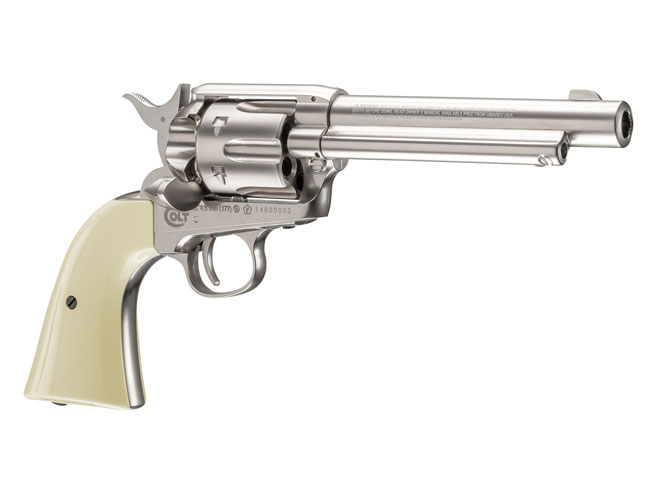 While it’s a little lighter than a real 5.5-inch-barreled Colt Peacemaker, the Umarex Colt Peacemaker has the same looks. Except for the addition of a manual safety hidden under the frame just forward of the triggerguard, at first glance this looks exactly like a nickel Colt Single Action. This is a dandy of a gun that will open up whole new avenues for Cowboy Action Shooters to practice quick draws, shooting from the hip, pistol handling and target shooting at close range, all without the expense or cleanup of black powder or smokeless powder .45 LC rounds or wax bullets. 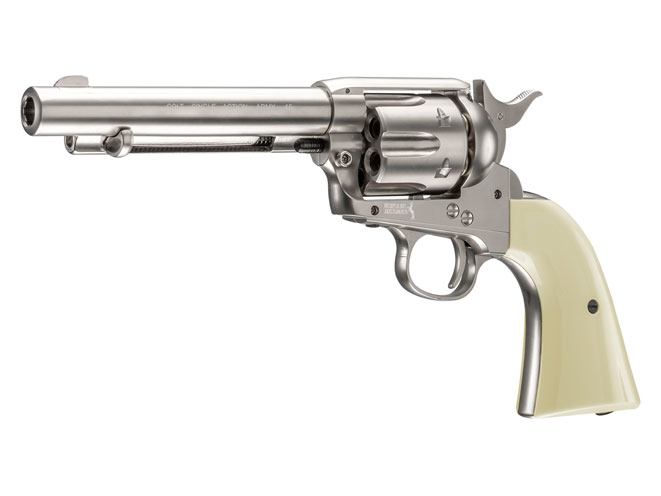 Dimensionally, this BB gun is nearly dead on. The rebounding hammer feels different and noticeably lighter as there is no actual Colt-style mainspring and the hammer sits slightly back from the frame at rest. Cocking the gun follows normal SA operation by rotating the cylinder to the next chamber, preparing the gun for the CO2 capsule stored inside the grip to release a single charge that’s sealed to the back of the BB cartridge and send the .177-caliber round downrange at around 410 fps.

Unlike some of the BB cartridges in use, the Colt loads the BB in the base of the cartridge (where the primer would usually go), so the air pressure does not have to travel the length of the cartridge case before sending the BB downrange. The brass bullets also look more authentic. Though not .45 LC is size, they are more like a .32-20 Winchester round, which Single Actions were chambered for beginning in 1884. The gun is accurate in its dimensions and fits any SAA holster. Suggested retail is $150 and six extra BB cartridges sell for $10.