Three years ago, Ruger rolled out a totally new centerfire rifle called the American. With a price of $449 it obviously wasn’t meant to be a replacement for the company’s flagship Model 77 Hawkeye, the least expensive model of which went for exactly double that amount. I mean, people looking to buy a $450 rifle represent a totally different market segment than those shopping for a $900 rifle.

The rationale for the American, then, was that Ruger had no representation in the much larger market of “value-priced” bolt-action rifles like Remington’s Model 783, Marlin’s X7, Savage’s Axis or Mossberg’s ATR, all of which sold in the $350 to $450 range. It was simply too large and too lucrative a market for Ruger to continue to ignore.

So, Ruger applied the same reasoning to the bolt-action rimfire market, where the same situation existed. The least expensive Ruger Models 77/22 and 17/22 listed for $899, and the five other models in the line went for $969; that’s roughly two to three times what many “value-priced” .22s sold for. And the market for rimfire rifles selling for $1,000 is even smaller than for equally priced centerfires. Enter the Ruger American Rimfire, a gun whose price of $339, puts it smack in the middle of the “everyman” market.

One look at this gun and it’s immediately apparent that this little .22 was designed to have a strong family resemblance to its big brother. The silhouettes of the two rifles are strikingly similar, right down to the bolt shroud, which matches the sloping rear angle of the receiver and blends into the top line of the grip. And both guns also employ a two-position tang safety, which of course is the most ergonomic of all.

The stock is made of polycarbonate that’s been injection molded around an aluminum V-shaped bedding block that engages flats milled into the underside of the receiver ring at the 5 and 7 o’clock positions. A second bedding block supports the rear of the receiver, but is U-shaped to conform to its tubular shape. Only the receiver is bedded; the barrel is free-floated the entire length of the forend. The American Rimfire’s big brother employs a similar receiver bedding system but uses two steel V-blocks fore and aft. Deep flutes at the upper side of the forearm are accented with textured grip strips (for lack of a better term), as is the grip itself.

The butt section of the stock has what at first glance looks to be a purely cosmetic feature consisting of a narrow channel that follows the comb line and then curves downward at an angle roughly parallel to the butt. Actually, it is meant to impart a distinctive look to the gun, but it is far more than a mere cosmetic touch. It’s also a seam line formed by the fact that the stock’s butt section is a two-piece affair. By unscrewing the sling swivel stud, the butt/comb portion of the stock pulls off and can be replaced with a Monte Carlo version that is supplied with the gun. The latter raises the comb (and the shooter’s line of sight) 0.75 inches. One therefore has a choice of comb heights for iron sight or scope use. Pretty clever.

The American Rimfire is being offered in .17 HMR, 22 LR and .22 Mag, and quite predictably it employs the excellent rotary magazine that’s used in its more expensive siblings: the M77/17, the M77/22, and the Ruger 10/22 semi-auto. Instead of the recessed release latch used in the other guns, this one has a military-style lever that extends down 0.5 inches from the belly of the stock for faster, more certain access. A forward push with the forefinger releases the magazine; on replacement, it snaps into place with a satisfying sound and feel. The projected release lever may not look as good as the other guns mentioned that employ the recessed latch, but I like this system better.

Turning to the heart of the gun, the receiver is turned from tubular bar stock — also predictable when trying to keep costs down — but two wide flats at the 10:30 and 1:30 positions on either side give the impression of an octagonal receiver. It’s so much more attractive than a straight tube, and it cuts weight as well. The top of the receiver is dovetailed to accept standard tip-off rings, but it’s also drilled and tapped to accept Weaver #12 bases, so the scope mounting options are many.

Instead of utilizing the trigger sear as a bolt stop, as so many rimfire rifles do, the American Rimfire has a dedicated bolt stop/release just like a centerfire rifle. This simple, pivoting lever also acts as a bolt guide because the nose portion of it that intrudes on the bolt raceway engages a lengthwise slot on the left side of the bolt, keeping it from freely rotating when not in battery. Most “fat bolt” centerfire rifles employ this same multi-function bolt stop/release guide, and its big brother, the Ruger American, is one of them.

As for the bolt itself, it’s pretty conventional in that it employs a semi-circular C-spring at the head of the bolt to power the extractor on the right side of the bolt face and the tensioner on the left side. As the bolt moves rearward, the tensioner keeps the empty case (or cartridge) aligned with the bore until it makes contact with the ejector and is kicked free of the loading port. The locking system is also quite conventional in that the root of the bolt handle acts as a singular locking lug when its downward movement engages a slot on the lower right side of the receiver. Bolt rotation is only 60 degrees, so there’s plenty of clearance for the hand if a scope is mounted. 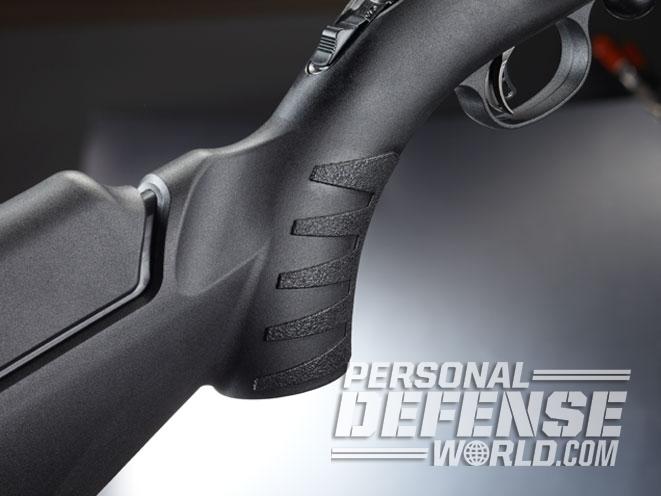 Both the .22 LR and the .22 Mag operate at the maximum average breech pressure of 24,000 psi, so when this rifle was first introduced only in those two calibers, I wondered whether the action was strong enough to handle the .17 HMR, which operates at 26,000 psi. Well, that question was answered last year when indeed the .17 HMR was added to the line. I doubt, however, that it can handle the .17 Winchester Super Magnum, which churns up some 33,000 psi. Keep in mind that Savage had to come up with a totally new rimfire action, the B-Mag, to handle what is now the most potent rimfire cartridge ever.

Our test gun was chambered in the good ol’ .22 LR. The entire fire control system — the Marksman user-adjustable trigger and the tang safety — are all anchored to a casting that is cross-pinned to the receiver. The adjustment range on the trigger is 3 to 5 pounds, and on the test gun it broke at just over 3 pounds, so I left it alone. It should be noted that there is no visible means to check whether the action is cocked or not. In other words, when in battery, there is no “tail” on the cocking piece jutting out from beneath the bolt to indicate the status of the action.

As mentioned previously, the American Rimfire comes standard with iron sights—a Williams folding leaf rear that is adjustable for both windage and elevation, though the former requires drifting the sight within its retaining dovetail. The front sight consists of a highly visible green fiber optic. As the 22-inch-barreled test gun came from the box, it measured 41 inches in overall length and weighed exactly 6 pounds unloaded. 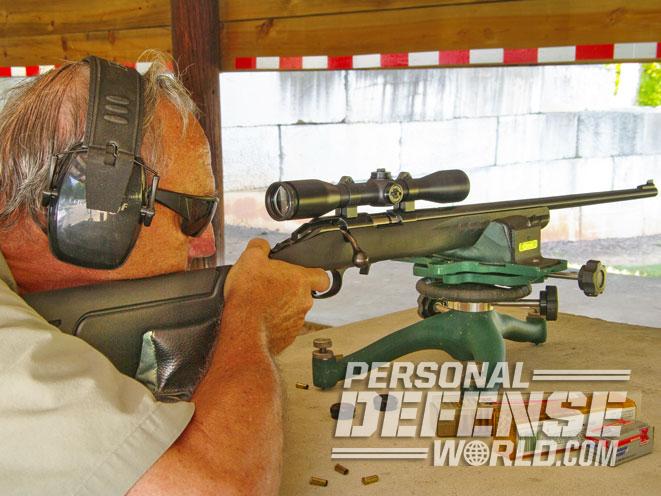 To ready the gun for a little range work, I mounted a Bushnell Banner 4×32 rimfire scope using Talley’s excellent tip-off rings. I think most shooters will go this route instead of using Weaver bases, even though that would make the scope mounting options far greater. Having rings that clamp directly to the receiver, thus eliminating separate bases, just makes more sense.

This was the first .22 LR rifle I’ve tested in quite a long time that did not shoot its best with match ammo. The Federal Gold Medal Ultra Match came close, but the Winchester Super-X Power-Point hollow-points (HPs) edged it out by averaging exactly 1 inch for five 5-shot groups from the 50-yard line. The Gold Medal fodder averaged 1.15 inches, and the CCI Green Tag 1.2 inches. I think I could have done a bit better if the little Banner had a finer reticle. As it was, it subtended more than 0.5 inches at 50 yards, and that, combined with only a 4X magnification, accounted for some aiming error, though not much. 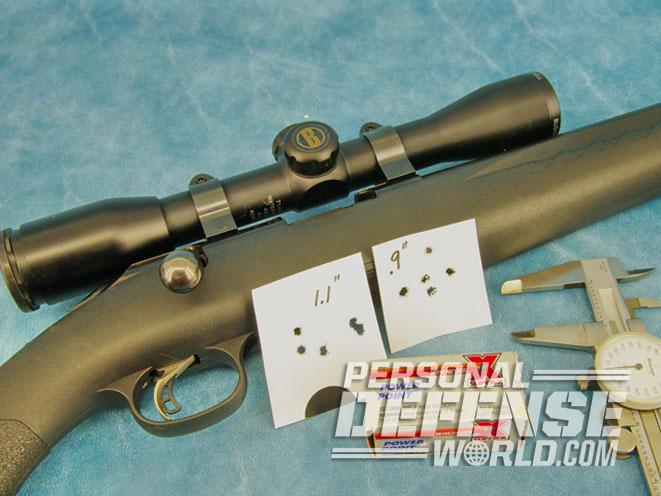 All in all, this Ruger American Rimfire is a sound, well-made rifle that doesn’t pretend to be anything but what it is—a no-frills, everyday working rifle that would be at home as a barn gun, on a trap line or in the back of a pickup. It’s also a rifle that won’t be welcomed by the other players in the “value-priced” .22 bolt-action marketplace.

In closing, it should be noted that there is also a compact version of this gun that comes with an 18-inch barrel and two stock modules, both of which provide a shortened length of pull of 12.5 inches. The result is a youth-sized carbine that weighs just 5.25 pounds unloaded.

For $19.95, accessory stock modules are available from Ruger that enable one to have all four of the possible pull-length and comb-height options, enabling the gun to adapt to the needs of growing shooters. Each model is now also available with a threaded muzzle and thread protector for those who wish to mount a sound suppressor or other muzzle devices.