I read a quote online recently that I think is sage advice: “First have a gun, be willing to use it and worry about the caliber later.” I believe that says it all. And while some calibers are more suitable for self-defense use than others, no matter what the caliber, if you don’t have the gun on your person when you need it…well, enough said.

Some of the most concealable and easy-to-carry pistols come from North American Arms (NAA). Started in the early 1970s, NAA makes a series of .22 WMR mini revolvers that have applications as deep-cover concealment pieces and backup guns. They can even serve as primary self-defense tools if need be. In recent years, cartridge manufacturers have really stepped up to the plate by providing .22 WMR cartridges with modern bullet designs. They’re formulated for use in short-barrel handguns and have given this round greater effectiveness, making it more viable for lethal-force situations.

For carrying your mini revolver, NAA has no less than 26 holster designs for the guns mentioned here. They include pocket holsters, inside-the-waistband (IWB) holsters, belt holsters, a shoulder holster and even a belt buckle! Here are some of NAA’s top offerings for concealed-carry self-defense. 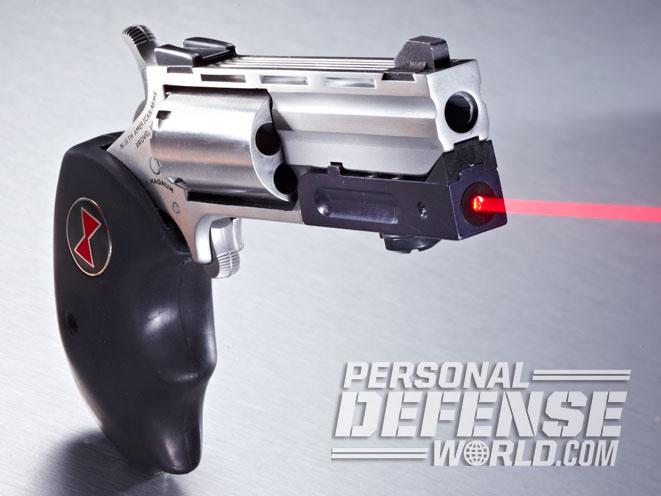 A distinctive NAA mini with a lethal name is the Black Widow. While it shares some of the features of the standard mini and Pug, it has some unique features all its own. For starters, it has a 2-inch barrel with a rib on top, into which are dovetailed front and rear sights. An elevation-adjustable rear sight is also available. Like the Pug, the Black Widow has the cylinder-pin shroud and “pull-down/turn” release. Thanks to the revolver’s longer barrel, you can also add the Venom laser sight to the Black Widow. This aluminum device replaces the cylinder-pin release and has an integrated Class IIIA, 5mw red laser. The laser will run for five hours in constant-on mode and 10 hours on pulse mode. It’s less than 2 inches in length and adds only 0.63 ounces to the revolver’s overall weight. 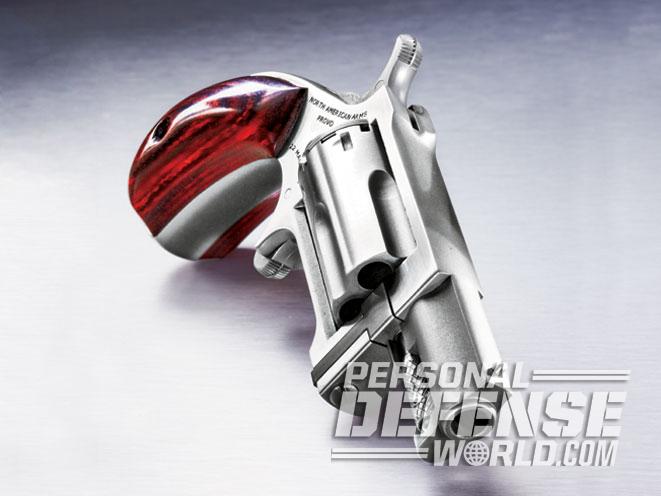 As dangerous as the rattler it’s named after, the Sidewinder is one of the newest mini revolvers from NAA. It offers what no other mini revolver can—faster reloads due to its swing-out cylinder design. All other mini revolvers require the cylinder to be removed for loading/unloading, but not the Sidewinder. The hammer is placed on half-cock, the ejector rod is pulled forward and the cylinder is swung out to the right (yes, the right). Then the ejector rod is used to kick out the expended cartridge cases. Fresh ammunition is inserted into the chambers and the cylinder closed. I doubt you’ll need a fast reload if you have to resort to a mini, but it’s a good thing to have the option.

Like most NAA minis, the Sidewinder is a single-action (SA) design, and it features a five-shot cylinder, a spur trigger, fixed sights and laminated wood grips. The revolver is constructed of stainless steel. It can also be had with a .22 LR conversion cylinder to allow for less-expensive practice. Note that the rear of the cylinder has tiny “windows” to allow the user to see a bit of the cartridge rim, a loaded-chamber indicator so to speak. 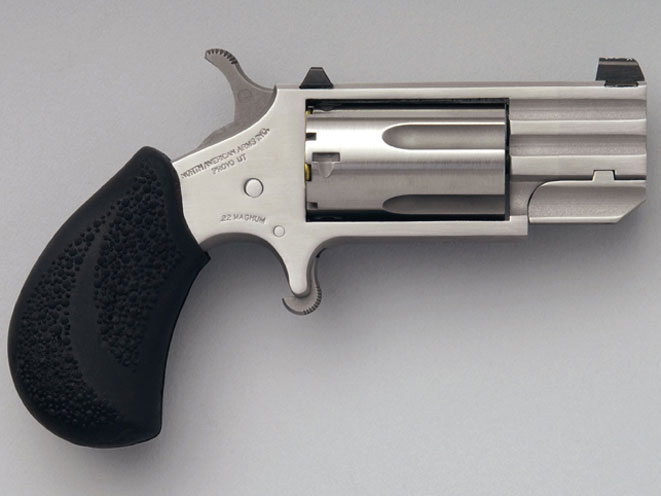 The NAA Pug is a .22 WMR mini revolver with a name that aptly describes the gun. In its basic form, we have a 1-inch but heavy barrel with what amounts to an integral cylinder pin shroud below it. Grooves atop the barrel and topstrap reduce glare, and the Pug is fitted with easy-to-see front and rear white-dot sights for improved accuracy potential. For just a few dollars more, you can get a tritium front sight with a white outline for daytime shooting. Instead of the standard ejector rod/cylinder-pin release, the Pug has a “pull-down and turn” release that melds into the barrel unit. The release action takes less fine motor skills to operate, allowing the shooter to get the cylinder out easier. Slightly oversized, pebble-textured, rubber grips provide for a better hold on the Pug for rapid-fire shooting. 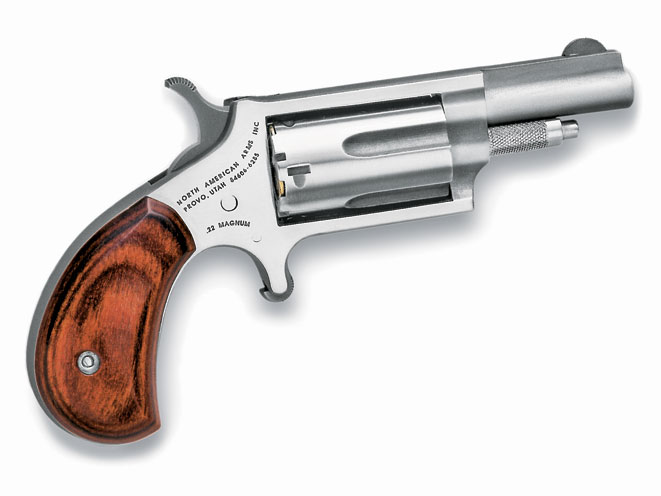 This is your basic, no-frills mini-revolver. It’s much like the Sidewinder, but the cylinder has to be removed for loading/unloading. A small spring-loaded nub on the end of the ejection rod is pressed in and this unloads the rod, allowing it to be removed and the cylinder pushed out of its window in the frame. The rod can then also be used to push the empty cartridge cases out of the cylinder chambers. The cylinder is loaded and replaced; the ejector rod is then re-inserted. Another commonality among NAA’s mini revolvers is the safety notch on the rear of the cylinder. The hammer nose can be lowered into a safety notch so the nose is not resting on a cartridge rim, which could cause an accidental discharge. An interesting accessory for the mini-revolvers is the Holster Grip. It replaces the wood grips and the mini folds into the grip like a folding knife with a pocket clip on the side. Closed, it looks much like a folding knife clipped inside your pocket, but when folded open, the Holster Grip becomes a grip!