Glock has rocked the concealed-carry world again with its new G43, a single-stack 9mm that holds 6+1 rounds and features all of the same attributes that make Glock pistols so reliable, accurate and unstoppable. It’s only 1.02 inches wide, making it extremely easy to carry discreetly.

In the early 1980s, when the original Glock 17 pistol hit our shores, we Americans did what we sometimes do best: We demanded a version that better suited our needs. The first cry was for something in a larger caliber than the original 9mm, and a quarter-century ago, Glock answered that call with the G21 in .45 ACP, the G20 in 10mm and the G22 in .40 S&W.

More demands followed. Glock answered them with smaller and still smaller models. This included a .357 SIG pistol and, in January of 2014, a super-small .380 ACP, the G42, that was literally pocket sized. In the subsequent calendar year, Glock shipped enough 42s to make a visible impact in the concealed carry market. And through it all, virtually all the way through the epoch of the Glock pistol in the USA, there was the cry to “Give us a super-concealable, single-stack version of the 9mm Glock!” That plaintive wail grew more insistent when the smallest of the baby Glocks, the G42, came out in .380 ACP instead of full-power 9mm. In 2015, Glock answered the demand. Behold, the new Glock 43.

As the cries for a Glock 42 in 9mm reached fever pitch, I found myself struggling to stay quiet. The reason was that, before the first prototype was in my hand well before the March 20, 2015 release, a Glock factory insider had told me, “Take your Glock 42 .380 that we introduced earlier this year. Lay it flat on a piece of paper. Trace it with a pencil. That will be the shape of the Glock 43 in 9mm.” That person had told me the truth.

RELATED STORY: 12 New Holsters and Accessories for the GLOCK 43

In the first quarter 2015, a few of us who write about these things went to the Glock factory in Smyrna, Georgia, and the nearby Glock Professional indoor shooting range to test-drive the G43. While it wasn’t a “baby Glock” G26 that had been trimmed down, it instead felt more like the Glock 42 on a rather mild dose of steroids.

Cartridge capacity for the G43 is the same as the G42 with six in the magazine and a seventh safely in the chamber, only the cartridges are bigger and so, necessarily, are the dimensions of the gun. Slide width is under an inch at 0.94 inches. The internals, once again, have more in common with the .380 ACP G42 than with the larger caliber Glocks. The pistol comes with two magazines, one flat-bottomed for maximum concealment, which will leave the pinky finger of most hands tucked under the butt, and one with a floorplate flange that gives that bottom finger a solid grasp. (It will make reloading easier, too.) The handling and manipulation of the pistol, the “manual of arms,” is familiar Glock all the way.

The G43’s weight is a feathery 17.95 ounces unloaded. This is wonderful for concealed carry, of course, but lighter guns kick more. Glock has proven that it can change paradigms, but no one can change the laws of physics. However, we shot the G43 with standard-pressure 115-grain FMJ ammunition from various manufacturers and recoil was not bad at all. Obviously, it jumps and impacts the hand more than the .380 ACP—it’s the full-power version of 9mm, after all, and not 9mm Short—and it “kicks” more than the wider-gripped, heavier G26 in 9mm, which is something I can say after shooting the G43 and G26 side by side.

RELATED STORY: 8 Night Sights, Lights and Lasers For The GLOCK 43

Shooting two-hand slow fire at 7 yards from a standing position, it was possible to put almost every shot into one hole. I’m looking forward to getting a test sample to my own range and putting it on the 25-yard bench. 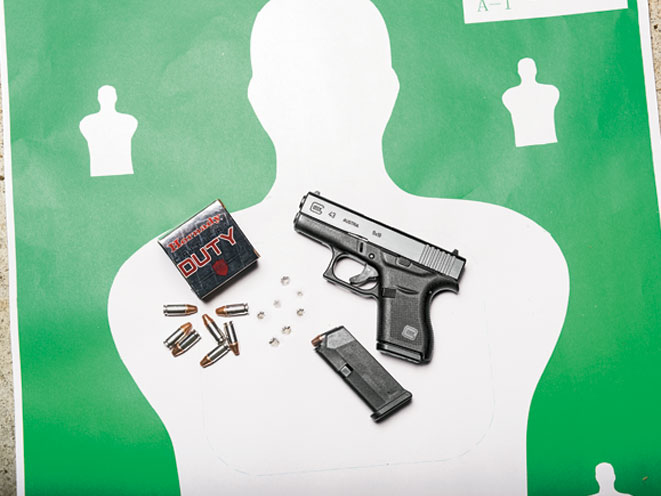 Big guys shot it, average guys shot it and, perhaps more important, gun-savvy women shot the G43. And 5-foot-tall pistol champ Gail Pepin from the ProArms Podcast said it all when she exclaimed, “I want one of these!”

I put about 100 rounds through one G43. That included dominant-hand-only, non-dominant-hand-only, deliberate limp-wristing and even shooting the G43 upside down. There were no malfunctions. For a gun that might be used for defensive purposes in a compromised position or while its operator is seriously wounded, that’s important. 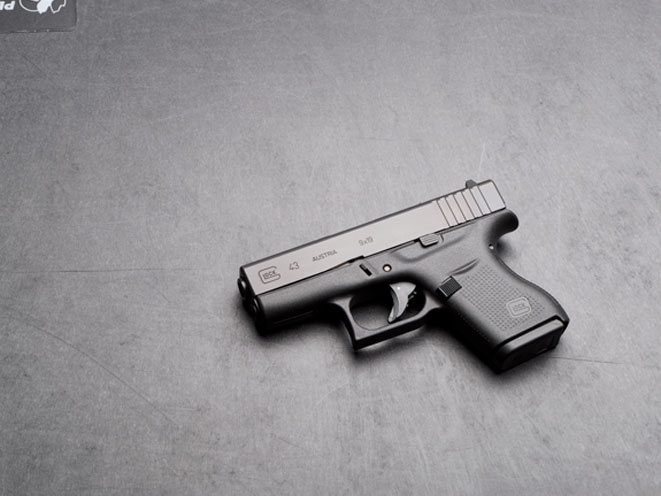 We saw several hundred rounds go through multiple Glock 43s. There were no malfunctions I could attribute to the gun. A single misfire appeared to be due to a bad cartridge.

What’s obvious is that the G43 is the slimmest 9mm pistol Glock has ever produced, and the lightest and the most concealable. Less obvious, but even more important for some, is the pistol’s “trigger reach,” or the distance from the backstrap to the trigger. It is here that we find the most significant measure of “shootability” for many people, depending on their hand size and finger length.

Speaking subjectively, this writer has found the standard-sized Glocks are “dimensioned” for the adult male hand, with the gun’s barrel in line with the long bones of the forearm and the pad of the distal joint of the index finger on the trigger. Shorter fingers can still reach the trigger adequately for control with fingertip pressure on the trigger. However, many of us prefer to place the finger on the trigger with the distal joint of the index finger centered, for more leverage. This is the spot on the finger that double-action revolver experts have called the “power crease.” 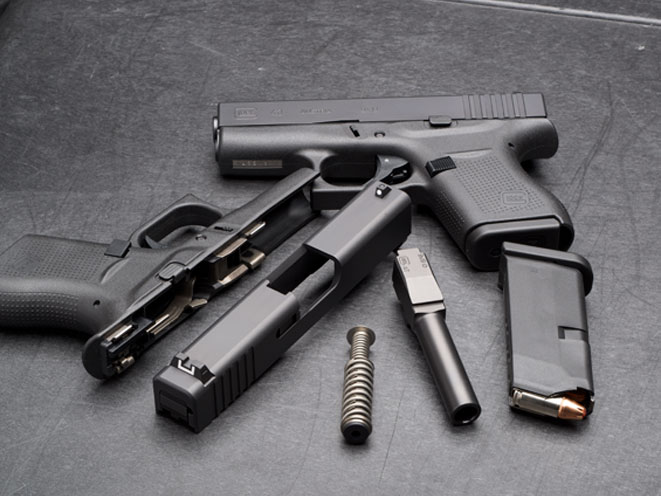 On the relatively tiny Glock 42, that reach is a very short 2.40 inches. For my own average-sized, adult male hand, this is so short I have to grasp the gun differently and consciously pull my finger outward from the triggerguard to get proper trigger reach at the distal joint. I’ve been shooting the G42 in the “Pocket Glock” event at Glock Sport Shooting Foundation (GSSF) matches since early 2014, and generally placing in the top five and even winning one such match (Clearwater, Florida, January 2015). But through all this I was fighting the pistol’s too-small-for-me dimensions. The Glock 43 in 9mm, however, has a trigger reach dimension of 2.56 inches, and that’s just enough for me to comfortably put the distal joint of my trigger finger exactly center on the Glock 43’s trigger, the “sweet spot” as it were.

RELATED STORY: Glock 42 vs. Glock 43 – How the G42 Stacks Up For Personal Defense

As soon as the G43 went on sale, it became acceptable in the Pocket Glock category at these GSSF matches, and I’m looking forward to shooting one in that competition arena. I managed to win a certificate for a Glock pistol (in the Pocket Glock category with my stock G42, oddly enough) at the 2015 match in Orlando, and the gun I’m going to order for my prize is…a Glock 43 in 9mm.

VIDEO: One of the Smallest Guns Ever Just Got Tested on Instagram