The P30SK is the first subcompact variant of the hammer-fired, polymer-framed HK models. It has an overall length of 6.42 inches and height of 4.57 inches. Shown with a CT Rail Master Pro.

Heckler & Koch has always catered to a variety of end users from civilians to military and law enforcement by offering certain models in multiple variants, like its P30 series, which is offered in V1, V2 and V3 configurations. As categorized by HK, the V1 is an enhanced double-action-only (DAO) design with a light trigger pull, or Law Enforcement Modification (LEM), which makes this version much faster to get into action than traditional DAO semi-automatics or revolvers.

As required by some law enforcement organizations, a light trigger is not approved, thus HK has the V2 LEM with enhanced DAO functionality and a standard-weight trigger pull. Finally, there is the V3, a traditional double-action/single-action (DA/SA) model with a hammer spur for manual cocking and a manual decocker.

The V3 DA/SA mode is also available with or without an ambidextrous safety. Other ambidextrous controls shared among all P30 models include dual slide and magazine release levers, the latter being integrated into the bottom of the triggerguard. All three Heckler & Koch P30 versions share an automatic hammer safety and firing pin safety, and there is a prominent red line loaded-chamber indicator on the extractor that protrudes from the right of the slide. 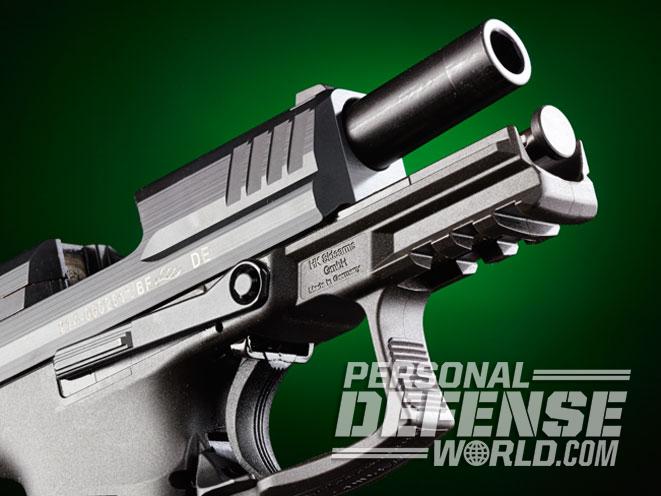 Among the features that the P30SK shares with the other two HK models is the grip design, which not only allows replacing the backstrap (small, medium and large) but changing the side panels (also in three sizes) to create a grip contour based on an individual’s overall hand size. The P30SK is also offered in all three trigger firing modes, including the enhanced LEM modification, which on the P30SK has the light strike V1 setup configured to provide an average trigger-pull weight of 5.4 pounds. Another positive feature in my book is that the P30 models do not employ a magazine disconnect, so the pistols will fire a chambered round with the magazine removed.

One of the smallest of all Heckler & Koch handguns, the new P30SK is well suited to plainclothes and undercover use by law enforcement, as well as discreet civilian concealed carry. The SK comes equipped with three-dot tritium combat night sights that are fast to align under any lighting conditions, and being dovetailed, they are easy to adjust to fine tune accuracy. And even with its shorter frame, the P30SK’s three-slot Picatinny rail remains long enough to mount a weapon light or light/laser combination like the Crimson Trace Rail Master Pro.

I used two types of belt holsters. First was the traditional pancake-style Galco Combat Master, one of the most practical belt rigs on the market. The Galco is a contoured, premium steer hide holster formed to the shape of the gun, allowing for an open-top design that keeps the pistol securely held in place but quick on the draw. It also has an advantageous butt-forward cant and full slide and barrel coverage.

DeSantis is about the fastest holster maker around when it comes to getting designs up and running for new models, including the P30SK. For this gun, DeSantis has adapted one of the most accepted carry rigs in law enforcement and the private sector, its #001 Thumb Break Scabbard. The HK rides high in this rig and is presented at an optimum draw angle (forward cant). The thumb-break design and exact molding, along with a tension device, allow for a secure and highly concealable carry while still providing a quick draw.

As a holster maker for law enforcement, Gene DeSantis has always been a big proponent of the thumb-break style. The new HK model has 1.75-inch belt slots, is available with or without suede lining, and in a plain or basket-weave finish. The deluxe lined and basket-weave versions are a special order but are worth the wait. 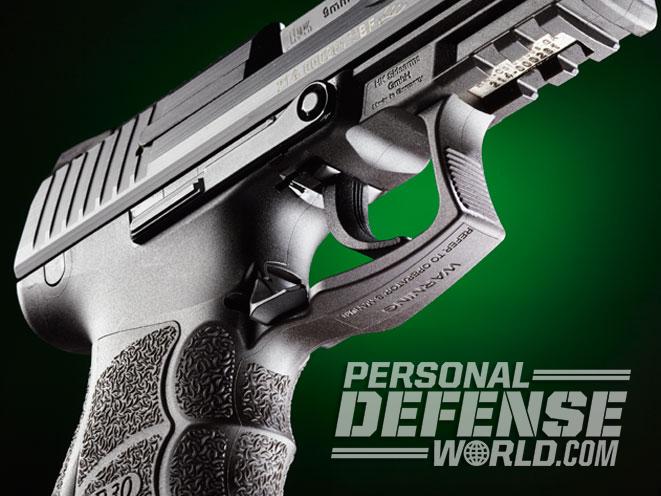 The test gun was the V1 Light LEM DAO version with three 10-round magazines and tritium night sights (a $100 upgrade). The gun had an average trigger pull of 5.84 pounds (once the slide has been cycled and a round chambered), with a length of pull measuring 0.875 inches, no stacking, zero overtravel and a quick reset and positive “click” felt through the trigger finger.

Since the LEM trigger is an enhanced DAO there is no decocker with the V1 or V2 variants. Once a round is chambered, trigger resistance is reduced. However, in the event of a failed primer, the second-strike capability increases trigger pull to full DA weight with an average resistance of 11.4 pounds, as tested.

The large-sized backstrap and side panels fit my hand perfectly—the P30SK has superb balance, with the back of the frame resting firmly over the web of the shooting hand, the second and third fingers solidly engaging the frontstrap grooves and the little finger resting securely beneath the magazine floorplate. The curved, serrated front edge of the triggerguard provides a solid resting place for the support hand’s index finger if you employ this type of hold to leverage more recoil control. (The author has found that this works best using an Isosceles or Strong Isosceles stance).

Among other P30 features that carry over to the P30SK is the elongated, ambidextrous slide release, which make reloads seamless. The left slide release also functions as the takedown lever for disassembly, and best of all, it does not have to come completely out, just far enough to allow the slide to be pulled forward off the frame. The dual captive recoil spring and guide rod assembly with its integral camming piece at the rear easily lifts off the barrel’s camming lug with a light forward press and requires no exceptional effort to compress the recoil spring. It’s one of the easiest field-strips around.

Both 124-grain loads have surprisingly moderate recoil in the HK, and even the Critical Duty felt lighter in this pistol than in a few other 9mms I’ve recently tested in the short-barrel-length category (2.75 to 3.5 inches).

The LEM trigger is, in a word, excellent, with a light and consistent pull shot to shot. Combined with the three-dot combat sights and lower-than-expected recoil, target acquisition is quick—and the gun is accurate. Though I found myself having to hold under by about 3 inches to hit my intended POA, once dialed in, groups were tight and getting tighter.

With Sig Sauer, the best five-round group measured 1.23 inches. Federal had a slighter wider spread of 1.5 inches, and the 135-grain Critical Duty had a best group measuring 2 inches, all in the X bull with one center punching the X. All shots were fired off-hand at a Speedwell B-27 silhouette target from a range of 15 yards using an Isosceles stance and a two-handed hold.

This is a fast-handing gun from the holster to the target to the workbench for cleaning. With a suggested retail of $819 as tested with tritium night sights, this is a reasonably priced handgun considering its features, accuracy and handling ease. Well thought out like all Heckler & Koch handguns, the P30SK adds another notch in HK’s grips.