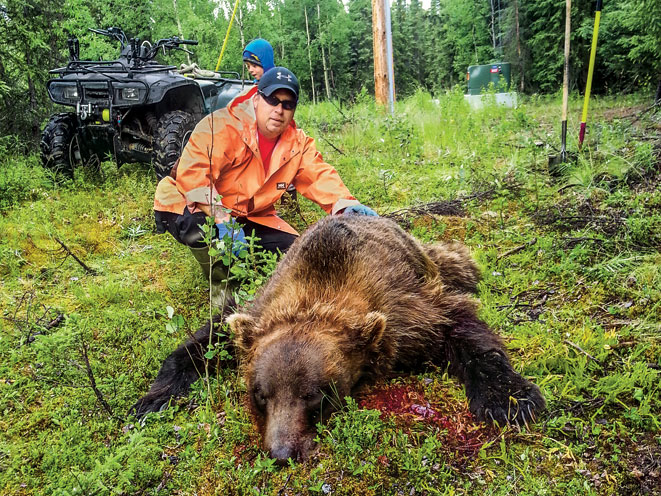 Jim Landess shows the brown bear he took with a .45 ACP pistol in 2014 at his home on Alaska’s Kenai Peninsula.
Comment(s)

Sergeant Ken Acton of the Alaska Wildlife State Troopers believes the .45 ACP is not the best option for bear country. Jim Landess agrees. Being a resident of the Kenai Peninsula on Alaska’s southern coast, he sees plenty of bears, especially during the summer salmon runs. But one night in July 2014, .45 ACP was what Landess had to defend his home near Sterling against a prowling, aggressive brown bear.

RELATED STORY: What You Need To Know About Animal Bites

At around 3:30 a.m., Landess heard loud pounding that, according to him, “shook the whole house.” His teenage son, Montana, looked out a window and came face-to-face with the bruin. Landess stepped outside, yelled and fired some warning shots. The bear fled.

Three hours later, the pounding resumed. From his deck, Landess fired one round from his .45 ACP pistol into the bear’s “vitals.” Then he emptied the rest of the magazine into the bear for good measure. It was a young bear, estimated at about five years old, but also 8 feet tall and around 550 pounds.

Sgt. Acton said Landess cooperated by reporting the shooting and bringing the bear’s hide, head and paws to the troopers’ headquarters.

“Apparently, this one had been active in that neighborhood,” Acton said. “Once they become habituated in garbage, they’ll remain in that area.”

Acton, who prefers a 12-gauge shotgun or magnum calibers for bear, said Landess “got lucky” with the 230-grain full-metal jacket bullets in his .45 pistol.

“I had the advantage of a good shot,” Landess concluded. “It’s not a bullet I would recommend to go bear hunting with. However, it did protect me and my family.” 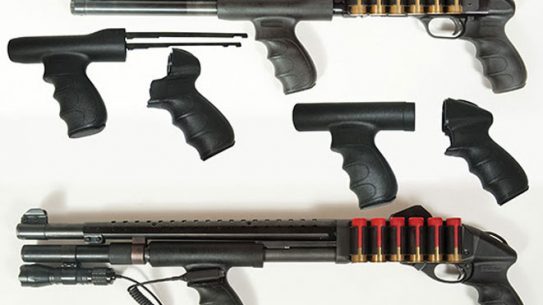 Tacstar Tactical Shotgun Grip Sets are available for the Remington 870 and Mossberg 500/590/600/Maverick.