Based on the Dan Wesson Model 15-2, these all-metal ASG revolvers fire .177-caliber BBs or pellets. The pellet version (rear) also has an exclusive rifled barrel for improved accuracy.

Among the features that have long distinguished BB guns from cartridge-firing revolvers are the fundamentals of how they operate. Modern cartridge guns have swing-out cylinders that chamber from five to eight cartridges, depending upon the model. With air pistols, the cartridge hurdle was cleared by Umarex when the company began offering authentic models like the Smith & Wesson 327 TRR8 and the legendary Colt Python, revolvers with swing-out cylinders and six cartridges that hold a steel BB in the nose of each hollow-point round.

These guns are remarkably precise in appearance, loading (they even use speedloaders) and their double-action/single-action (DA/SA) operation. In essence, they are good enough for firearms training purposes, reloading drills and target acquisition exercises, as the guns have adjustable sights along with the option to add optics. Currently, there are similar revolver versions from Crosman and Swiss Arms, as well as those from Umarex, but what they all lack is a rifled barrel for greater accuracy for shooting the vaunted 10-meter air pistol discipline.

The first to close that gap is Action Sport Games (ASG), a Danish manufacturer with exclusive international licensing to manufacture and market high-end BB and pellet guns based on CZ, Bersa, STI and Steyr Mannlicher semi-autos, as well as Dan Wesson revolvers. It is the latter, Dan Wesson, a brand established in 1968 by Daniel B. Wesson’s great-grandson, which has been used to raise the bar on air pistol revolver design. The Dan Wesson models not only use swing-out cylinders and BB cartridges, but are offered in rifled-barrel versions that fire 4.5mm pellets, putting the Dan Wesson wheelguns into the 10-meter category. 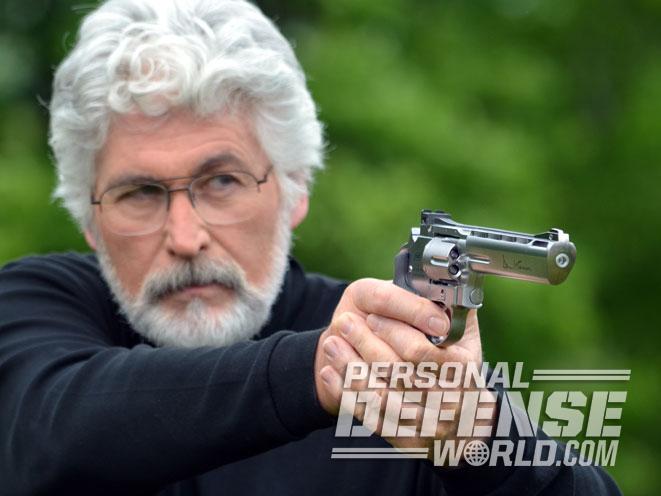 We’re dancing on a technological tightrope here because pellet-firing revolvers are nothing new, and some of the latest such as the Gamo PR-776 use a pre-loaded pellet rotary clip that drops into the cylinder (like a speedloader, only it stays in the cylinder). Umarex has used 10-shot rotary pellet clips in swing-out cylinder revolvers like its 4- and 6-inch-barreled S&W Model 586 and 686 for years, as well as .177-caliber BB models of the Colt Python and the S&W M&P R8 with cylinder-loading, eight-round rotary clips. What ASG has achieved with its exclusive Dan Wesson line is a rifled-barrel pellet gun that loads like a real centerfire revolver with six specially-designed metal cartridges that hold a 4.5mm lead pellet.

There are nine Dan Wesson Signature Series models available as .177-caliber BB guns with 2.5-, 4-, 6- or 8-inch barrels, and three models, with 2.5-, 6- and 8-inch barrels, chambered for 4.5mm pellets. In addition to barrel lengths, there are two standard finishes, black or silver, plus a special-edition, 2.5-inch-barreled model with a gold finish.

The Dan Wesson wheelguns have the inlaid “DW” emblem in the large, finger-grooved grips, with the general design of the gun based on the Dan Wesson Model 15-2 Series. The 6- and 8-inch models also feature a full-length barrel shroud and vent rib. There is only one noteworthy exterior alteration for the air pistols: the traditional Dan Wesson cylinder latch (located in front of the cylinder) is absent and in its place is a frame-mounted, S&W-style thumb latch that also serves as a manual safety.

The Dan Wesson models are all good-looking air guns with a heft and balance (longer-barreled models) that makes them easy to handle and fire accurately. The weight on the 6-inch model is 33 ounces unloaded, which is 5 ounces lighter than the current 6-inch-barreled .357 Magnum Dan Wesson Model 715. The air pistol’s hammer is very wide for easy cocking and single-action (SA) accuracy. The revolver’s double action (DA) runs smoothly and cleanly stages the cylinder as you pull through. Trigger pull in DA averaged 8.5 pounds and 6.25 pounds in SA.

Both test guns (BB and pellet) were the 6-inch-barreled, silver-finished revolvers with the Dan Wesson signature etched in black on the barrel shroud. The grips have a traditional pebble grain finish and break at the frontstrap to allow the main one-piece panel to slide back and expose the CO2 capsule grip channel. The CO2 is easily seated and a hidden turn key moves the capsule up until it is pierced. Then just slide the grip panels back and you’re ready to load.

A six-round speedloader comes with each gun and makes filling the cylinder as fast as a real cartridge revolver. Loading BB cartridges for the Dan Wesson (and the S&W TRR8) is equally fast: You simply place them in the speedloader, pour BBs into a jar lid (or an old pellet tin) and push the cartridges nose down into it. The plastic bullet tips easily find a BB to seat into the opening.

For the 4.5mm pellet gun, however, speed is off the table, and having at least two extra sets of cartridges is a must. Why? Each brass cartridge has a plastic, hollow-point bullet that must be unscrewed, have a pellet inserted and then threaded back onto the bullet case. It is slow, but the return is a level of accuracy from the rifled-barrel pellet gun that BB-firing pistols can rarely match. A box of 25 cartridges cost about $15 from Pyramyd Air.

For the test of the Dan Wesson pellet revolver, I decided to go with a personal favorite, RWS MeisterkugeIn’s higher-grade 4.5mm, 7-grain Professional line. These are match-grade target pellets for competition and training, and they are also excellent for sighting in.

The MeisterkugeIn averaged 412 fps through the traps of a ProChrono chronograph. As for accuracy at 10 meters (11 yards), the Dan Wesson, which was fired off-hand using a Weaver stance and a two-handed hold, produced a best five-round group measuring 1.2 inches. Interestingly, the Umarex S&W 327 TRR8 revolver (see below) with Umarex .177-caliber steel BBs fired from 20 feet produced a nearly matching 1.2-inch group. The best five-shot group with the TRR8, using the Walther MRS red-dot sight, was an impressive 0.875 inches. Both guns were tested firing SA and DA, and the TRR8 actually delivered the best groups when fired in DA.

The Dan Wesson proved more accurate when fired from SA, whereas the trigger on the TRR8 is extremely smooth with an average pull of 6.75 pounds in DA and 5.2 pounds in SA. Overall, both guns were accurate at their respective distances. Not being competition airguns, 1.2-inch groups fired off-hand is more than satisfactory for their retail prices.

A good modern air gun based on a cartridge-firing model generally has the “look” of the original but also all of the usual compromises that separate air guns from cartridge guns. When Umarex began offering all-metal revolvers with six-round cylinders that loaded actual BB cartridges, a new level of authenticity had been achieved.

The S&W 327 TRR8 has the size, the exact weight (35 ounces), the looks and handling of the actual S&W Performance Center TRR8. What it doesn’t have is an eight-shot cylinder, but considering the rest of the gun’s features, two rounds is a small price to pay for what is arguably one of the best-looking tactical BB revolvers in existence.

The Umarex version has a 6-inch barrel compared to the Performance Center .357 Magnum’s 5.5-inch barrel. It also has the same integral under-barrel accessory rail and an added top rail for optics. The DA/SA air pistol also has green fiber-optic front and rear sights. The rear sight is adjustable for windage and elevation. The grip profile and texture are virtually identical to the cartridge model. Press the thumb latch forward and the cylinder swings out for loading. Pull the thumb latch back and it acts as a manual safety.

Everything on the Umarex works smoothly, and it feels like the actual TRR8, making this gun perfect for low-cost training purposes. The Umarex 327 TRR8 retails for $116. Even with the addition of a Walther MRS red-dot sight ($65) and a Walther FLR 650 tactical light and laser ($75) you’ve only spent $265. This is the ultimate tactical revolver in the world of air guns.