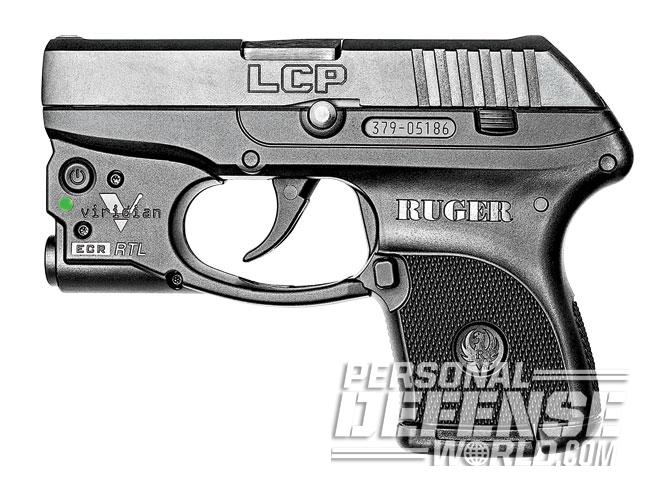 1 of 10
Total EDC Package: Ruger LCP .380 with Viridian’s Green Laser & Light
Take your Ruger LCP .380 to a new level by adding a Viridian Reactor series green laser to the triggerguard. 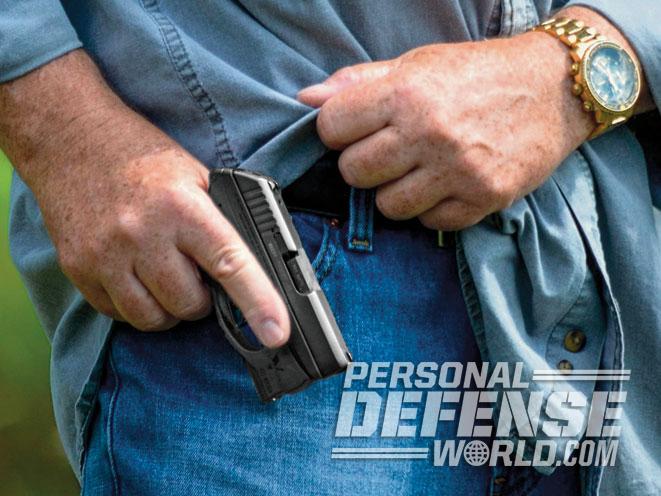 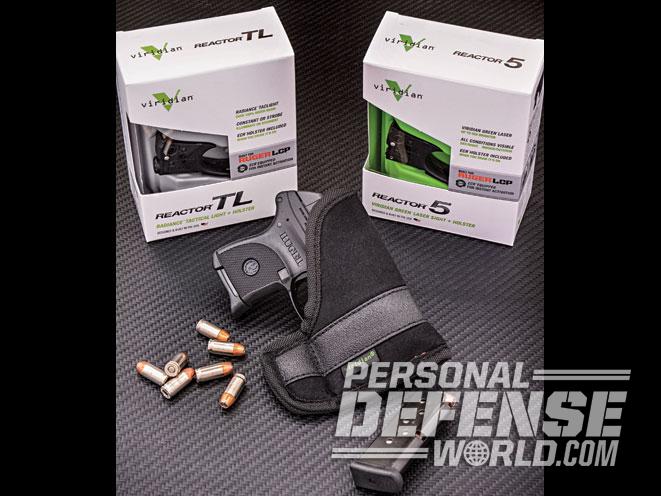 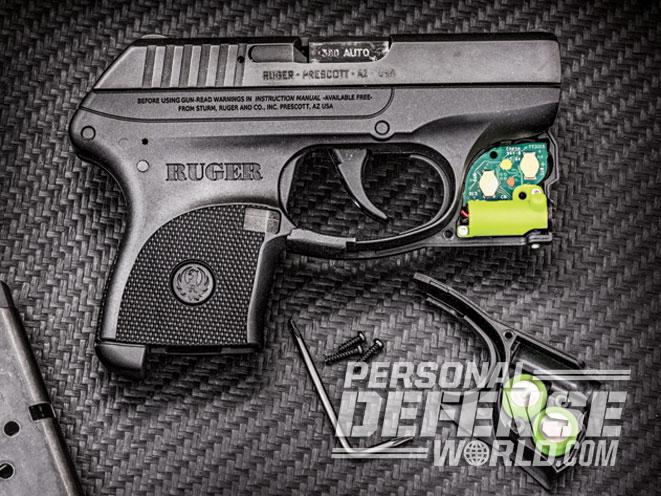 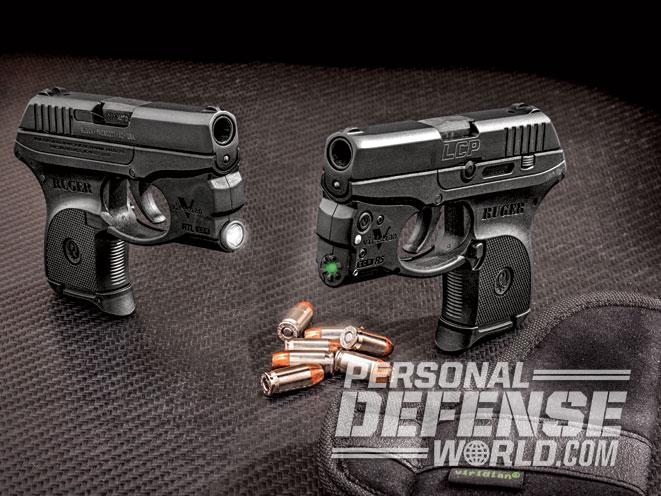 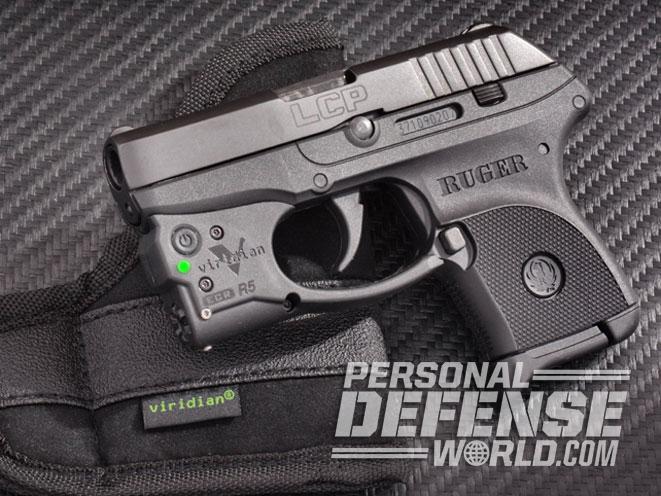 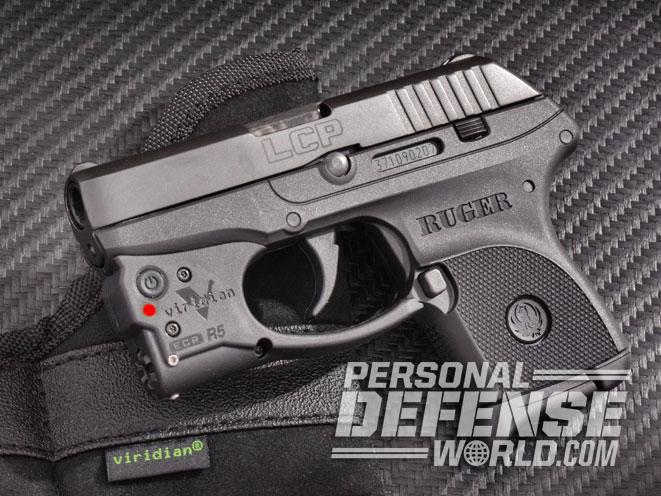 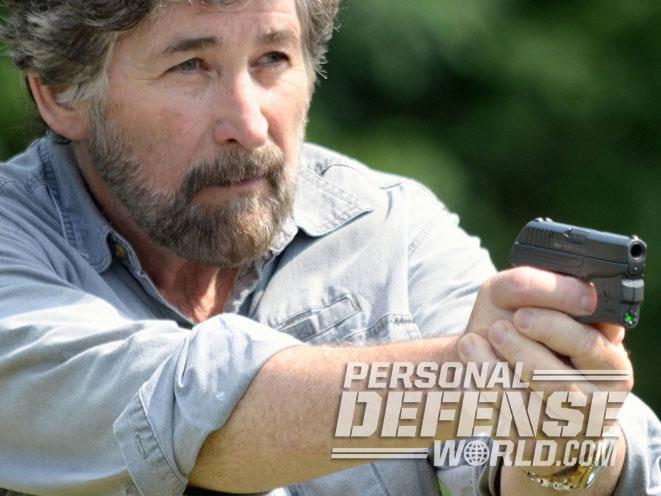 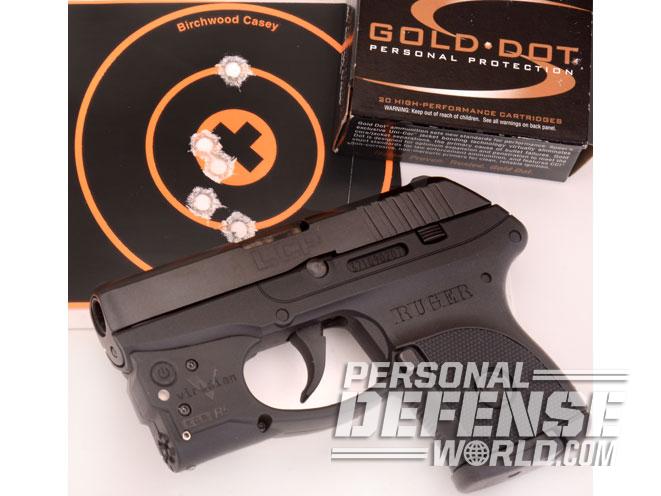 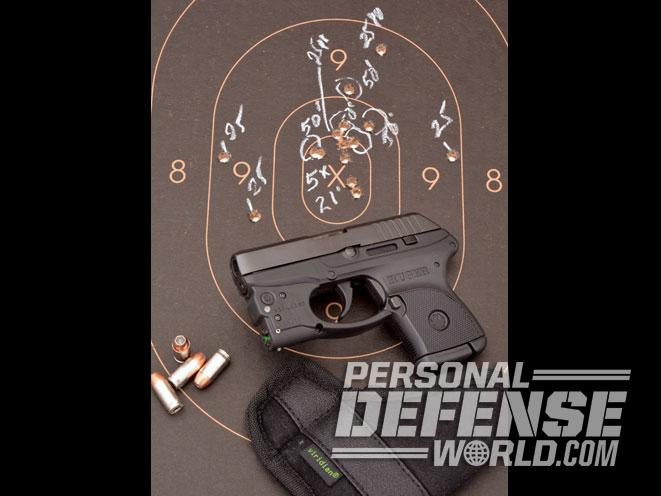 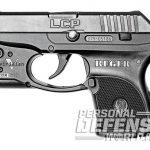 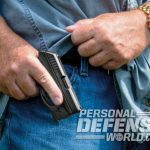 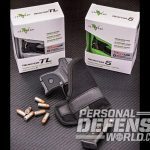 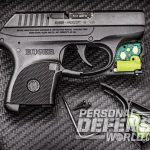 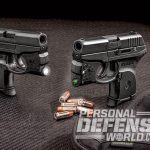 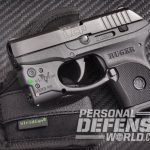 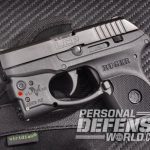 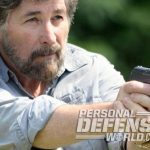 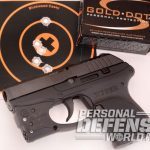 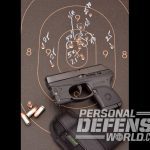 The Ruger LCP has been a standard for concealed-carry use since its introduction back in 2008, when the little double-action-only (DAO) pistol, with its black, glass-filled nylon frame and very “pocketable” 2.75-inch barrel, made the .380 ACP cartridge the most popular self-defense round in America. Since then, the number of subcompact .380 ACPs has been increasing exponentially, but the LCP still remains one of the very best and most affordable pocket pistols in the world.

What made the LCP popular was the simplicity of its design, ease of use and natural balance in the hand, but that came at a cost. With the very low, rounded sights integrated into the flat, blue, alloy steel slide, the LCP lacked any capability for upgrading to white-dot sights, and its small size and construction eliminated the possibility of adding a laser grip. This was finally addressed by Crimson Trace with the Laserguard, and then in 2012 by LaserMax with a similar triggerguard-mounted red laser sighting system, both available today from Ruger as part of an LCP package. Problem solved, with one small exception: A red laser has limited effectiveness in daylight or brightly illuminated rooms. What the LCP needed was a green laser, a virtual impossibility until Viridian took the next step.

The daylight-visible, 532-nanometer Viridian Reactor 5 green laser and 140-lumen Reactor TL tactical light provide the LCP with a compact, triggerguard-mounted accessory suitable for every lighting scenario. The Viridian does not use a pressure pad on the grips or a micro switch on the unit that has to be manually activated. Viridian Reactor Series units come with a Viridian instant-on Enhanced Combat Readiness (ECR) pocket holster that automatically activates the laser or tactical light the moment the gun is drawn. The design is based on the company’s larger laser/tactical lights and TacLoc Laser-Ready Autolocking Holster technology available for compact and full-sized semi-autos, including Springfield’s XD series, S&W’s M&P, the Glock 17, G22, G19 and G23, Sig Sauer P220, P226 and P229 models, among others. However, scaling the ECR technology down to work on a pocket pistol the size of the LCP is a quite a task, especially for a gun that weighs only 9.7 ounces (empty) accessorized with a green laser that adds only 0.78 ounces to the carry weight. A green laser and light that small is a first for the LCP.

The pocket holster that comes with the Viridian has a soft, nylon-lined pouch and exterior with a rubberized band around the middle to keep it secure and upright in the pocket. What’s different about this otherwise very familiar-looking pocket rig is a magnetic pad built into the support band that interacts with an on/off sensor on the Viridian housing, allowing the laser or tactical light to be left on when the gun is holstered. As soon as the LCP seats in the pocket rig, the device automatically turns off and remains at the ready until the gun is drawn. All of it—the gun, laser and holster—can seamlessly disappear in a trouser pocket. There are also several pocket, belt and IWB holsters for the Viridian-equipped LCP available from Galco and DeSantis all using similar instant-on technology.

The advantage of a green laser over a red laser is the effective visual range (EVR), which differs significantly between red and green depending upon lighting conditions. In darkness or subdued light, both red and green laser beams are easy to pick up, but as ambient light increases, red lasers become relatively more difficult to define and their EVR begins to diminish as the distance to the target increases. This does not happen as quickly with a green laser. The easiest explanation is that a green laser beam is brighter and easier to see than a red one, but that’s a half-truth. A green laser is easier to see, but it isn’t actually brighter; our eyes are just more sensitive to the green color spectrum, allowing a green laser to appear up to 50-times brighter than red in daylight or brightly illuminated rooms. The scientific explanation is based on wavelengths and nanometers. A red laser has a longer wavelength averaging 650 nanometers; green lasers are in the 532-nanometer range, the ideal wavelength to maximize visibility day or night. Green is closer to the center of the visible spectrum; at 532 nanometers, a green laser is easier for our eyes to perceive, even though both green and red lasers have the exact same peak power output of 5 milliwatts. In a brightly illuminated room or in daylight, a green laser will paint a target at up to 25 yards or more, which is beyond the theoretical capability of a red laser in daylight (not that the beam isn’t there—we just can’t see it). Thus the choice between red and green is literally all in the eye of the beholder!

A green laser, however, is harder to manufacture than red; it requires more components and more power to operate, and thus creating one small enough to fit under the Ruger LCP triggerguard is a first for Viridian. Two small CR-1/3N 3-volt lithium batteries power the Reactor Series units. The bright green Viridian battery set that comes with the Reactor 5 (there are two extra batteries included, too) is rated for 1 hour of continuous use. The laser has two operating modes that are set by depressing the master on/off switch to either “constant on” or “pulsing.” The pulse setting increases battery life to 2 hours of continuous use. A pulsing laser beam is also easier to pick up under certain lighting conditions.

The Viridian Reactor TL tactical light also has two settings—140 lumens or strobe. As a tactical light, the batteries provide 30 minutes of continuous use, and in strobe mode provide 50 minutes. There is also a battery-level indicator on either Viridian housing that glows green whenever the unit is turned on, off or drawn from the holster. If power levels fall below 20 percent, it will glow red, indicating that batteries should be replaced. And if either the laser or tactical light are inadvertently left on, after five minutes they automatically give a warning blink (pulse) and then shut off to eliminate the possibility of depleting the batteries any further.

To test the Viridian green laser, I shot at high noon to evaluate effective visual range. With a B-27 silhouette target set up at a distance of 7 yards, I made the initial windage and elevation adjustments to the laser to match it up with the open sights on the LCP. Viridian recommends shooting three test shots at this point to see if the point of impact is the same. It only took six shots to get the laser zeroed in at 7 yards. From there, I began shooting at distances from 7 yards out to 25 yards with Speer Gold Dot 90-grain hollow-point (HP) rounds. The best five-round group, fired using a two-handed hold, measured 1.5 inches, all within the X ring of a cardboard B-27 silhouette target. Stepping back to 15 yards, five rounds connected at 1.88 inches, hitting in the X, 10 and 9 rings. In full daylight at 25 yards, the distance to the target is a push for the LCP’s 2.75-inch barrel. Nevertheless, I was able to pick up the Viridian green laser at this range and carefully squeeze off the first shot, which hit the target at the top edge of the X ring. The next four shots were not as good, all hitting in the 9 ring at different positions for an overall spread of 5.5 inches. Still, at 25 yards, firing off-hand with an LCP and placing five out of five in the center body mass is nothing to be ashamed of. I have never done that with the gun’s open sights.

A Ruger LCP has been riding in my front pocket for more than five years and it truly becomes second nature to carry this gun concealed every day. Equipped with a Viridian green laser and the Viridian pocket holster, the LCP becomes an even more capable defensive sidearm. For close-quarter use, the green laser makes this a very accurate and easy to target semi-auto, no matter what the lighting conditions, from zero dark thirty to high noon. 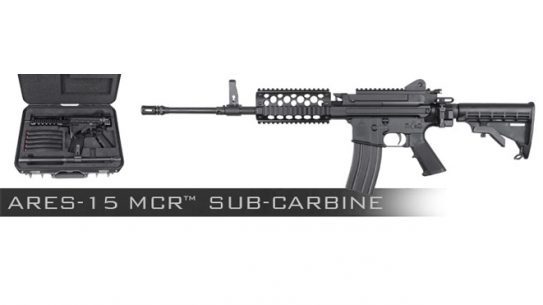 ARES' MCR Sub-Carbine is a 5.56 NATO caliber weapon with gas piston operation, a...