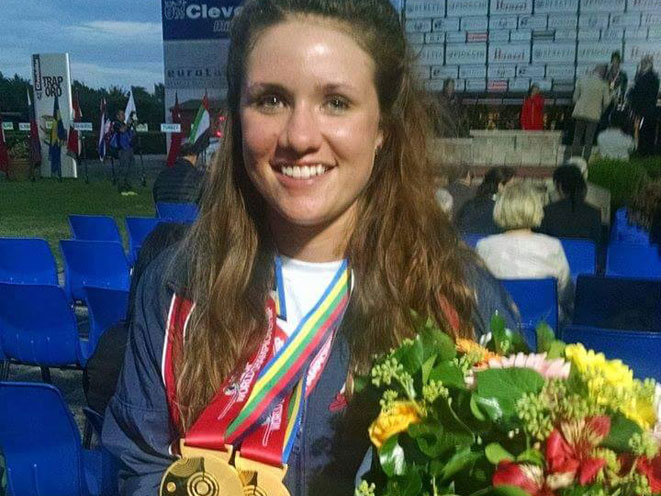 Women’s Skeet athletes from the U.S. will be bringing back a lot of hardware from the International Shooting Sport Federation (ISSF) Shotgun World Championship as Morgan Craft (pictured) and Caitlin Connor went gold/silver respectively in the Open division and Sydney Carson and Dania Vizzi took silver/bronze in the Junior division today in Lonato, Italy.

The competition in the Open division couldn’t have been more intense as the gold-medal match turned into an American faceoff for not only for a gold medal, but also a nomination to the 2016 Olympic Team via the USA Shooting points system.

Craft (Muncy Valley, Pennsylvania) and Connor (Winnfield, Louisiana) fought their way to the gold-medal match through a three-way shootoff with eventual bronze medalist Ning Wei of China. Once in the gold-medal match, Craft and Connor were tied right up until the second-to-last pair of targets. On the final pair, Connor missed both targets, leaving the door open for Craft who would hit both to take the gold medal, 15 – 13. The win also secured Craft the nomination to the Team for the 2016 Olympic Games in Rio de Janeiro, Brazil.

“Eight years ago I never thought I would be at this spot,” Craft said. “This is what I worked for, what I believed I can do for the last couple of years. I’m exactly where I want to be now – I just achieved my lifetime goal…I love Caitlin and I’m so happy that we got gold and silver, I couldn’t be happier to share the podium with my teammate.”

Craft, Connor and Rhode also claimed the team gold medal when they equaled the world record of 215 targets.

Connor, along with Kim Rhode (El Monte, California) who finished in 16th place, as well as other Olympic Team hopefuls, will compete for the second Women’s Skeet team nomination in the two-part Olympic Trials process which begins in October at the Fall Selection Match in Tucson, Arizona. For more information about the Olympic Team nomination process and point system for USA Shooting athletes, please click here.

The drama continued into the Junior Women’s Skeet Final as all three U. S. athletes – Sydney Carson, Dania Vizzi and Katharina Jacob – had qualified to move on.

In the Semifinal, Jacob (Rochester, Michigan) faltered early and would only hit 9/16 targets to finish in sixth place. 2014 Junior World Champion Vizzi (Odessa, Florida) advanced to the bronze-medal match with 11 targets and Carson (North Liberty, Indiana) would advance to the gold-medal match with 15 targets.

In the bronze-medal match, Vizzi would only drop two targets to comfortably take the win 14-9 over Francesca Del Prete of Italy. In the gold-medal match, it looked as if Carson would be out early as she dropped five targets in her first eight. Carson, however, ran for a perfect eight hits in her final four pairs to tie Yufei Che of China at 11 targets apiece. Che and Carson moved on to a shootoff to determine the gold and silver medals where Che would win four targets to Carson’s three and win the gold medal.

“Couldn’t have asked for a better trip here in Italy,” Carson (@SydCarsonUSA) tweeted, following her match. “Thank you to everyone who was supporting me the whole time!”

RELATED STORY: 12 Divisions of Action-Shooting Sports with the IDPA, USPSA

“I’m extremely proud of Sydney for the composure she was able to display in Italy,” said Chad Whittenburg, USA Shooting Development Coach and Carson’s coach at Martin Methodist College (where Carson is a freshman). “Leaving home for college is one of the toughest things a young athlete can do, especially during a peak performance time. She did so with resilience and a strong mental stamina! We are proud of her and the team for sure!”

Carson, Vizzi and Jacob also won a team gold medal with a combined 206 targets, which set a Junior world record for Women’s Skeet.

For the complete schedule and results from the Shotgun World Championship, please click here: http://www.issf-sports.org/competitions/venue/schedule.ashx?cshipid=1700. 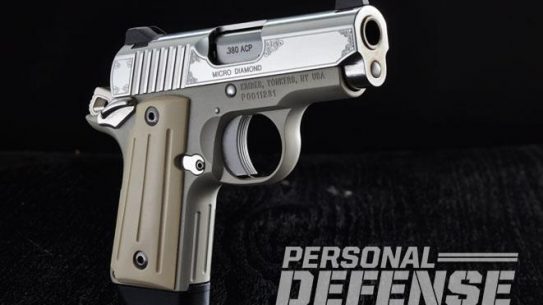