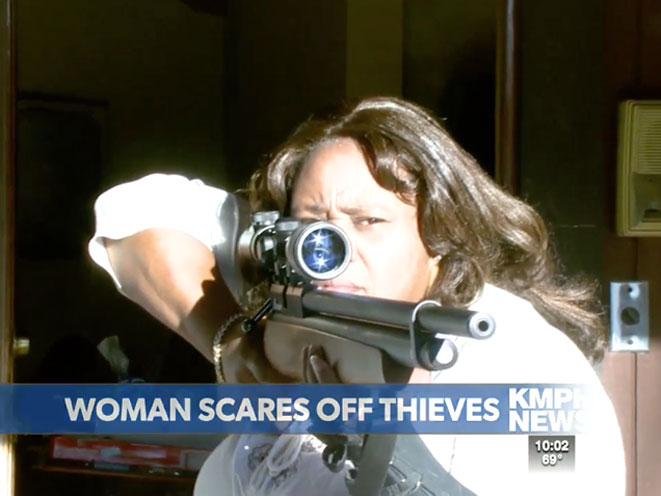 Two robbers in Clovis, California proved no match for a female homeowner armed with a rifle.

As WFSB reports, Marilyn Williams was in her bed at around 8:30 a.m. last Wednesday when she heard a strange commotion outside. She went to the window to investigate, and saw a person wearing a black hoodie and bandana in her yard.

Williams then ran to her closet and grabbed her rifle, which, as Bearing Arms points out, is actually an air rifle. She went to her door, pointed her rifle at the suspects outside, and yelled at them to get out of her yard. Both men fled.

“The first guy that I saw, he had jumped over the fence. The other person had taken off towards Alluvial,” Williams told WFSB.

Police believe the two suspects had just robbed another elderly couple and were in the process of escaping the scene when they were spotted by Williams.

According to WFSB, Williams earned a sharpshooter medal in her high school’s ROTC program. She says she had the suspects in her riflescope but decided not to pull the trigger.

As they fled Williams’ yard, the robbers dropped a pillow case which contained a gun, a mask and hoodie, and jewelry from the home they had just targeted.

Police are still looking for the two suspects. 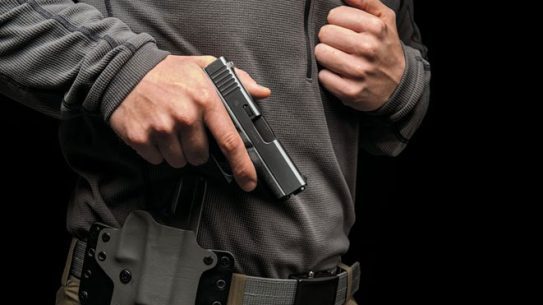 An employee at a bar in East Baltimore shot a man who was robbing...