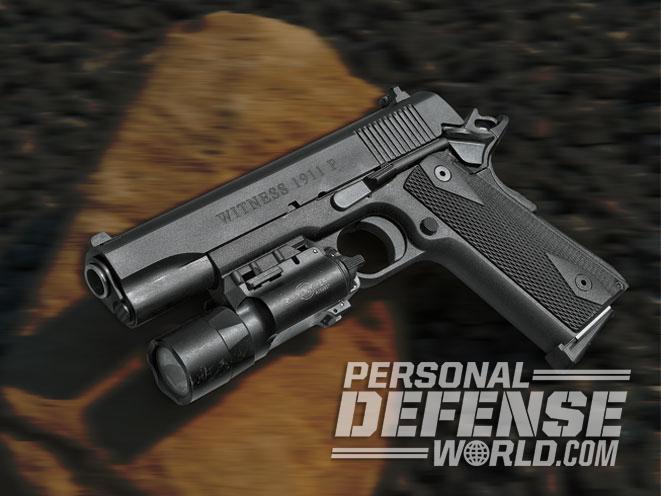 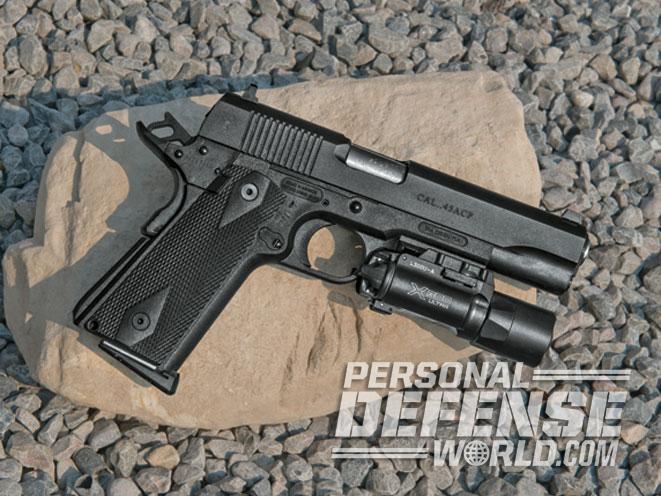 2 of 10
EAA Witness 1911 Polymer
A rail is molded into the 1911’s polymer frame for accessories such as lasers and lights, like this SureFire X300 Ultra. 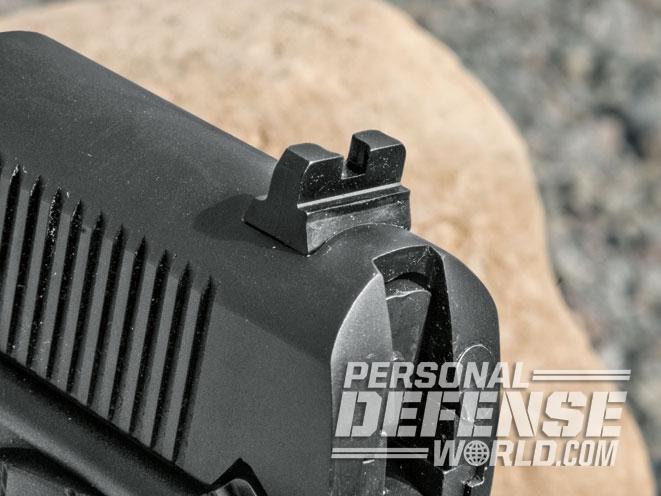 3 of 10
EAA Witness 1911 Polymer
The rear sight offers a ledge for emergency reloads. 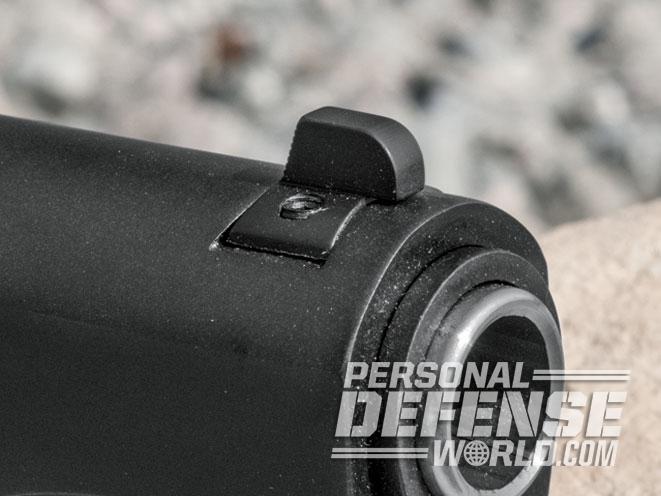 4 of 10
EAA Witness 1911 Polymer
The front sight can be adjusted or replaced as necessary. 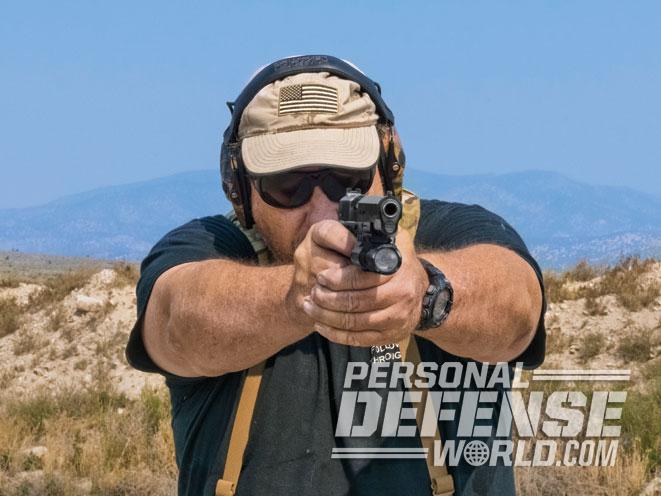 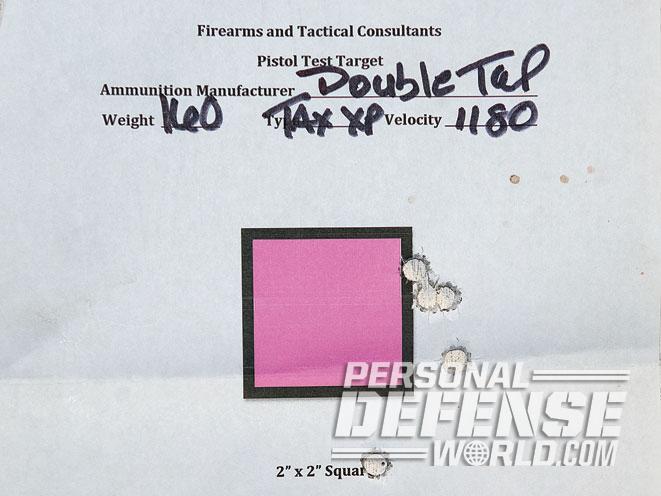 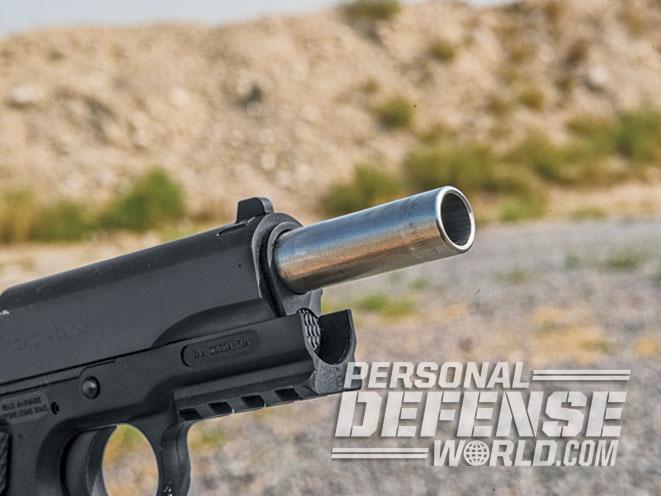 7 of 10
EAA Witness 1911 Polymer
The 5-inch barrel is held in place with a standard bushing. 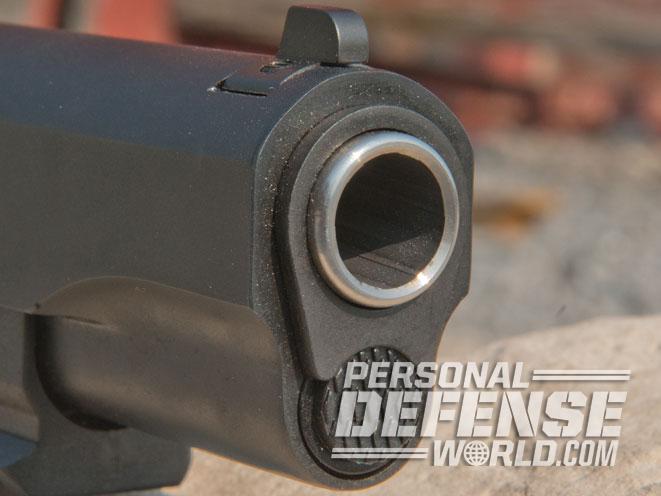 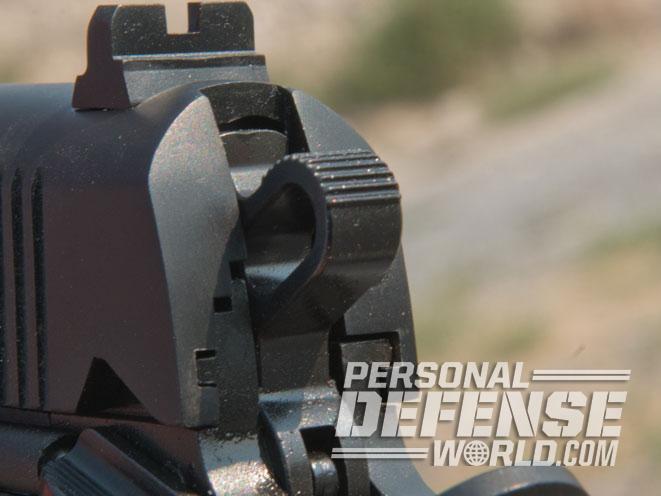 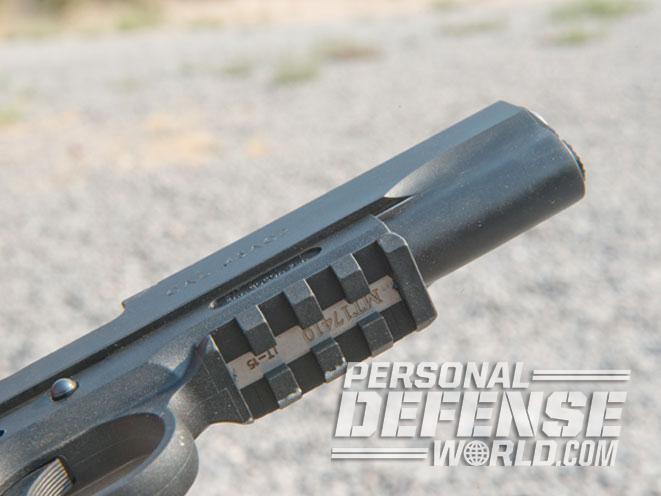 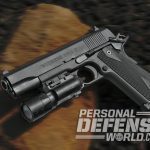 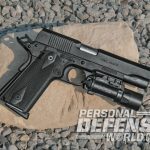 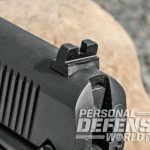 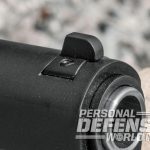 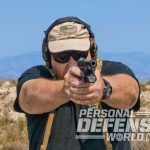 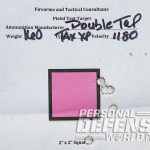 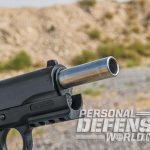 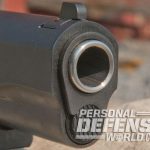 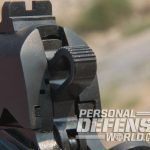 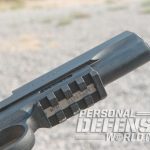 Polymer frames have worked their way into virtually every aspect of handgun manufacture, including revolvers. Polymer-based handguns remain the first choice among most police agencies and concealed carriers, with even the military looking in that direction as well. Even the venerable 1911 has seen double-stacked, polymer-framed designs for years.

Until now the only thing missing was a single-stack, polymer 1911 in .45 ACP. There was no reason in particular it wouldn’t work, at least none that could be proven. Many polymer-framed handguns use steel inserts these days to deal with slide-to-frame fit, and the durability of polymer has never really proven to be problematic. The only real issue would seem to be the feed ramp, and that can be dealt with by using fully ramped barrels or even steel frames being inserted into polymer. It was just a matter of time before this idea became a reality, and now European American Armory (EAA) has unveiled its Witness 1911 Polymer.

The Witness uses a steel frame with polymer molded around it to complete the remainder of the frame. There is no metal-to-polymer contact outside of the checkered, steel magazine release. The slide contains standard 1911 parts, too, including a standard guide rod and spring. The barrel bushing is steel and the return spring plug is plastic. Steel is used for the grip safety, the thumb safety, the slide release, the trigger and the plunger tube. The trigger’s internals and pins are Series 70 and all metal with a mid-reach, solid trigger shoe. The pistol’s hammer is a “long hole” or skeletonized design. Polymer was used on the slightly rounded mainspring housing, and the grip safety is a full beavertail with an extended pad. There is no beveling on the mag well and the frontstrap is neither stippled nor checkered. The trigger housing is round and smooth. The molded grip includes a front rail typical of similar 1911 designs to accommodate lights and other accessories.

A steel slide houses a standard, ramped .45 ACP barrel that is marked “CAL 45 ACP;” no match chamber is indicated. Cocking serrations are at the rear only. The Witness’ front and rear sights are dovetailed, black and drift adjustable. The front sight is kept in place by a set screw. The rear sight is a standard design, not your typical low-profile sight for concealed carry. The pistol’s grips are black, checkered and polymer. EAA ships the Witness 1911 pistol with one eight-round magazine in a small hard case.

The Witness Polymer’s weight is listed at 32 ounces, which is about 8 ounces lighter than most full-sized 1911 pistols and similar to some alloy-framed full-sized models. The finish on the pistol’s frame was smooth with no sharp edges or molding marks. The mainspring housing has a slight hump at the bottom—it’s not flat, but it’s not rounded either. When holding and pointing the gun, it feels like a flat-housing-equipped pistol.

The thumb safety was properly tensioned, delivering a solid “click” commensurate with most base-model 1911s. Similarly, the grip safety’s tension was correct, and it bounced back nicely and functioned perfectly throughout testing. Serrations on the trigger provide a sure feel with a medium reach. The trigger’s take-up was quite smooth and its break was crisp at about 5.25 pounds with no noticeable overtravel. The trigger engaged the sear properly, with a clear and repeatable reset every time.

Pre-break-in slide-to-frame fit was a bit rough to cycle with very little play or side-to-side movement. Again, that’s about what you expect from a base-model 1911; some time on the range will smooth it out. Both my Streamlight and SureFire lights fit the rail tightly, and the DG-18 switch on the X300 lined up properly. It fit in all of my holsters designed to accommodate either a weapon-mounted light or a light rail.

During testing, all magazines dropped free during dry fire, although the release is a bit “sticky.” Range time or just a bit of fitting would cure that. Everything in the pistol is standard 1911, meaning upgrading it with any aftermarket parts should be as simple as it gets.

In field-stripping the Witness Polymer 1911 prior to shooting, I found it disassembled like any 1911. No wrench was needed for the barrel bushing, the slide stop pushed out properly (by hand) and the rest was pure 1911. While the plastic recoil spring plug worked fine, it would be my only must-replace part from the get go. Lightly oiled, it was put back together and the fun began.

To test “out of the box” reliability with hollow points, three magazines were filled with different self-defense loads. Each magazine was fired half slow, half rapid fire. Throughout this, there was not a single malfunction or failure to go into battery. Having had a custom 1911 or two fail this test, I found it very promising. I then broke in the Witness with a few hundred rounds of DoubleTap’s new Target line. Loaded with 230-grain FMJ to match specifications, the pistol cycled without issue. Another couple hundred rounds of Federal American Eagle 230-grain FMJ worked out any burrs or other issues.

Further testing with self-defense ammunition yielded similar results. Reliability overall was excellent, which is what you expect from a basic 1911 pistol no matter its construction.

The Witness Polymer 1911’s accuracy was also pretty solid. Without a match chamber, tiny little groups were not expected, but my best group using the DoubleTap 160-Grain +P ammunition measured 2.5 inches. The gun was pretty consistent across the board with everything patterning right at 2.5 to 3 inches. Moving to more practical distances, it performed quite well. From off-hand at 10 yards, it was possible to consistently get fist-sized groups even on the move. A concerted aiming effort at 7 yards produced tightly stacked groups with absolutely no flyers present.

Recoil was very similar to lightweight, alloy-framed 1911 pistols I’ve tested. In my experience, the lighter +P loads are often the most comfortable in these guns, and this pistol was no exception. Both DoubleTap’s 160 grain and Black Hills’ 185-grain TAC-XP +P loads were very comfortable and controllable. A steady diet of the Winchester 230-grain loads was a bit stout. All were controllable, however, given a solid shooting grip. Loaded with a bunch of my .45 ACP reloads from my ISPC days, the EAA Witness Polymer 1911 was quite a pleasure to shoot at the range. Loaded at just over “major,” the 200-grain bullets make it a ton of fun to shoot and suitable for action pistol matches.

Most of the testing was completed with the SureFire X300 light attached. Polymer-framed pistols often suffer failures when lights are attached, especially if their magazine springs are weak. There were no such issues with the Witness 1911, however, as it worked just fine throughout the evaluation.

I used several magazines throughout testing, including the single factory magazine provided. The alternates included Wilson Combat’s 47D, McCormick’s eight-round Power Mag with 10-8 Performance basepads in addition to 10-round Power Mags. They all worked, although my favorites are the Wilson 47D or the gun’s factory mag and then the Power Mags. They all locked the slide open and returned to battery using the “slingshot” method or simply by pressing the slide release.

Alloy-framed 1911 pistols have always enjoyed a bit of controversy, as many still see them as carry pistols you don’t shoot much. Having put well over 10,000 rounds through a few alloy-framed 1911s with no issues, that’s an opinion that has just not been supported out in the real world for years. Metals are now stronger, machining is better and tolerances are tighter. The same has held true for polymer.

Recalling all the naysayers of old who claimed “plastic pistols won’t last,” time and real testing has proven that idea to be nonsense. Polymer-framed pistols cost less to manufacture and can offer significant weight savings. Improvements in melding polymer frames and inner steel structures has changed the game considerably, and the Witness Polymer 1911 would appear to be a good example. This gun’s function was as good as any basic 1911 pistol I’ve tested, especially those retailing for around $600. It provides yet another solid choice in a quickly expanding entry-level 1911 market. If this test is any indication, the gun’s future surely looks promising.