Just the name of Desert Eagle immediately brings up images of one of the most famous movie guns in recent history. Any time a director needed to make a big impression it was with one of these huge, gas-operated, rotating-bolt pistols that handle everything from the .357 Magnum to .50 AE cartridges. While the Baby Desert Eagle is an altogether different animal, it too seeks to make a big impression with shooters, albeit in a much smaller package.

The original Desert Eagle was developed by Magnum Research Inc. and manufactured in Israel by Israel Weapon Industries. They proved to be capable and popular. The latest version of this rugged and reliable pistol is the new Baby Desert Eagle III.

The new Baby Desert Eagle is available in several variants, but the one that may appeal to most who carry concealed is the semi-compact model. The Baby Desert Eagle III is based on the much-copied, tried and tested CZ 75 design, which places the slide rails inside the frame. Many considered the CZ 75 at the time of its introduction to be the greatest double-column-magazine 9mm pistol in the world. With the slide riding inside the frame, there is a very tight fit between the two, which contributes to its impressive accuracy. 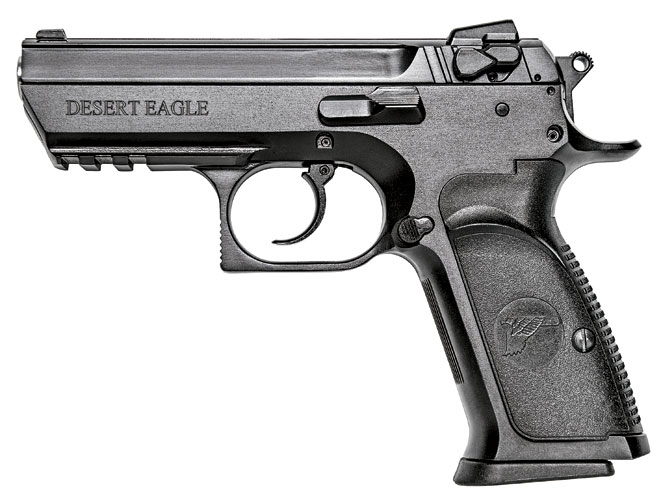 This is a traditional double-action/single-action (DA/SA), short-recoil-operated, semi-auto pistol that offers superior reliability and an easy second-strike capability. The 3.85-inch barrel on the semi-compact version features match-grade precision rifling for improved accuracy. The key difference between the full-sized model and the semi-compact is the shorter length of the barrel and slide.

The grip remains the same, which allows for all Baby Desert Eagle III magazines of the same caliber to be fully interchangeable across the entire line. Capacity in 9mm is an appealing 16 rounds, while in .40 S&W it is 13 rounds and in .45 ACP (steel version only) it is 10 rounds.

The high-quality carbon-steel slide has been trimmed down on the sides to give the pistol the more angular look of the original Desert Eagle. This also has the added benefit of reducing the pistol’s weight and creating a thinner profile. The effect is significantly more pronounced on the polymer-framed version, which has itself been given a matching angular design. From the front, the look is almost triangular.

The slide also features a matte black oxide finish, Novak-style three-dot sights and an ambidextrous decocker/safety lever with a teardrop shape for ease of use. This allows the operator to safely lower the Commander-style hammer from the single-action to the double-action position while also engaging the hammer-block safety mechanism. The pistol also features an internal firing pin safety mechanism. The trigger itself has also been redesigned for a smoother and more comfortable pull, which has been set at 12 pounds for double action and a crisp 4 pounds in single action.

The polymer-framed Baby Desert Eagle III is almost 10 ounces lighter than its steel-framed counterpart, something to be appreciated during concealed carry. The polymer-framed pistol features ergonomic, grooved finger grips for an improved hold even in inclement conditions and a high beavertail to avoid “hammer bite.” The grip frame has been slimmed down for a narrower profile that makes the pistol easier to conceal and easier to use by those with smaller hands.

At the front of the frame there is a length of Picatinny rail at the dust cover for conveniently and easily mounting accessories such as tactical lights or lasers. The enlarged triggerguard has also been squared off at the front and features forward checkering. The slide stop/slide release is well placed, large and easy to use, and the magazine release is reversible for right- or left-handed operators. 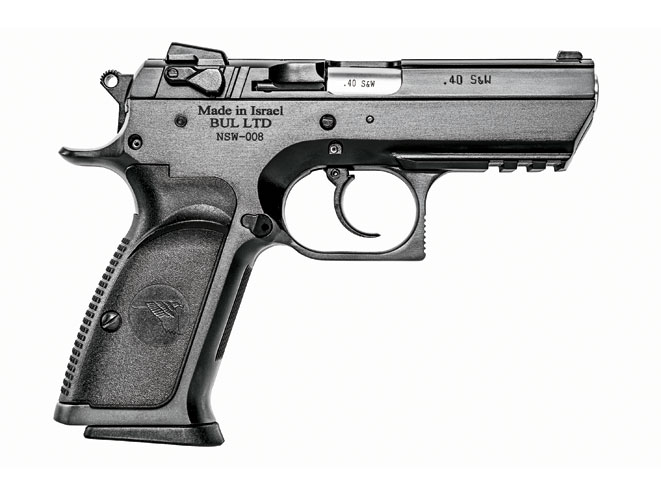 All Baby Desert Eagle III pistols ship with two steel magazines, and the pistol itself is available in several variants. The steel-framed pistols are the only ones currently being offered in .45 ACP. The steel-framed pistols do weigh considerably more but have a thinner profile overall. They also have a lower overall height than the polymer variants. Essentially, the thinnest and most compact Baby Desert Eagle III is the steel-framed semi-compact model, but it does weigh almost 10 ounces more than the polymer-framed version.

The full-sized pistols have longer barrels and overall lengths measuring 4.43 inches and 8.375 inches, respectively. This does provide a longer sight radius with improved potential for accuracy as well as higher velocities for fired bullets. The semi-compact versions have 3.85-inch barrels and 7.825-inch overall lengths. The weight difference between the full-sized steel model and the semi-compact polymer-framed version are not insignificant, weighing 37.9 ounces and 26.3 ounces respectively.