The Ruger LCP Custom is instantly recognizable by its bright red trigger, polished blued slide and new sights. All three features greatly improve the .380 ACP semi-auto for a mere $30 more than the standard LCP.

There’s a new LCP in town and it is unmistakable for several reasons, most notably for a distinctive, skeletonized, red aluminum trigger. Of course, anodized aluminum triggers are nothing new, they’re available as a custom addition for a vast number of handguns, but this one comes direct from the factory. The idea behind the new trigger is more than appearances; it is designed to reduce “felt” trigger pull by changing the trigger finger interface so that you have more leverage.

This also reduces the bite during recoil from the pointy recurve at the bottom of the standard trigger. In general, the trigger feels lighter, stacking becomes less evident and reset is quicker, although the trigger pull remains the same.

Other significant features of the LCP Custom are the polished blued slide and its new sights. Up front is a tall blade with a photoluminescent center dot; in back is a tall, square-notched, dovetailed sight that centers the front dot in an instant. The LCP Custom also uses a new, more durable stainless steel guide rod. Everything else that is good about the original LCP remains, making the Custom version a significant factory upgrade.

With its lightweight polymer frame, aluminum subframe, through-hardened steel slide and blued steel barrel, the LCP Custom remains ideal for unobtrusive carry in a trouser pocket while providing a standard 6+1 capacity. Over the years since the little double-action-only (DAO) pistol, with its glass-filled-nylon frame, very pocket-friendly 2.75-inch barrel and 0.8-inch width, was introduced, the .380 ACP cartridge has become the most popular self-defense round in America and the LCP one of the true success stories in contemporary small-caliber self-defense firearms.

While the LCP was not the first pocket-sized, polymer-framed .380, the Ruger name attached to the LCP set the industry on fire in 2008 and sent the company into overtime to meet demand. But moreover, the LCP’s popularity led to a proliferation of new .380 pocket pistols and to ammunition makers producing better, higher-velocity .380 ACP rounds. 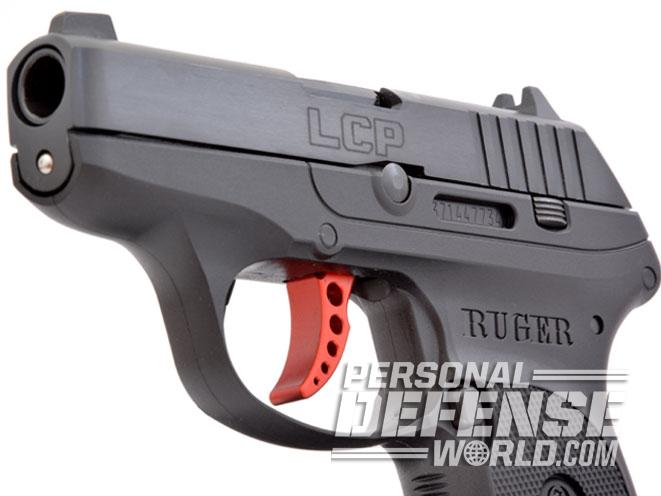 In terms of familiarization, the LCP is a hammer-fired, locked-breech, recoil-operated semi-auto with an internal hammer. The hammer can be clearly seen through a cutout in the back of the slide when the action has been cycled. If it hasn’t, there is nothing showing at the back of the slide, making for one very quick check of the gun’s condition. In addition, the trigger, though remaining in its forward position, has zero resistance if the slide has not been cycled. Finally, there is a loaded-chamber viewport at the breech.

While it is unusual for a pistol as small as the LCP to use a locked-breech design, as opposed to the blowback operation common with many .380s, Ruger opted for the sturdier build generally used for larger-caliber semi-autos.

The simplicity of the LCP design is ideal for a personal defense handgun. First, there are no manual safeties to remember, and the DAO trigger has a short 0.5-inch length of travel countered by a solid 6.5-pound average trigger pull. Another plus is that the LCP does not use a magazine disconnect, so it will fire a chambered round if the magazine is removed or if one gets caught up in the middle of a tactical reload.

One of the issues with pocket pistols, including the LCP, is capacity. Six-round magazines are the norm, but there are some interesting alternatives, especially for the LCP. There are two ways to push capacity from 6+1 to 10+1 or even 15+1. Both magazines are designed and manufactured by ProMag. That company’s 10-round, blued steel magazine is ideal for a reload (but not that good for pocket carry, as the magazine adds 2.43 inches to the grip frame including the finger rest extension).

Constructed from heat-treated, blued steel, with a follower, a lock plate and baseplate molded from a proprietary Zytel-based polymer, this gives you 10 rounds on the reload rather than six, and the ProMag is still small enough to comfortably carry in a pocket. Retail price is just $28. As an even higher-capacity option, the same style of magazine is available for 15 rounds and priced at $31. If an LCP is your basic personal carry gun, an extra increased-capacity magazine for the reload is a good move.

To test the latest LCP I selected two Sig Sauer loads, Elite Performance V-Crown 90-grain JHP and Elite Performance 100-grain FMJ, along with Federal Premium’s 99-grain HST JHP. The LCP Custom shot just above point of aim with its new sights, making this gun significantly faster to get on target. The heavy trigger keeps your grip firm, and the recoil with all three loads was fairly snappy, which isn’t unexpected with a 9.75-ounce handgun.

All three brands of ammo clocked in well over 800 fps from the short, 2.75-inch barrel, with Federal Premium’s new HST clearing the traps at an average of 886 fps, Sig Sauer JHP just a hair behind at 882 fps and the Sig Elite Performance FMJ traveling at an average of 825 fps. Shooting from a distance of 7 yards, the tightest five-round group was shot with Sig Sauer JHP at 1.375 inches. Sig’s FMJ load distributed five rounds at 1.92 inches, while Federal HST landed five at 2 inches with a pair overlapping and its best three grouping into 0.687 inches. 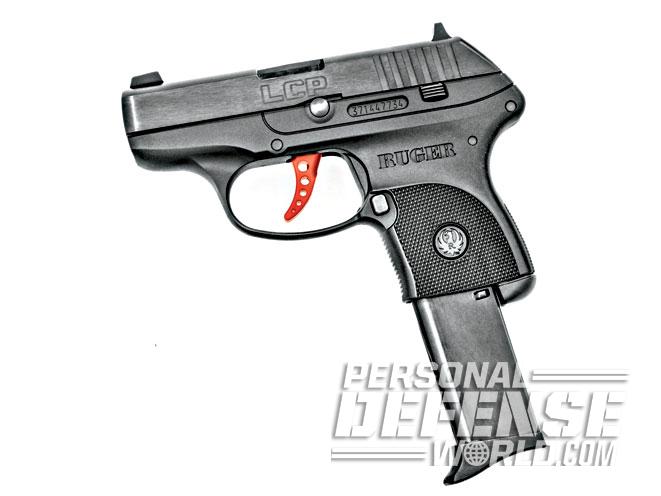 The LCP needs no further praise than it has received over the last seven years; the sales speak for themselves. The new LCP Custom model ups the ante with features that have only been available from custom tuners. With the new polished steel slide, stainless steel guide rod, skeletonized aluminum alloy trigger and photoluminescent sights, the LCP Custom offers a significant number of upgrades for only $30 more than the standard model! The LCP remains one of the best options today for a concealed-carry semi-auto, and with its new custom enhancements and $419 price tag, this gun has never been better.