by Doug Larson
in Guns, Handguns
0

Remington’s RM380 is built to appeal to the growing demand for small, easily carried pocket pistols chambered in .380 ACP.

The release of the RM380 marks Remington’s recent entry into the .380 pocket pistol market. The new subcompact is a double-action-only (DAO), semi-automatic handgun with a locked breech. The company touts the fact that the pistol has a 2.9-inch barrel that it claims is the longest barrel in its class. Longer barrel length should result in higher muzzle velocities and more energy on target. Because of the gun’s diminutive 5.27-inch length and 3.86-inch height, it can definitely be placed into the class of pocket guns.

The RM380 is designed to offer a good amount of power and performance in a very small package. Bucking the current trend toward employing polymer frames in small pocket pistols, the light and handy RM380 instead employs aluminum alloy in in its construction. Whatever your feelings are regarding alloy versus polymer, the result is a sturdy little pistol that should be able to dish out a good amount of rounds with no discernible wear. 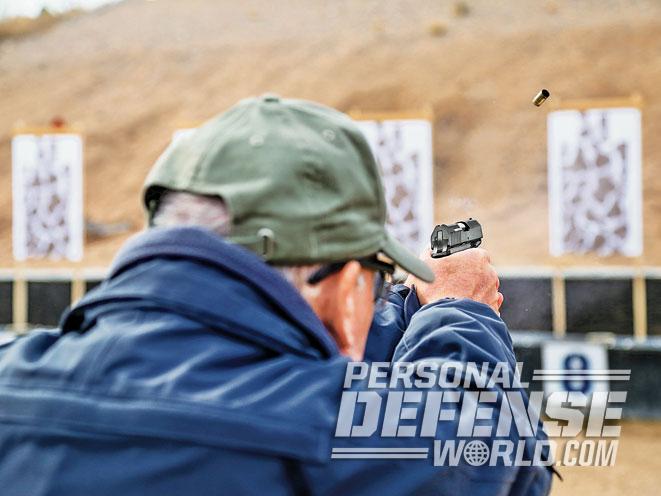 During my testing of the RM380 at a recent writer’s event, I experienced no malfunctions in running 100 rounds of Remington ball ammunition through the particular preproduction gun I tested. Since these were preproduction samples and the engineers were making modifications before releasing the design for production, an accurate generalization about reliability is not possible. Besides, 100 or even 500 rounds through 10 or so guns is not enough to create a statistically significant sample. We must wait for production guns before any judgments can be made.

For those readers who might be saying that this gun looks suspiciously like the Rohrbaugh R380, you are really paying attention. Recently, Remington purchased Rohrbaugh and with it came the R380 design. A major change from the Rohrbaugh design, however, is the switch from a European-style heel magazine release to the American-style button release that is located just behind the trigger and a little above the junction of the triggerguard and frontstrap. And while the Rohrbaugh R380 was a fairly expensive gun, the RM380’s retail price is $417, which puts it in the price range of the major .380 ACP pocket pistol competitors. 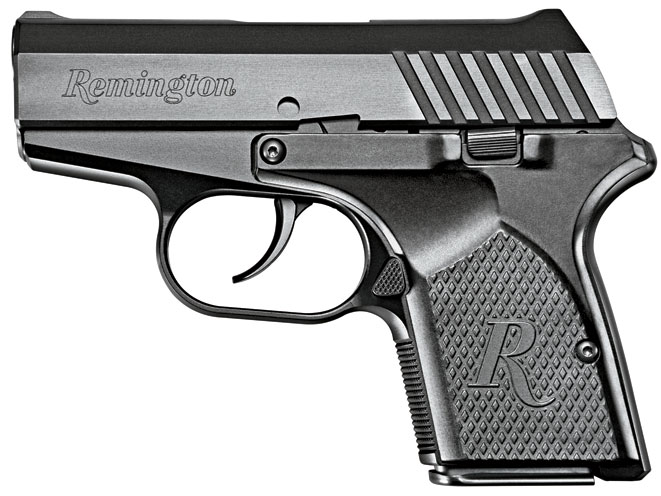 The RM380’s 2.9-inch barrel is made of 410 stainless steel and features a 1-in-16-inch twist rate. Atop the slide—this gun does not sport the tired, blocky and hard-to-conceal square edges of most modern pistols—Remington put a fixed blade front sight and a fixed notch rear sight, which is not an unusual sight configuration for a gun of this type.

The frame is manufactured from 7075 aluminum and has a black anodized finish to match the black finish of the steel slide. Remington has installed dual recoil springs that ride on a steel guide rod, and there are seven diagonal serrations at the rear of the slide that provide a slip-resistant gripping surface for manually cycling the action. Racking the slide on my test gun was not difficult. 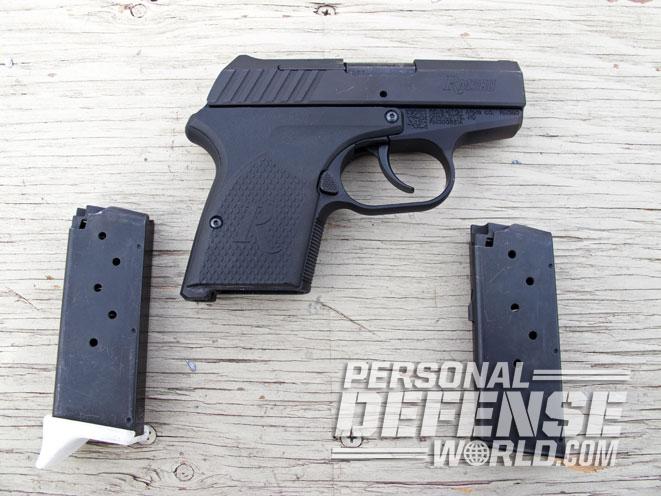 This is a hammer-fired gun, not a striker-fired gun. The hammer has no spur to get caught in clothing or a purse on the draw. Remington indicated that the gun will be supplied with two six-round, steel magazines with witness holes—one with a flat floorplate and the other with an extended base to provide a bit more gripping surface. The gun has a short grip, so the extended floorplate should be helpful for many shooters. Additionally, to help get a better grip, the frontstrap is checkered and the triggerguard is undercut a bit to allow for a grasp that is closer to the bore axis.

Unlike most new pocket pistol models, the RM380 has removable, black polymer grip panels that are checkered for a better grip and secured by screws. Time will tell, but it is possible that aftermarket grips will eventually become available for the gun as well. 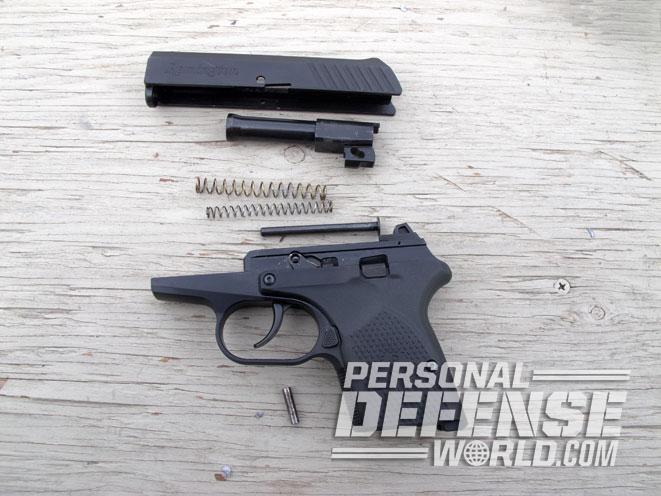 Besides the checkered, delta-shaped magazine release, which, when activated, allowed magazines to fall freely, the only other controls are the trigger and slide catch. The slide catch is a low-profile design that is surrounded by a tapered ridge to help prevent accidental activation. After the last round is fired, the slide is held to the rear, a feature desired by most experienced shooters.

Disassembly is similar to other guns of this type, but a tool may be required. After double checking to make sure the gun is unloaded and the magazine removed, a hole in the slide is aligned with the takedown pin that runs through the frame and engages the barrel underlug. This pin must be pushed out if it doesn’t fall out by tapping or shaking the gun. Once the pin is out, the slide can be removed from the front of the frame, and then the barrel, recoil springs, guide rod and barrel can be separated.

The RM380 is primed to be a competitive .380 ACP option for anyone looking for a modern, 6+1 capacity pistol for everyday carry. Thanks to its ultra-compact dimensions and proven design, this gun is fine-tuned to deliver close-quarters defense.