1 of 11
Photo by Steve Woods
Sig Sauer P227 TacOps
The TacOps is the pinnacle of Sig Sauer’s P227 lineup with design features that should appeal to a wide range of shooters. Shown with a LaserMax Genesis. 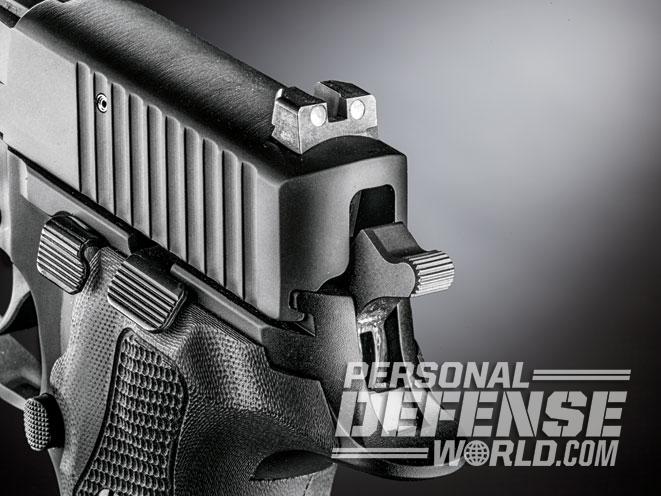 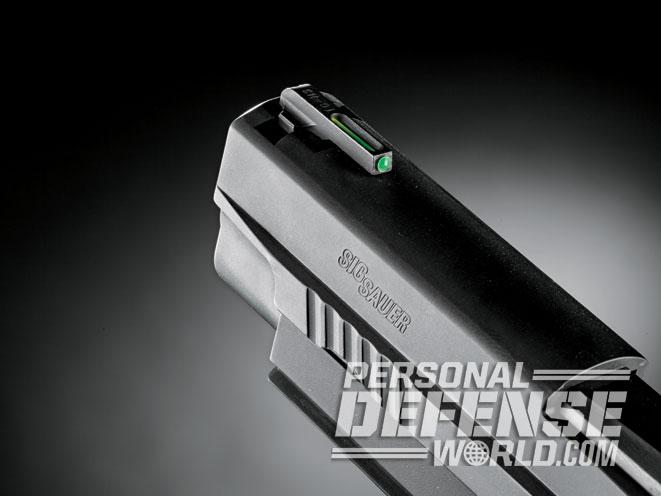 3 of 11
Photo by Steve Woods
Sig Sauer P227 TacOps
The TruGlo front sight is easy to pick up in any lighting. 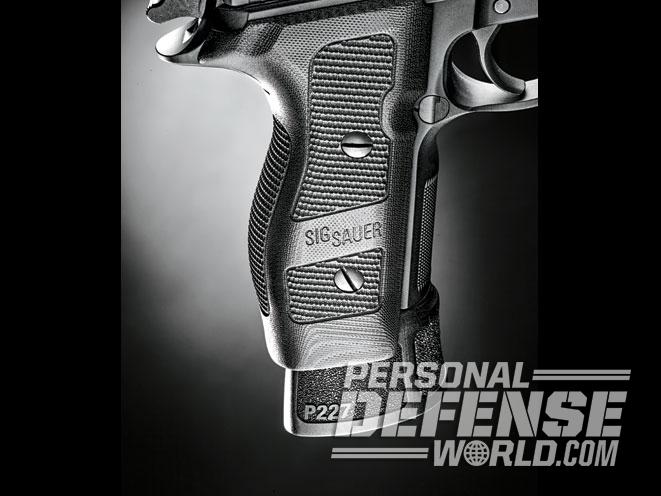 4 of 11
Photo by Steve Woods
Sig Sauer P227 TacOps
The P227 TacOps is designed to use extended 14-round magazines. 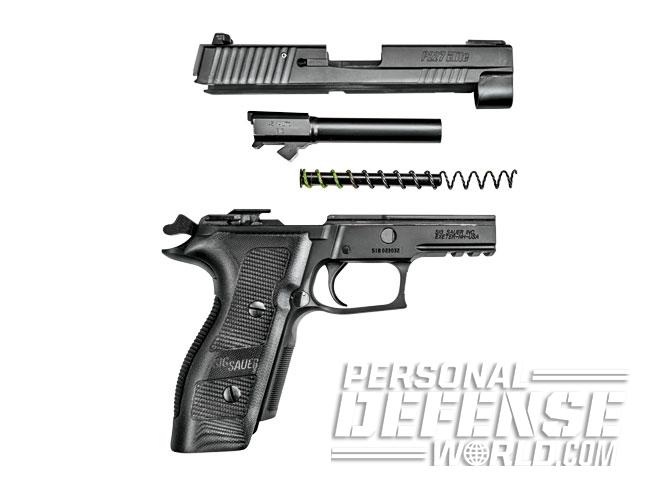 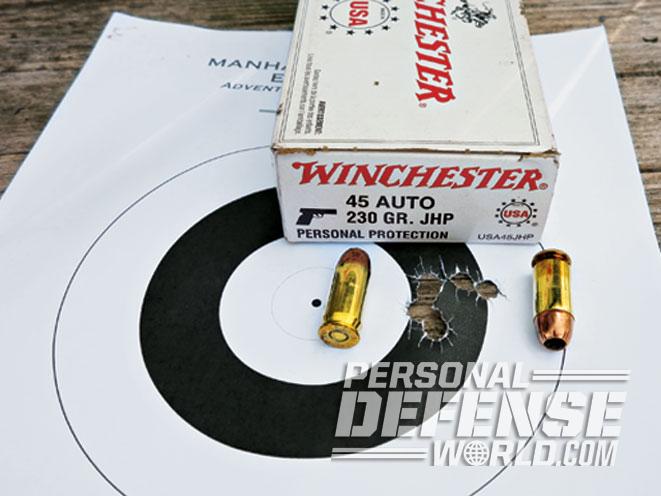 6 of 11
Sig Sauer P227 TacOps
Thanks to its sights and grip, the author could produce tight groups. 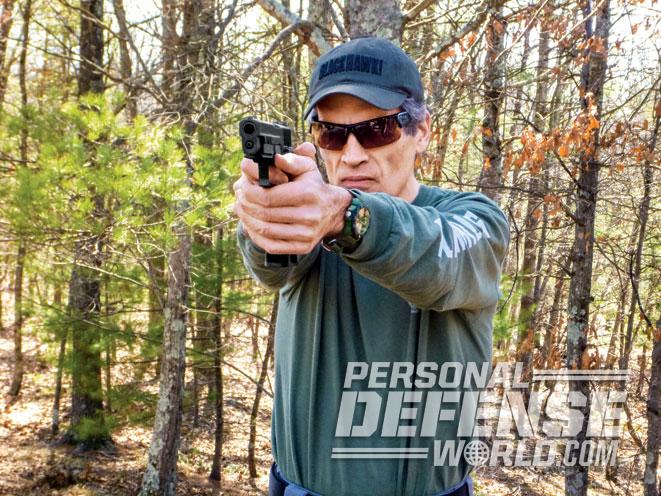 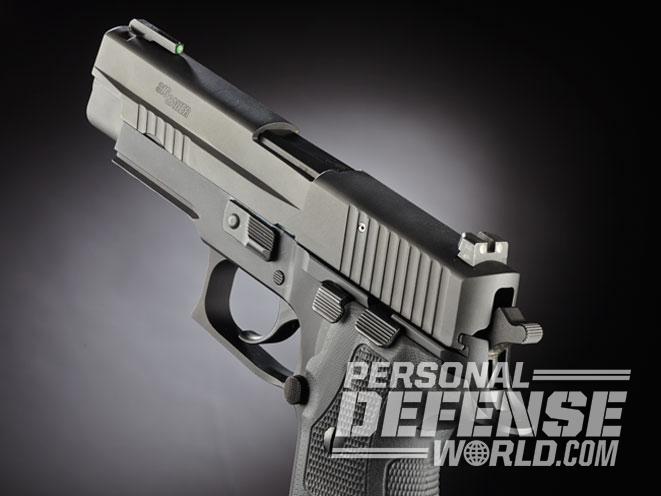 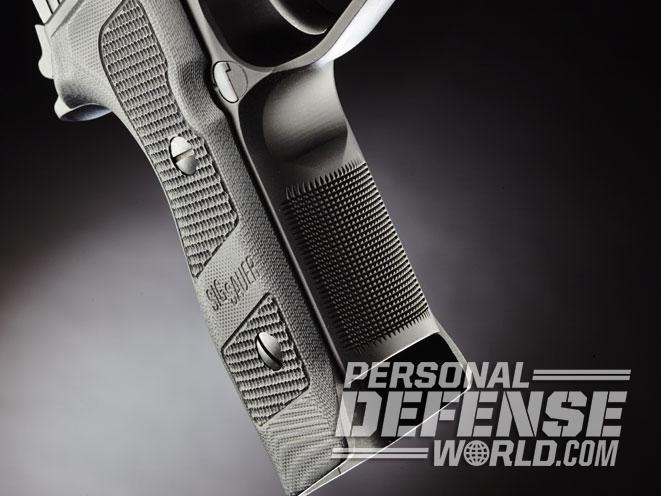 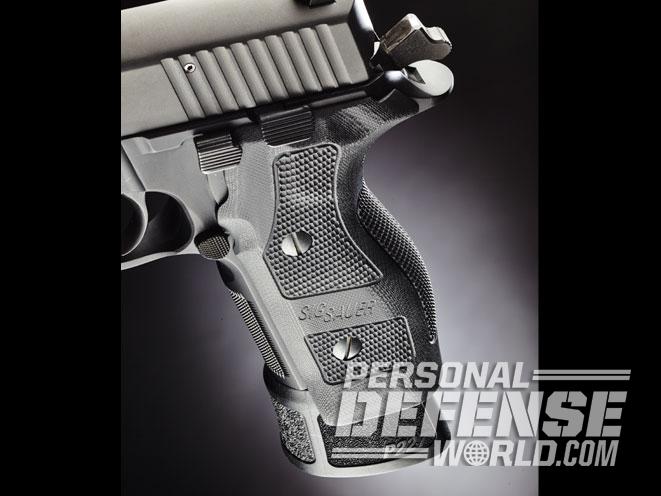 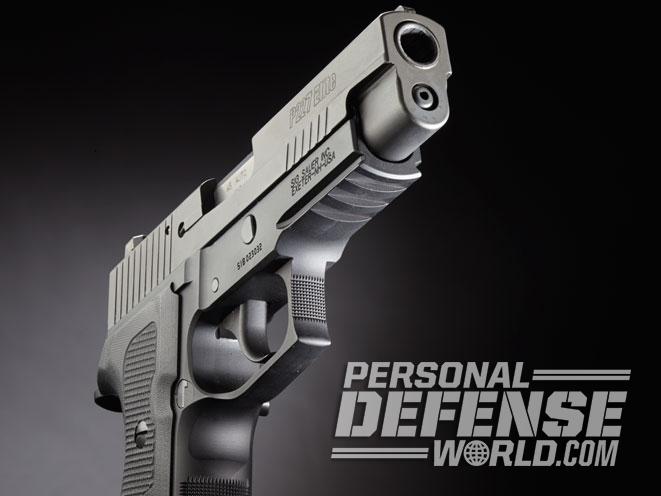 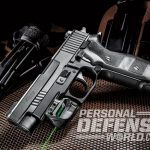 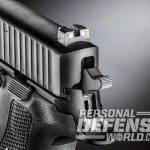 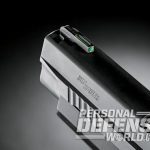 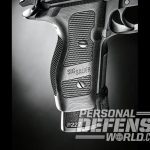 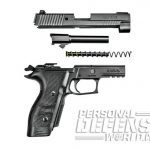 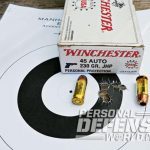 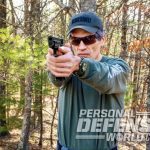 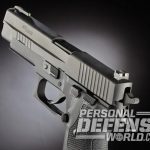 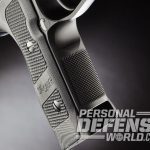 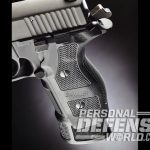 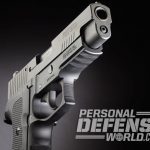 The TacOps is the newest of Sig Sauer’s P227 series of pistols that were launched in early 2013. This series now includes nine different pistols than can be divided roughly into full-sized and compact categories. The TacOps and the Tactical, however, are the most specialized models of the P227 family, and the only ones that come standard with 14-round magazines.

Make no mistake, the P227 TacOps is a full-sized, full-capacity workhorse that uses Sig’s traditional double-action (DA) with decocker trigger design. This allows the pistol to be fired in DA mode for the first round and in SA for successive rounds. The pistol has a live hammer decocker, meaning that the hammer can be lowered from a cocked, SA position to a DA position where the hammer is still connected to the trigger. There’s no manual on/off safety, nor is one needed as the pistol should only be holstered with the hammer decocked and in its DA firing position.

The TacOps is made at Sig Sauer’s Portsmouth, New Hampshire, factory and uses the Classic Elite frame. Classic frames are made from metal (aluminum alloy or steel), while the Elite designation means that the backstrap of the frame has an extended beavertail and the slide has serrations front and rear.

The TacOps uses Sig Sauer’s newest frame, which was designed to be comfortable to grasp yet hold 10 rounds of .45 ACP ammo without an extended magazine. Making a pistol that accomplishes this for users with average-sized hands has been a challenge for most gun makers, but Sig Sauer’s creative engineers have solved it with the P227 design.

In shape, the TacOps’ grips resemble the reduced-reach grips on Sig’s E2 frames. Theses grips are slimmer in width where the backstrap meets the web of the hand and where the middle finger grasps the frame just under the triggerguard. The triggerguard on the P227 frame was undercut with a wider radius just like on the Sig Sauer’s P226 X-Five competition pistol. It makes for a higher hold on the pistol and less perceived recoil, as the forces are channeled more rearward than upward.

What gives the TacOps distinctive handling versus its P227 peers, however, is the new two-piece Hogue G10 grip used only on this model instead of the thicker, one-piece plastic version. G10 is a laminate and much stronger than plastic. Its strength and ability to be custom formed make it a favorite for knife handles, and its surface texture on the grips has been milled instead of molded.

I compared the grips on the TacOps to those on the P227 Nitron. Though both are comfortable and manageable in size, the two-piece version used on the TacOps is slightly slimmer and allowed me to reach the enlarged magazine-release button without having to adjust my grip. It also made it easier to decock the gun.

The TacOps grip will attach to the other P227 pistols, but it extends about 0.75 inches below the frame on the rear and sides to form a wide funnel that enhances magazine insertion. Sig’s 10-round magazines will fit into the TacOps, but adding a bumper pad to the baseplate or trimming off the elongated section of the grip is necessary to flush fit them. In the near future, grips that fit the 10-round P227 Nitron will be offered.

The TacOps shares the same slide assembly as the P220 series of pistols, which is made from a single stainless steel billet with a black Nitron finish. Internal steel parts, including the decocker, mag release, locking insert, ejector, recoil spring guide and slide lock, are also Nitron finished. The only plastic part you will find on this pistol is the mainspring stop.

The night sights on the TacOps are far better than most and consist of a TruGlo tritium fiber-optic front and a SIGLITE two-dot unit at the rear. The TruGlo sight has a green fiber optic that really catches your attention in daylight and low light. Unlike most fiber-optic sights that work only when light is present, this sight contains a radioactive element that illuminates the fiber optic, making it also work well in darkness. Moreover, the front sight glows a different shade of green than the rear sight, making acquisition much easier than traditional night sights. The sights are made of steel, and though the rear sight is low profile, it has enough of a forward edge to allow it to catch onto a belt buckle, allowing it to be racked in an emergency where one’s hand is disabled.

Grip size, shape and texture determine comfort, but trigger reach also factors importantly into how well you will shoot your pistol. Sig’s classic pistols do not have interchangeable backstraps to adjust for trigger reach, but grips and triggers can be changed to accomplish the same thing. The TacOps comes with the Short Reset Trigger, which is not only shorter in width, but also has a different sear that reduces the reset point by 60 percent when compared to a standard trigger. Short-reset triggers allow you to shoot faster because your finger moves forward a shorter distance to reset the sear after the pistol fires.

Though the controls on the TacOps are located on the left side of the piece, lefties can work this pistol, too. To decock, use your trigger finger to slide the lever downward. To release the slide using the slide-release lever, move your thumb over the rear of the slide to reach it. Magazine drops can be done by using the trigger finger or switching the button to the right side of the frame.

RELATED STORY: ‘Have It Your Way’ with Sig Sauer’s Modular P320 Series

The P227 TacOps’ short trigger reduces the trigger reach enough to position my finger in a place where I can pull the trigger straight to the rear during DA fire. My test pistol exhibited very smooth DA and SA trigger pulls of 10.5 and 4.3 pounds, respectively.

Accuracy testing was conducted using a Caldwell rest at 25 yards using Remington 230-grain ball ammo, Sig Sauer’s 200-grain jacketed hollow point (JHP) and Winchester USA 230 JHP. All three loads shot very accurately, with average group size ranging from 1.66 to 1.87 inches, and reliably, with no stoppages in over 200 rounds tested. The TacOps’ single best five-shot group of 1.09 inches measured at the centers was shot using the Winchester load, followed by the Sig Sauer at 1.17 inches. Even the FMJ practice ammo shot well with a best group of 1.25 inches.

These are the smallest groups I have shot with a Sig “P” series pistol, and I attribute it to the sights, which are far better for me to use than the standard SIGLITE sights. The TruGlo front sight stands out distinctively from the rear in daylight and at night when the tritium glow takes over. In daylight, the front sight’s green filament stands out, while at night it is still discernable from the green glowing dots on the rear sight, making it quicker to acquire.

The P227 was controllable, and accurate rapid-fire groups could be easily delivered thanks in part to the beavertail of the Elite frame. Magazine changes were fast, and my thumb could reach the release without adjusting my grip as I normally have to with a 1911 or G21.

In combat, the first shot delivered on target is the most important, and that shot could be taken in DA mode. Firing in DA mode quickly and accurately requires a smooth trigger pull with as light a weight as possible for a reliable primer strike and trigger geometry that allows a straight pull to the rear. Scoring a good hit with that critical first shot is much easier with the TacOps than other DA pistols due to its trigger and grip designs.

The TacOps deserves its status as the pinnacle of Sig’s .45-caliber tactical pistol line. Its design has added features that a tactical operator would want compared to the standard P227: better day/night sights, more ergonomic grips and extra-capacity magazines. If the .45 ACP is your preferred caliber and you can wear a full-sized pistol and don’t mind the added height from the 14-round mags, the P227 TacOps may be just what you want, too. 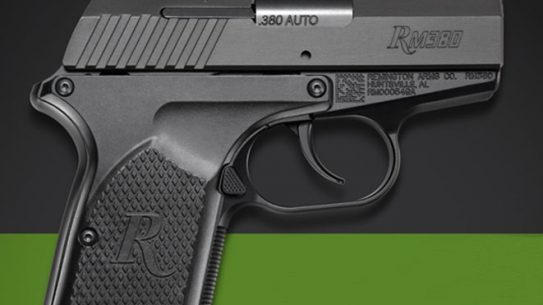 Remington updates a classic .380 ACP design with the new, pocket-sized RM380, a refined...