Among custom pistol builders, few come anywhere close to the status of Wilson Combat. Bill Wilson and his staff bring an incredibly high level of precision to every gun they produce, build or enhance. While the company’s founder originally worked on 1911 pistols, in more recent years he has expanded the company’s offerings with signature lines of customized ARs, shotguns and even Beretta 92 pistols.

Still, working on and producing various models of 1911 pistols is the company’s main focus, and the concealed-carry market has not been ignored. Many people will not find carrying a full-sized 1911 concealed to be practical or even very convenient. For this, Wilson Combat has developed the Sentinel line, which compromises nothing in power or performance against any 1911 but manages to reduce the dimensions and weight to a truly compact level. 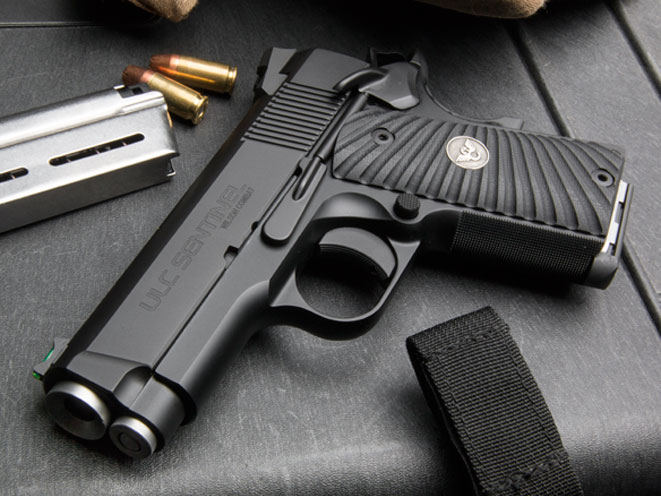 The Ultralight Carry Sentinel is chambered in the proven 9mm cartridge. Offering an 8+1 capacity, the pistol weighs just a tad over 25 ounces unloaded thanks to its aluminum frame. With an overall length of 7.2 inches, it is 1.5 inches shorter than a full-sized 1911. At only 4.8 inches in height, it is almost a full inch shorter than a standard 1911. The frontstrap features 30-line-per-inch, high-cut checkering that provides an excellent grip surface, especially when combined with the pistol’s slim G10 Starburst grips, which feature fan-shaped cuts and the distinctive Wilson Combat medallion.

Wilson has also added its own machined Bullet Proof Beavertail Grip Safety and Bullet Proof Thumb Safety, which are designed specifically for comfort and speed in competition or concealed carry. The skeletonized hammer is similarly designed to improve concealment.

The 3.6-inch, stainless steel, heavy, match-grade barrel features a tapered cone shape that dispenses with the usual bushing. This adds some weight to the front of the pistol, helping to reduce recoil and muzzle flip. Every Wilson barrel is individually hand-fitted on each pistol; fluting appears along the barrel’s length and on the outside of the chamber. This not only gives the pistol a very distinctive look but also helps trap dirt and fouling, keeping it out of the action and improving function in all conditions. The full-length steel guide rod with a reverse plug also adds weight to the front of the pistol, improving user comfort when firing.

The carbon steel slide features 30-lpi serrations on top and 40-lpi serrations at the rear to prevent glare. Wilson also added combat sights, which include a fiber-optic front sight for maximum visibility and fast target acquisition, even in low-light situations. The contoured magazine well also aids in faster reloads, and the magazine release has been rounded and shortened for concealed carry. The single-stage trigger has been fine-tuned to provide a consistent 3.5 to 3.75 pounds of resistance and an extremely crisp break. Taken all together, it is not surprising that Wilson Combat offers the Ultralight Carry Sentinel with an iron-clad accuracy guarantee of 1.5 inches at 25 yards. 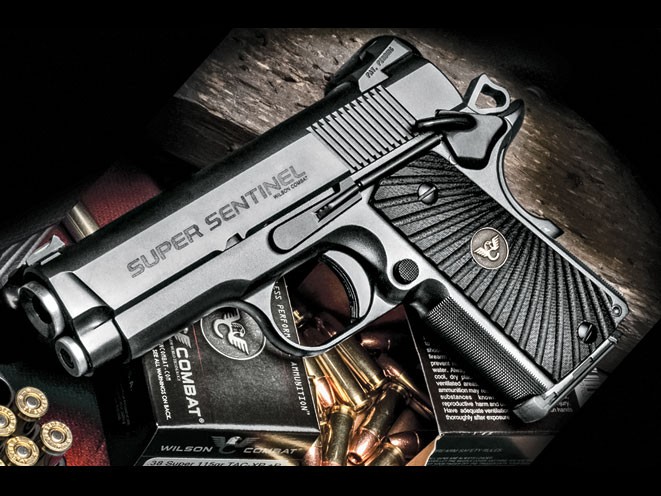 Another very interesting model in the Sentinel series is the Super Sentinel, so named because of its chambering in the high-velocity .38 Super cartridge. This cartridge is similar in dimensions to the 9mm, which allows for 8+1 capacity in a single-stack magazine, but it is also a bit longer. The main advantage is that the .38 Super offers performance that is unique to the cartridge. Think of it as something along the lines of a long 9mm, offering enhanced performance and very impressive capabilities. 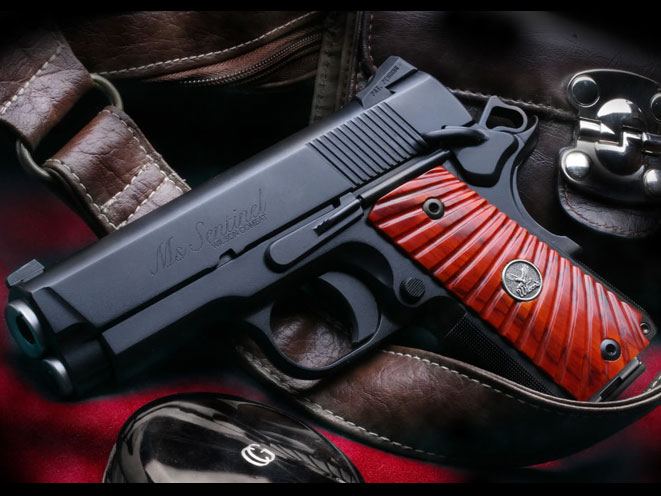 Women make up one of the fastest-growing segments of the gun-owning population and are also a growing percentage of concealed-carry license holders. It is hardly a surprise that the discerning female shooter would want the best for her personal protection, and thus Wilson Combat developed the Ms. Sentinel.

In addition to posessing many features of the Sentinel line, the Ms. Sentinel is chambered in 9mm to provide a good defensive load with minimal recoil. It features a lightweight, subcompact aluminum frame with a round butt that helps prevent printing against clothing. The beavertail grip safety and Commander-style hammer have been modified for improved concealment. The magazine release has been shortened and rounded for more reliable operation, especially with off-body carry options such as in a purse or day planner.

Carry cuts at the front of the short slide make re-holstering easier and allow for greater manipulation of the slide without the need for front slide serrations. The short trigger design is specifically intended for use by those with smaller hands. The countersunk slide stop ensures that the pistol stays in action with no unintentional pressure pushing the slide stop out, and it allows for the unobstructed use of grip lasers such as those from Crimson Trace.