4 Air Guns For Your Next Training Session

They may look like cartridge-firing 1911s, but these air pistols are built for .177 BBs. Clockwise from top left: Crosman's GI 1911 BB in a World War Supply U.S. M7 holster; the Remington 1911 RAC; the Winchester Model 11K, and the Umarex Colt Commander.

My very first handgun was a World War II-era Model 1911, and I could not hit the broad side of a barn with it! Fortunately, there were very few barns where I lived in the Southern California desert, but there was this wonderful sand berm just outside of town that folks used as a shooting range on weekends, and it was there, over time, that I became proficient with the Model 1911.

The cost of that training experience, even in the late 1960s, wasn’t cheap. Over time, I improved my motor skills and muscle memory by practicing draws and firing routines—exercises that include the swift but well-timed release of the thumb safety, placement of the trigger finger, activation of the slide and magazine releases, reloading, releasing the slide and reacquiring the target after each shot. I wish back then that I knew what I know now and that there had been air pistols like the Umarex Colt Commander and Remington 1911 RAC. With these air guns, I could have learned a lot for just pennies on the dollar!

In terms of training exercises, there are numerous advantages to using 1911-style air pistols, as these duty-sized handguns operate the same way as a cartridge-firing Colt .45 ACP. Specific training regimens can be practiced with these “blowback” air pistols, right down to loading the magazine, chambering the first round and pulling the trigger. This also helps to improve skills such as trigger control and sight acquisition, particularly with this type of air pistol because the slides on the Umarex Colt Commander and Remington 1911 RAC actually function with each shot. All that is missing is recoil, and you can see the results of your efforts with .177-caliber BBs on your target for only pennies, rather than the cost of .45 ACP ammunition.

Gaining familiarity with a cartridge-firing pistol and its operation by using a perfectly matched air pistol is affordable and efficient, ideal for youth or remedial training, and there’s also just the plain fun of it. Once you shoot a live-action BB gun, it’s hard to stop until you run out of CO2, and, best of all, most top-quality 1911 models retail for less than $150. 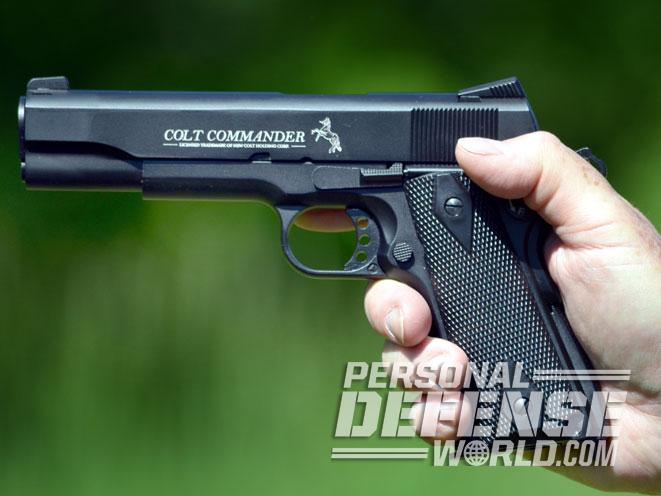 The Umarex Colt Commander and Remington 1911 RAC (both are manufactured in Taiwan and share identical features) are the most exact in detail and operation to a 1911. The Umarex and Remington models are fully licensed products and are accurate down to the smallest details. Closely duplicating the physical appearance, weight and balance of the cartridge-firing models, the Colt Commander and Remington 1911 RAC pistols operate with the power of a single 12-gram CO2 capsule contained within the magazine (rather than inserted separately into the grip frame). In addition to the CO2 capsule, the precisely sized 1911-style magazine also contains a channel for 18 steel, .177-caliber BB rounds. Extra magazines can be purchased and used for tactical reload drills.

In a blowback-operated air pistol, the CO2 capsule performs two functions, propelling a BB downrange at an average velocity of 325 fps and operating the recoil of the slide to recock the hammer and chamber the next BB. Each pistol’s all-metal construction (including the magazine) provides a hefty feel in the hand (34 ounces), approximating the weight of a real 1911.

The Remington 1911 RAC, priced at $129, features an early-style 1911 hammer and trigger, early-style front and rear sights and checkered, wood-finished grips. During WWI and WWII, Remington manufactured Colt Model 1911s to meet U.S. military demands, and today Remington manufactures its R1 series of 1911s and lends its name to the air pistol version. Both models have military lanyard rings at the bottom of the backstrap. Every aspect of handling these 1911 air pistols is a training experience.

There are also several special versions of the Colt 1911, including the KWC Tanfoglio Witness, which features a raised/checkered mainspring housing, an early-style Colt hammer and original-style sights. One of the most authentic 1911 blowback action air pistols is the Gletcher CLT 1911. This new model features a 1911A1-style hammer, sights, and thumb safety, along with the circa-1924 raised mainspring housing, and a lanyard loop. This model retails for $150. Lastly there is the Blackwater tactical version with a dust cover accessory rail, a skeletonized hammer and trigger, and a Blackwater-stylized slide. It also retails for $200. These models are identical in operation to the Colt and Remington and are available through Pyramyd Air.

One of the oldest names in air pistols is Crosman. This fabled American brand offers a full-action 1911 called the GI Model 1911BBb. This model also features a blowback action, however the Crosman is a unique design with a separate BB reservoir that holds 20 BBs delivered downrange at an average velocity of 450 fps. The exterior is based on the early GI-issued 1911s and has a fixed rear sight and a small, early-style front sight. Not quite as accurate in detail, the 1911BBb does not offer all of the working features of the Colt or Remington. Instead, it uses a different-style magazine; a flat, smooth mainspring housing; an oversized DA/SA trigger; and a non-functioning 1911-style thumb safety. Crosman adds a manual safety of its own design on the right side of the frame that is set and released by the trigger finger. With a suggested retail price of $100, the GI Model 1911BBb is also the least expensive.

The Winchester Model 11K, which is manufactured in Japan and licensed by Winchester, uses yet another variation of the blowback design. Priced at $150, the Winchester 11K is the deluxe version with a matte black slide and matte cast alloy frame. The airgun features a traditional raised palm swell and beavertail grip safety, a full-sized thumb safety and slide release, an early-style hammer and a serrated trigger, all of which are brightly finished. The most important difference between this design and the Umarex 1911s is Winchester’s traditional placement of the CO2 capsule in the grip frame and a separate stick-type carrier for BBs. Like the Crosman, the Winchester design eliminates the possibility of using the air pistol for tactical reload practice.

To do a full training set, I decided to go old school and wear a World War Supply U.S. M7 shoulder holster like the one William Holden wore in The Wild Bunch. Drawing the Remington air pistol from the shoulder rig, I went through the entire procedure, from loading the magazine to working the slide, setting the safety, holstering, drawing, releasing the safety, acquiring the target and firing. I also practiced magazine changes. I repeated these exercises with the Umarex Colt Commander using a Galco Combat Master belt holster. Doing these practice regimens will help anyone become familiarized with the proper handing and operation of a 1911. 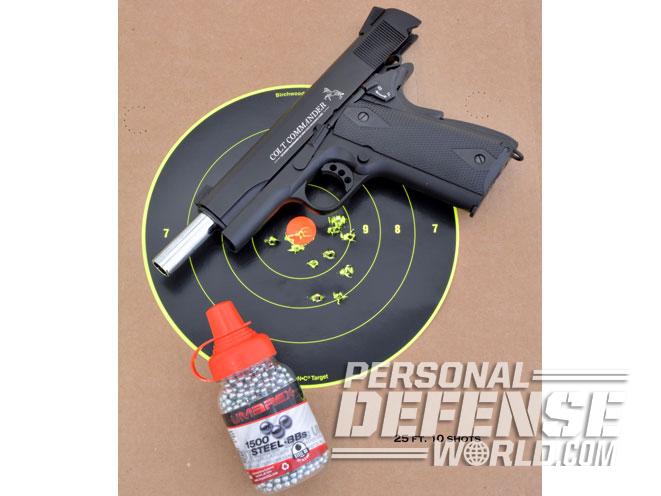 With a target placed out at 25 feet, the accuracy of the Remington 1911 RAC and Umarex Colt Commander was consistent throughout five complete reloads (90 shots). The best average 10-shot group measured 1.87 inches with the Colt Commander. While the trigger pull is light and recoil nonexistent, this is still good training practice for handling the 1911 and reacquiring the sights after the slide closes.

Training is essential for concealed carry. If a Colt 1911 was my personal preference for a concealment sidearm, having one of these highly accurate Umarex 1911 air pistols for practice drills would be an excellent low-cost option for any training regimen short of live ammo target practice. With an average price of $125, the cost of just five boxes of .45 ACP Winchester 230-grain FMJ ammunition would easily pay for one of these live-action air pistols!