by Paul Scarlata
in Guns
0

It should come as no surprise that the company that made “magnum” a household word should provide the handgun fraternity with the biggest and baddest revolver on the market—the Smith & Wesson X-Frame. Released in 2003, the X-Frame revolver was originally chambered for the groundbreaking .500 S&W Magnum, which, much to the disappointment of Dirty Harry fans, made it the “the most powerful handgun in the world.”

While the .500 S&W Mag was suitable for taking any large and/or dangerous North American game animal, there was a vocal group of shooters who wanted a flatter-shooting cartridge. As behooves any good company who wishes to please its customers, two years later, the .460 S&W Magnum arrived with a bang.

Based upon a lengthened .454 Casull case (which is little more than a lengthened .45 Colt), with a rated muzzle velocity (with some bullet weights) in excess of 2,000 fps, it was the all-time velocity champion of handgun cartridges. It should be noted, however, that S&W .460 revolvers can safely fire .454 Casull and .45 Colt ammo.

In 2014 S&W introduced what might be called a “compact” version of the .460—the Performance Center Model 460XVR with a 3.5-inch barrel. It is 8 inches shorter and 23 ounces lighter than S&W’s standard .460 Magnum revolver, and while it is still not a lightweight, it would be practical for hunting guides, hikers or campers whose wanderings take them through country inhabited by bears or other dangerous animals. While it could be used for hunting, many states have regulations regarding the barrel length of handguns used for hunting large game. Check the rules with your state’s fish and game department before hitting the woods with a 3.5-inch-barreled XVR. 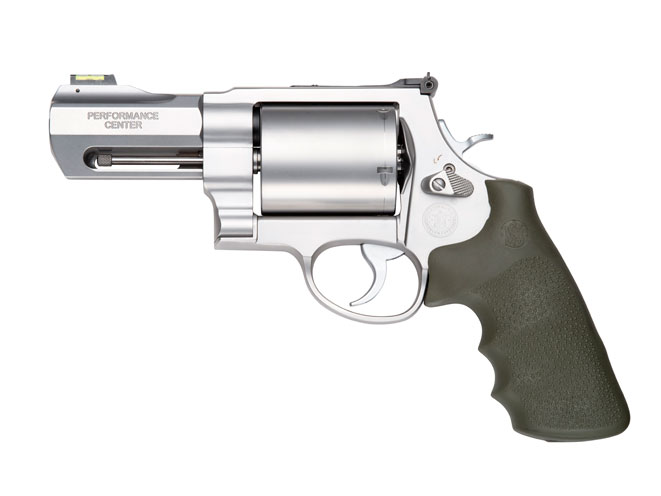 The XVR’s internal parts are identical to recent production N-Frame components, although enlarged accordingly. The right-hand sideplate is removable for cleaning and maintenance, while the left sideplate contains S&W’s patented internal security lock, which uses a key to immobilize the trigger and hammer so as to prevent it being fired by unauthorized persons.

An unfluted, five-round, swing-out cylinder of truly gargantuan proportions is locked into the frame by means of a spring-loaded center pin on the end of the solid ejector rod; it snaps into a recess on the recoil plate to lock the cylinder in place. While other S&W revolvers have a second locking pin that engages the front end of the ejector rod, X-Frame guns use a ball detent frame-to-yoke cylinder lock to provide a stronger, and much more rigid, locking system.

The barrel’s full-length underlug has an oval cutout on the right side that exposes the ejector rod. While I do not know the purpose of this aperture, I have to admit that it gives the revolver a distinctive look. A much-appreciated item is the long ejector rod, which fully extracts spent cases from the cylinder, allowing for positive unloading and fast reloading. Sighting equipment consists of S&W’s all-but-indestructible, fully adjustable rear sight and a Hi-Viz green fiber-optic sight up front.

As with all current S&W centerfire revolvers, the 460XVR utilizes a spring-loaded, frame-mounted firing pin to ignite cartridges. Despite the revolver’s massive size, the round-butt grip frame is the same size as that of an N-Frame revolver, allowing it to provide good handling qualities and permit the use of a wide range of aftermarket grip styles. 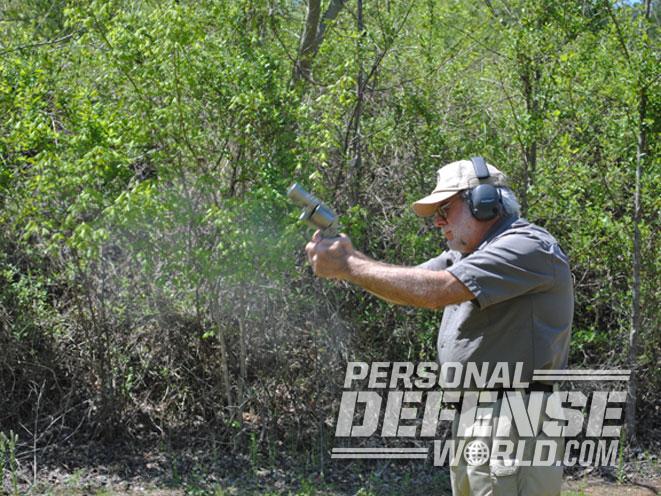 The Performance Center 460XVR I tested had a very nice double-action trigger with a smooth, stage-free stroke, while the single-action trigger broke crisply with a mere 4 pounds of pressure. I was pleased to see it was fitted with Hogue finger-groove grips that are the same style as I have fitted to all of my personal medium- and larger-frame S&W revolvers.

Considering its attenuated barrel, accuracy testing was performed from an MTM K-Zone rest at a measured 15 yards with a selection of .460 S&W Magnum and .45 Colt ammunition.

Despite the XVR’s weight and the Hogue grips, the recoil is, well, heavy-duty. It’s a .460 S&W Magnum, what else would you expect? Recoil aside, the 460XVR proved remarkably accurate and I produced a half-dozen groups, only a few of which were larger than 2 inches.

Loading the cylinder with .45 Colt ammo, I repeated the process, and in a revolver weighing 59.5 ounces, recoil was extremely manageable. With .45 Colt ammo, the 460XVR was regular pussycat to shoot. In fact, if I had to make a comparison, imagine firing a bolt-action .458 Magnum rifle and then switching to a .30-30 rifle! At first, I was surprised to see that my groups with the .45 Colt were larger than those fired with the .460 ammo, but then I realized that the bullets had to make a longer “jump” across the cylinder and into the barrel, which can have a detrimental effect on accuracy. 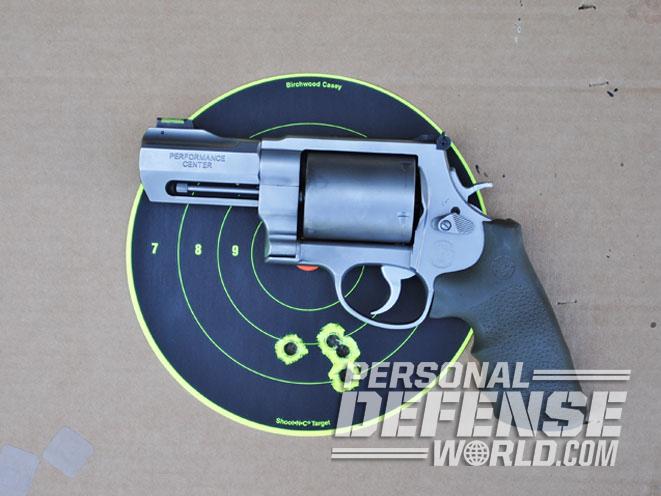 As the 3.5-inch-barreled 460XVR revolver was designed for close-range defense against large, irritated animals, I engaged a target off-hand at 25 yards with both brands of .460 ammunition. Recoil proved much more manageable firing off-hand.

The Hi-Viz fiber-optic front sight allowed fast sight alignment and target acquisition, which, along with the short, crisp SA trigger, allowed me to ventilate the target in a most pleasing manner.

While I would not consider a revolver of this size and weight as being practical for home defense, in a pinch I guess it could be used for that purpose. Being that I cannot recommend too strongly against firing .460 ammunition inside an occupied dwelling, if used for such a task the cylinder should be charged with .45 Colt cartridges.

If you need a powerful handgun for close-range protection against large, dangerous animals, the S&W 460XVR should fill the bill. And being able to use .45 Colt ammo allows 460XVR owners to practice without the expense of firing .460 ammo.