How To Build Your Own Safe Room

by N.E. MacDougald
in Home & Self-Defense
0

With proper planning, the right gear and some know-how, you can build your own safe room for your family on a budget—one that will provide shelter against a home invader for several days at a time.

Safe rooms can protect your family and friends from severe weather and a determined attack from those using hand tools or small-arms fire.

If you travel on business, consider adding a safe room for the times when you can’t be there to defend your loved ones. Several companies build safe rooms ranging from modest and simple to large and lavish. When the stock market took a nosedive in the fall of 2008, I decided it was time to build a safe room for my family in case of civil unrest. The most secure (and least expensive) safe rooms take advantage of existing basement walls, which usually are poured-in-place, reinforced concrete. Unless you live in a log or stone home, you’ll need a basement stronghold to keep family and friends secure.

A basement corner is particularly advantageous for building a safe room because two walls are already in place. If your basement has an area bordered by three walls, all you need to do is build the fourth and add a door. I used masking tape to lay out the space for building my family’s safe room. It would accommodate three or four people in a pinch. On the whole, you’re better off having a room that’s too large than one too small. You can keep valuables like food, firearms and ammunition in it. 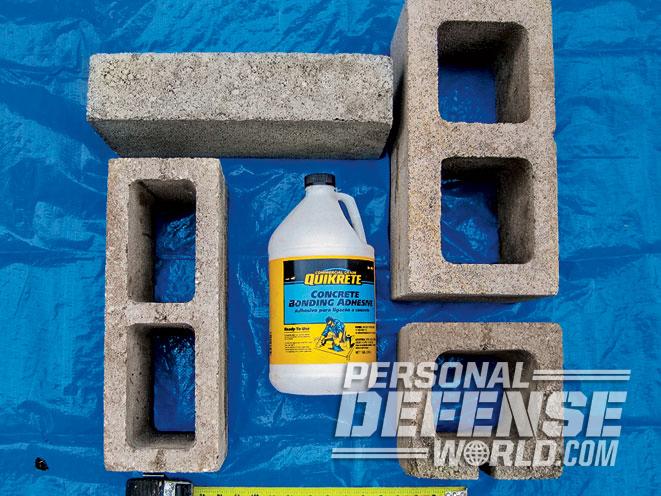 Opting for 6-by-8-by-16-inch, hollow, heavy-wall block, I paid about $0.75 a piece at the time. The price has almost doubled since 2008. Another good option is using 4-by-8-by-16-inch solid blocks. Most modern concrete blocks have a notch for inserting reinforcing steel bar (rebar). I didn’t use rebar in case the wall later had to be demolished for some reason. Decades ago, I’d done enough repair work on a brick wall to know that I was lousy at masonry. I discovered an alternative to mixing mortar and applying it with a trowel: Quikcrete concrete bonding adhesive, which works for above-grade applications. I bought a couple of gallons of the stuff and used old paintbrushes to apply it.

Using a chalk line on the concrete floor as a guide for the first course (layer of block), I set to work. Applying the white adhesive liberally to the floor and a few blocks, I waited until the adhesive was tacky and set each block in place. The liquid adhesive provided adequate working time before setting. As it dried, it became transparent, which made the finished product look more professional. For end-to-end joints, I applied more adhesive because end joints don’t have the weight of the block itself to compress them. I bought half blocks to stagger the joints for each course. The first course was straight, so subsequent ones also would be straight if I was careful. I laid a couple of courses, took off my adhesive-soaked gloves, capped the gallon jug and quit for the day.

In the morning I returned to determine if the adhesive was as strong as advertised. I couldn’t budge any of the blocks by kicking them. Encouraged, I continued working. The shorter wall went more quickly. Unloading the blocks from the truck, carrying them downstairs and lifting each one into place turned out to be excellent exercise. The most difficult part of building the wall: tight spaces between the furnace and the existing sheetrock wall. In a couple of places I had to use 4-inch-wide blocks because 6-inch blocks wouldn’t fit.

While hollow block is stout enough for many applications, I thought it needed to be a little bit stronger for use as a safe room. To strengthen hollow block, you can fill the voids in each block with sand, pea gravel or concrete. I chose sand because it flows easily through the staggered voids and because mixing concrete is labor intensive and relatively permanent. Almost a ton of sand went into the wall, and when completed, the wall itself weighed a couple of tons. A concrete basement floor can withstand this kind of load safely. Such a wall built on a conventional wooden subfloor, however, would certainly break the floor joists.

When completed, the safe room walls looked like they’d been built as part of the house. People’s eyes tend to skim over a featureless concrete block wall. No one asked about the new wall, including people who visited the house frequently.

Because the furnace was incorporated in the safe room—make-up air for the furnace was ducted from outdoors—it needed no additional heat. An unanticipated benefit of the concrete-block walls was that the adjoining office was quieter because the walls muffled the noise from the forced-air natural gas furnace.

Our safe room was now complete, except for the wall within a closet. There was no room for a block wall in the closet if it were to remain functional, so I removed the existing drywall to expose the studs. I drew a sketch, including dimensions, and faxed it to a steel vendor, ordering 0.38-inch mild-steel plate (0.5-inch steel plate provides better security but weighs more). A friend helped me pick it up and load it on my truck. We muscled the pieces into the room, drilled holes in the steel and bolted it to the studs. The installed steel plate was later finished in drywall, taped, textured and painted to match the rest of the room. When ordering steel plate, ask the vendor to cut each 4-by-8-foot sheet of steel plate in half lengthwise. This cut will add slightly to the cost but will facilitate handling it. A full sheet of 0.38-inch stock weighs 480 pounds (a sheet of 0.5-inch mild steel weighs 653 pounds), which probably exceeds what you can lift safely.

While my experience is limited to using concrete block and sheets of steel to construct a safe room, other materials can be used. What you use depends on what you have on hand. Brick, for example, is excellent. Wood is a worthy substitute, but you’ll need more thickness to achieve the same level of protection from small arms. End grain is the toughest, but understand that cutting short lengths of wood for building safe room walls is extremely tedious and time consuming.

The safe room provides security for my family and loved ones. While we hope that we never need to seek refuge inside it, we’re glad it’s there. When I’m away from home, my family can remain inside while using a cell phone to call authorities if needed. Gun ports are a good idea because they enable firing from behind cover. After it’s built, you or your contractor can camouflage the safe room by adding a layer of drywall or stacking boxes and possessions against it. Most basements are full of holiday decorations, boxes of books and the kids’ high-school trophies. Why should yours look any different?

Editor’s Note: N.E. MacDougald recently wrote a book under the SOF banner for Skyhorse Publishing. Titled Soldier of Fortune Guide to Surviving the Apocalypse: The Ultimate Source for Protecting Your Family Against Societal Collapse, the 200-page book features color photos. Look for it online or on shelves.