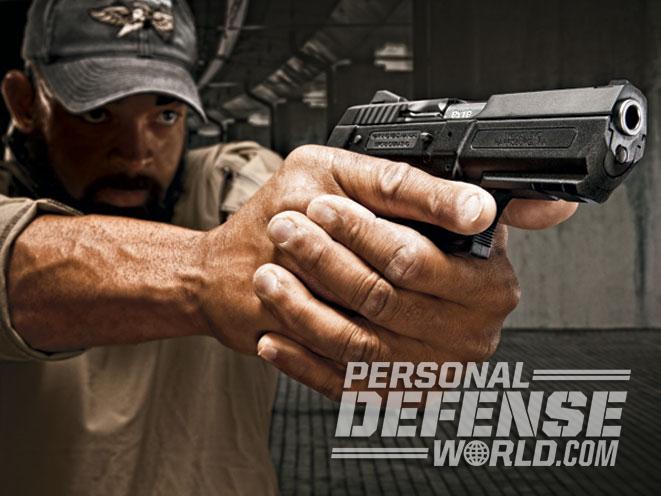 "Based on the well-respected CZ 75, the Jericho is a good value for the person seeking a mid-sized semi-auto for carry or home defense."
(Photo by Straight 8 Photography)
Comment(s)

Israel Weapon Industries (IWI) has reintroduced the Jericho 941 pistol to the American market. Based on the well-respected CZ 75, the Jericho is a good value for the person seeking a mid-sized semi-auto for carry or home defense. 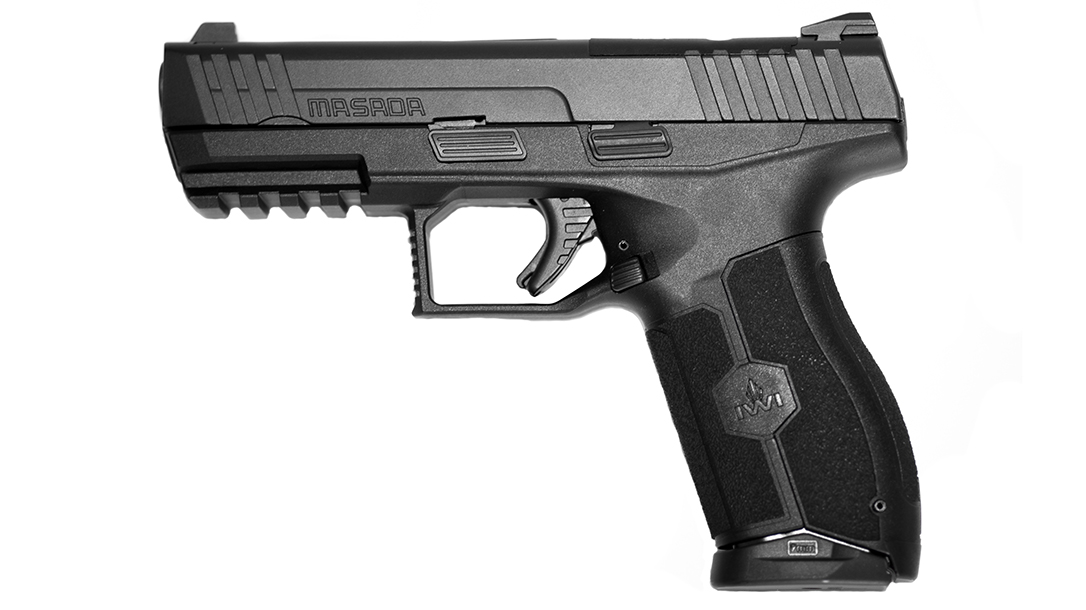 Return of the IWI Jericho 941

The Jericho is a well-built and rugged pistol that has the original CZ 75 double-action (DA) operating system. Jeff Cooper was a fan of the CZ because its frame-mounted safety allows it to be carried with the hammer down in DA mode or “cocked and locked” like a 1911. Therefore it’s relatively easy to transition between a single-action (SA) semi-auto and the Jericho 941.

The Jericho conceals well under a light jacket or in a medium-sized handbag. Even so, it can be loaded with 17 rounds of powerful 9mm +P ammunition, making it a formidable handgun for street carry or home defense. Its light weight makes it comfortable to carry, and all exterior surfaces are nicely rounded to prevent damage to clothing or small cuts on the user’s hands. In addition to having a frame-mounted manual safety, the Jericho 941 also has an automatic firing pin safety and a disconnector. Unlike many other DA semi-autos, the Jericho does not have a decocker, so decocking must be done with the muzzle pointed in a safe direction.

The Jericho 941 PL/RPL has a number of desirable features. These include tactical three-dot sights (night sights will be a future option), a lowered and flared ejection port, a Picatinny rail on the dust cover for mounting lights and/or lasers and a squared and undercut triggerguard. In addition, it has a beveled magazine well, a raised magazine release and a smooth, rounded trigger face.

The sturdy polymer frame is designed to facilitate a firm grip. Finger grooves and striations on the front of the frame enhance the shooter’s grip, and the arched, grooved and partially checkered mainspring housing gives the gun a very solid feel in the hand.

The Jericho points naturally on target and the sights come up right in front of the dominant eye. When grasping the pistol, the dished surface of the frame-mounted safety is right under the shooter’s thumb, where it can be quickly disengaged. The slide release also has a dished surface that makes it easy to operate. But that’s not all! When the shooter uses a thumbs-forward, two-handed grip, the dished surfaces of the safety and slide release put your thumbs in exactly the right place for a solid hold.

Unlike a lot of semi-autos, field-striping the Jericho is quick and efficient. Unload the gun completely, then line up two dots on the right-rear of the slide and frame and push the takedown pin out to the left. The takedown pin protrudes about 0.125 inches from the right side of the frame. It’s a bit high, but it makes the slide release very easy to remove.

It also provides good tactile feedback when your trigger finger is in the right position. Once you remove the slide lock from the pistol, the slide slips off the front of the frame and the recoil system and barrel can be removed. Be careful to notice how the short recoil spring fits within the long one. They must be properly placed on the recoil spring guide when reassembling the pistol.

Once the pistol was apart, I was able to thoroughly inspect the gun for internal and external signs of poor workmanship. There were none. Fit and finish were excellent. The matte black slide matched the color of the polymer frame. There were no scratches or tool marks. Conformation of the locking lugs on the 4.4-inch barrel was excellent and the feed ramp and throated chamber were nicely formed and polished. The parabolic rifling of the barrel was evenly recessed at the muzzle to help prevent damage to the bore.

Slide-to-frame fit was tight and the hammer could not be pushed off the full- or half-cock positions. Extractor tension was good. The SA trigger pull was a very consistent 6.75 pounds and the DA pull was an equally consistent 10.5 pounds. The SA pull did not stack at all. There was about 0.375 inches of take-up and then a very smooth release after the trigger traveled about another 0.125 inches.

I tested the Jericho for velocity and accuracy from the bench. Meanwhile, I tested its handling qualities at a Bullseye match and by running tactical drills. I had a broad variety of 9mm ammo to test, so I included nine different loads in the testing.

The test ammo cartridges had bullets that ranged from 84 grains to147 grains in weight, and included both standard-pressure and +P loads. The most important finding from the live-fire testing was that the Jericho was totally reliable with everything fired through it.

Given that the loads had so many different weights of bullets, the range of velocities was very broad. Readings ran between 906 and 1,265 fps. Therefore it’s not very meaningful to compare loads by looking at their velocities. In this situation measuring both velocity and bullet energy probably gives a better idea of relative performance of the various loads.

The most powerful load tested was Winchester’s 124-grain +P PDX1. It produced an average muzzle velocity of 1,241 fps and 424 foot-pounds of energy at the muzzle. Remington’s 115-grain jacketed hollow point (JHP) also performed quite well; it left the muzzle at 1,250 fps and generated 399 foot-pounds of energy. None of the defense loads produced less than 298 foot-pounds of muzzle energy, which is clearly a step above .38 Special +P performance.

I measured accuracy by firing three 5-shot groups from a benchrest at a distance of 15 yards. The most accurate single group came from Hornady’s Critical Duty 135-grain +P load. All five shots were in a tight 1.36-inch cluster. Three other loads shot at least one group that was under 2 inches. ICC’s Duty & Defense load, with a sintered metal hollow-point bullet, grouped at 1.44 inches. PolyCase’s 84-grain Inceptor, with its polymer/copper bullet, shot a 1.66-inch group and CorBon’s 115-grain, all-copper DPX +P ammo shot a 1.8-inch best group. Average accuracy for all three targets shot with each load measured between 2.34 and 3.35 inches. This is excellent consistency. It’s also important to note that all loads shot to point of aim, regardless of bullet weight or velocity.

Results from the informal Bullseye match at the Flagler club were very good for a duty gun with fixed sights. The Jericho’s best score was on the rapid-fire segment of the club’s “Army L” portion of the match. I used an Isosceles stance and scored 98-4X at 15 yards. That’s plenty fast and accurate for a gun not designed for competition shooting.

Action drills performed at an earlier range session also produced good results. The drills involved drawing the Jericho 941 PL/RPL from the holster and shooting five-shot strings at three silhouette targets during each string of fire. The first target got two shots to the body, the second two to the head and the third got one to the head. I fired two strings at 3 yards and two at 10 yards. Also, I fired the first shot from the holster in the DA mode. The drill began on a random beep from a Competition Electronics timer and ended after the fifth shot. Average time for the two runs at 3 yards was 8.38 seconds at 3 yards. The average was 12.63 seconds at 10 yards. My score was 90 percent at 3 yards and 70 percent at 10 yards. There were no misses to report.

The Jericho 941 PL/RPL is a well-made and reliable pistol that’s easy to handle. Its trigger is quite good and the gun points naturally. Priced at $559, it offers good value for someone who wants a lightweight, mid-sized, high-capacity, semi-auto pistol for personal defense or recreation. For even more info, please visit IWI.us. 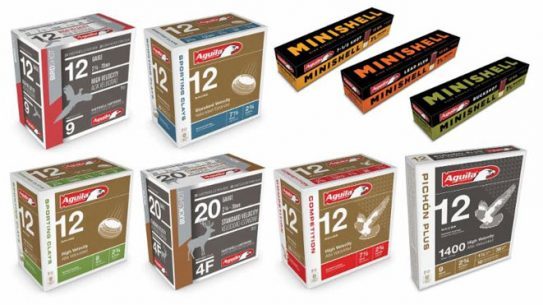