by Jay Pinsky
in Guns, Handguns
0

Kimber’s Custom TLE/RL II harnesses the power of the 10mm in a highly refined package built for tough duty applications.

Kimber builds serious 1911s. The 10mm is a very serious caliber. So, it makes perfect sense that the New-York-based gun-builder chambered its tactical 1911 platform, the Custom TLE/RL II, in a round meant to settle gunfights once and for all. The 10mm makes no apologies for being stout, and Kimber didn’t hold back in building a reliable and superbly accurate pistol when it created its Custom TLE/RL II.

Kimber’s story begins long before the 10mm’s creation. Greg and Jack Warne founded the company in Oregon in 1979, producing superb .22 LR rifles. They wanted to grow, but things just didn’t work out. So, Kimber of Oregon was sold, but the new owner eventually had to file for bankruptcy. The Kimber name endured, but its assets were gone. In the mid-1990s, Greg Warne found financial backer Les Edelman, then owner of Nationwide Sports Distributors, and Kimber of Oregon evolved into Kimber America and began to come back to life. Edelman leveraged his investment in a New-York-based tool company called Jerico Precision Manufacturing and gained a majority interest in Kimber America. He saw the potential of combining Kimber’s reputation with Jerico’s industrial footprint and began building 1911-style handguns. Now Kimber has factories in New York and Montana, and it builds 1911s, other handguns and some very fine rifles. In fact, Kimber is now America’s largest manufacturer of 1911s. 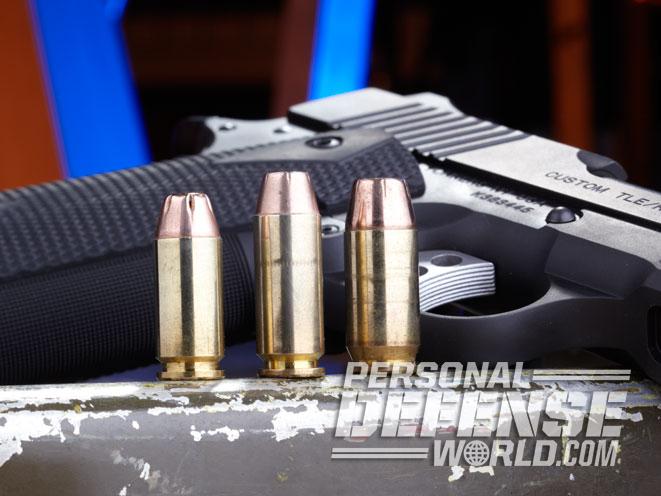 While the 1911 had the genius of John Browning, the 10mm had the genius of Marine Corps Lieutenant Colonel Jeff Cooper. He created the cartridge to give handgunners the stopping power of the .45 ACP but with better—actually much better—ballistics. a high-quality 10mm load, like Hornady’s XTP ammo, can send a 180-grain bullet down a 5-inch barrel at about 1,300 fps, giving its shooter nearly 700 foot-pounds of energy (fpe) at the muzzle, a far cry from the .38 Long Colt. Shooters can go bigger with 200-grain bullets getting pushed at similar velocities and whacking intended targets with more than 700 fpe from the muzzle. The 10mm was certainly a winner in the knockdown power contest, and some loads only drop as little as 4 inches at 100 yards.

Unfortunately, the 10mm was every bit the brute Cooper intended, and many folks who wanted lots of bite couldn’t handle its bark. In a well-chronicled saga, the FBI fell in love with and then divorced the 10mm because many of its agents simply couldn’t or wouldn’t shoot the robust caliber accurately. In fact, it was the FBI who first diluted the 10mm’s potency by requesting that Federal calm the beast down. The company did by creating what was first known as the “10mm Lite,” which eventually became the .40 S&W. 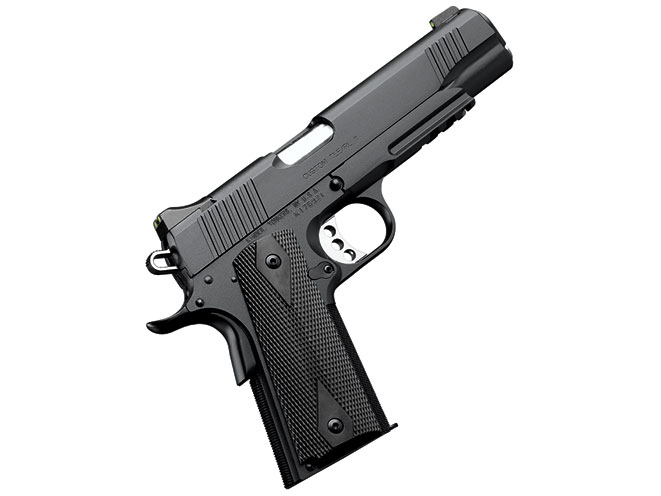 Not everyone who met the 10mm asked for training wheels, though. Hunters who liked using pistols, competition shooters and tactical users who wanted the 10mm power advantage made the Jeff-Cooper-inspired caliber a popular enough choice to keep it around as more than just an afterthought. Several manufacturers like Colt, Glock and Smith & Wesson started chambering pistols in the metric monster. Since the caliber had plenty of pep, gun manufacturers had to make their guns right the first time for them to be reliable and accurate.

Kimber is one such gun-maker, and the folks at Kimber helped debunk some rumors about the 10mm being a bad caliber. “The 10mm round is not the issue,” said a Kimber spokesman. “Kimber’s tolerances and an integral ramped barrel, with a fully supported chamber, solved issues previously plaguing the 1911 platform. When the 10mm first started out, it was a very hot round. Very quickly the ammunition manufactures downgraded the load, and some platforms did not perform well. This really just required fine-tuning of the firearm. This goes for the longevity as well. If the firearm is tuned properly, it should last. Kimber customers enjoy a very reliable, accurate pistol.”

Like most 1911s, the Custom TLE/RL II comes in .45 ACP, but Kimber decided a little Cayenne pepper in its lineup might serve the company well, so its engineers added the often misunderstood but never underestimated 10mm. I recently got a chance to test Kimber’s Custom TLE/RL II in 10mm.

The Custom TLE (Tactical Law Enforcement) RL II is almost identical to the Kimber .45-caliber 1911s that LAPD SWAT operators carry on duty, but theirs don’t have Picatinny rails.

I have no problem talking to you about this Kimber. In fact, the more I shot the 1911, the more I told my friends, my family and sometimes complete strangers about it. That’s what happens when you shoot a gun you like, and I liked the Kimber Custom TLE/RL II immediately. First impressions go a long way, and 1911s are no different. Lots of folks make them, many are good, but few make them as well as Kimber America.

The sturdy build fit well in my hands and the sharp, well-sculpted 30-lpi checkering on the grip instantly gave me the confidence that this handgun would stay right where it ought to, in my hands. The pistol has a steel frame as well as a match-grade, aluminum trigger that is crisp and dependable, precisely as one would expect of a fighting man’s gun. The match-grade barrel is fitted to the steel slide and is fully supported with a full-length guide rod and a stainless steel bushing for accurate and dependable performance.

My Custom TLE/RL II came with Meprolight three-dot night sights. Many 1911 gurus will point out that Kimber uses a unique BoMar-style cut for its sights. Why? According to Kimber, “The BoMar-style sight was an adjustable sight. The dovetail cut was based on a BoMar dovetail. [There was] no particular reason other than tool consistency between fixed and adjustable target sights.” While we’re at it, I might as well tell you there are indeed metal-injection-molded (MIM) parts in the Kimber Custom TLE/RL II. In fact, the Kimber representative didn’t flinch when I asked him to confirm it, saying quite frankly, “The parts are very high quality and very reliable.”

So how did it shoot? I’ll be the first gun writer to come forward and tell you I’m no Jesse James when it comes to handguns. Still, I can hold my own, and after I put a few magazines’ worth of ammunition through the Custom TLE/RL II, I thought I was ready for the OK Corral. The most accurate load was Hornady’s 180-grain XTP ammo, which shot a 1-inch group off a rest at 25 yards. To date, this is the best group I have ever shot with a handgun, and it still serves as an icebreaker when I meet new gun folks. Ammunition from Federal, Remington and DoubleTap all cycled and grouped quite well, never clustering outside 1.5 inches at 25 yards. I had no failures to feed, eject or cycle even with the significantly slower Federal American Eagle ammunition, which crawled along at only 993 fps. While all of the other ammunition sped along at well over 1,200 fps, the lighter 180-grain American Eagle load would be perfect for anyone who wanted to slowly work their way into shooting a 10mm. While it was a slower load, it was very consistent and very accurate. It was also very affordable to shoot.

The Kimber Custom TLE/RL II is a very solid, accurate, trustworthy and affordable 1911, and I am sure the .45-caliber version, although less spirited, performs just as well. If you are looking for a 1911 to carry you through your missions, on a hunt or to protect your home, it’s tough to argue with LAPD SWAT logic.