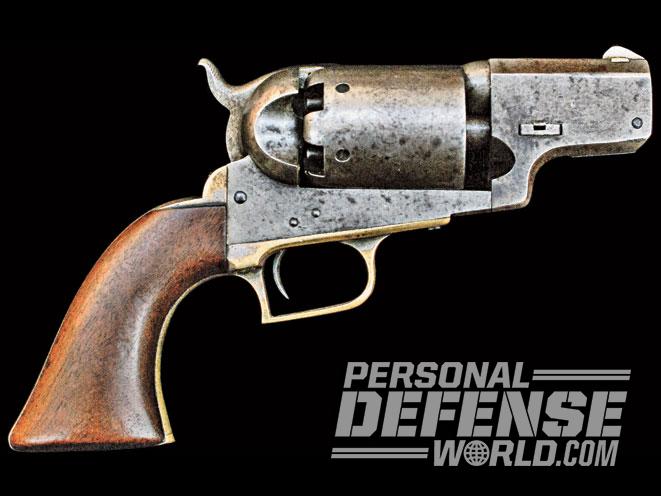 1 of 10
Photo by Dennis Adler
Pocket Pistoleros: America’s Concealed Carry Tradition
The biggest of the “belly guns,” this unusual 1st Model Dragoon was shortened to a barrel length of only 2.75 inches, literally cut off at the end of the barrel lug. This particular .44-caliber model, from the collection of Lt. Col. Gerald E. Dickerson, Jr., has a very colorful and documented history having belonged to Deputy U.S. Marshal William Stokes, who pursued and captured John D. Lee in 1874. Lee had been wanted since 1857 when he led the infamous Mountain Meadows Massacre in southern Utah. 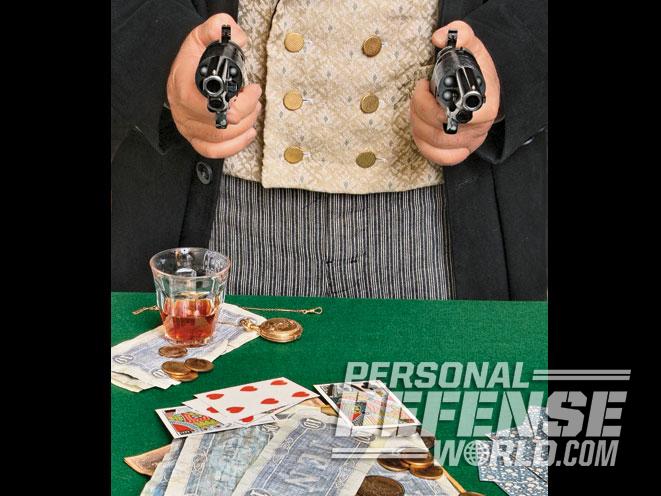 2 of 10
Photo by Dennis Adler
Pocket Pistoleros: America’s Concealed Carry Tradition
This isn’t what you wanted to see in the 1870s if you just cheated a man at cards! Gamblers and gentlemen often carried guns in unconventional holsters so as to appear unarmed in public. Lawmen also followed this practice and called it a backup gun. 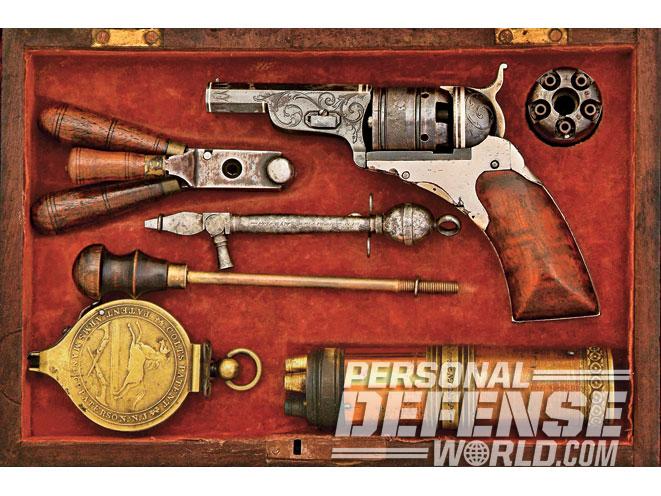 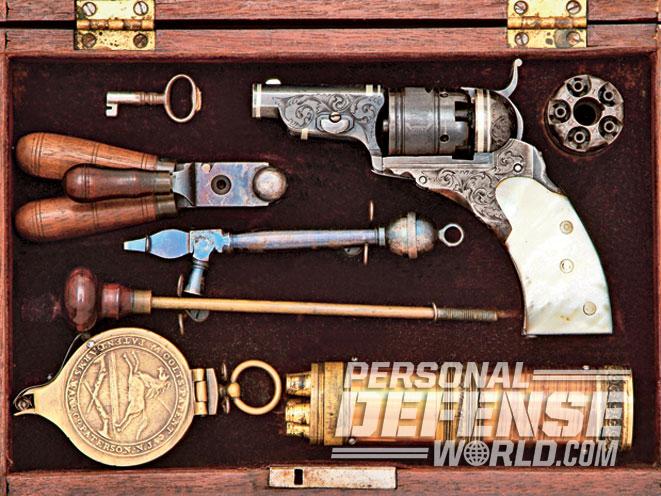 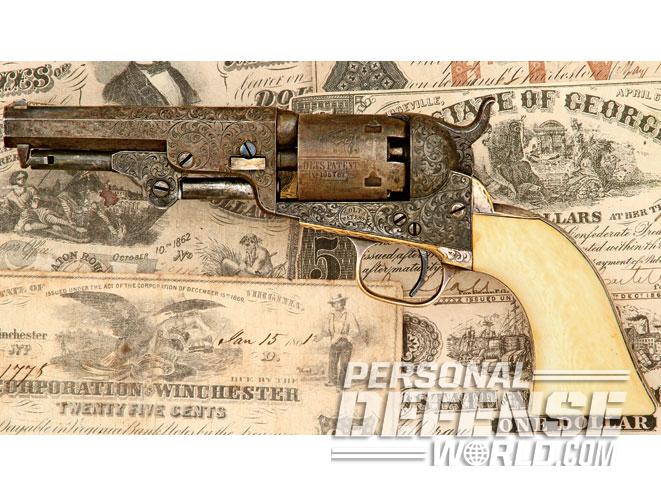 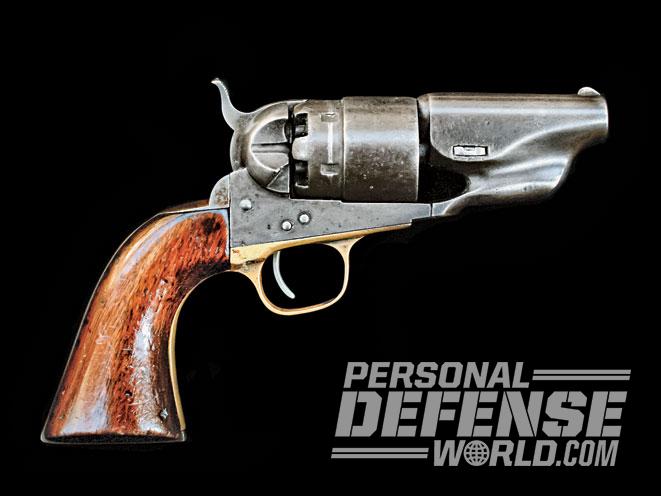 6 of 10
Photo by Dennis Adler
Pocket Pistoleros: America’s Concealed Carry Tradition
As early as the Civil War, 1860 Army models were modified with loading levers removed and barrels cut down to lengths of 2 and 3 inches. Some had dovetailed front sights added. 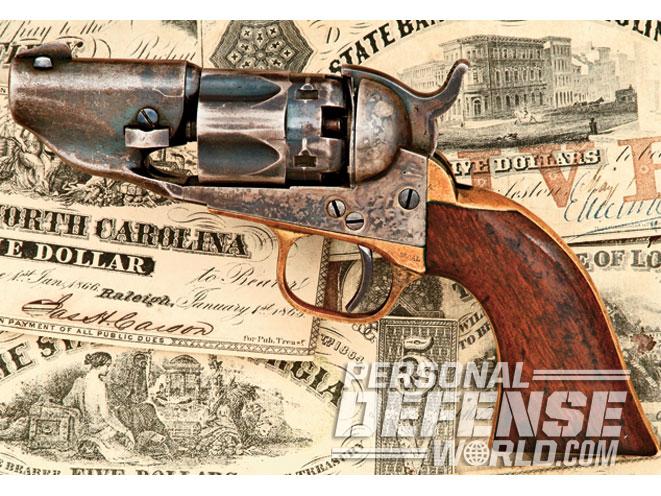 7 of 10
Photo by Dennis Adler
Pocket Pistoleros: America’s Concealed Carry Tradition
The rarest of Colt’s 1862 Police models were those built with short 2- or 2.5-inch barrels during the Civil War. Though factory records are vague, it is estimated that anywhere from 25 to 50 were built at the Hartford factory. They were about equivalent in size to the Colt Detective Specials of the late 1920s. 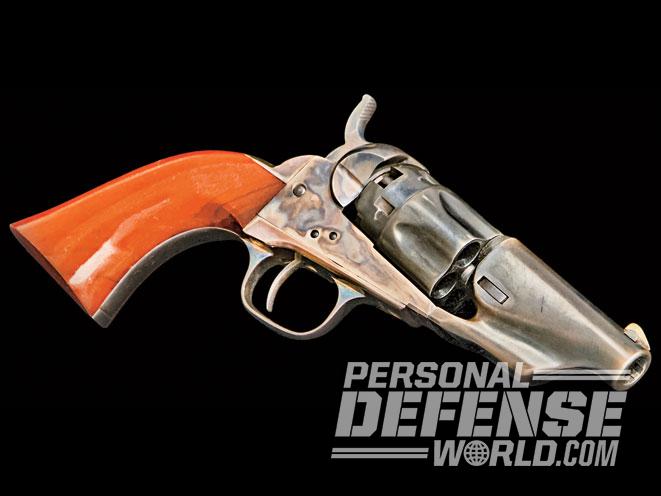 8 of 10
Photo by Dennis Adler
Pocket Pistoleros: America’s Concealed Carry Tradition
The rarest of Colt’s 1862 Police models were those built with short 2- or 2.5-inch barrels during the Civil War. Though factory records are vague, it is estimated that anywhere from 25 to 50 were built at the Hartford factory. They were about equivalent in size to the Colt Detective Specials of the late 1920s. 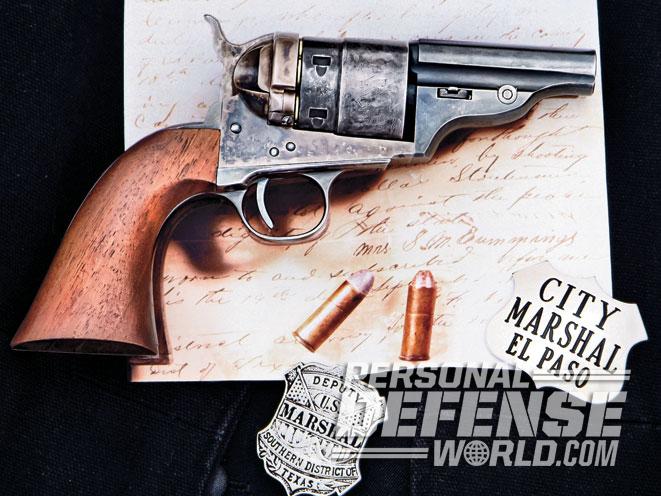 9 of 10
Photo by Dennis Adler
Pocket Pistoleros: America’s Concealed Carry Tradition
Dallas Stoudenmire was a former Texas Ranger who became city marshal of El Paso, Texas, and deputy U.S. marshal for the Southern District of Texas in the early 1880s. Among the guns he carried was a modified Richards-Mason 1860 Army .44 Colt with the ejector removed and barrel shortened to 2.62 inches. The gun was just slightly larger than many of today’s snub-nose .38-caliber revolvers. 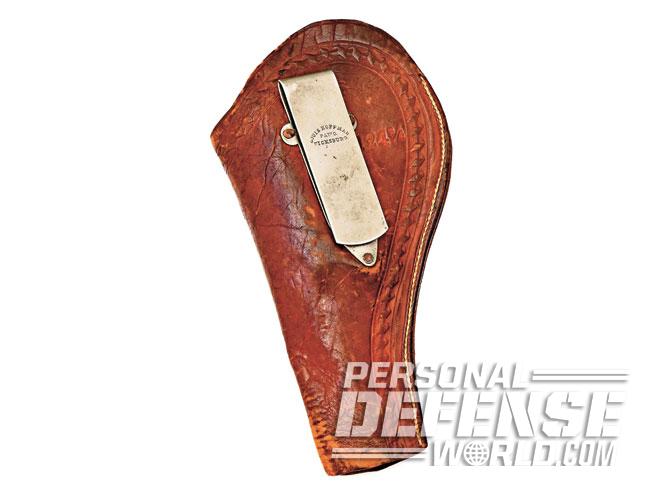 10 of 10
Photo by Dennis Adler
Pocket Pistoleros: America’s Concealed Carry Tradition
In the 1870s, Mississippi merchant Louis Hoffman began marketing the Hoffman “Royale” spring clip holster, which could be carried without the use of a gun belt. This is one of the earliest known examples of a concealed-carry holster using a spring clip device, circa 1874. (Holster courtesy Chisholm’s Trail Leather) 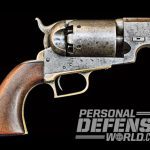 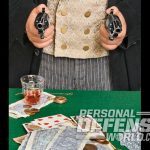 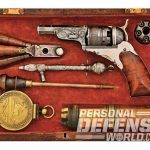 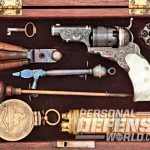 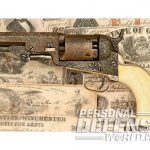 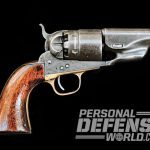 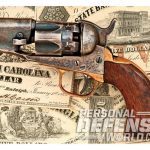 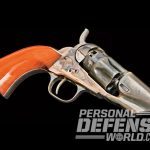 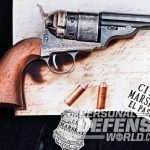 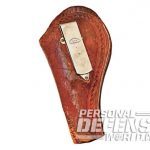 “Well, I’ll be!” shouted the gravelly throated card player. “Another full house. Must be my lucky night.” Across the table, a well-dressed gentleman stared over the pile of money and into the eyes of a card cheat. Heated words were exchanged and the two stood quickly, sending their chairs grating across the saloon floor. The room fell silent as the two stepped back from the table. It was at that moment that the swindler realized the dude he’d fleeced wasn’t even wearing a gun!

“No gun belt? What a fool,” he thought, drawing a foot-long knife from his hip. But before he could even take a step he was staring at a pair of short-barreled six shooters that had appeared out from under the man’s jacket!

This cautionary tale might surprise a lot of people, but concealment pocket holsters, inside-the-waistband (IWB) and spring-clip pant holsters actually date back to the mid-1870s. The same is true of large-caliber snub-nose revolvers, the most prominent of which first appeared toward the end of the Civil War in the .44-caliber Colt 1860 Army models, which had barrels cut down to as little as 2 inches. This practice continued well into the 1870s with cut-down cartridge conversions and even Colt Single Actions. In fact, Colt built its first Sheriff’s Model with a 2.5-inch barrel in 1882, and eventually every American gunmaker began producing short-barreled revolvers. But the so-called “belly gun” is actually much older, dating back to Samuel Colt’s first percussion model, the famous Baby Paterson, introduced in 1836.

Samuel Colt was the originator of the modern backup gun. In the 1830s he began building small-caliber pocket pistols in Paterson, New Jersey. When he established the Colt’s Patent Fire-Arms Mfg. Co. in 1848, among his first and most successful revolvers were small, .31-caliber pocket pistols, the Model 1848 and Model 1849. Colt’s even offered its own belly production gun in 1862 with a limited run of .36-caliber Police models fitted with 2- and 2.5-inch barrels. Along with the 1865 Pocket Model of Navy Caliber, these scaled-down percussion handguns were the foundation for Colt’s post-Civil War pocket model cartridge conversions in either .38-caliber rimfire or centerfire. The guns, which were mainly remanufactured percussion pistols, remained in production from 1872 until the early 1880s, and in use by outlaws, lawmen, gamblers and just everyday folks as a basic personal-defense handgun. These first snub-nosed .38-caliber models were to be the forerunners of the famous Banker’s Special and Colt Detective Specials developed in 1926 and 1927, respectively.

Among the earliest of Colt’s full-sized handguns to be “modified” in the field were .36-caliber 1851 Navy models (many during the Civil War), followed by similarly altered .44-caliber 1860 Army revolvers. There was notable precedent for the advantages of a small backup gun. A cut-down handgun suddenly presented could give a man the opportunity to get the advantage on an armed adversary, if he was quick and true with his aim.

A cut-down .44 Colt was famously carried by Deputy U.S. Marshal Dallas Stoudenmire, who had a Richards-Mason 1860 Army with a barrel cut to 2.62 inches. The gun was always at his side, literally, (actually in his left-hand pocket, butt forward). It was the gun he was carrying on September 18, 1882, when he was murdered by outlaw Jim Manning, who used a similarly modified Colt with a cutaway triggerguard.

When it came to small- and medium-caliber cartridge pistols, Colt’s and Remington also went head to head for sales and diversification in the 1870s, but that was where the armsmakers went their separate ways. Early on, Remington utilized a two-piece conversion cylinder design based on several British patents. The two-piece cylinder was offered for single-action (SA) and double-action (DA) percussion revolvers and also Remington’s small, five-shot New Model Pocket Revolver, which was destined to become one of the most prolific small-caliber cartridge handguns of the late 19th century.

The Remington pocket models had been manufactured as cap-and-ball pistols from 1863 to 1873, thus there was a decade of production before the conversion to .32-caliber rimfire was introduced in 1873. The popular backup pistols were available with 3-, 3.5-, 4 and 4.5-inch barrel lengths, the latter two being quite rare. More than 25,000 were produced, the majority either converted to or manufactured as cartridge-firing models. The guns were available with both cartridge and percussion cylinders, again making the Remington a very versatile model. However, the Colts proved to be more popular.

Close on Colt’s heels was Smith & Wesson, which built the very first American cartridge revolver in 1857. Although an anemic .22-caliber short, followed by a slightly more potent .32 rimfire (the backup gun carried by none other than Wild Bill Hickok), S&W eventually surpassed Colt, creating an entire series of .32- and .38-caliber backup guns favored by lawmen from the late 19th century and well into the mid 20th.

The company’s ever-increasing and diversified line of top-break revolvers were ideally suited for discreet carry, and by 1896 Smith & Wesson began replacing them with new swing-out-cylinder versions. Over the next 100 years, S&W would continue to rival Colt, which ultimately discontinued near-ly all of its DA revolvers before the end of the 20th century. Colt and S&W had nonetheless laid the groundwork, proving there would always be a market for backup guns.

In the 1870s Vicksburg, Mississippi, merchant and arms dealer Louis Hoffman began selling a variety of holsters designed for short-barreled SA revolvers that attached to a pants waist with a metal clip, thereby eliminating the presence of a gunbelt and lending to the appearance that a man was unarmed. An IWB holster was also patented in 1878 by Ira Page and sold as the Pistol Pocket Case designed for the popular .38-caliber Colt pocket pistols. For gentlemen who preferred to carry even more discreetly, a variety of clever pocket-liner holsters were available as far back as the 1870s.

The backup gun has a long history with lawmen and civilians alike, and as everyone in the Old West invariably learned, when your six-shooter is empty and the situation isn’t resolved, there’s nothing quite so fulfilling as a second gun to fill your hand! 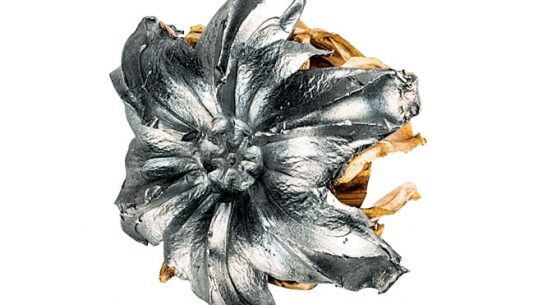