The GP100 Match Champion lives up to its name with several enhancements to win on the range, including a fiber-optic front sight, an adjustable Novak rear sight, a sturdy Hogue wooden grip and a smooth DA/SA trigger.

As concealed-carry holders seek out a means to practice or stay sharp, they are migrating to these events. While competitions should never replace professional and quality training, they are fantastic as a means to put your training and equipment to the test. Just as importantly, they are a ton of fun and a great place to meet other gun owners and like-minded people when it comes to firearms.

Every competition organization has rules. Rules and regulations are necessary to ensure a level playing field and a safe experience for all. Breaking things into divisions generally lessens any significant equipment advantage. For those who want every advantage equipment provides, the Open division is the place. Others limit capacity and pistol enhancements, while still others require your pistol be “box stock.”

One division growing in popularity involves the revolver. The IDPA has several divisions accommodating wheelguns. After all, revolvers are still popular as carry guns. The IDPA is great for those wanting to put their wheelgun to the test. It is also a nice change of pace for many wanting to try something new. While most carry revolvers are fine, it is nice to have a gun designed to enhance the experience. Ruger has just introduced its new GP100 Match Champion, and it may be the perfect revolver for the IDPA’s Enhanced Service Revolver (ESR) division, or similar divisions in the action pistol community.

If you look at the IDPA rule book, you’ll see that the GP100 Match Champion is tailor made for the ESR division. Every enhancement serves to make this revolver more accurate, smoother to shoot and capable of rapid-fire strings. Most are similar to those changes made on my combat revolvers for years, so it remains a workable carry revolver yet should accommodate anyone serious about competing.

Ruger started by re-contouring the standard GP100 .357 Magnum frame. The topstrap and top of the barrel have been dropped a bit, providing better balance and quicker sighting. The 4.2-inch barrel is slab-sided with a grooved top, a contoured underlug and an 11-degree target crown. Novak sights allow for fast aiming and make it perfect for concealed carry. A green fiber-optic front sight is installed above the barrel, and a black Novak LoMount rear sight is dovetailed into the topstrap. Both of these sights can easily be replaced to suit your needs, though they’re very functional and easy to use right ouf of the gates. They help make the GP100 Match Champion so versatile.

The GP100 Match Champion’s internals are machine tumbled to smooth most of the sharp edges, which results in a really nice trigger pull. The double-action (DA) pull is smooth, yet it does not lighten the single-action (SA) pull inappropriately. The chamber mouths and ejector have a slight chamfer that facilitates ejection and faster reloads. The revolver will not, however, accommodate moon clips. The GP100 Match Champion holds six rounds of .357 Mag or .38 Special ammo. The Hogue hardwood grip has a slightly flared bottom, stippling and relief cuts on both sides. It facilitates a nice high grip on the GP100, and its lack of finger grooves means a wider range of shooters can use the gun.

The best part of all this, however, may be the price. Retailing at $929, the Ruger GP100 Match Champion does all of this at hundreds less than most of its competition. 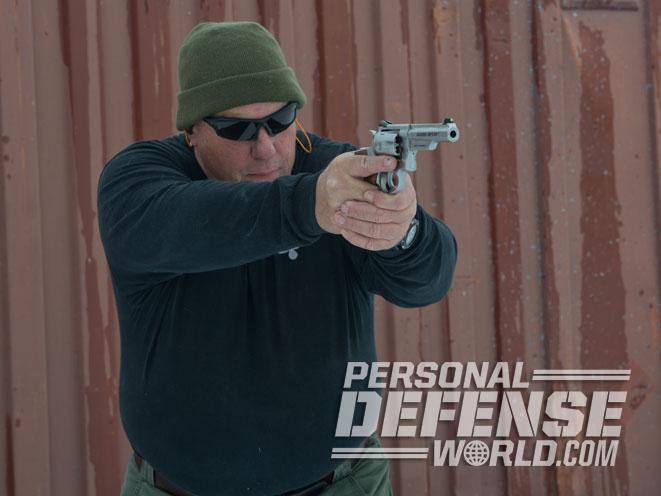 Given this pistol’s name and design purpose, I started by testing the GP100 with some action shooting. Warming up on some steel targets, this revolver points well. I’ve used some very high-dollar revolvers, but none were any faster on target than the GP100 Match Champion. It is really well balanced and comfortable in the hand. Recoil was all but nonexistent using .38 Special loads. Firing some of my old competition loads, as well as some Federal 130-grain FMJs, the revolver was downright pleasant to shoot. Having Novak sights was nice; it meant an easy transition from my typical autopistol for aiming. The fiber-optic front sight comes up quickly and is easy to see. A standard rear notch allows for precision when needed yet remains fast. It is a really nice balance between competition and concealed carry, making for smooth draws from concealment with no sharp edges to hook on clothing.

Reloading was pretty fast using speedloaders. My competition wheelguns all use half-moon clips, so it took some range time to get dialed back in. The chamfering on the chambers is mild, so it takes a bit of focus to get solid reloads, but as the day continued and my skills improved it was pretty fast. There were no issues with the grip hanging up on insertion. For the first hundred rounds or so, rounds dropped right in and ejected easily. Only after quite a bit of shooting did the cases take any effort to eject.

As always, Ruger’s triple-locked cylinder is rock solid, and the release is easy to find and operate. My best El Presidentes were right around nine seconds. That’s not going to win any awards, but it was not bad for getting 12 rounds on three targets with a reload in between. Speedloaders designed for competition would probably shave things a bit, but the GP100 Match Champion is as smooth as it gets outside of a dedicated Open division gun.

Ruger has done a nice job on this trigger. The DA trigger pull is smooth and not overly stout. Measuring 10 pounds in DA and about 4.5 pounds in SA, it is just about right. It was smooth enough that there was no real need for SA other than for real precision. Multiple shots were fast, and the trigger was very predictable. Shooting doubles on steel was fast; moving between targets was smooth. While not as light as some of my custom pistols, the GP100 Match Champion is an excellent mix of competition-legal and everyday carry features. Honestly, the GP100 Match Champion trigger was better out of the box than a few of my old custom-tuned revolvers. Ruger did a great job here. Temperatures during testing were in the teens and snowing, yet it was tough to put this revolver down because it was so much fun to shoot. 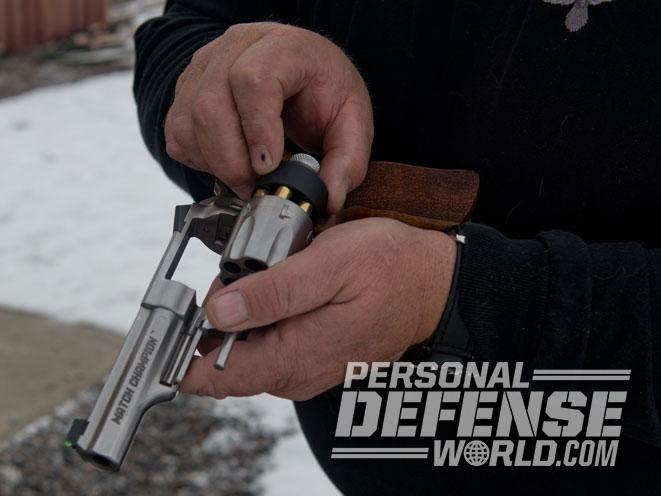 Accuracy was excellent with both .38 Special and .357 Mag loads. Testing was completed at 25 yards using a solid bag as a rest. All shots were fired in SA. Since this is a match pistol, most of my test ammunition was .38 Special or .38 Special +P, with only a couple of magnum loads. Modern .38 Special +P ammunition is excellent and far easier to control in a concealed-carry environment. Much of the recent science indicates shot placement is the single most critical aspect of effectiveness with pistol rounds, making .357 Magnum rounds problematic for most, especially after the first shot. My carry revolvers see either .44 Special or .38 Special +P these days, and I certainly do not feel under-gunned.

In terms of groups, Hornady’s 158-grain XTP took the day with a cluster measuring 1.35 inches center to center. This load was very easy to control on some doubles on multiple targets. Hornady’s XTP bullet is a proven performer, and this load is well suited for concealed carry. Hornady’s 110-grain +P was also accurate with just a bit more recoil. Federal’s 129-grain +P Hydra-Shok also ran well in the GP100 Match Champion, with solid accuracy and good control from shot to shot.

Moving to the .357 Mag, the best I could do was in the 2-inch range, although my guess is that the revolver is far more accurate than me. Federal’s 158-grain Personal Defense Revolver ammo was stout but proved to be the most accurate. Although one of my preferred carry pistols remains a 10mm, magnum loads are a rarity as my age increases and my range time decreases. Any pistol I carry generally sees a regular diet of the carry load, and shooting magnum loads is just not pleasant anymore. With the .357’s real-word advantage waning as modern pistol ammunition improves, I find most of my time is spent with standard ammunition. 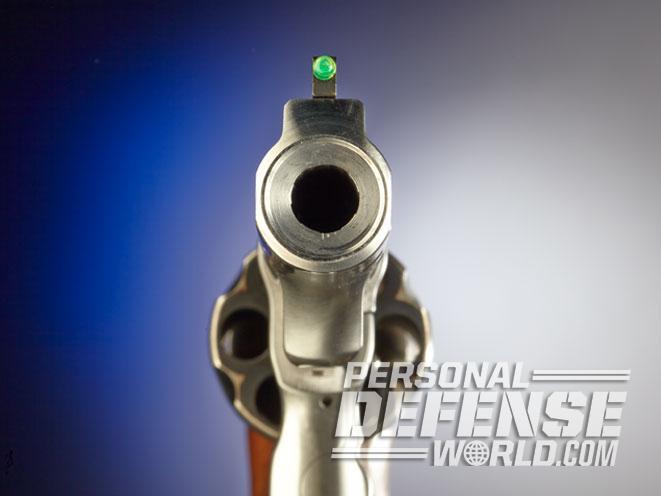 It was nice to spend some quality time with a revolver. My police career started with a wheelgun, so it is anything but new. Revolvers are fun, and spending some training time with this gun at Gunsite’s revolver class would have been perfect. The GP100 Match Champion is smooth to draw, fast to aim and easy to control. Whether you shoot IDPA or not, this pistol is an excellent revolver for concealed carry or just plain range fun. It strikes a really nice balance between competition enhancements and usable features.

It seems to fit in most GP100 holsters, especially leather versions. None were available locally, but there are several on the Internet. My well-worn K-Frame leather holster did okay but would not be my first choice. My guess is Kydex will become quickly available for this gun.

This was a fun test, and the Ruger GP100 Match Champion is an excellent revolver. Well suited to carry, it also fits perfectly into the IDPA’s ESR division if so desired. As usual, Ruger accomplishes all this at a reasonable price. Retailing at $929, it is almost a steal for a competition revolver. It should bring more people into the division, and that is always a good thing. Whether you are a dyed-in-the-wool revolver shooter or just looking for something new, make sure you take a look at the Ruger GP100 Match Champion. You will not be disappointed.