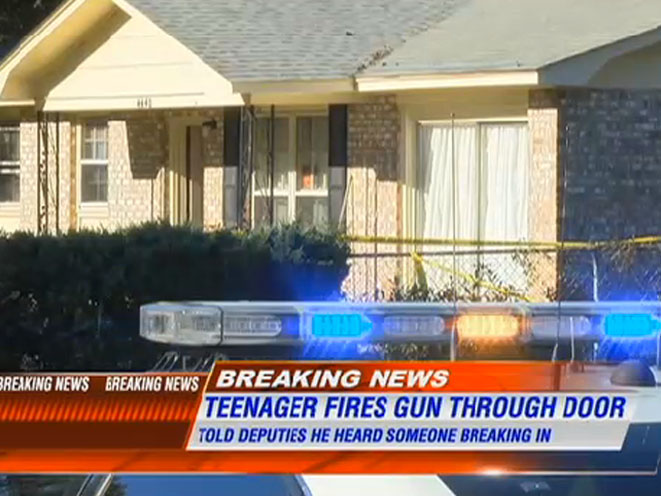 An attempted home invasion in South Carolina ended with one dead suspect and another in handcuffs after a 13-year-old boy opened fire at the residence Tuesday afternoon.

According to WCSC, the incident occurred at a home on Elderwood Drive in Ladson. The 13-year-old told police he was alone when a vehicle pulled up and one of the two suspects attempted to gain entry to the home.

In fear for his life, the boy grabbed his mother’s gun.

“He saw a subject out back trying to get inside so he fired his mother’s gun through the door and the subject reportedly fired back,” Charleston County Sheriff’s Office officials said.

The two suspects fled the scene, but not before police say the 13-year-old fired off several more rounds as the car drove away.

As WCSC reports, the grey Chevy Sonic vehicle later turned up at Trident Hospital with multiple bullet holes in it. An affidavit states that the passenger — later identified as 31-year-old Lamar Brown — had three gunshot wounds and was in critical condition. He eventually died from his injuries.

The driver of the vehicle — 28-year-old Ira J. Bennett — was arrested and charged with first-degree burglary and possession of a firearm during the commission of a violent crime.

The 13-year-old’s mother said she hasn’t seen any crime since moving into the neighborhood this past May. The entire family is shaken by the incident.

The Charleston County Sheriff’s Office is still investigating this case.

Smith & Wesson's own Randi Rodgers reclaimed the High Lady Title for the third...