"The 5-inch-barreled Walther PPQ M2 in 9mm is not for everyone, but it would serve extremely well for home defense and steel competitions."

To American shooters, the name Walther is synonymous with one iconic character: Bond, James Bond. While in the later films the British super agent downplayed making a point of naming the gun he carried, it has always been a Walther. As time progressed, the old standby single-stack, compact .380 ACP PPK gave way to more modern and higher caliber and capacity Walther pistols.

One of the latest offerings from Walther is the PPQ. This is a polymer-framed, striker-fired handgun available in 9mm or .40 S&W that utilizes double-stack magazines. The original PPQ has a distinct ambidextrous, paddle-style magazine release. This lever system extends along the bottom of the triggerguard from the grip and is very easy to use. But, this is America, and we refuse to accept anything that isn’t what we are used to. As a result, Walther introduced the PPQ M2, which eliminates the paddle magazine release and instead replaces it with an American-approved push-button release. It’s not ambidextrous but it is reversible. Not surprisingly, sales have surged. 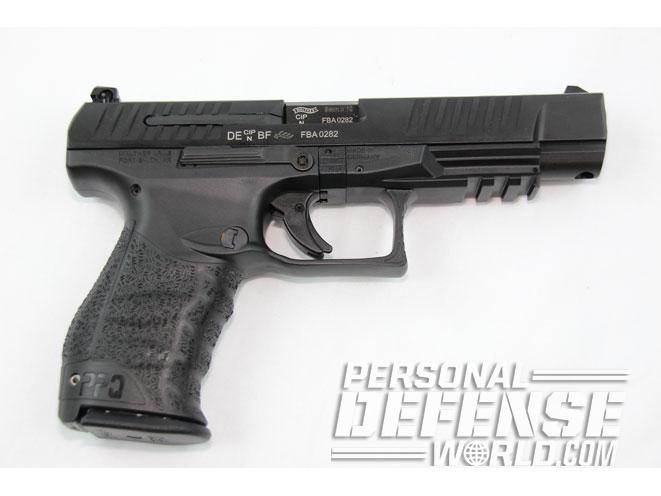 With an eye toward police duty use as well as the growing competition market, the latest iteration of the 9mm PPQ M2 sports a 5-inch barrel and a 15-round magazine, although a slightly extended 17-round magazine is also available. The black polymer frame features an extremely comfortable and well-fitting grip with an aggressively textured design all around that helps keep the gun firmly in hand but does not chafe. The pistol comes standard with three different-sized backstraps to adjust the fit to the shooter’s hand, and one of these also includes a distinct beavertail. There is also a lanyard loop for military or police use.

There is no manual safety, and as such, the exterior controls are reduced to the button magazine release and the 2-inch-long slide release/catch, which is ambidextrous. There are three internal safeties designed to prevent the gun from being fired unless the trigger is depressed, including a firing-pin block drop safety. The polymer trigger face features a release tab similar to other striker-fired pistols, which provides additional safety. The front of the large triggerguard is squared off and serrated, and the front of the frame has a Picatinny accessory rail for easy installation of tactical lights or laser units.

The steel slide and barrel are Tenifer coated. This process, technically called salt-bath ferritic nitrocarburizing, provides a permanent finish that has greater resistance to friction and almost twice the corrosion resistance of stainless steel or chrome. The slide features large serrations at the rear and front for improved control when manually cycling the action as well as an enlarged ejection port for improved extraction and reliability.

The PPQ M2’s low-profile, three-dot sights are adjustable. The rear sight is windage adjustable while the font sight can be adjusted for elevation by removing and replacing it with front sight posts of different heights. The top of the slide is also ridged to prevent any glare from obstructing the sight picture. The PPQ M2 also features a loaded-chamber indicator located on the right side of the slide which appears as a bright red marking visible on the slide itself underneath the rear of the extractor.

The 5-inch barrel on this new PPQ M2 is an inch longer than on the standard PPQ and offers the shooter some distinct advantages. A longer barrel produces higher bullet velocities and thus more energy on target. The slide is also an inch longer, which provides a longer sight picture for improved accuracy. To compensate for the added length, Walther has cut six ports into the top of the slide. These are not there as gas ports but rather to help reduce the pistol’s weight, and they also serve to help cool the barrel. The front of the slide underneath the barrel has been skeletonized as well to help reduce weight, and the recoil spring remains the same length as that on the standard PPQ.

One of the more distinct features of the pistol is its extremely well-designed trigger. As the action completely pre-charges the striker, the trigger has a very smooth and light operation. This is what Walther describes as its “Quick Defense” trigger. It is a two-stage trigger, but on the range it felt almost like a single-stage trigger thanks to its incredibly smooth operation. The trigger travels about 0.4 inches before breaking at a very crisp 5.6 pounds and a super-short 0.1 inches of forward travel to achieve reset. This pistol has no second-strike capability.

The PPQ M2’s disassembly process is also a bit distinct from some other pistols. Simply remove the magazine and ensure that the pistol is unloaded by visually and manually checking the chamber. Next, let the slide go forward and, keeping the pistol pointed in a safe direction, squeeze the trigger to release the striker. Release the trigger and then pull down on the frame tabs located just ahead and above the trigger. The slide and barrel assembly will immediately release and can be pushed the rest of the way forward off the frame. 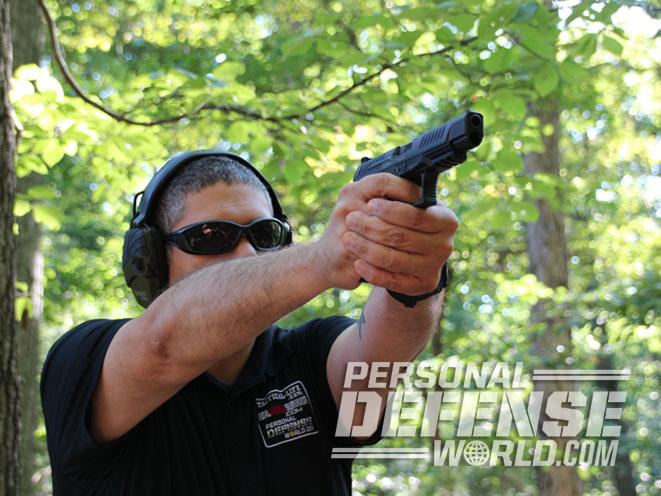 On the range, the Walther PPQ M2 performed phenomenally well. Despite the pistol’s unquestionably large size, it has a surprisingly thin grip that is little over an inch wide. The shape and contour of the grip, as well as the texturing, fits the hand very comfortably. The longer slide and barrel are designed in such a way that the gun weighs the same as the 4-inch-barreled PPQ. The 9mm recoil was negligible, and it was easy to stay on target during rapid-fire drills. Given the weight, recoil and grip design, this is one full-sized pistol that can be easily handled by any shooter. Even the 15-round steel magazines were easy to top off without much effort.

RELATED STORY: The Walther PPS is a Natural for Everyday Carry

In terms of performance, there were absolutely no failures of any sort encountered. The manual states that the PPQ M2 is rated for +P ammunition but warns that repeated use may necessitate more frequent maintenance and specifically warns against using +P+ ammunition. I tested three different brands of premium self-defense ammunition, including one that was +P rated. Thanks to the 5-inch barrel average velocities were above those stated by the ammunition manufacturer. Another interesting finding is that the standard-pressure ammunition actually produced higher velocities than the +P ammunition.

For accuracy, I tested the PPQ M2 from a stable benchrest at 25 yards. This pistol has been set to fire at the 6 o’clock position at that distance. The accuracy results were good, with the average across all groups and types of ammunition measuring less than 2.5 inches.

This inside-the-waistband (IWB) holster is extremely lightweight and comfortable. The backing that goes against the body features a soft neoprene fabric while the portion that rests against the gun is made from ballistic nylon. In between the two panels is a stainless spring-steel core for strength and durability while keeping the holster flexible enough to mold itself comfortably around your hip. The vinyl cover for the pistol offers secure retention and fast access, and it can be replaced so the same backing can be used for multiple guns. Since it is all synthetic material, it is also completely sweat- and waterproof to protect your gun, and the vinyl loops can be adjusted for height and cant. The tuckable design allows you to tuck your shirt in around the holster for maximum concealability as well.

The 5-inch-barreled Walther PPQ M2 in 9mm is not for everyone, but it would serve extremely well for home defense and steel competitions, as the added barrel length significantly improves bullet performance and keeps this pistol extremely controllable.