by Bill Wilson
in Guns, Handguns
0

Bill Wilson, the founder of Wilson Combat, has been a fan of 9mm 1911s for years, as you can tell from his company’s extensive line. Shown is Wilson Combat’s 9mm X-TAC Compact.

Previously there have been several legitimate reasons for the lack of popularity of 1911 pistols chambered in 9x19mm Luger/parabellum, primarily poor functional reliability (mostly due to magazines and a lack of proper extractors), poor accuracy and inadequate terminal performance of 9mm ammunition. Well, that’s all changed now, and there are several reasons I personally see a dramatic revival in popularity of the 9mm 1911 in the future. Let’s look at some of the primary reasons.

One reason is firearm reliability. Several manufacturers of 1911 pistols now know how to build reliable 9mm 1911s. With our local shooting group (we shoot a lot) and the training classes we teach and host, I rarely see a firearm-related function problem with 9mm 1911s, and certainly not as many as we do with .45s shooting factory 230-grain ball ammo.

This is another story, but unlike popular perception, .45 FMJ round-nose ball ammunition is far from being the best choice for reliable functioning in the 1911 platform. My buddies Ken Hackathorn and Larry Vickers do a lot of training these days, and they tell me they observe the same thing.

John Johnston of BallisticRadio.com recently did a 4,000-round test of a Wilson Combat Protector Professional lightweight without a single malfunction. Quality 9mm 1911 pistols just work, simple as that. I know at Wilson Combat we have put a lot of effort into quality components for the 9mm and figuring out how to improve its function and accuracy. There are other 1911 builders that have done the same. 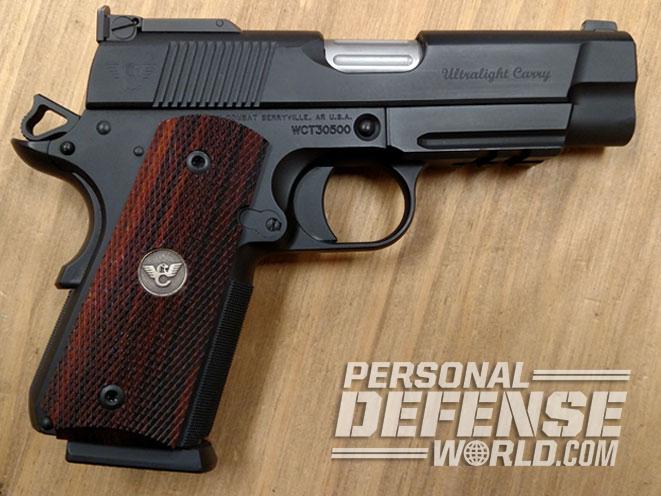 Another factor is magazine design and quality. There are at least five 9mm 1911 magazines on the market now that enhance functional reliability over traditional older designs. The original Colt-style magazines simply are not reliable feeders with anything except FMJ round-nose ammunition. Wilson Combat recently did a major re-design of our 9mm magazines and obviously I feel we have the best one, especially for feeding flat-point and JHP ammunition.

Due to vastly improved bullet designs and propellants, the 9mm can now easily hold its own with .40 S&W and .45 ACP calibers in terms of downrange terminal effectiveness. The FBI and the Texas Department of Public Safety recently announcing that they were switching back to 9mm obviously validates the terminal performance of the caliber. For handloaders, the latest Vihtavuori reloading guide lists 3N37 loads that will push a 115 grain to 1,305 fps, a 124 grain to 1,236 fps and a serious self-defense load with 3N38 that will push a 147 grain to 1,207 fps. Folks, that’s performance previously reserved for the .38 Super.

Other than the .22 LR spectrum, I’m not aware of any caliber that has the wide selection of ammunition types that 9mm does. Seems like today we have a 9mm load for almost any purpose, from cost-effective training ammo to 20-round designer packs of the latest, greatest self-defense loads.

We also need to consider the cost of ammunition. Let’s face it, if you want to be proficient with a handgun, you have to shoot a substantial amount of ammo, and it is expensive these days. At current street prices, you can almost shoot two rounds of 9mm for the cost of one round of .45 ACP. Less cost equals more shooting, which equals more proficiency with your pistol!

The mild recoil and muzzle blast compared to .40 S&W and .45 ACP make the 9mm much easier to shoot, especially for inexperienced shooters. We do a lot of shooting here at the CWC ranch between our local shooting group and the training classes we put on. Without exception, everyone shoots a 9mm better than a .45, often dramatically better, as is the case with students of small stature and/or female shooters. In addition, it’s the ideal caliber for young shooters looking to move up from .22 rimfire to a centerfire caliber.

During training classes, students often shoot 300 to 500 rounds in a day depending on the instructor or the type of class. Staying focused for large round counts so you continue to learn to do something except make empty cases can be tough, especially for newer shooters. I think virtually all firearms instructors will agree with me that students fatigue less and stay focused for larger round counts when shooting the 9mm versus the .45 ACP cartridge.

RELATED STORY: Wilson Combat Gives the Colt 1991A1 a Makeover

While quality .45s typically are inherently very accurate, so are 1911s in 9mm, possibly even more so. Take NRA Action Pistol competition for example. Almost all the top competitors shoot some form of 9mm 1911, and this sport requires superb accuracy to be competitive. It is not uncommon at all to see a quality 9mm 1911 shoot sub-1-inch groups at 25 yards. In addition to the inherent accuracy capability of the pistol/ammunition combination, less recoil and often less muzzle blast equals more accurate shooting.

Finally, with modern self-defense loads, I like 11 rounds of 9mm a lot better than I like nine rounds of .45! From my perspective, more ammo available is always better.

A pistol in 9mm endures much less battering than the same pistol in .40 S&W, .45 ACP or, heaven forbid, 10mm, which results in a substantially longer service life. Instances of parts breakage are also reduced and recoil springs last dramatically longer. While I have no proof of this, I personally believe a 9mm built on a 7075-T6 aluminum frame will last as long as a .45 built on a steel frame. I’m basing this opinion on the lack of wear on my personal aluminum-framed 9mm 1911 and Beretta pistols, and the way Shok-Buff buffers last in 9mm pistols compared to .45s.

In the first issue of sister publication Ballistic, the staff did a survey of 19 well-known firearms experts, myself included, asking what our preferred self-defense caliber was. The results were overwhelmingly in favor of 9mm. Top trainers like B.J. Norris, Bill Rogers, David Bahde, Ernest Langdon, Frank Proctor, Ken Hackathorn, Larry Vickers, Mike Seeklander, Paul Buffoni, Paul Howe, Paul Markel and Super Dave Harrington all have gravitated to 9mm as their preferred caliber. The fact that old die-hard .45 ACP guys like Ken Hackathorn and Larry Vickers have gravitated to the 9mm tells us a lot.

Almost everyone I’ve turned on to 9mm 1911s has had the same reaction, “Wow! This pistol is easy to shoot,” and most of them now own one or more 1911s chambered in 9mm.

Don’t get me wrong, I still like my 1911 in .45 ACP as well as my Colt Pythons and always will, but due to the reasons listed above, I find myself shooting them less and less as time goes by. For me at least, a 9mm 1911 or a Beretta 92 in 9mm will pretty much do anything I need a self-defense or range handgun to do, and these days either a 1911 Ultralight Carry Compact 9mm or a Wilson Combat customized Beretta 92 compact is my daily carry pistol. Which one I carry is dictated by whichever platform I’m shooting the most at any given time. I carry every day, and as I write this, my Ultralight Carry Compact X-TAC 9mm is on my hip in a Lo-Profile II concealment holster.