Cylinder & Slide revamped the author’s Kahr CW40, and the results have made it one of his favorite CCW pistols.

I’ve been carrying my trusty Kahr CW40 around for several years and have never had any cause to doubt its accuracy or reliability. It’s a rhetorical question, but can something that is already good be made better? Indubitably! Enter Cylinder & Slide, or C&S.

C&S President Bill Laughridge started the ball rolling in 1978, and for some 37 years the company has done one-at-a-time custom work on single-action (SA) pistols like the 1911 and Browning Hi-Power; double-action/single-action (DA/SA) pistols from the likes of Beretta, Glock, Kahr, Sig Sauer, Smith & Wesson and Walther; plus DA and SA revolvers from Colt, Ruger, S&W and Taurus. Cylinder & Slide’s work includes action tuning, accuracy and reliability enhancements, custom sights, grips and many other services. Cylinder & Slide also produces its own line of custom parts for the 1911 pistol, the Browning Hi-Power and S&W revolvers. Further, the company sells and installs parts from other custom manufacturers on customer handguns. To top it off, C&S also offers custom pistolsmithing classes and a catalog with many other gun-related products.

My first order of business was to perform a “before” test on my Kahr CW40 pistol. Prior to this project, it had experienced no custom work—just a lot of shooting and use. It oftentimes wears an aftermarket laser sight, and Talon Grips decal-style granulate panels are installed on the sides of the grip frame to aid in rapid-fire shooting. I selected three different brands of cartridges in .40 S&W to use in my shooting tests. I prefer heavier bullets for optimal penetration in short-barrel handguns like the Kahr, which has a 3.6-inch barrel with 1-in-16-inch, right-hand-twist rifling.

At the range, I ran all the test ammunition through my chronograph to see what kind of velocity I’d get with the 3.6-inch barrel on the Kahr. Next, I placed my target stand out at the 15-yard line and, using a sandbag rest, shot three 5-shot groups with each of the .40 test loads. The best official group of the day measured 1.93 inches with the Remington-UMC JHP load; it also had the best average group size at 2.48 inches. I had quite a time with the “4+1 Syndrome” that day and had a nice four-shot cluster at 1.17 inches with the Speer GDHP until shot number five opened it up to 3.38 inches. The same was the case with the DoubleTap ammo, with a four-shot group at 1.89 inches that expanded to 3.71 inches with shot number five. I found that holding my point of aim at 5 o’clock of the black oval placed the shots almost directly in the red center oval. No malfunctions of any kind were recorded.

Next, I put on an open-top, pancake-style belt holster on the strong side, paired with a single magazine pouch on the left side for a practical shooting test. I used a 30-round combat qualification course that starts at 3 yards, then goes to 7 yards and ends at the 15-yard barricade. Shooting was conducted with strong- and support-hand-only shooting, double-taps, a body armor drill as well as standing and kneeling barricade shooting. I used the Remington-UMC .40 cartridges, and when the smoke cleared, using the scoring rings on the B-27 silhouette target, I’d scored 293-12X out of a possible 300. 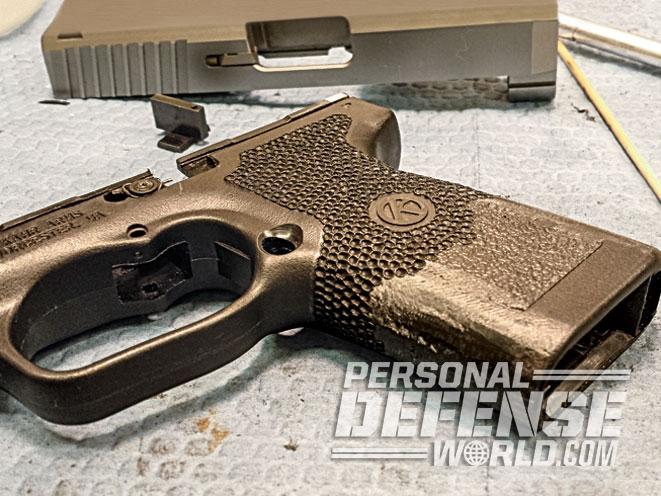 Now it was time to let C&S do its “Kahr Package #1” magic—re-crowning the barrel at 11 degrees to enhance accuracy; throating and polishing the feed ramp and tensioning the extractor for reliability; a trigger action job; modifying the frame to assure mags drop freely; beveling the ejection port for clean ejection; and a sight check and test fire. The pistolsmith also suggested a trigger radius and polishing, a “carry bevel” on the slide stop, modifying the frame for improved magazine drop, and 360-degree stippling on the grip.

I got the CW40 back from C&S about three weeks later. The first thing I noted was the beat-up polymer front sight that had been on the gun was replaced by C&S with a fiber-optic front sight dovetailed into the slide. The company also put the C&S logo on the left side of the slide and “Cylinder & Slide” on the right side of the slide. The grip stippling was very neatly done and was both attractive and highly functional. The magazine release had some frame material around it dished out, which made it seem like the button itself was a bit longer. C&S also replaced the followers on the magazines I’d sent with the gun. Last but not least, the green fiber-optic front sight was enclosed in a metal framework, making it much sturdier than the original front sight, and the green dot worked famously with the white bar below the rear sight notch for an eye-catching sight picture. 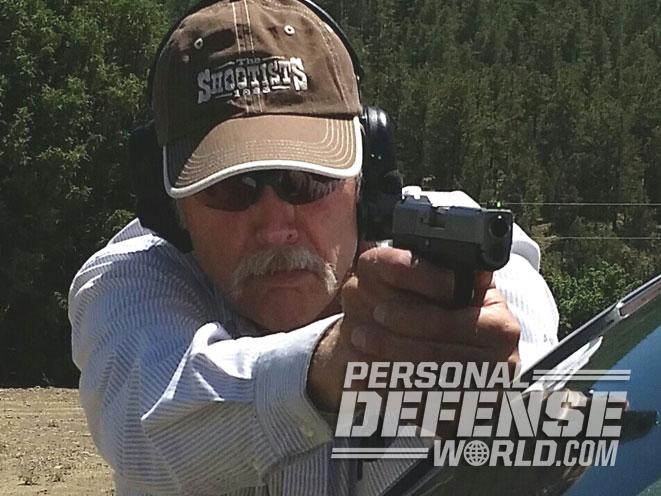 Using the same ammo as before, I again shot three 5-shot groups at 15 yards from the bench. Point of aim/point of impact was very well regulated holding at 6 o’clock of the red aiming circle of the target. This time the best group measured 1.30 inches using the DoubleTap cartridges, and this load provided the best group average at 1.55 inches. The Rem-UMC ammo was very close with a best group of 1.53 inches and the Speer GDHP had a best five-shot cluster of 2.11 inches. The “4+1 Syndrome” was not nearly as pronounced during this follow-up test at the range.

Again, I put on my pancake-type holster, mag pouch and then went back through the 30-round combat course. While my score with the Remington-UMC ammo was slightly better this time at 296-15X out of a possible 300, I found that overall the “pattern” of the shots was much tighter both in the center-mass area and the head of the B-27 silhouette. 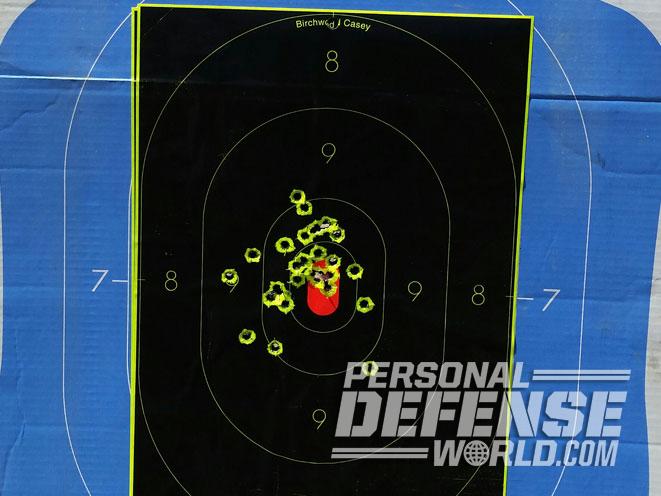 Again, I laud the improved sight picture and trigger action, which felt smoother and lighter, breaking clean with no overtravel, and this time my thumb didn’t hit the slide stop. In fact, the beveled slide stop had no sharp corners to catch the thumb, holster or clothing. Mags dropped free and the rather snappy recoil in rapid fire was easily controlled by the stippled grip.

Since my second round of testing was being done on a range that had some steel targets, I pulled my car around to where I could use it for cover and did some practical shooting exercises at a swinging steel circle at about 10 yards. I fired from the front of the car, from the top near the windshield and from around the rear of the car. Hits were registered on the 8-inch-diameter steel plate with outstanding regularity with all of the test loads. All magazine changes were quickly accomplished, the sights were easily acquired, a firm grip was maintained, and all with zero malfunctions.

I was very satisfied overall with Cylinder & Slide’s custom work on this pistol and the improved performance that I felt the company had provided to my ever-reliable Kahr CW40.