by John Higgs
in Home & Self-Defense, Ladies Only
0

I married a cowboy, basically. Well, a cross between a cowboy, Rambo and Bruce Lee,” Kellene Bishop told me. “I was a city slicker who didn’t even want a firearm in the house.”

She went on to explain how her husband was instrumental in her change in attitude toward firearms and her education in shooting activities that led to her becoming an NRA-certified firearms instructor in all the NRA classes except blackpowder muzzle-loading. But her attitude toward self-defense, particularly for women, includes much more than learning self-defense with a firearm. “When I did some research into rape statistics in the U.S., the results just floored me. We look at other nations’ statistics and we’re horrified, but it’s really horrid here, too.” It infuriated Bishop that in America, rape could be misrepresented in law enforcement statistics and somewhat overlooked in a modern, free society.

With the help of her husband, who holds black belts in three different martial arts, and a 300-pound, 6-foot 4-inch family friend who is also a strategic defense instructor in the U.S. Marine Corps, she developed a physical methodology that can be taught to women of any size and physical condition to increase their chances of escaping from or defeating a rapist.

In the classes, Kellene’s 300-pound friend role-plays the part of a potential rapist. As she taught the techniques to other women, Kellene heard the same concerns again and again from her students. They wanted to be able to defend themselves and their families, but they felt inhibited by the maternal instincts that make women good moms: a nurturing instinct that leads them to relate to an attacker as someone’s son or brother or father. This can lead to a women hesitating to meet violence with overwhelming force in the form of a gun, knife or even a fist.

“We have this mental block,” Kellene said. “Even seasoned [female] law enforcement officers can have a hard time taking someone else’s life.” Kellene teaches women to understand that when a man crosses the line and becomes a would-be rapist, they can no longer be thought of as someone’s son or brother or father, and that women have to give themselves permission to inflict violence on a would-be attacker in their own defense. Without that ability to temporarily let go of their preconditioning to play nice and get along with an aggressive attacker, no amount of physical fight training is going to be of much use in defending against a violent attack.

Kellene teaches the mindset of street smarts rather than a specific fighting style; it’s more a mix of tools and techniques from various sources. Leverage plays a big part in defeating an attacker, and understanding the aerobic factor in a knock-down, drag-out fight is critical. Students are taught that they have to be able to finish the fight before they run out of energy. “The mind is the primary tool,” Kellene told me, “because it impacts everything else, from the willingness to fight to the dedication to practice a technique until they can perform it effectively on demand. The moves and techniques themselves are secondary.”

In order to change some women’s attitude toward the use of force against an attacker, Kellene started teaching her Feminine Fortress classes, which are open to women ages 18 and older, and also girls 12 years and older if their mother participates in the class with them. The classes are definitely hands-on and can include a male instructor simulating a physical assault on students. As graphic and uncomfortable as this may sound, it allows female students to truly examine the various aspects of a sexual assault in the safe, supportive environment of the classroom. As Kellene pointed out to me, “If the students cannot come to terms with this exercise in class, how can they be expected to prevail if it happens to them for real?”

There is a general perception that any form of fighting class requires a certain level of fitness on the part of the students and the instructor, but rapists don’t always attack athletic women. Kellene recognized a need for a realistic fighting method that could be learned and actually used in a potentially deadly encounter by almost any woman, regardless of size, age or stature. She also stresses the importance of the individual being aware of her surroundings so that she has some warning of a situation about to go bad before it happens, and also the danger of being in denial of a situation that is rapidly deteriorating. In other words, sometimes some women will try to reassure themselves that things are okay when they are not. It could be a woman walking home alone late at night who notices she is being followed by a stranger, or it could be a woman who tries to deny her underlying concerns that her relationship with a boyfriend is becoming abusive. 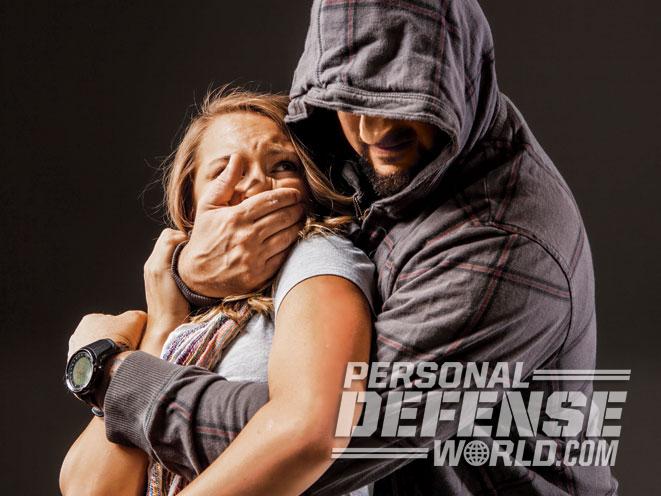 It has been said that the gun is a great equalizer, and that is certainly true for women who want to improve their chances of defeating a violent attacker or a rapist. Laws allowing the concealed carry of a handgun have swept across the United States in the past couple of decades, and now, with Illinois becoming the last state in the Union to pass right-to-carry legislation, it should be much easier for law-abiding people to find appropriate defensive firearms training locally. However, when Kellene looked at the statistics, she was shocked at how few women have used a firearm to prevent an attack. If legislation allows for carrying a defensive firearm and women want to defend themselves, there had to be another reason why the statistics were not showing more use of guns to discourage an assault (i.e., woman draws her gun and potential attacker leaves) or an actual shooting in self-defense.

Further research made Kellene realize that many women prefer to be taught defensive shooting techniques by a female instructor. As an NRA-certified firearms instructor, I have encountered the same view. Some women are nervous about taking a shooting class from a male instructor, but they are even more nervous about being forced to defend themselves without the appropriate skills and tools to help them win the fight. That said, Kellene pointed out that learning how to defeat an attacker does not mean that women have to give up their feminine side. In fact, she encourages her students to retain all their feminine characteristics. Some gun manufacturers seem to share that view and have catered to the growing female market with pistols like Smith & Wesson’s LadySmith lineup and accessories such as handbags with pistol compartments built in.

This isn’t the Middle Ages or some Third World country. It’s America. Fortunately, women can make sensible choices about their own security. For more information, visit http://womenofcaliber.wordpress.com.