Four .44 Magnum Revolvers To Shoot Or Own Before You Die

by Clair Rees
in Guns
0

I’ve tried nearly every type and caliber of handgun over the years, and have accumulated a pretty fair selection. I enjoy my autoloaders, particularly a customized Ruger MkII, and shoot my several 1911s a lot. But of all the handguns I own (and it’s a bunch), .44 Magnums are my favorite.

If I had to make do with only one handgun, it would be a .44 Magnum. I consider my .44s “do-everything” revolvers. With low-recoiling .44 Special loads, they make great plinkers, and they can pull yeoman duty on rabbits and other small game. For home defense, .44 Specials will do the job just fine. My .44s are on the large side for concealed carry, but I have other guns to fill that role. In the field, a sturdy hip holster makes toting a .44 no problem. 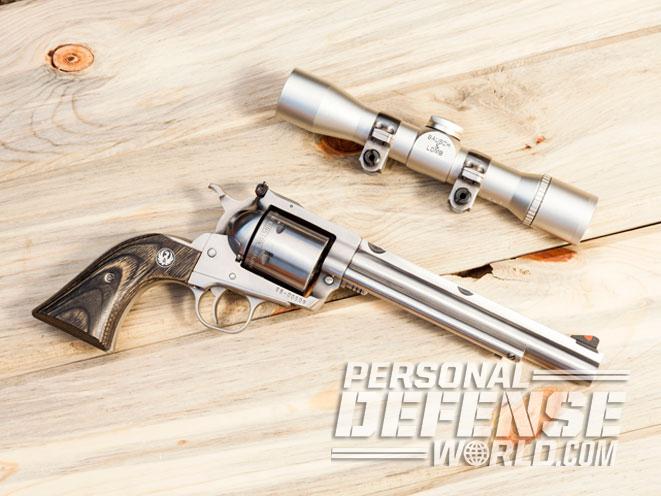 In addition to target practice, my .44s are used for hunting. At one time, I was a “rifle only” kind of guy when deer season rolled around. Then I took a nice desert buck with a Ruger Super Blackhawk I’d recently purchased. I admit to thinking twice before leaving my rifle in camp, but I ambushed the deer at 65 yards—well within range of my handgunning skills. One shot dropped the animal on the spot. From then on I was hooked on .44 Magnum revolvers.

The Super Blackhawk’s cowboy-style plowhandle grips did a great job of easing felt recoil. The grip sort of rolled through your hand. Instead of coming straight back at you, the gun lifted up and back. My 11-year-old son had recently had hand surgery, and I was hesitant to let him fire the gun. He surprised me by loving to shoot the big .44. Recoil proved no problem for him in spite of his injured shooting hand—he used up my supply of .44 Magnum ammo before we headed for home.

Because I wanted to continue using the Ruger .44 for hunting deer, I eventually traded it for a stainless steel Hunter model when this variation came along. In addition to the standard, fully adjustable iron sights, it features a sturdy top rib running the full length of the gun’s 7.5-inch barrel. Scallops in the rib accommodate the Ruger scope rings that came with the gun.

Iron sights are fine at 50 or even 75 yards, but a good long-eye-relief scope significantly ups the ante. Adding a scope sight turned my Ruger into an honest 100-plus-yard hunting gun. In addition to 2x magnification, the scope’s crosshair reticle made aiming surer and more precise. If I’m hunting in heavy cover where short range is the rule, the scope comes off. 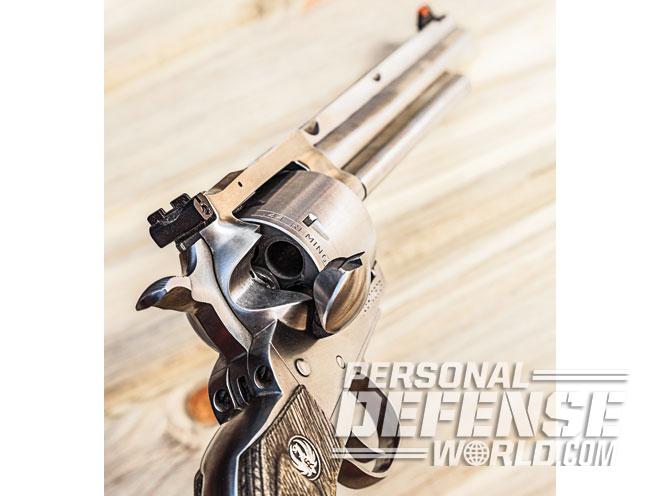 In addition to feeling great in my hand, the Super Blackhawk Hunter is an aesthetically pleasing firearm. The grips are made of attractive grey laminated wood while the cylinder wears “.44 Remington Magnum” engraving. The superb single-stage trigger trips crisply at an even 3 pounds, with no discernable creep or overtravel.

Accuracy with this gun is excellent. With my vintage long-eye-relief Bausch & Lomb 2x28mm scope in place, the Ruger will group a cylinderful of full-power 240-grain .44 Magnum loads into 1.5 inches when the gun is fired from sandbagged rest at 50 yards. I have hunting rifles that won’t do as well. This is one .44 Magnum revolver I’ll never part with.

Unlike some single-action revolvers, the Super Blackhawk Hunter can safely be carried with all six chambers loaded. A transfer-bar safety prevents accidental discharge. Simply opening the loading gate allows the cylinder to revolve for loading. There’s no need to draw the hammer to a half-cock position (which doesn’t exist on this gun).

Ruger’s Super Blackhawk Hunter combines good looks, great handling and the option of mounting a long-eye-relief scope. A more versatile .44 is hard to imagine. This sturdy gun was built to digest full-power .44 Magnum loads. I’ve owned this Ruger many years and have fired a lot of rounds through it. The gun still locks up as tightly as it did when it was new. This is a quality revolver I think every .44 Magnum fan should own. (http://www.ruger.com) 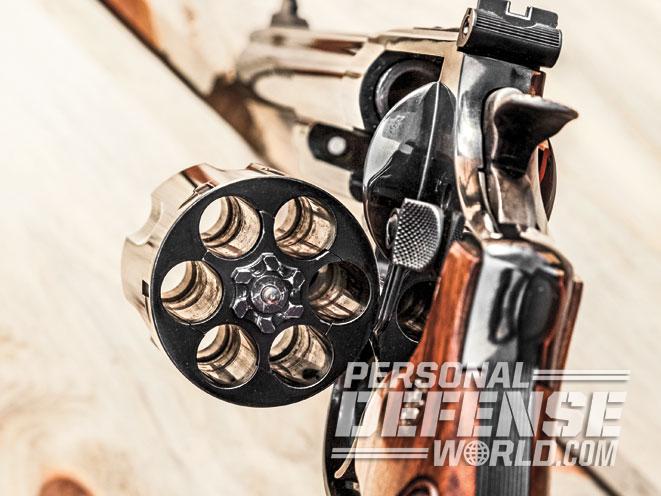 Introduced in 1955, Smith & Wesson’s iconic Model 29 is the gun most responsible for .44 Magnum popularity. When Clint Eastwood referred to his Model 29 in the 1971 Dirty Harry movie, he famously said, “This is a .44 Magnum, the most powerful handgun in the world.” After that movie appeared, dealers had a hard time keeping Model 29s in stock.

This is the gun handgunners clamored to buy. It was the first to trigger interest in the .44 Remington Magnum cartridge. It didn’t hurt that Model 29s were truly gorgeous—highly polished and wearing S&W’s bright blue finish, along with checkered Goncalo Alves grips. These revolvers were truly examples of the gunmaker’s art. 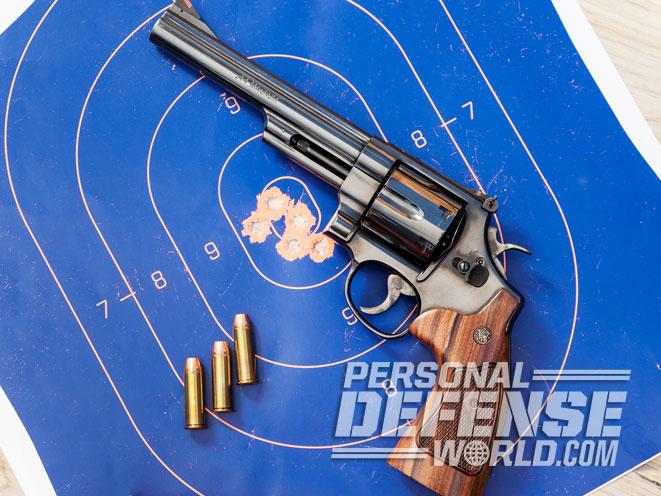 Offered in several variations over the years, Model 29s have always been highly desirable. However, more robust revolvers now available will digest high-pressure magnum loads with greater aplomb. If you want a revolver that will shoot hot handloads or full-power factory fodder day in and day out, the Model 29 may not be your best choice. These guns should be treated as works of art and fed loud and boomer loads sparingly. While stronger .44 Magnums are now available, the Model 29 is an icon every .44 Magnum fan should be happy to own. For many, it remains the .44 Magnum, the gun that started it all.

The Model 29 I’m using now is a truly handsome revolver. One of the “Classics” Smith & Wesson sells today, this gun has a frame-mounted firing pin (early Model 29s had the firing pin mounted on the hammer) and Altamont Service grips in place of the original Goncalo Alves grips. This gun carries an $1,169 MSRP, which is a bargain compared to the prices early collectable Model 29s can go for. (htttp://www.smith-wesson.com; 800-331-0852) 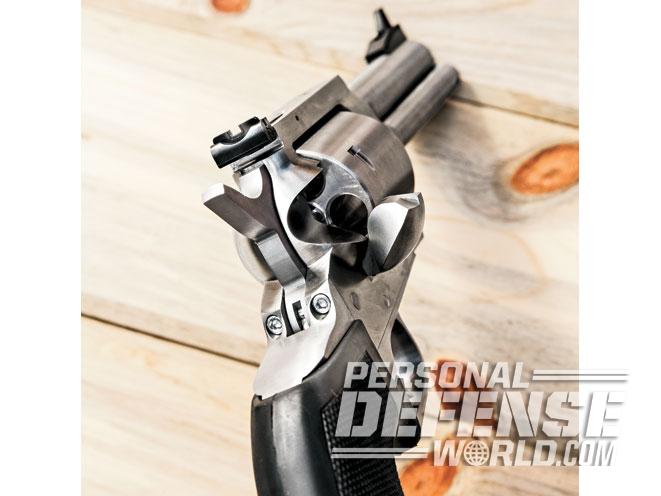 If you’re looking for a revolver that will digest full-house .44 Magnum loads without complaint, the Big Frame Revolver (BFR) from Magnum Research is a top choice. This heavily constructed single-action “five gun” (the beefed-up, fluteless cylinder holds only five rounds, allowing thicker-than-normal chamber walls) is hell for stout.

The single-action revolvers offered by Freedom Arms are similarly robust, but at roughly twice what you’ll pay for the BFR, these guns are out of contention for many buyers. However, if you can afford one, you can’t do better. One of these behemoths chambered for the .475 Linebaugh resides in my gun safe, but the BFR revolver will do everything the Freedom Arms gun can without breaking the budget.

This is a sturdy, handsome gun with oversized rubber grips that ease some of the sting when you fire full-house factory loads or hot handloads. I like the safety factor this heavily built revolver provides. For example, like the Freedom Arms offerings, the BFR is also available in hard-kicking .454 Casull and even .500 S&W chamberings, so it should handle any .44 Magnum fodder you feed it. When firing .44 Magnum loads generating stout recoil, keep a firm grip on the gun to counteract the barrel’s natural tendency to sharply rise and move toward the shooter. Always use a two-handed hold. 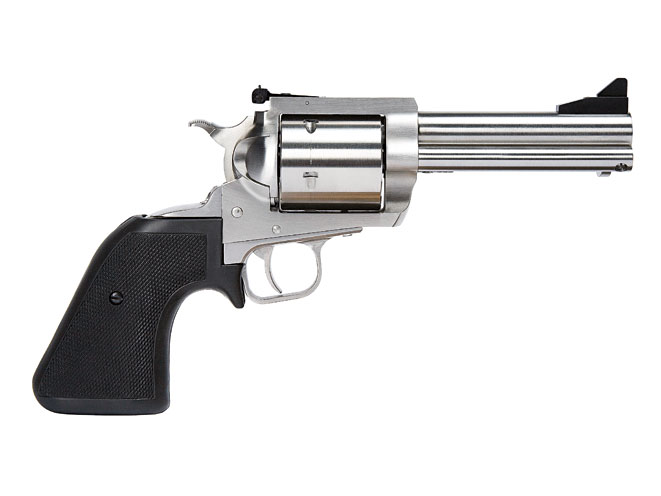 The BFR is a single-action revolver featuring a safety bar that rises to transfer the hammer’s energy to the frame-mounted firing pin whenever the gun is manually cocked. Once all five chambers are loaded, you can make the gun safe to carry by using your thumb to prevent the cocked hammer from falling as you pull the trigger. Then, once the hammer has broken free of its cocked position, releasing the trigger while carefully lowering the hammer also lowers the transfer bar, rendering the gun safe from any sort of accidental discharge.

Be extremely careful to keep your thumb from slipping from the hammer until you release the trigger and the transfer bar moves out of battery.

To load or unload the cylinder, make sure the gun isn’t cocked, then open the loading gate and revolve the cylinder either clockwise or counterclockwise. When the ejector rod is aligned with the chamber, pushing on the rod will clear each chamber. Unlike some single-action revolvers, it’s not necessary to leave one chamber empty. The BFR’s topstrap is drilled and tapped to simplify scope mounting. As an extremely versatile .44 Magnum, this good-looking gun is hard to beat. (http://www.magnumresearch.com; 508-635-4273)

King Of The Mountain 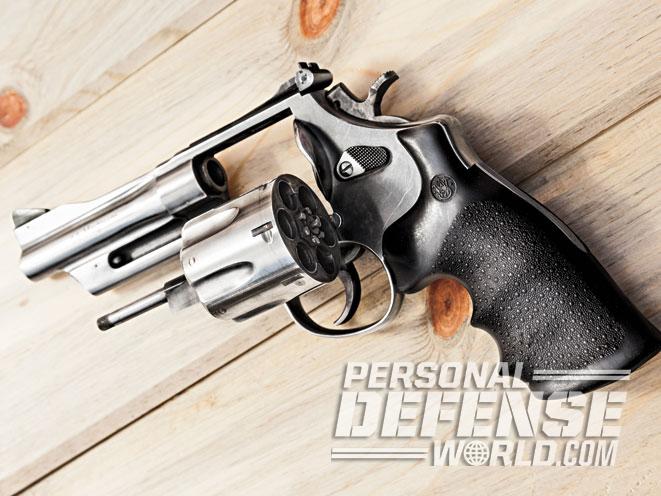 Introduced in 1989, the Smith & Wesson Mountain Gun was a lightweight version of the Model 629/Model 29. Featuring rounded butts and 4-inch, tapered barrels, the first Mountain Guns were a special run of blued steel guns produced for the Smith & Wesson Collectors Association’s 25th anniversary. They sure were lookers!

Weighing just 34 ounces, the Mountain Gun is a real handful when loaded with .44 Magnum factory loads. Not to put too fine a point on it, but its recoil is downright ferocious, particularly with 300-grain Black Hills ammo or the equivalent. If you wanted to step up to serious brown bear medicine, you might be tempted to try Buffalo Bore’s 340-grain, hard-cast loads. I personally haven’t had the nerve to try this scarily powerful load in my Mountain Gun yet, and likely never will. The Mountain Gun isn’t designed to take the punishment this load doles out, and neither am I. Shooting loads generating this much energy would drastically shorten the life of, or even destroy, the lightweight Mountain Gun. 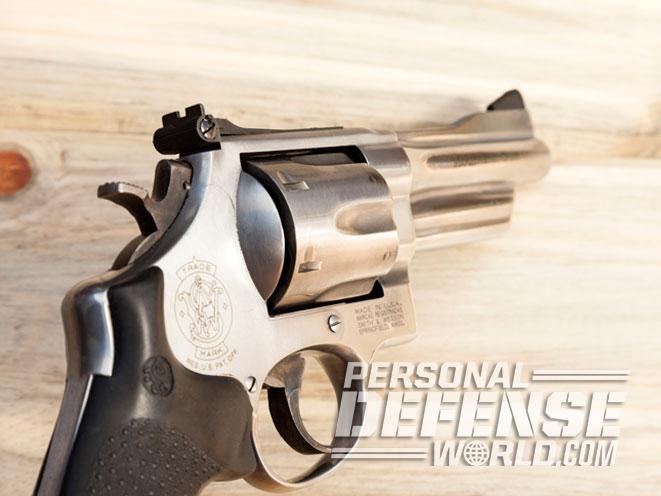 Still, this is the gun I carry in bear country. Its handy size and relatively light weight make it a pleasure to carry in my Bianchi Covert Option belt holster. And .44 Magnum loads offer comforting protection against recalcitrant grizzlies, as long as you can place your shots where they should go.

For plinking or casual trail use, I feed the Mountain Gun .44 Special loads. They make this gun a downright pleasure to shoot. Loaded with .44 Magnum ammo, this lightweight revolver kicks like a deranged mule. I always try to wear padded shooting gloves when firing full-house magnum loads. Because these guns have been out of production the past several years, they can be hard to find (and fetch premium prices), but this is another .44 Magnum I think every serious handgunner should own or shoot. (http://www.smith-wesson.com; 800-331-0852)