As we have long known, a man’s weapon is less important than the man. Up in Littleton, Colorado, recently some creep went on a rampage and started shooting people. Since no firearm was ready to hand, a local construction worker terminated the action cleanly with a rock. The article did not say what caliber the rock was.

In going back over some of the hunting adventures from the English colonial period I discovered the custom of sleeping with a pistol under one’s pillow. This was presumably because field accommodations were pretty fragile and one had no security apart from himself (“So what else is new?”). This raises the interesting question of what sort of pistol is best kept under the pillow. Much, of course, will depend upon the character of the individual in such matters as to how deeply he sleeps and how quickly he awakes. I think a good choice might well be a heavy-caliber Peacemaker. It may not be the most efficient fighting tool around for one who is wide awake, but very little can go wrong with it, and a ready round of snake shot might prove to be just what is needed. 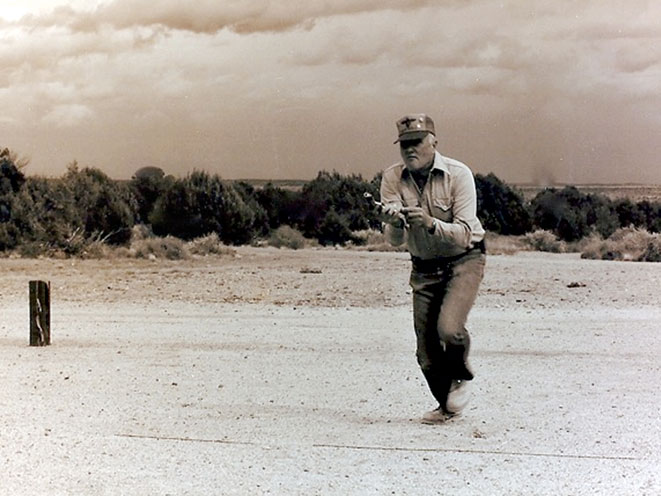 If you are ever fortunate to be in a position where it seems necessary to pack two guns, take care to always to pack the heavy. Let your companion or your assistant pack the light. If an emergency occurs, you do not want to be standing there with the rapier in your hand while the man carrying your battle-ax has suddenly departed.

Many years ago I instituted the doctrine of always placing two shots solidly in the center of the adversary’s torso. This has become the rule throughout much of the world, and while it is not necessarily wrong, it ought not to be followed slavishly. In a gunfight the precise placement of a big bullet is what wins. That second shot is just for insurance. However, in certain competitive circles the need for an almost instantaneous second shot has lead to the introduction of small calibers, long slides and light loads. This is not a good answer and course designers should take note. 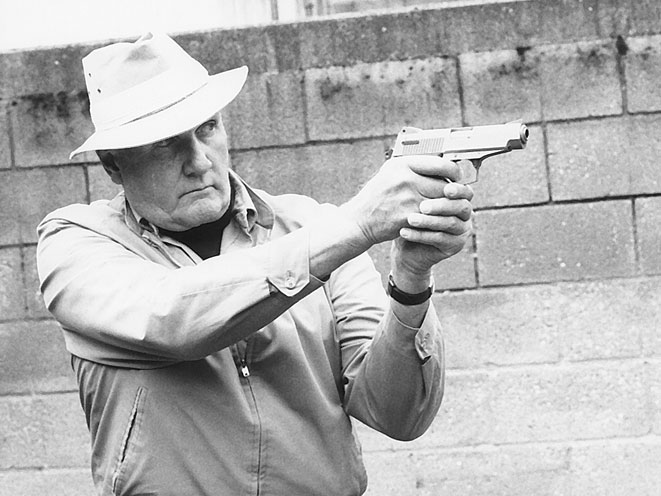 We are somewhat amused by the hysteria manifest in the press at the suggestion by Gordon Liddy that if one is menaced by bad guys (particularly the ninja) one is wise to shoot for the head. That statement has got a whole bunch of journalists and commentators bleeding from the nose. One wonders why it should. Where else should you shoot a man if he is probably wearing an armored vest? If you decide to shoot you have made the big decision. Where you place your shot is merely a technical matter.

Have you noticed all these pictures of people shooting from a putative kneeling position and not using the knee? One would assume that error would be obvious even to a person who had never thought about it, but we are living in an age where people will not do anything because it makes sense and will cross the street against the red light simply because they were never told not to.

“Heroism” is not the same as coping. A man who does his job properly and succeeds through his own efforts is definitely to be commended, but he is not a hero in the classic sense until he deliberately lays his life on the line for a cause he deems to be greater than himself. 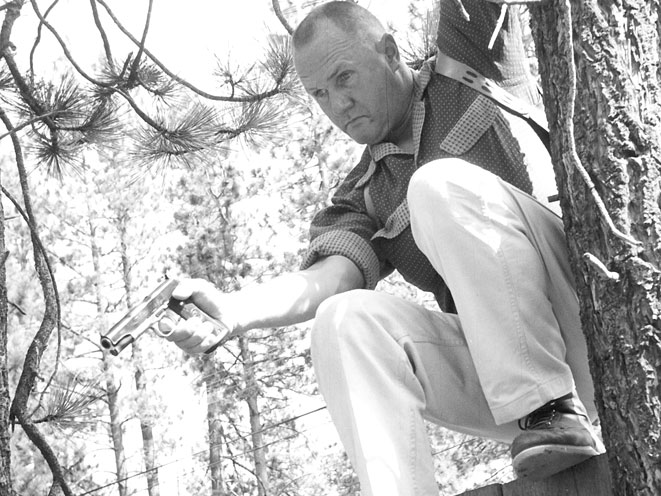 When people tell you that personally owned firearms are a source of deadly danger you may point out that according to the National Safety Council about twice as many people die from medical malpractice as die from firearms accidents. Furthermore, there is no comparison to the risk from motor vehicles, falls, poisoning, drowning and simply choking to death on your food.

Note: The intellectual property of Jeff Cooper is owned by Gunsite Academy and reprinted from Gunsite Gargantuan Gossip with their permission. Cooper’s books are available from the ProShop (928-636-4565; http://www.gunsitestore.com) and http://www.jeffcooperbooks.com