by Robert A. Sadowski
in Guns, Shotguns
0

Savage Arms offers several Stevens 320 shotguns with various furniture and sighting options, but they all are affordable, durable and perfect for home-defense duty.

The pump shotgun is a mainstay of law enforcement arsenals for the simple fact that it is effective in close quarters and at distance. Shotguns can be loaded for whatever scenario an officer encounters: less-lethal ammo to chase a bear out of a resident’s yard, buckshot for a close encounter with multiple threats, or slugs at distant targets. The Stevens 320 Pump is the type of weapon you want in a fight.

Stevens is a brand name used by Savage for a line of shotguns it imports from by Sun City Machinery Co. in China. Stevens Arms was founded in the U.S. in 1864 and purchased by Savage in the 1920s. Since then, Stevens has come to mean a quality shotgun at an affordable price. Over/under shotguns and bolt-action rifles are also sold under the Stevens brand name.

The 320 line offers a variety of pump-action, 12-gauge models (11 in total) that range from a combo field/security model with two barrels—one for bird hunting and one for home defense—to models solely designed for defense and tactical work. All of the security-only models are equipped with 18.5-inch barrels. Some models sport a plain brass bead, while others feature adjustable rifle sights. Various polymer stock configurations are offered.

The 320 Pump model with ghost-ring sights and a polymer pistol-grip stock should be of most interest to home defender types. Chambered for 2¾- and 3-inch shells, it is a bottom load/ right eject pump. The receiver is a metal alloy with a metal lift gate and a stainless bolt. The bolt locks up tight into the barrel extension, thanks to four rotary lugs. The trigger assembly is housed in a polymer triggerguard with the safety located in the forward part of the triggerguard. Press the safety button from left to right to engage the safety; press it back to show a red ring that indicates the weapon is ready to fire. The only other control on this simple pump gun is the slide lock, located on the left side of the triggerguard, just behind the trigger. If the weapon is not fired, then the slide lock needs to be pressed to rack the action. The trigger assembly and receiver look very similar to a Winchester Model 1200 or 1300, so those acquainted with those Winchester models will find this Stevens familiar.

The top of the receiver is mounted with the rear sight, a ghost-ring setup that adjusts for windage and elevation. The screws turn with a distinct click that is both felt and heard. The actual ring is protected on either side by steel wings in case the weapon is dropped on its top side. The front sight is a blade with a green fiber-optic tube. In daylight, the green tube sucks up light, but not in dim and dark conditions. The blade also has protective wings on either side.

The magazine tube comes with a plug installed, limiting the magazine capacity to three rounds. The magazine locking nut can be unscrewed with your fingers to remove the barrel for maintenance. A front sling stud is located at the end of the locking nut and the rear sling attachment is a slot in the stock.

The forend on the Stevens is extended, and that is helpful for small-statured users who may have short arm lengths. The forend allows the user to grasp the forend at the rear-most portion without the chance of pinching their hand between the end of the forend and the front of the receiver as the action is pumped. Deep grooves are molded into the forend for a sure grip with and without gloves. Grooves are also molded into the pistol grip, which flares out toward the bottom. A lip on the bottom of the pistol grip does not allow the shooter’s hand to slip from it. The grip is thicker than a mil-spec pistol grip on an AR rifle. The pistol grip and buttstock are one piece. A solid rubber buttpad is screwed to the stock’s butt.

At 38.25 inches, the Stevens 320 is very maneuverable. Weight is close to 7 pounds, which helps tame some of the recoil. The trigger pull averaged 6.25 pounds. There was slight slack before the trigger broke relatively clean. The reset length was short and, all in all, the trigger is serviceable.

Disassembly is simple and straightforward. First, unscrew and remove the magazine locking nut, then pull the barrel forward and out of the receiver and off the magazine tube, then remove the slide arm forward and off the magazine tube, and pull the bolt assembly out of the front of the receiver. To access the innards, use a nylon punch to tap out the triggerguard pin located above the trigger. The fit and finish was done very well with the Stevens looking very nondescript and business-like. 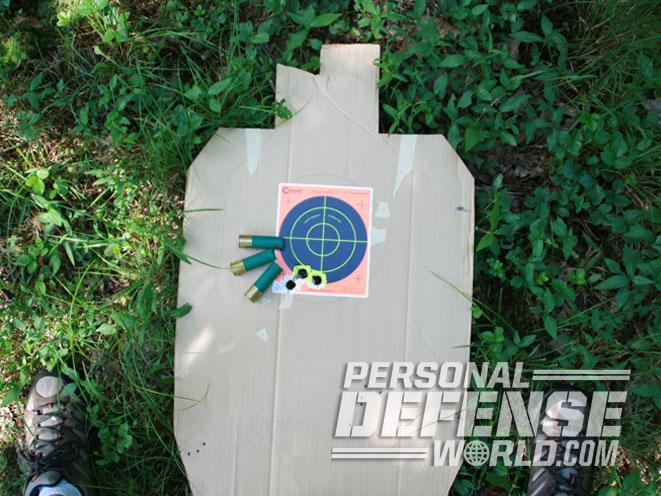 For further evaluation at the range, I used four brands of ammunition, including two buckshot loads and two slug loads. Buckshot consisted of Federal’s Personal Defense 00 and Rio’s Royal Buck 00. For slugs, I used Winchester Super-Xs and Remington Sluggers.

Loading the Stevens was easy, as all shells—even a few reloads of birdshot I tried—fed into the magazine tube with ease. Cycling the action was very smooth, surprisingly smooth in fact for such a low-price point. Using the aforementioned reloads, I pounded a cardboard tombstone target at 25 yards. I wasn’t looking for shot-pattern density, but how the action cycled. It was a smooth operator.

In shouldering the Stevens, the ghost ring was visible right in my line of sight. Rio and Federal buckshot had their turn in the 320, and the Federal ammo proved to be precise. At 25 yards, the Federal ammo on average gave a pattern that was slightly over 7 inches across. The Rio ammo was nearly double the spread, but all pellets usually were on paper.

Shooting slugs is the interesting part as it gives a good impression of recoil and natural accuracy. The Stevens was pleasant to shoot 1-ounce slugs, and it absolutely preferred the old-school Remington Rifled Slugs. It grouped the Remington slugs on average at 1.75 inches at 25 yards. The Winchester loads gave slightly larger groups.

Budget constraints are always a concern and with the Stevens there is no need for compromise. It is a functional, smooth pump shotgun offered at a dirt-cheap price.