The Kimber Solo Carry has established itself as a hard-hitting 9mm pistol with a standard 6+1 capacity, while the extended 8+1 capacity magazine increases the length of the grip by a full inch for a more secure grasp. Building a micro 9mm pistol suitable for pocket carry or very discreet holster wear usually demands cutting some corners, but in Kimber’s case, not in quality but literally the hard edges of the frame and slide.

Since its introduction in 2011, the Solo Carry has not been surpassed for compactness or ease of carry by any other 9mm semi-auto. Its size literally defines the 9mm pocket pistol category—a mere 5.5 inches in length, 3.9 inches in height, 1.14 inches in width and an unloaded weight of 17 ounces. It is, in fact, within fractions of an inch, the size of many .380 ACPs, including Kimber’s own Micro Raptor. Still, when you pick up the Solo Carry, it is not too small—nor have the safety, magazine release or slide release been reduced in size to the point of being awkward. In fact, the ambidextrous thumb safety is remarkably easy to operate. The unusual V-shape of the safety levers makes it easy to activate with the side of the thumb on the draw, and just as easily reset. The V-form actually reduces the effort required to work the safety while still being quite small and having a positive detent when set or released. The angle and rounded corners of the safety also make it less likely to catch on clothing, particularly when drawing or reholstering.

The Solo Carry is built to handle ammunition in the 124- to 147-grain range, which is pretty much what you want for defensive use. I recently got my hands on the Solo Crimson Carry, which features distinctive diamond-pattern, rosewood Crimson Trace Lasergrips, taking this gun’s accuracy up another notch out to about 7 yards in moderate daylight and easily out to 20 yards in low-light or nighttime situations.

The details of this Solo Crimson Carry are exceptional, from the scalloped ejection port to the lower edges of the slide—which curve inward ahead of the frame, creating soft, visually appealing contours that add a small advantage when reholstering—to the triggerguard’s broad, rounded shape. Another noteworthy feature of the Solo Crimson Carry is the trigger. When the slide is cycled and a round is chambered, the striker is pre-tensioned to between 88 and 90 percent of its resistance, thus the remaining trigger pull, which averages 7.6 pounds, requires only 10 to 12 percent of the total trigger pull effort to stage and release the striker. For safety, it is a long trigger pull measuring half an inch with zero overtravel and an almost instantaneous reset for quick follow-up shots.

While a gun like the Solo Crimson Carry is most apt to be used in close-quarter situations of 15 yards or less, the gun is designed to deliver exceptional accuracy at 25 yards, despite its short 2.7-inch barrel. Since it’s ruggedly built to handle self-defense ammunition, I tested the Solo Crimson Carry with 115-grain Federal American Eagle FMJs, Sig Sauer’s 124-grain Elite Performance V-Crown JHPs and Hornady’s 135-grain Critical Duty rounds.

Being a short recoil design, one expects the Solo to have quite a kick, but it is actually less than anticipated. However, with its aluminum frame and stainless steel slide, it’s not gentle. Make no mistake, this is a 17-ounce, 5.5-inch-long pistol spewing out high-velocity self-defense ammo from a 2.7-inch barrel. The Federal FMJs clocked the fastest speeds through a ProChrono chronograph at 1,086 fps, with Sig Sauer’s rounds just a step behind at 1,031 fps, and the heavier Hornady rounds clearing the traps at 973 fps. 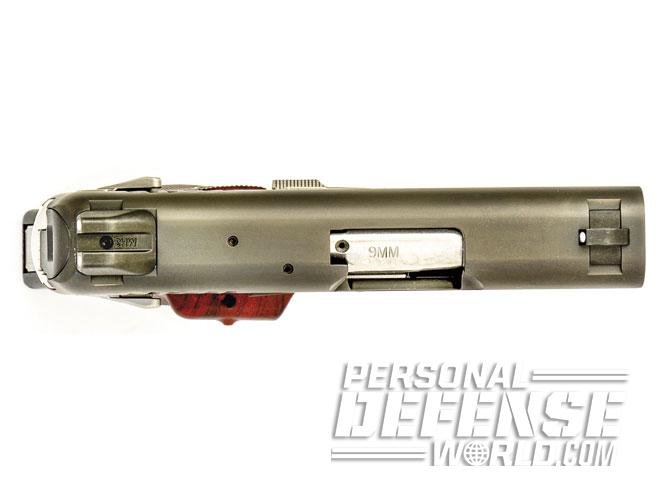 The standard magazine holds six rounds and requires a solid push when being inserted. Pulling the slide back to chamber the first round (or clear the gun) also demands a strong hand due to the Solo’s heavy dual recoil spring and the pre-tensioning of the striker. This is the most physically demanding aspect of handing the gun.

The overall dimensions fit my average hands comfortably with the small finger nested under the magazine floorplate. The magazine and slide release fall easily at hand, operate smoothly (particularly releasing the slide after inserting a fresh magazine), and the ambidextrous safety works seamlessly.

The best five-round group came with the Hornady ammunition, which placed five rounds into 1.75 inches with the best three clustering into 1.25 inches. With the Sig ammunition, the best five-round group measured 2 inches, while the best three measured under an inch. The least accurate was the light-recoiling Federal ammunition, which spread five rounds over 3.2 inches, but that included one flyer hitting low and busting up an otherwise nice 2.25-inch spread for four rounds. 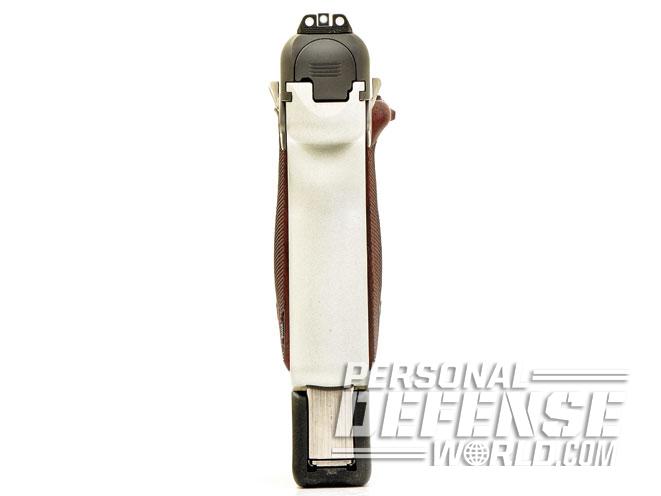 As for the pistol’s accuracy with the Crimson Trace Lasergrips, at dusk I produced a five-round group at 7 yards that measured 0.88 inches! That’s better than I could do with the excellent white-dot sights in broad daylight. There is no doubt that in a tough situation the laser can really make a difference with the Solo Crimson Carry. It is probably the best option possible for this gun.

The Solo remains one of those rare firearms that combines exceptional styling, reliable operation and almost impossible dimensions for it’s chambering. The Solo is not for the weak of wrist or faint of trigger finger—it is a gun ideally suited for the practiced shooter who demands reliability, accuracy and, above all, concealment in the internationally recognized 9mm chambering.

Kimber introduced its first .380 ACP model, the Micro CDP, in late 2012. What was noteworthy about the new semi-auto was that Kimber had never produced a .380 ACP prior to this, being known as a custom builder of .45 ACP 1911-based pistols and, of course, the smallest 9mm ever, the Kimber Solo Carry. Thus, moving down to the .380 ACP was the next logical step in Kimber creating a custom carry sidearm in every popular chambering.

There are two versions of the Micro Raptor, both with lowered and flared ejection ports, distinctive flattop slides, scale-pattern texturing on the frontstrap and slide (replacing traditional vertical serrations), ambidextrous thumb safeties, three-dot tritium night sights and handsome Zebra wood grip panels. The all-black version of the pistol is the lower priced of the two versions. I tested the Micro Raptor Stainless, which features a satin silver slide and frame and Kimber Custom Shop markings.

From the inside out, both Micro Raptors are fine-tuned for superior handling and operation. Coming from the Custom Shop, the parts are meticulously finished and hand-fitted. The 8-pound recoil spring surrounds a steel, full-length guide rod; the 2.75-inch barrel is polished stainless steel; the black anodized hammer is skeletonized; and the match-grade trigger is made from solid aluminum. The aluminum frame has a high undercut triggerguard and a beveled magazine well, the slide is stainless steel and, as a finishing touch, the Kimber Micro Raptors have been treated to minimize catching on clothing or holsters. In short, this is a lengthy list of upgrades that make the Micro Raptor a “best gun” standard in the world of .380 ACPs.

The Micro Raptor Stainless is the epitome of smooth handling. The single-action trigger has a short, consistent pull that averaged 6.88 pounds; the ambidextrous thumb safety operates easily, providing a solid click when disengaged; the slide release requires only moderate pressure to activate; and the checkered magazine release drops empty magazines cleanly when needed. The Kimber thumb safety allows the slide to operate even when engaged, thus you can check the chamber, clear the gun or chamber the first round, all with the safety on.

To evaluate the Micro Raptor Stainless’ performance, I selected Sig Sauer 90-grain Elite Performance V-Crown JHPs, Federal’s hard-hitting 99-grain HSTs and Sig’s 100-grain FMJs. All three brands of ammo clocked faster than most 2.75-inch barrels; Federal’s HSTs flew at an average of 901 fps, the lighter Sig JHPs at 919 fps and the Sig FMJs at 834 fps. Shooting from a distance of 7 yards, the tightest five-round group—produced with Federal ammo—measured just 1 inch with two overlapping and a best three rounds clustering into 0.59 inches. Both of the Sig loads created best groups measuring 1.5 inches.

Overall, it makes no difference what you shoot through the Micro Raptor Stainless at this range. All of the groups measured 1.5 inches or less. It certainly deserves the “best gun” title.