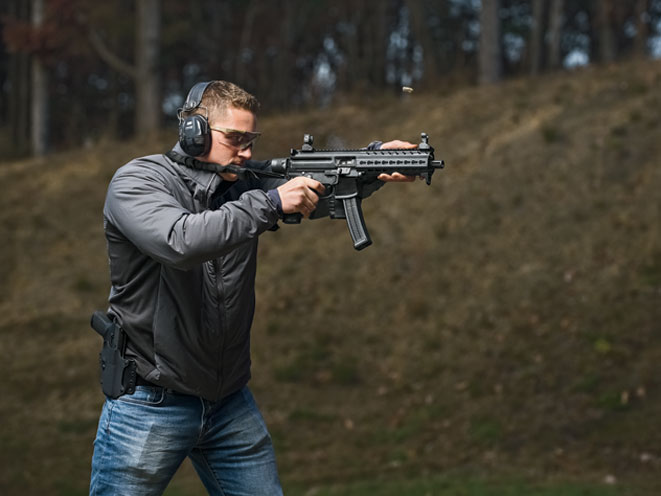 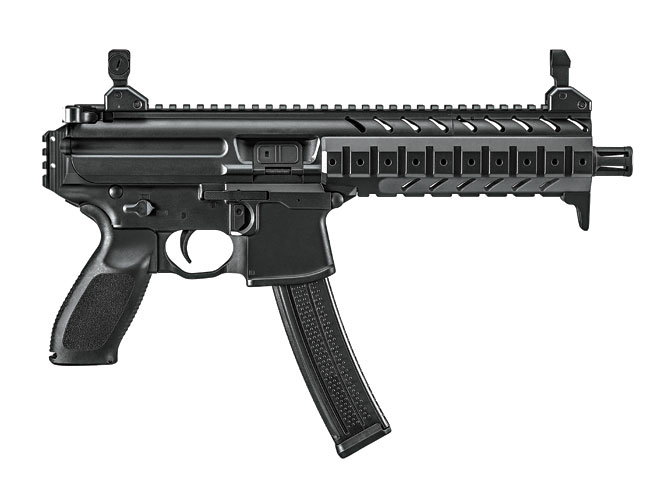 2 of 10
Sig Sauer MPX-P
1.) The Sig MPX-P comes with flip-up front and rear backup sights. 2.) The top Picatinny rail makes it easy to add optics or reflex sights. 3.) The threaded barrel comes with an A2-style flash suppressor. 4.) Note the molded polymer grip. 5.) The standard 30-round mags are translucent. 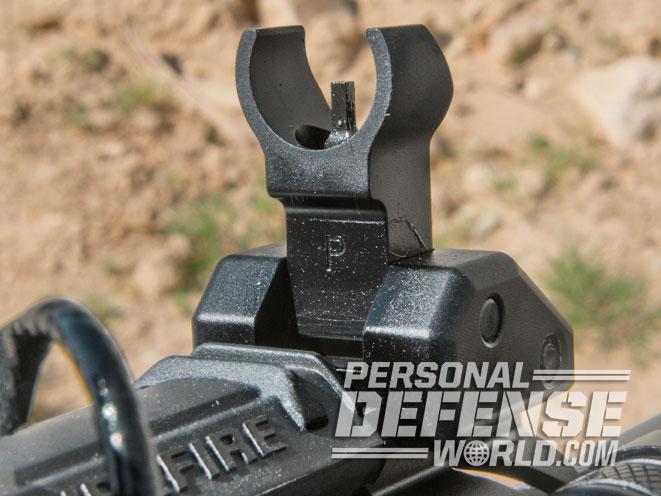 3 of 10
Sig Sauer MPX-P
Fast-targeting backup sights come with the MPX-P, including a flip-up front with semi-circular wings. 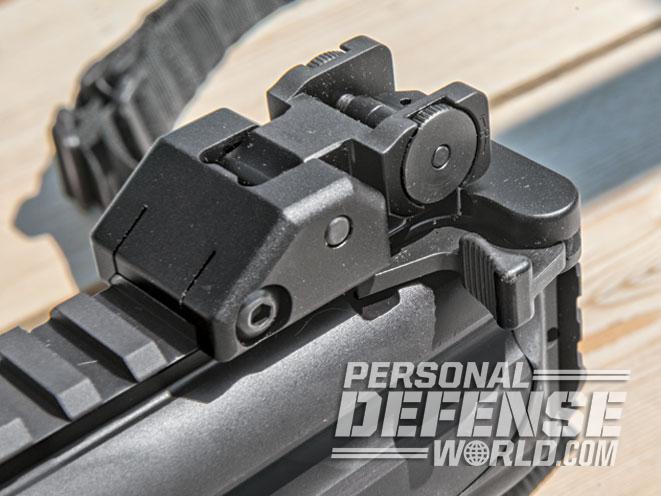 4 of 10
Sig Sauer MPX-P
Fast-targeting backup sights come with the MPX-P, including an adjustable rear. 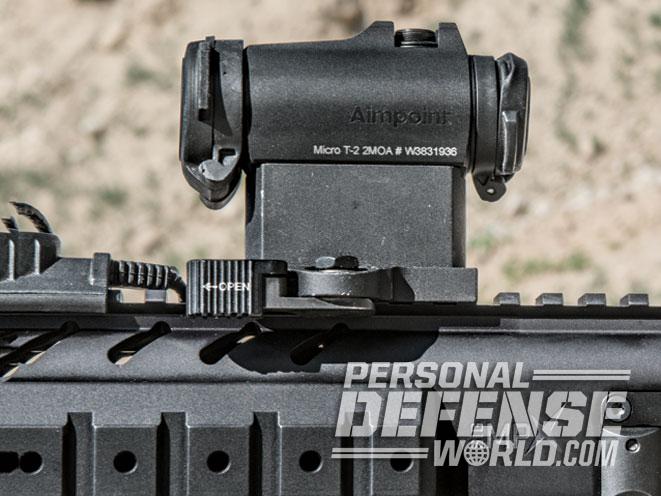 5 of 10
Sig Sauer MPX-P
The Aimpoint Micro T-2 co-witnessed with the backup sights. 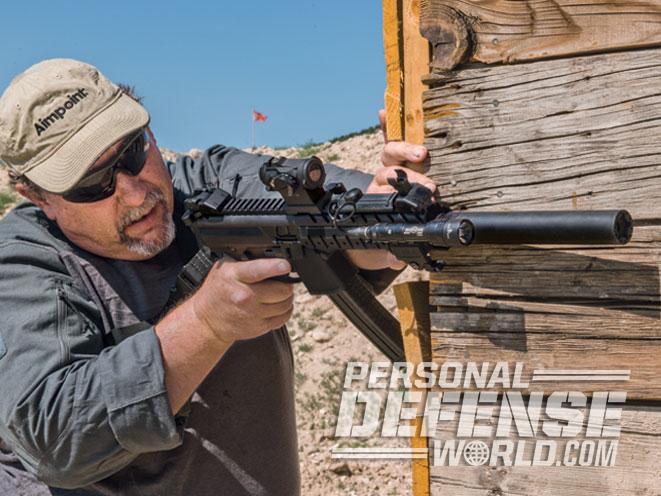 6 of 10
Sig Sauer MPX-P
“Even with the suppressor, it remained plenty short and easy to work around corners and obstacles.” 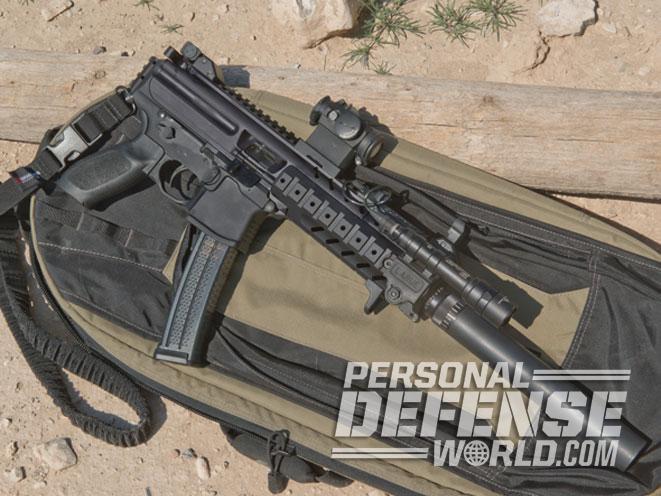 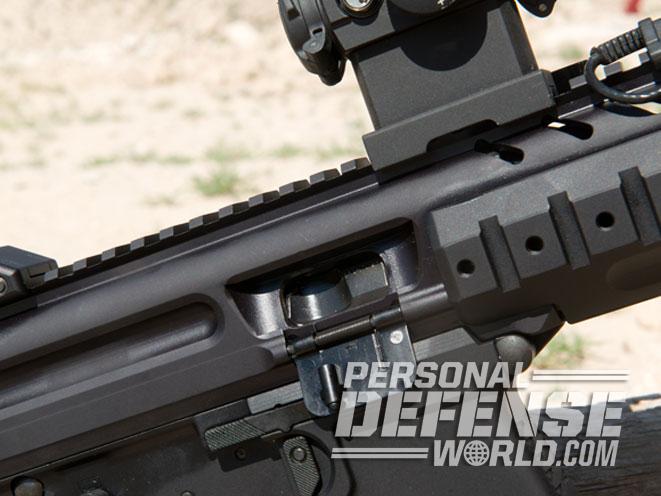 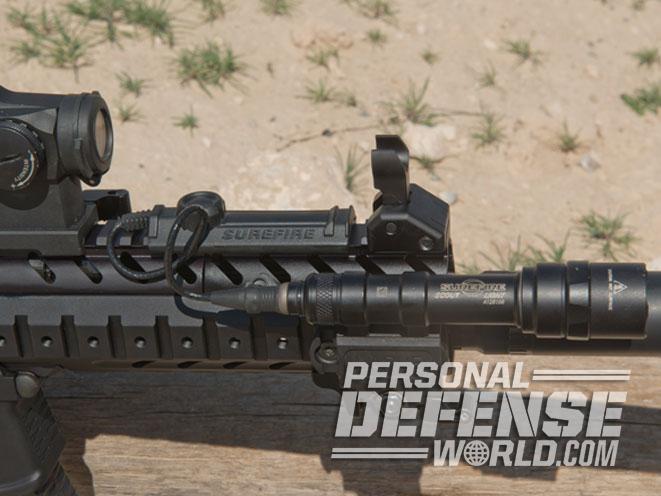 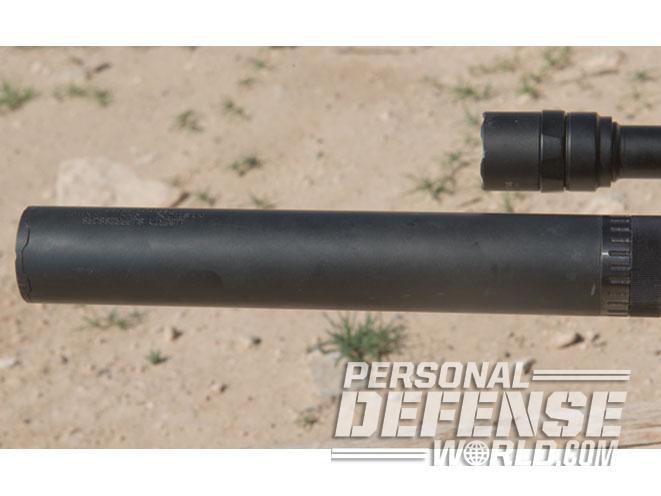 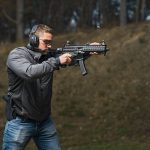 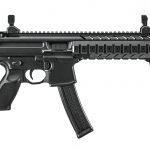 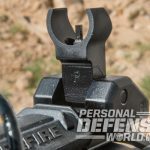 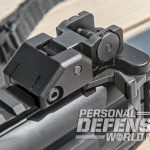 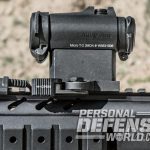 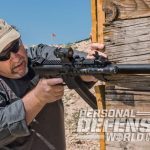 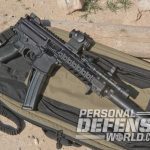 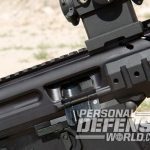 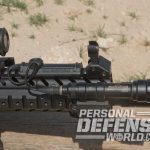 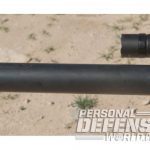 Testing the Sig Sauer MPX submachine gun while at the Sig Sauer Academy a couple years back was a pleasure and pretty impressive overall. There was a ton of innovation in the MPX that made it a true next-generation subgun. With tens of thousands of rounds and hundreds of hours on an MP5, it brought back a ton of memories. Using AR ergonomics and controls, the operating system is weapon specific, using a fully locked, short-stroke pushrod gas system. Being a modular design, it can be configured with several stocks and handguards. Lancer Systems also designed the MPX’s magazine from the ground up, ensuring reliability.

Subguns in 9mm are soft shooting, accurate and can be excellent entry or close-quarters weapons. They suppress well and can be very handy. While the select-fire switch is nice, they are just as effective as semi-auto short-barrel rifles (SBR) and many see them as perfect for home defense in the pistol configuration.

After completing my test of the prototype, I requested the pistol version, the MPX-P, when it was finally made available. The plan was to test it as a pistol first and then register it as an SBR.

Configured with no stock, the Picatinny rail section at the rear the MPX-P is the perfect starting point for our examination. A QD sling swivel at the rear allows you to use it in a similar fashion to a personal-defense weapon (PDW). In a pistol configuration, you can add the Sig SB-15 Stabilizing Brace or similar devices. Register it as a short-barreled rifle (SBR) and you can add either a folding or collapsible stock. All else remains the same. The gun’s safety, magazine and bolt releases are completely ambidextrous. The design even uses an AR-style charging handle.

The aluminum handguard is easily removed by pushing the front take-down pin to one side. Rails lock into place solidly at the 3, 6, and 9 o’clock positions. Three short aluminum rails are supplied along with a forward hand stop. The top rail is continuous and accepts any AR sights, red dots or optics. The gun also features front and rear flip-up sights.

The MPX-P was equipped with an interchangeable, 8-inch, coated barrel that includes the gas block. The barrel is capped with an A2-style flash suppressor and is threaded for 13.5×1 LH suppressor use. The MPX-P’s top-feed magazines are polymer with metal feed lips. One 30-round magazine was included with my test gun, along with an Armageddon Gear single-point sling.

While you can certainly use iron sights on a pistol like this, the addition of a red-dot sight is preferred in my opinion. I added Aimpoint’s newest Micro T-2 with a riser to allow me to co-witness the iron sights. Adjustable for use in any light condition or with night-vision equipment, the T-2 is rugged with a battery life measured in years.

Sig Sauer uses a metric left-hand threading on its pistols and rifles, allowing the company’s suppressors to be used on either. This also makes it unlikely that you will thread the wrong size suppressor on your weapon. Liberty Suppressors offers a ton of adapters for its Mystic X, and I used one for this test. I’ve previously used this suppressor on several weapons, including the Sig Sauer P320C, and have found it to be an excellent suppressor. Built of titanium, it is lightweight with a small diameter, allowing it to fit under many handguards. It mounted up easily and allowed for some “quiet time” on the range.

My preferred method for using pistols like this is slung on the strong side, tight to the body. Having a handguard to grab certainly helps, but shooting accurately while holding the gun out with no support is still a chore. Using the sling, you can push forward against your shoulder, using the hand stop to steady the weapon. It takes some time to set up properly so you get the correct distance, but once you’re dialed in the MPX-P is pretty accurate, even on the move. This method has been used for years by those fielding the MP5 during dignitary protection details, or as a primary weapon as a medic or support team member. After first learning this with iron sights, I found it was made even better with a quality red-dot sight, and the Aimpoint Micro T-2 fit that bill rather nicely.

Starting on the square range at 7 yards, it took some time for me to get dialed back in. After 100 rounds or so, I was getting pretty nice fist-sized groups starting from a ready position. Using the strong-side sling (strong-side arm through the loop), the pistol sits at your side, similar to a holstered position. It not only allows for some concealment where appropriate, but it can be pretty fast. Index the grip by pushing against the sling. Maintaining sling pressure, you drive it up and forward, grabbing the handguard with your off-hand as you index the target. Once the dot is on target, you go to work. With practice, it was possible to get on target in times similar to a solid draw (1.5 seconds). Even when pushing my personal limits, it was possible to stay well centered at 10 yards with groups a bit larger than my fist, which is plenty accurate for real-world applications.

Now it was time to get a move on. Starting on the square range at 20 yards, forward and backward movements were added to the drill. Standard protocols on select-fire with the MP5 was double- and triple-taps, so that was the norm here as well. With practice, the MPX-P was pretty fast and as accurate as it gets when you’re minus a stock. I found it to be like running a similar setup with a rifle. Recoil, especially with the suppressor, was minimal at best. The MPX-P flings brass authoritatively and with solid consistency. Because I only had a single magazine, it was not possible to practice reloads, but it inserted straight in with no rocking needed. It also locks open on the last round, making transitions from an AR pretty easy and reloads about as fast as they get.

Working around the barricades, I found that the handstop worked rather nicely. Rather than use sling pressure, it was locked against the barricade. Just lean into it, get your sight picture and you’ll find that the MPX-P will stay pretty much in place. It’s the same thing when working around the corners of a house. Indoors, the MPX-P was well suited to work from across the room. It really excels in tight spaces, making it a solid choice for home defense. Even with the suppressor, it remained plenty short and easy to work around corners and obstacles. I believe it would also work really well out of vehicles.

Accuracy was pretty solid, although this type of pistol is more difficult for me to dial in when it comes to groups at 25 yards. I shot a few groups while holding the MPX-P like a pistol—single- and two-handed, with no sling—and as one might expect, the barn was pretty safe. After adding the sling, it proved much more accurate. With the sling extended for tension, it was possible to ring the 6-inch steel pretty much at will, with groups on the paper in the 3- to 4-inch range. Moving to the bench with a rest, I found it to be more like a rifle than a pistol. My best group of the day measured just over 1.5 inches, with four of the five shots closer to an inch using Hornady 115-grain XTP ammunition.

Designed with duty in mind, the trigger is rather stiff. It pulled pretty clean and broke between 8 to 9 pounds most of the time. That’s about the same as a true mil-spec AR trigger and a bit better than the MP5 was on semi-auto. Most 9mm ARs deal with trigger pins walking and their recoil cycle is often more punishing. It seems counterintuitive, but it’s true. Sig’s MPX-P trigger uses a “bridge” that mitigates that and ensures it stays put, making it reliable if not stiff. Yes, you can drop in an AR trigger, but Sig Sauer will void the warranty, so it is not a recommended change.

Running this pistol with the suppressor was a ton of fun, and the Liberty Mystic X worked well. It is longer than some, but its titanium construction keeps it very light. For me, this setup is going to stick around, and the suppressor will stay on my MPX-P even when a stock is added and it turns into an SBR. This is a really nice combination of suppressor and weapon.

This MPX-P ran everything it was fed. It was all brass cased, but it ranged from 115-grain FMJ in my catch-all ammo can of 9mm to 147-grain HST from Federal. It never missed a beat, flinging brass several feet forward. Recoil changed with the ammo a bit, but it was never a real issue when it came to control, even with my Winchester 125-grain +P+ ammo.

With the growing popularity of AR pistols in 9mm, this MPX-P system is timely. Given the choice between a 9mm AR pistol and the MPX-P, it is a no-brainer: the MPX would be my choice. It would also be my first choice for an SBR build. Add a stock and you get an incredibly handy SBR for home defense, vehicle carry or even CQB work. An 8-inch barrel gets you all you need from a 9mm and keeps it workable in tight spaces. If you were thinking about an AR-style pistol in 9mm, make sure you take a really close look at the MPX-P. It may just change your mind.

There are plenty of quality options from SIG’s MPX line, like the all-new ultra-compact SIG Copperhead. You won’t be disappointed in the MPX series. 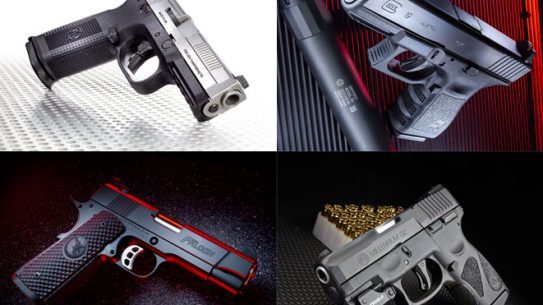 COMBAT HANDGUNS is all about showcasing the latest self-defense pistols to hit the market,...