by Denis Prisbey
in Guns
0

Not even the mighty Google search engine can give us the name of the first guy who successfully attached a scope to a handgun (or when he did it). Along with the man who first tied wood to an iron barrel, the one who invented notch-and-post sights and whoever got the idea to screw rubber pads on the backend of a rifle, his name has been lost in the mists of time. We do know that the first serious use of telescopic rifle sights, which were relatively crude, was during the Civil War. Today, there is very good glass for just about any budget, and while it took a little longer to happen, this has spilled over to handguns as well. Those who like the challenge of hunting with a revolver instead of a rifle have not been left behind.

I can be frankly earnest, or I can be earnestly frank, but I will say that my background favors handguns that can be holstered. However, I recently was looking through Ruger’s catalog, and a big Super Redhawk, a gun I hadn’t paid much attention to before, leaped off the page. The Super Redhawk line was built for scoped use and has its following. I do have one customized 4-incher, but I’ve just never had much interest in using one with glass: like scoping a levergun, the idea has always seemed a bit on the unnatural side. But there it was, a whopping 9.5-inch barrel on a satin stainless 58-ounce .44 Mag artillery piece with the same great, rubber Hogue Tamer Monogrip that worked so well on my 4-incher. I just happened to have several different .44 Mag. commercial loads on hand in the basement bullet mine, and Bushnell had a nice silver-finished long-eye-relief scope to match. Ruger provided the test Super Redhawk; Bushnell, a sample scope. When the early spring weather cleared in my area, off we went to the gravel pit.

With an overall length of 15 inches out of the (long) box, the gun was just that: big. The Super Redhawk uses the same internal design of the Ruger GP100 .357 Mag, obviously scaled up in size. The original Redhawks, and later the Supers, were built to handle the pressure and pounding of the heaviest .44 Mag loads around. They were not adaptations of older designs, which were intended for the relatively low-pressure calibers of the early 1900s. As such, with beefed-up areas of critical contact and high stresses and thick chamber walls, the shiny ’Hawks can run indefinitely without developing the timing and headspacing issues of more antiquated revolver designs.

The Super Redhawk’s massive frame with front extension is an excellent choice if you prefer the convenience of quick reloads in a powerful double-action revolver. It also happens to be the strongest revolver in the entire Ruger lineup. The cylinder can accommodate longer cartridge lengths than the Blackhawks, and the barrel support added by that frame extension is considerable. Ruger’s cylinder-front lockup also adds strength and longevity to the gun, and the long-running transfer bar safety makes it virtually impossible to create an accidental discharge with the hammer fully down on a live chamber.

In factory configuration, Big Red is a six-shooter and features adjustable iron sights. As is, this wouldn’t be a bad setup for hunting: It has a white outline rear and an orange insert on its black front ramp for contrasts against dark fur, in shady forest surroundings and during early-morning or late-dusk lighting conditions. That front sight is also interchangeable: Ruger sells colored replacements if you need something a little more visible, including a fiber-optic front “blade.” The Super Redhawk’s abbreviated grip-frame stub, like the GP100’s, leaves enough latitude for aftermarket grips in materials and sizes to fit the whole family. But I’m absolutely sold on the Hogue Tamers that come standard on this big blaster. Granted, they’re not as pretty as nicely grained wood, but on my own Super, I haven’t found anything more comfortable under the recoil of heavy loads. The Hogue grips are large for some hands, but if they fit and comfort matters, I wouldn’t look any further for grips.

For scope use, the Super Redhawk’s proprietary mounting system is among the strongest of any handgun’s: Milled crescents on the thick topstrap and the frame extension allow the Ruger scope rings to clamp securely in place, with no screws to sheer off under recoil or impact if dropped. These steel rings can’t pull screw threads loose or warp, as aluminum rings and separate bases do, and they’re finished to the same low-glare satin as the gun itself. It’s hard to imagine a stronger combination for a double-action hunting revolver.

The Bushnell Elite 2-6x32mm scope came out in 2011. Offered in either matte black or silver, the optic is designed specifically for heavy-recoiling handguns up to .454 Casull levels. With its light 10-ounce, one-piece, 1-inch alloy tube, this scope doesn’t compromise on strength. The reticle is more or less a conventional Multi-X and relatively compact at 9 inches long, providing a 20-inch eye relief to keep thunder and lightning out of your face on ignition. Bushnell uses argon purging instead of the more common nitrogen. Bushnell advises that argon has larger atoms for longer lasting fog, water and shock protection. With an ultra-wide band coating for superior light and color transmission and Bushnell’s patented RainGuard HD technology to bead water on lenses, it should handle about as much bad lighting and bad weather as the shooter can. I coupled a silver Bushnell Elite with Big Red, which made for a corrosion-resistant handheld hunting machine that’s hard to beat.

Back in the heyday of metallic silhouettes, routinely hitting steel animals at 50 and 100 yards wasn’t all that uncommon with iron sights when in the steady hands of a dedicated long-range handgunner. That wouldn’t be me. And at such distances, I need all the help I can get. I took the Bushnell-equipped Big Red and seven factory loads—lead, polymer tips, hollow points and solids ranging from 225 to 300 grains—to the range on a heavily overcast day, for an initial test session off an Outers Pistol Perch at 50 yards.

At full 6x magnification, the variable Elite scope dialed the target right in. But, as always when zeroing glass, the highest power not only magnifies the image but also any wobble of the gun. You can either try to pull the shot off between heartbeats or dial the scope down to its lowest setting and reduce that wobble as much you can. Of the two alternatives, I find the latter a shade more practical. Firing five-shot strings and staggering the Ruger’s empty chamber on each one, the Bushnell Elite was sighted in well enough on paper that no time was lost on locating the initial point of impact. The adjustment drums used a raised bar (instead of a depressed coin or screwdriver slot) that was easily finger-adjustable—no tools required. With repeatable 0.25-MOA clicks and the quick-focus eyepiece, it didn’t take long to line everything up and start firing.

All that weight out front was a mixed blessing: positive for recoil reduction but, with the raised center of vertical balance caused by the mounted scope, the gun tended to cant. I held as steady as possible with the Bushnell cranked down to 2x, trying to cover the red bullseye with the crosshairs. There was no distinct trend with bullet weight—bullet configuration was probably more of a determinant. (You can typically expect more-than-adequate hunting accuracy in just about any weight from 225 to 300 grains, as long as the gun likes the bullet.) Federal’s Vital-Shok 300-grain CastCore lead hunting load and Hornady’s 240-grain JHP XTP load tied for first place, with five shots at 1.69 inches. Hornady’s polymer-tipped 225-grain LEVERevolution was designed to safely put a more efficient pointed bullet in a lever-action rifle’s magazine tube, but it was quite consistent in the Ruger. Hornady also showed well with its heavy 300-grain JHP XTP. Winchester’s 250-grain Platinum Tip HP was also a good runner, but the Winchester 250-grain Partition Gold JSP and the Speer 240-grain Gold Dot JHP loads both opened up their groups.

On a second, equally overcast day, I hauled a steel buffalo target (roughly 24 inches wide by 20 inches tall) up the hill behind the house, in the back of my UTV. I then set it up against a tall dirt backstop. Backing the UTV away from the buffalo, I loaded the Ruger with Hornady 240-grain JHP XTPs and kneeled on the ground, with my wrists supported by one sidewall of the cargo bed. I shot over the bed, clanging four out of six shots at a full lasered 150 yards. (The first miss was my first ranging shot; the second, just me.) That was enough to tell me what I needed to know. 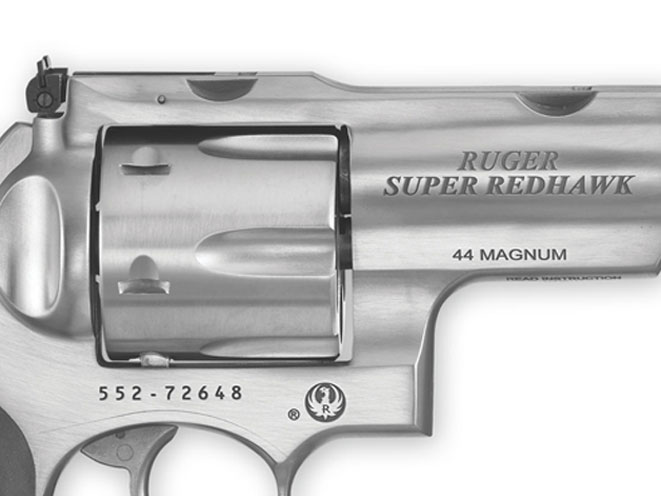 First, if you need long-range accuracy, the Ruger Super Redhawk can pull it off. The DA trigger was smooth and tolerably light. The single-action break was just a fraction over 4 pounds, having some initial minor creep. Unlike the original Redhawk’s design, in which a single spring powers both hammer and trigger return, the GP100/Super Redhawk action enables good gunsmiths to render it even better without losing ignition reliability. (And a nicely tuned Super Redhawk is far from a contradiction in terms.) Find the right load, and learn your trigger. You may be surprised at what you can pull off—literally: The size of my steel buffalo is comparable to the body profile of a good-sized mule deer or hog; that certainly opens up the possibilities for hunting them, as well as elk, up to the caliber’s range limits.

Second, a good scope makes life easier when you’re starting to reach out. Over two cloudy days, the Bushnell was plenty bright and clear for seeing black paper targets at 50 yards and the black painted buffalo at 150, even on the lowest magnification. Not having to fish a quarter out of my pocket to make point of impact corrections was a plus. And the crosshairs are thin enough to still be visible in low-light conditions, without cluttering up the field of view. The 2-6X range can work close brush or more open country, and realistically, much more isn’t needed for .44 Magnum distances. The only issue I encountered with the scope had nothing to do with the scope itself: I had to tighten the rear Ruger mounting screw a couple times during the bench-testing—not a big deal. Just use a good thread locker, or keep an eye on the screws.

Last, expect to find the package a bit heavy, even if you’re a bodybuilder. Freestanding, there’s no way I could hold steady on much of anything beyond 25 yards for very long. For most of us, a rest of some sort (tree, stump, boulder, truck hood, Sasquatch shoulder) will probably be required for longer shots.

I consider Ruger’s Super Redhawk to be the benchmark for anyone looking for power, strength and durability in a big-bore, double-action revolver. And the price tag is not bad for the performance, either. If you’re up to the challenge of heavy-duty handgun hunting, this long-barreled Redhawk will bring home the bacon.