by Andy Massimilian
in Guns, Rifles
0

AAC offers the MPW with various barrel lengths to take advantage of the 300 Blackout’s covert capabilities. Shown with an Aimpoint T-1 and Troy Battle Sights.

The Advanced Armament Corporation (AAC) Multi-Purpose Weapon (MPW) was specifically designed to chamber the extremely versatile 300 Blackout, or 300 BLK, cartridge. The 300 BLK is a relatively new cartridge designed to fit in a standard 5.56mm-sized AR-platform rifle.

When the round was released in 2011, Remington and AAC stressed the advantages of magazine interchangeability without losing capacity. However, the principle advantage of the 300 BLK over the 5.56mm NATO is its wider ballistic envelope. The 115-grain load has ballistics that are close to the standard AK-47 round, allowing the MPW to be used as a medium-range rifle. Or, if the need is to equip troops for extreme close-quarters operations requiring stealth, the .30-caliber 300 BLK can be loaded with much heavier bullets that operate at subsonic velocities.

Using subsonic ammo and a suppressor, the AAC MPW—available in 9- and 12.5-inch-barreled SBR form as well as the standard 16-inch variant—is among the more flexible personal-defense weapons (PDWs). AAC sells both complete rifles or just the upper receiver. The 220-grain 300 BLK load is subsonic but still lethal at relatively close range. At 100 yards, the Remington 220-grain load retains 464 foot-pounds of energy (fpe). Compare that with 323 fpe and 255 fpe for the 230-grain .45 ACP and 124-grain 9mm cartridges, respectively.

The AAC MPW utilizes the direct gas impingement operating system. AAC purposely chose direct impingement instead of an external gas piston design because the latter adds weight and generates a lot of mechanical noise for two reasons. First, the piston and operating rod slam against each other, and second, gas vented under the handguard is louder than vented from the bolt carrier, as with direct impingement systems. Gas piston systems also generate more felt recoil.

Designing a gas-operated rifle that works reliably with widely divergent loads (i.e., 115-grain supersonic and 220-grain subsonic rounds), and with and without a sound suppressor, is not an easy task. It requires considerable experimentation with the gas porting. The task is more challenging when you consider that the rifle does not use a multiple-position gas port that could be opened or closed to match the load. (AAC explained that the Navy did not want an adjustable gas port to avoid operating problems if the port was in the incorrect position when an operator switched from suppressed to unsuppressed fire.) All MPW rifles and uppers are tested with subsonic and supersonic loads in full- and semi-automatic modes and with and without an AAC suppressor before delivery to customers. 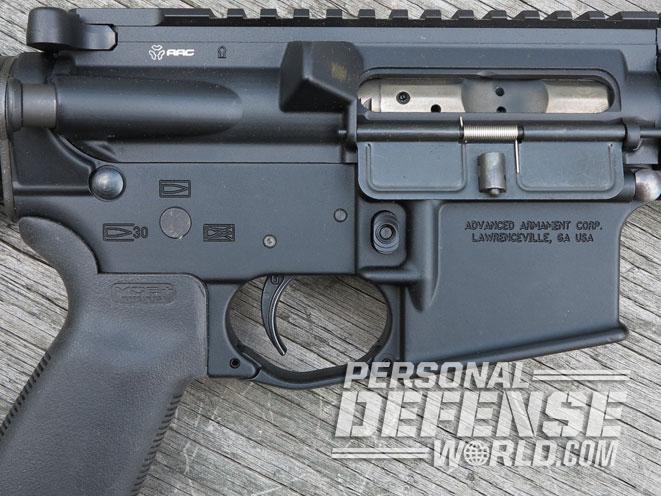 The MPW’s forged upper and lower receivers are of traditional AR design with several enhanced features for top-notch accuracy and reliability. These features include the premium-quality barrel, fire control group, bolt and bolt carrier, extractor, stock and quad-rail handguard, which add functionality well beyond a mil-spec AR in 5.56mm NATO. These added features are functional improvements—not just window dressing for cosmetic appeal.

Made to AAC’s own specifications, the barrel is button-rifled from bar stock. The barrel is nitride coated inside and out for corrosion and wear resistance. AAC explains that this coating increases barrel life by up to 60 percent more than chrome lining without the potential loss of accuracy from uneven chrome coating. The rifling has a 1-in-7-inch twist rate. AAC mentioned that the original design had a 1-in-8-inch twist, but the faster rate better stabilized long, 220-grain subsonic bullets, consequently allowing the use of shorter barrels without risking a baffle strike when using a suppressor. Baffle strikes on the 5.56mm NATO are more of a risk when barrels get shorter than 12 inches. The barrel features 5/8×24 threading and is capped with a 51-tooth AAC flash suppressor that allows for quickly mounting the company’s 762-SDN-6 suppressor, which AAC said reduces the sound signature by an average of 39.3 decibels using subsonic ammunition. 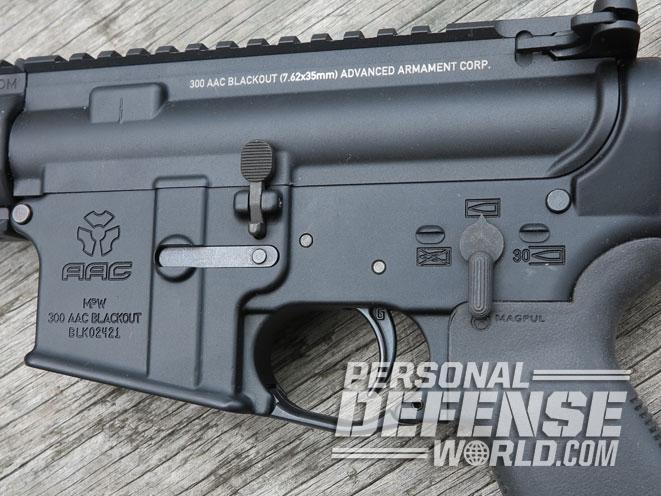 The MPW uses a Geissele 2 Stage (G2S) trigger. These triggers are made from tool-grade steel and through hardened (not surface hardened) with sear surfaces cut by wire EDM. The result is a much more durable trigger that releases more smoothly and consistently even after long-term usage and thousands of cycles. The first-stage pull weight of the G2S is approximately 2.5 pounds, and the second-stage weight is approximately 2 pounds to give a total trigger pull weight of approximately 4.5 pounds on a Lyman electronic trigger pull gauge.

The bolt and carrier are also built better than mil-spec. The carrier is full length for use in select-fire weapons and has a special, two-layer finish. The first is nickel and the second is nickel-boron. The process is designed to create a hard, corrosion-resistant surface that is slicker and creates less friction than untreated steel. Slickness matters most when using subsonic loads that may create marginal amounts of gas pressure needed to cycle the action. In what may be a first for an AR-15 production rifle, AAC uses gasket sealant to create a tight seal between the gas key and the carrier. Again, the idea is to use all of the energy created by subsonic loads to make the rifle reliable. 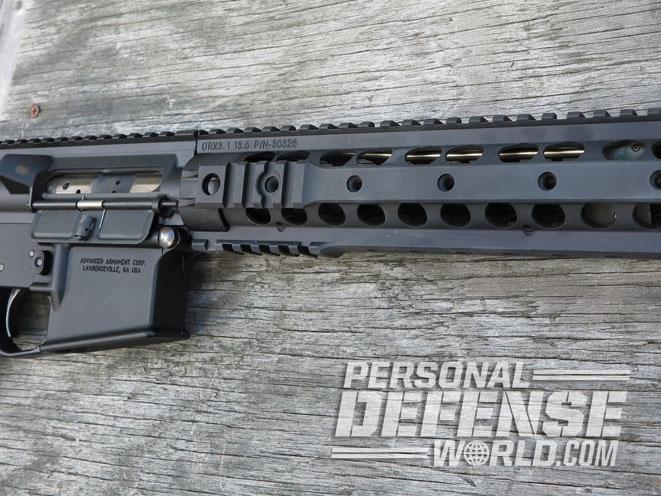 AAC was selective in what parts to use in the MPW, with the intended audience being tactical operators who would use a fully automatic, suppressed version. And other than the select-fire capability, the MPW for civilian use is equipped the same as models sold to the U.S. military. Full-auto fire puts stress on parts and exposes design weaknesses much sooner than semi-auto fire does. For instance, rail handguards and buttstocks shake loose, making accurate fire and a stable shooting position difficult. Extractor springs lose tension, creating difficult-to-clear stoppages—often at the worst imaginable time. The MPW uses parts that significantly lessen the chance of these failures. The Knight’s Armament URX III rail system free-floats the barrel and attaches directly to an integral barrel nut for a very rigid mount. The rail will be immobile as long as the barrel nut is properly set. AAC explains that they wanted a durable rail system that could be mounted with a controllable amount of torque. The Knight’s rail is full length and lightweight. It’s also comfortable enough to grasp bare handed without needing plastic rail covers to protect your hands. Those covers may look cool, but they add weight, cost and inevitably fall off in combat. 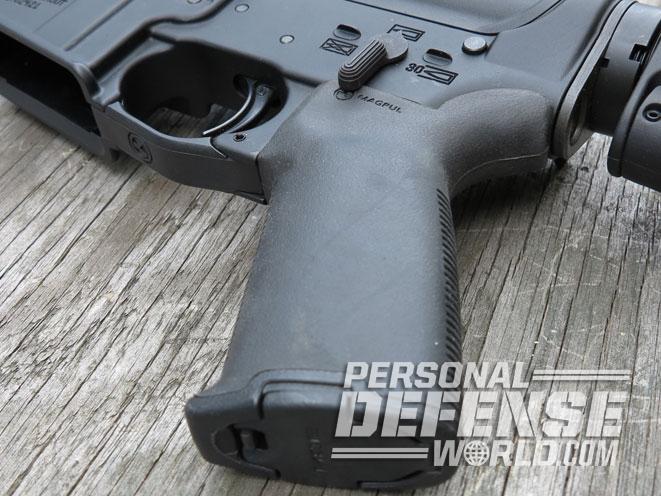 The four-position-adjustable Magpul CTR buttstock resembles many others on the market, but this version has a friction latch that locks the length-of-pull adjustment in place and almost completely eliminates wobble found on many telescoping buttstocks. Two sling mounts are available: a hole for QD swivels and a slot for wrapping the sling through the stock. The Magpul MOE-K grip is rubberized for a better, more comfortable grip than those made of hard plastic, and its rear portion extends upward to cover part of the lower receiver. It has a compartment for inserting Magpul grip cores for stowing a spare firing pin and AA- or CRE123-sized batteries.

The extractor is also upgraded with a stronger pin and a rubber O-ring. This ring was added to M4 Carbines a few years ago by USSOCOM because it provides four times more extractor tension than springs alone and eliminates extractor bounce. AAC cautions users to not use extra-power extractor springs and the O-ring together, as the extractor may not snap over the cartridge rim reliably. 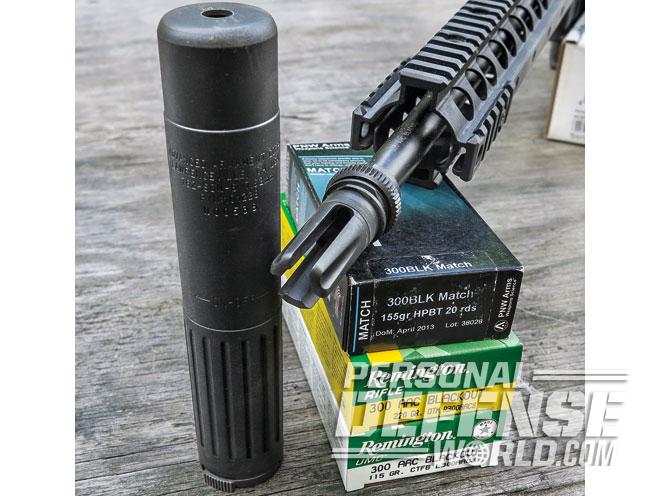 The AAC MPW is a well-made rifle with some additional high-quality features designed to meet the requirements of U.S. military units. In perhaps its best form, it has a shorter barrel and is equipped with a suppressor for clandestine operations in a role similar to a submachine gun, but with ballistics far superior to the 9mm or the .45 ACP. An ambidextrous safety and an extended charging handle are the only two additional enhancements that I would include on my rifle.