"At the forefront today are two new models, the CP99 Compact and PPS, both of which not only duplicate the size and operating features of the real 9mm handguns they are based upon, but also have blowback actions which cycle the slide and chamber the next BB from a magazine contained in the grip. This redefines “training gun” because these are real Walthers made by Umarex."

When Carl Walther introduced the 4.5mm (.177 caliber) CP99 air pistol in 2001, it was regarded as a “training gun” by the renowned German armsmaker. It was, in fact, so accurate in appearance, weight and general operation that German police departments (who carry the P99 and P99 variations) used them for training purposes. At the time, the CP99 was as close to “authentic” as an air pistol came, with the exception of the Beretta 92FS, which is also manufactured by Walther’s sister company, Umarex. Both, however, were pellet guns that fired eight rounds from a rotary magazine inserted at the breech.

Nearly 15 years later, these two models are still being produced, but over that same period Walther began planning even more authentic .177-caliber, semi-auto air pistols. At the forefront today are two new models, the CP99 Compact and PPS, both of which not only duplicate the size and operating features of the real 9mm handguns they are based upon, but also have blowback actions which cycle the slide and chamber the next BB from a magazine contained in the grip. This redefines “training gun” because these are real Walthers made by Umarex.

When Umarex began work on the latest CP99, the decision was made that it would have a blowback action for more realism and that it would not be the full-sized P99 version like the pellet gun, but rather the newer P99c (Compact) variant. While the CP99 is not an exact copy of the 9mm (and .40 S&W) compacts, it shares the same frame, slide and standard grip dimensions, trigger design and ambidextrous triggerguard magazine releases. Where the gun differs in actual operation is that the BB magazine and CO2 capsules are not contained within a single magazine, as they are in a number of current Umarex semi-auto designs. The BB magazine still loads into the grip, but it is a thin, stick-type mag with a grip-sized floorplate, and the CO2 capsule is inserted by removing the backstrap panel.

The air pistol also has a manual safety on the right side of the frame, which is not used on the cartridge-firing P99 models. The overall handling of the air pistol, however, is nearly identical, including the dustcover accessory rail (there is even a Walther laser available for the air pistol), the triggerguard configuration and the grip contour, making this an excellent training aid for drawing, re-holstering, slide operation, magazine release and sighting drills. The airguns are available in two versions, one with a black polymer frame and a black metal slide and a two-tone version with a brushed stainless slide.

In terms of weight and balance, the air pistol is a little heavier at 27 ounces; the actual P99c weighs 20.8 ounces unloaded, but the two have the same balance in the hand. When you pull the trigger on the CP99 Compact and the slide comes back, there is a sense of authenticity to this Walther air pistol that makes firing it an experience, even if you’re not using it to gain experience.

The first time you pick up the PPS air pistol, you have to wonder how Walther could make a $90 BB gun look and feel so much like a $599 semi-auto. The degree of detail Umarex has put into this air pistol to make it look and feel “authentic” also pays off in its value as a training gun. The PPS air pistol has the same operating features as the 9mm model with the exception of a blade safety in the trigger. This has been replaced on the air pistol by a cross-bolt safety that can be set and released with the trigger finger.

The trigger’s shape is the about the same and trigger pull a bit lighter at 5.2 pounds, compared to the 9mm’s 7.6-pound average. It is still enough resistance at nearly 5.5 pounds to give the feel of pulling a real semi-auto trigger. Among other important features duplicated on the PPS air pistol is the use of white-dot sights to match those on the cartridge-firing gun, the same slide and magazine release levers, an integrated under-muzzle Weaver rail for mounting a small tactical light or laser, and, of course, having to pull the slide to the rear to chamber the first BB. Thus, every operation once the gun is loaded is identical to firing a 9mm PPS.

For a head-to-head comparison, I tested the air pistol against a real PPS. The target was set out at 7 yards—perfect for blowback air pistol accuracy as well as CQB use with the 9mm. The comparison began with drawing the gun, chambering the first round (normally, one would carry the PPS with a round already chambered) and firing five rounds. In terms of draw, chambering, sighting and firing, the air pistol gives you the exact same handling with the exception of lighter resistance when chambering the first round. And, of course, there is no recoil to contend with.

The next part of the exercise was reloading. The PPS air pistol uses a separate stick magazine that holds 18 steel BBs, but it is still released from and loaded into the grip in the same fashion as a 9mm magazine. The practice is in actuating the ambidextrous magazine releases built into the triggerguard, reloading and releasing the slide to chamber the first round. Everything works the same way on both guns. Thus, for about $90, you can practice every aspect of handling the PPS without the expense of firing 9mm rounds. 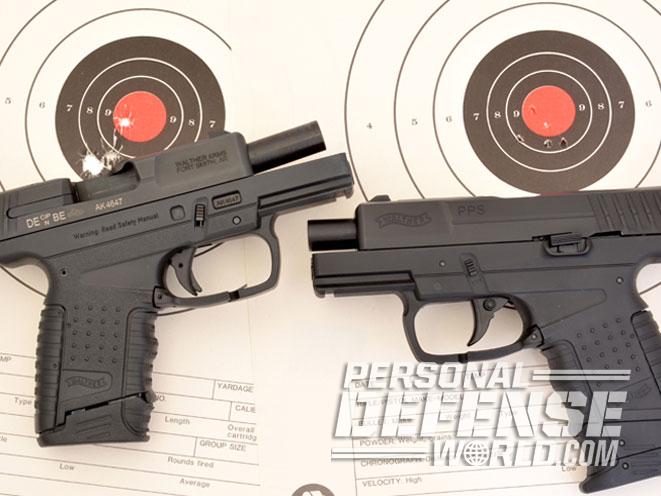 As for accuracy, the best five rounds of Federal American Eagle 115-grain FMJ fired from 7 yards while the 9mm PPS measured 1.2 inches. The air pistol nearly matched it with a best five clustered at 1.22 inches. The 9mm rounds clocked 1,124 fps while the PPS air pistol sends its .177-caliber steel BBs downrange at 350 fps. Sighting with both guns was virtually identical. The air pistol has a bit more creep in the trigger but it is close enough to the 9mm PPS to make it a viable training tool.

Overall, for training purposes, this is one of the best choices in an air pistol for practicing handling skills with a concealed-carry-sized semi-auto. And if you own or plan to purchase a 9mm PPS, it is a very small investment to become familiarized with the gun and its carry options (especially how comfortably this very narrow pistol can be carried) before laying down $599 for the real thing. And every time you take that BB gun out to go plinking tin cans, you are still practicing with a pistol very similar to the model you carry every day!