The newest version of the Walther PPQ M2 harnesses the power of the American-approved .45 ACP with a longer 4.25-inch, polygonal-rifled barrel -- all while delivering a respectable 12+1 capacity.

Offering a handgun chambered in .45 ACP is unprecedented for Walther. The company built its fortunes in the early 1900s on smaller-caliber .32 and .380 ACP models and the highly successful single-action/double-action PP (1929) and PPK (1930). In 1937, Walther introduced its first 9mm single-action/double-action model, the Heeres Pistole (HP), which became the famous Walther P.38. The only previous 9mm was the short-lived, single-action Model 6, which was produced from 1915 to 1917. In fact, since the P.38, the only step up in caliber has been to .40 S&W and even that took until 1999 with the P99 Series (and later P99 variations, including the latest PPQ M2).

Given Walther’s historic successes in .380 ACP and 9mm, increasing caliber options beyond .40 S&W never appeared to be on Walther’s radar, yet here we are with the first .45 ACP ever produced by the 130-year-old German arms maker.

The PPQ’s polymer frame (evolved from the benchmark, striker-fired P99) lent itself to changes that allowed Walther to vary its fundamental operation while developing the original PPQ (introduced in 2011) and improved PPQ M2 designs. By adding .45 ACP to the M2’s caliber options, Walther is now up against some pretty heady European competition from Sig Sauer, Heckler & Koch, FN, Beretta and Glock, not to mention Colt and all the various American manufacturers in the high-quality .45 ACP semi-auto field. But if any one arms maker can stand out in a crowd, it’s Walther.

The PPQ M2 is the second version. Among the features that distinguish the M2, introduced in 2013, is the carryover of the PPQ’s lengthy ambidextrous slide release, which provides the requisite torque to effortlessly drop the slide on the reload, whether you’re a righty or southpaw. More conspicuous with the M2 is that Walther replaced its successful triggerguard-mounted ambidextrous magazine release (introduced on the P99 and used on the PPQ) with a traditional frame-mounted release button.

According to Walther, people feel more comfortable with a traditional grip-mounted magazine release despite the proven effectiveness of the P99’s design. For many, this was considered a backward step with the M2. Differing opinions aside (I still favor the P99 design), the large button-style release has a deeply relieved surface behind it, a ledge below to prevent inadvertent activation, and it is easy to operate with only modest pressure from the strong-hand’s thumb. And while it is reversible for left-handed shooters, it is not ambidextrous like the P99 and PPQ designs.

Another key feature carried over from the original PPQ is the pre-cocked single-action trigger and its integral, blade-type safety. Walther calls its variation the Quick Defense trigger. This feature was actually first seen on the P99 QA variation introduced in 2000 (and discontinued when the PPQ was introduced in 2011). The Quick Defense trigger design eliminates the original P99-based decocking system as well as the visual and tactile tell provided by the striker status indicator protruding through the back of the slide. It’s a bit of a tradeoff since you not only give up the option to decock the gun with a loaded chamber, but also, more significantly, the double-action trigger and its second-strike capability.

This is another debatable change, but on the plus side, you gain the PPQ’s quick-reset trigger and integral safety (there is also an internal drop safety and firing pin block safety), its improved front and rear slide serrations and its enhanced grip texturing. And in a pinch, it only requires 0.25 inches of pull on the slide to reset the trigger mechanism for a second strike at a failed primer.

The PPQ M2 utilizes a traditional short-recoil, locked-breech design. In other words, it’s a modified Browning locking system with the barrel engaging the slide with a single, large lug. Field-stripping any P99-based Walther is quicker than almost any other semi-auto handgun on the market. First, release the magazine, clear the gun, point the muzzle in a safe direction and pull the trigger. Then push the slide back far enough to pull down the dual disassembly releases (in the frame, just forward of the trigger) and draw the slide forward off the frame. It takes less time to do than it does to explain, and reassembly is just as quick with the disassembly releases automatically relocking.

RELATED STORY: The Walther PPS is a Natural for Everyday Carry

The new .45 ACP version of the PPQ M2 has a longer 4.25-inch, polygonal-rifled barrel. The gun also sports adjustable, low-profile, white-dot sights, interchangeable backstrap panels and a respectable 12+1 capacity. Exterior dimensions are nearly identical to the 4-inch-barreled 9mm PPQ M2, with the .45 ACP model measuring just 0.3 inches greater in overall length and 0.5 inches in height. The width of the gun remains the same at 1.3 inches (including slide release levers and grips), while the slide itself is slightly broader.

There is also a modest 4-ounce gain in carry weight compared to the 9mm and .40 S&W models. Beyond that, the step up in caliber takes nothing away from the PPQ M2 while adding the proven fight-stopping capability of a .45 ACP round to Walther’s lineup.

I hate to give away the ending, but except for more recoil, this gun feels and handles exactly like a 9mm Walther P99, and that’s a good feeling. The trigger pull on the test gun averaged a lighter-than-expected 4.83 pounds on a Lyman trigger-pull gauge, and it functioned as smooth as any competition pistol with shot-to-shot consistency and a quick reset. Initial trigger travel is 0.5 inches with just 0.125 inches from let-off to reset. This is a very fast gun.

The PPQ M2 performed without fault with all ammo, with the majority of shots striking within the B27 target’s center body mass (9, 10 and X rings). The best group delivered was an even match between Sig Sauer and Hornady, both measuring averages of 1.75 to 1.85 inches. Federal was a hair better with a best five spread over 1.5 inches and a second group at 1.75 inches. There were no hits outside of the 9 ring, and all three loads produced overlapping hits for an average best three across the board measuring 0.75 inches. All rounds were fired off-hand from a distance of 25 yards using a Weaver stance.

The PPQ M2 proved consistently manageable in terms of recoil and follow-up speed regardless of ammo thanks to its lightning-quick trigger reset. Dropping empty magazines for reloads was also seamless with the new button-style release. The deeply grooved slide serrations provide a solid purchase when chambering the first round or clearing the gun, the finishing touch on what is unquestionably one of the better designed .45 ACP semi-autos around and a welcome addition to the Walther family. 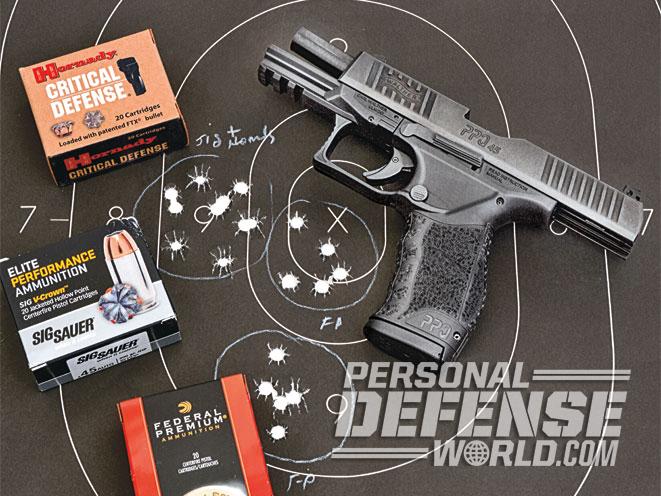 In my estimation, the Walther P99 has always had superb handling characteristics, excellent balance in the hand and a simple manual of arms. The PPQ M2 is really no different in that respect, and while I admit to missing the P99’s decocker, the Quick Action trigger offers an equal degree of ease and safety when carrying the PPQ M2 with a chambered round. Like all of its predecessors, the PPQ M2 in .45 ACP is an ideal sidearm for civilian self-defense or law enforcement and military use, and that fulfils the ideals of every Walther handgun design for generations.