Bill Laughridge has taken the original design of the 1911 and updated key features while retaining the classic markings and design.

For more than 30 years, many have considered Cylinder & Slide to be the premier 1911 shop in the world. Founder Bill Laughridge has established a reputation that extends from working with cops and military special operations to royal families and their protective details. Indeed, Fremont, Nebraska, is for many the center of the 1911 world. From minor repairs to complete custom builds, Laughridge and his talented staff do it all.

If there were a doctorate degree in 1911 studies, William R. Laughridge’s name would be on the first diploma. In early 2010, Laughridge and I were discussing the upcoming 100th anniversary of John Moses Browning’s 1911 pistol. The Colt 1911 was officially adopted by the U.S. military on March 29, 1911, and he knew that a lot of companies would be producing a 100-year anniversary model. Laughridge had a vision that went well beyond simply dressing up a current production pistol. He envisioned building 100 exact replicas of the original 1911. If anyone could pull this off, it was Bill Laughridge.

To accomplish this, Laughridge put the word out about his concept and began receiving phone calls from collectors. As he explained his vision, the owners of these vintage warriors not only shared their treasures, but allowed Laughridge to disassemble their guns. In the end, he was able to examine a two-digit-serial-numbered pistol and three pistols with serial numbers under 500.

Through extensive research, he found that there were 18 specific parts that were unique to the original, first-production 1911s. To quote Laughridge, “Many people are unaware that there were many slight changes in some of the internal parts as time went by. As with any newly designed firearm, there were breakages of some of the internal parts as the number of rounds fired through the pistols increased. So Colt redesigned the parts that failed, to increase their strength but still allow direct replacement of the original parts without other modifications to the pistol.” 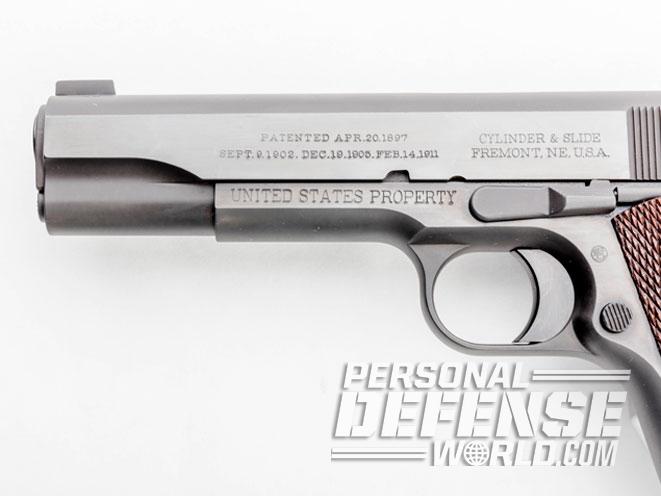 Laughridge started off by turning to the company that makes his Cylinder & Slide OEM slides and frames. The company agreed to do a limited run of slides and frames that were manufactured to the original specifications based on measurements from examination of the early guns. Some of the unique features included the correct cocking serration pattern on the rear of the slide and sharper radius cut on the front slide, in front of the dust cover. The ejection port has a smaller, non-relieved port as on the original. The frame was also made to the original specifications with the proper dimensions for the grip safety and with no scallops at the rear of the triggerguard.

The roll markings on the Colt 1911 are an integral part of the historic appearance. The roll marks on the C&S 1911 use the same font and style as the original. The original patent dates are rolled on the left side of the slide, though Laughridge couldn’t use the Colt name or the “rampant horse” logo. Instead, the slide is marked “Cylinder & Slide Fremont, NE, USA.”

As with the original pistol, “United States Property” is rolled on the left side of the frame’s dust cover. The right side of the slide is rolled with “Model of 1911” and each serial number is hand stamped on the frame in the correct location. To match the high luster blue on the original commercial Colts, Laughridge’s gunsmiths spent up to 15 hours in polishing prior to the gun being sent to Doug Turnbull for bluing.

I was fortunate to be able to evaluate the anniversary gun for the May 2012 issue of Combat Handguns. While the anniversary gun was a tremendous success, it was both expensive and very labor intensive to build. After the initial guns had been produced, the demand for additional guns caused Laughridge to look for a suitable follow-on model. He settled on what is now known as the Cylinder & Slide Modern Classic.

The Modern Classic features the same slide and frame of the anniversary model. A keen observer will note that the frame is not marked with the manufacturer’s name, city and state. Laughridge explained that he applied and received a variance from BATFE after explaining that the frames would never be sold as a part. This variance allowed him to use the “Cylinder & Slide Fremont, NE USA” roll marks on the slide to meet this requirement. A second variance allowed the original serial number to be engraved under the stocks. After the flats of the frame are polished in preparation for the high-luster bluing, the same serial number is later rolled onto the right side of the dust cover.

The Modern Classic is designed to be a retro pistol that is suitable for daily carry and personal defense. As such, several changes were made from the anniversary gun. The most noticeable enhancement is the hardball fixed sights. The rear sight is an elevated fixed blade while the front sight is a dovetailed post. As expected, the base of the front sight has been contoured to the radius of the slide, making the seam almost invisible. The checkered slide stop was replaced with a modern serrated version and the hammer and grip safety are the same configuration as found on the 1911A1. Since this is a defensive pistol, the original-style thumb safety was replaced with a C&S extended safety.

The magazine catch is serrated and held in place by the flat-head screw as on most 1911 models. The frontstrap of the frame and mainspring housing are smooth, and the mainspring housing is lacking the lanyard loop. The ejection port has also been relieved to aid in reliability. A C&S barrel is hand-fitted and the feed ramp is beveled and polished. The internal fire control parts and mainspring guide are current C&S production parts. Another functional modification is the beveled magazine well.

Rounding out the features are Laughridge’s reproduction black walnut stocks that are hand-checkered with 15 rows of small diamonds between the tips of the large diamonds and finished with Tung oil. Cylinder & Slide does all of the finish prep and bluing for the Modern Classic in-house. The flats of the slide and frame are polished to a high luster, while the top of the slide and other edges are left in a matte finish. 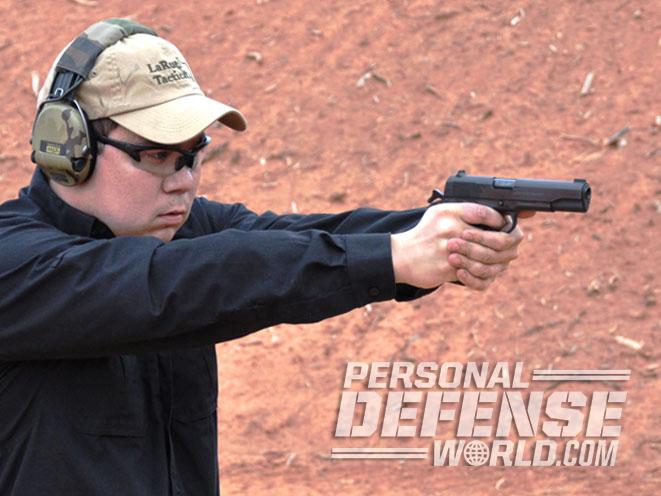 When I received the Modern Classic, it was everything I have come to expect from C&S. The lines were clean, the roll marks were crisp and the bluing was exceptional. The trigger on our test pistol broke cleanly at 5 pounds and was void of any creep. The Modern Classic is really a wolf in sheep’s clothing. As I expected, it devoured every .45 ACP load I put through it without any issues. The C&S magazine featured an improved follower and feed lips that ensured reliability.

On the range, we tested the Modern Classic with three loads of varying weights. The first was Remington’s proven 230-grain Golden Saber jacketed hollow point (JHP). The Golden Saber averaged a mild 844 fps and, at 25 yards, produced a group that measured 2.44 inches. Hornady’s 185-grain FTX Critical Defense is one of the best personal defense loads on the market today. The Critical Defense averaged 1,007 fps and produced a 2.77-inch group. Finally, we tested HPR’s new BlackOps ammunition. The BlackOps .45 ACP load is a 150-grain, open-tip, frangible projectile that is designed for law enforcement and personal defense. The BlackOps round averaged 1,129 fps with a group that measured 2.77 inches.

A classic pistol deserves classic leather. For this I turned to the great folks at El Paso Saddlery Co. Having been in business since 1889, El Paso Saddlery knows a thing or two about leather and holsters. It has provided holsters to cowboys, banditos and lawmen for well over 100 years. Today, the company is still making the authentic western rigs along with modern concealment and sports holsters. You will not find any Kydex in its shop. All of their holsters are cut from premium hides that are handcrafted from start to finish

The Austin is a classic Texas Ranger holster that features a full back flap that’s contoured and hand-sewn to the body of the holster. Even though this is a classic design, the Austin provides full grip clearance and features a safety strap that rides between the cocked hammer and the firing pin. To complement the Austin, El Paso Saddlery offers a matching River Belt and the 1911 double magazine pouch. Were I headed to an old-fashioned Texas barbeque, the only thing that could improve the pistol would be ivory stocks. 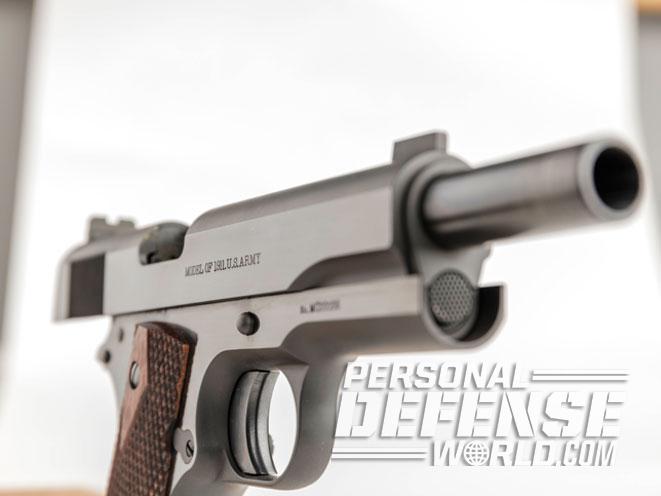 Over the years, Cylinder & Slide has created some pretty spectacular pistols. These include the compact .45 ACP Adventurer and the superb, cut-down Browning Hi Power known as the Pathfinder. One of the company’s most unique pistols to date has been Laughridge’s .45 ACP version of the classic 1903 Hammerless Pocket Pistol. The original 1903 was chambered in the anemic .32 ACP. Laughridge took a Commander-length slide and an Officer’s model frame and created the Hammerless Model of 2008. If you are not familiar with this project, I recommend that you look it up. It is an exceptional pistol and reflects the true genius of Laughridge and the C&S crew.

So the question is, what will Laughridge do for his next project? Several years ago, he visited the John Moses Browning museum in Ogden, Utah. During the visit, he was able to examine a number of early prototypes, including a Colt 1910 .45 ACP pistol. The Model of 1910 was the prototype to the 1911 and has always fascinated Laughridge. Maybe we’ll see a limited run of 1910 pistols in the future.