by Len Waldron
in Guns, Handguns
0

The Vickers Elite starts with Wilson’s precision-machined and hand-fitted forged slide and frame combo along with its match-grade barrel. Reliability and accuracy are built right in.

Expectations can be a double-edged sword. A Wilson Combat and Larry Vickers 1911 collaboration carries with it considerable momentum from both a design and production quality standpoint. Today, Larry Vickers is well known in the gun industry for his TAC-TV television show, but his career started in the U.S. Army, where he served as a non-commissioned officer in both the Special Forces and as a member of the 1st Special Forces Operational Detachment-Delta.

During his time as a Tier-1 operator, Vickers developed a passion for pistols and took particular care to learn from the gunsmiths that serviced the unit’s highly modified issue 1911s. Vickers began hand-fitting his own custom 1911s and developed a reputation for accurate, consistent and reliable custom pistols. He is also a co-founder of the IDPA and the namesake of the “Vickers” scoring system. After retiring as a master sergeant from the Army, Vickers worked for several firearms manufacturers and became a sought-after shooting instructor.

Recently, Vickers just passed the 5,000-student mark in his 10 years as a combat shooting instructor. Wilson Combat, by contrast, has been turning out high-end production 1911s for decades. So what should we expect when a guy like Vickers puts his name on someone else’s pistol? Should it have more impact on the end product than a tennis player pimping a camera? Well, yes, most gun buyers, being a typically demanding group, would expect so. In this case, they won’t be disappointed, as Wilson Combat has delivered a fantastic pistol in the Vickers Elite. 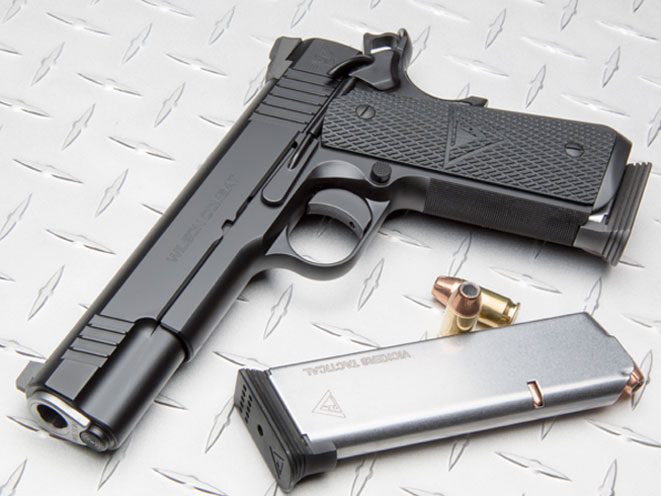 Vickers has long been associated with Wilson Combat as a designer of a line of Glock sights and as a brand ambassador, but this project was different, given Vickers’ reputation with the 1911. Vickers noted, “The Vickers Elite is my idea of a refined duty-style 1911—certainly an individual can get by with a much more basic pistol, but all involved felt it made sense to bring to market a higher-end 1911 that separates itself from the crowd. People buying pistols like this aren’t your typical 1911 buyer, so we wanted to make something distinctive that they would be proud to own.”

A 1911 snob could make a fair and solid argument that the best thing Vickers did in his collaboration with Wilson Combat was to start with the CQB Elite as the base model for the Vickers Elite. Like the CQB Elite, the Vickers Elite is a pistol built for serious real-world use. It’s a full-sized (5-inch) 1911 with a carbon steel frame and slide and a standard, single-stack, eight-round magazine. It has no ornamentation, chrome or scrollwork—it’s all business from muzzle to mag well.

Though Wilson Combat can customize Armor-Tuff finishes in five colors, Vickers’ preference is a black slide over a gray frame. It features a bobbed high-ride Bullet Proof Beavertail Grip Safety behind a 3.5- to 3.75-pound, medium-length trigger. The slide top, the high-cut checkered front and the backstraps are serrated at 30 lines per inch (lpi), with 40-lpi serrations on the rear of the slide. Both weapons also feature Wilson’s signature Bullet Proof single-piece magazine well and magazine release. Ultimately, the Vickers Elite gun’s DNA is pure Wilson Combat.

But in Vickers’ years of service, pistolsmithing, competition and shooting instruction, he has come to appreciate a short list of particularly practical modifications. Rather than the ordinary 20-lpi cocking serrations seen on most modern, full-sized 1911s, Vickers chose to remove every other serration, creating wider “grasping grooves” that enhance the shooter’s purchase on the slide, particularly when wearing gloves or manipulating the weapon with wet or slippery hands.

Vickers also opted for the “round butt” magazine well and a countersunk slide stop. He also specified a heavy machine chamfer on the bottom of the slide to eliminate the sharp edges, and ball-end mill cuts below the front grasping grooves. The rear sight is Wilson’s serrated, 0.145-inch-wide, concave, U-Notch Battlesight, though Vickers opted for a more traditional, gold bead front sight.

Vickers also tweaked the stainless steel, match-grade barrel by specifying a thick flange bushing and a flush-cut, reverse crown. The muzzle’s look is clean and smooth, but the design also protects the crown in the event the pistol is dropped. The barrel is fluted to create space for debris to accumulate, thereby enhancing reliability. It has a Wilson Combat Tactical Bullet Proof Thumb Safety and a flat wire recoil spring. Wilson Combat has tested this spring design to service lives of up to 10 times conventional round springs. Besides the longer spring life, the flat spring compresses in a more linear manner, making it more tolerant of a wider variety of loads and shooter grip styles.

Finally, both the G10 checkered grips and the slide feature the Vickers Tactical logo. The Vickers Elite is a standard catalog item in the Wilson Combat lineup and can be ordered chambered in .45 ACP or 9mm and retails at an MSRP of $3,850.

Though a lifelong student and industry expert on the 1911, Vickers concedes to some design flaws in the original platform. The most significant, from a reliability standpoint, is the magazine. Vickers noted, “The magazine on the 1911 is not one of Browning’s finest efforts. The original design allows the feed lips to spread easily with use, which in turn affects the ability of the gun to eject an empty magazine cleanly. Fully loaded, the magazine is difficult to seat with the slide forward, and the holes in the side as well as at the top allow for easy ingress of debris.” With this in mind, Vickers set out to improve the design with the Wilson Combat team.

“Most of the 1911 magazines on the market today are designed to be better for competition, not duty use,” said Vickers. His first change was to close off the holes on the side of the magazine to reduce the entry of debris. A single, small hole in the back functions as an indicator that the magazine is fully loaded. Next, the team molded grooves into the side of the follower to create less friction and allow the follower to move past debris inside the magazine tube. Like the recoil spring, the magazine features a long-life, flat spring design. The tube is also slightly longer, enhancing the ability to seat the magazine with the slide forward. The steel baseplate is enlarged and enhanced to improve both grip and manipulation of the magazine. The overall magazine is just over 1 ounce heavier than most standard versions. Vickers also added, “The only change the end-user may want to make is the baseplate, depending on their personal requirements. All told, I think it’s the best serious-use .45 ACP 1911 magazine on the market.”

When first taken to hand, the Vickers Elite grabs your attention as a serious but refined handgun. It doesn’t shine, rattle or squeak, rather it is a tight machine that snaps and responds. The controls and grips are neither underdone nor oversized, and the steel-baseplated Vickers Duty magazines drop from the mag well like a commando from a jump door.

Firing, the Vickers Elite is the same—crisp, precise, and smooth. The gold bead sight is a nice, classic touch that might be a disappointment to some with older eyes or advocates of night sights, but it’s a perfect complement to the U-Notch of the Wilson Combat Battlesight. Both are easy on the eyes in daylight and moderate lighting conditions.

From an accuracy standpoint, the Vickers Elite continued to match or exceed expectations across a range of loads. From a bench-supported position, I tested groups at 10 yards. The pistol handled the 185-grain TAC-XP +P rounds the best. Black Hills and Wilson Combat 185-grainers grouped at 0.72 and 0.98 respectively. Wilson Combat guarantees 1-inch groups at 25 yards. The Vickers Elite, in the right hands, is certainly capable of hitting that mark with regularity.

But how does a 1911 hold up to heat and fouling? That’s always the question with a tight-tolerance piece such as those that come out of Wilson Combat’s shop. I gave it a fair run trying every reasonable-use test to get it to break or fail. It didn’t. Through hundreds of rounds and seven different .45 ACP loads it got understandably hot and dirty, but there wasn’t a single failure to fire, feed or extract.

The only item that was less than perfect was a the steel buttplate on one of the Duty Mags that got a bit loose after it hit the concrete several times.

At $3,850, the Vickers Elite is not a handgun priced for everyone, but in light of what similar design features and craftsmanship would otherwise cost on the open market, it’s a turn-key solution for a shooter looking to own an incredibly high-quality, duty-ready 1911. If you are an experienced 1911 owner, the Vickers Elite will make you wish you started with it first, rather than buying, trading and building your own to learn what the experts already knew. If you are going to buy a 1911 and start with the Vickers Elite, well, you have saved years of time and thousands of dollars over the rest of us.