"The complaints that arose from consumers about the first Pico’s heavy trigger pull and the effort required to rack the slide, on what was (and remains) the thinnest, most compact and feature-laden .380 semi-auto pistol ever made, were all well founded. Beretta took notice, began reworking the design and, two years later, even followed through on its promise to introduce an unrivaled number of interchangeable accessories."

Sometimes you don’t quite get it right out of the gate. For Beretta, the innovative Pico was to be the .380 ACP counterpart to the successful 9mm Nano that was released in 2013, albeit with an internal hammer rather than a striker-fired system. The Pico was an excellent design on the surface, but like many subcompact pistols, in order to make it small enough for concealed carry some compromises had to be made.

The thing is, compromise often isn’t part of the original plan. It just happens. The complaints that arose from consumers about the first Pico’s heavy trigger pull and the effort required to rack the slide, on what was (and remains) the thinnest, most compact and feature-laden .380 semi-auto pistol ever made, were all well founded. Beretta took notice, began reworking the design and, two years later, even followed through on its promise to introduce an unrivaled number of interchangeable accessories.

Like the Nano, the Beretta Pico has an interchangeable, one-piece, molded polymer frame housing and a removable stainless steel fire control subchassis, which includes frame rails, a trigger, and the internal hammer firing system. Interchangeable subchassis and frames (which have also become a successful design with Sig Sauer and its P320 series) offer multiple variants within a single registered handgun. The subchassis is considered the actual gun and not what surrounds it, and as such the Pico’s polymer frame can be changed for different colors. The choices are standard black, ranger green, Flat Dark Earth, lavender and pink, as well as two specialized LaserMax frames with a choice of either an integral red laser or a tactical light. The little .380 even has interchangeable, dovetailed white-dot sights that can be switched for optional Beretta Trijicon three-dot night sights. In total, this makes the Pico the single most versatile .380 pistol ever designed.

The Pico also shares another Nano feature—a remarkably simple takedown procedure that requires no levers to rotate, pins to remove or alignment points. In fact, it requires nothing; there’s just one large slotted screw on the right side of the frame, which, with a one quarter turn counter-clockwise (using the edge of a shell casing), allows the slide, barrel, recoil spring and guide rod assembly to be pulled forward off the frame rails. The screw even automatically rests in the locked position when the slide assembly is slipped back onto the frame rails. It doesn’t get any easier.

Making a frame and chassis swap requires one additional step, and it literally takes about a minute. After performing the takedown procedure and removing the slide assembly, rotate the disassembly screw until the round side is up in the frame (the flat side shows during normal disassembly), press it through the frame and remove it. From there, the fire control chassis lifts out by the front rails and pulls forward out of the frame. To insert it into a new frame (I opted for the LaserMax red laser frame), slide the rear of the chassis in first, pull the trigger back enough to drop it into the frame’s trigger opening and then press the chassis into the frame. Replace the disassembly screw, rotate it to the flat position and replace the slide. The screw automatically locks back into place. That’s a wrap—you’re done! 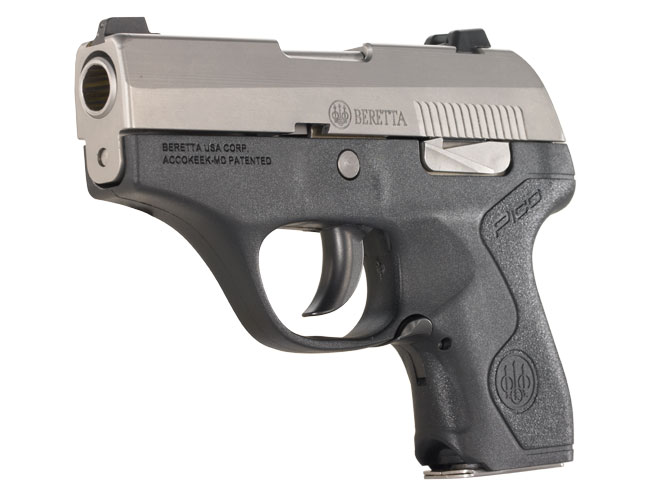 The Pico is a hammer-fired semi-auto based on the John M. Browning design utilizing a linkless barrel with a solid camming lug and a squared breechblock face engaging the slide. The locked-breech design is less common in .380s, many of which rely on basic blowback actions (with the barrel affixed to the frame). This, of course, would never work with the Pico’s interchangeable frames, and in point of fact there are certain advantages to a locked-breech design over blowback operation, even with a .380 pistol.

The double-action-only Pico has no manual/external safety, and its trigger design allows second-strike capability. While this is a minor point, in the event of a failed primer, the difference between pulling the trigger again and having to rack the slide can become a major point. Not all .380 semi-autos offer second-strike capability, or even locked-breech double-actions like the Ruger LCP. The Pico’s slide also locks back after the last round, and the Beretta does not employ a magazine disconnect, thus it will fire a chambered round without the magazine. The Pico has very good balance in the hand, especially when using the second magazine that comes with the gun, which has a deep finger extension allowing for a full-hand grip, not just a third finger rest like some others.

It was the heavier-than-normal trigger pull that first raised attention to the original Pico’s shortcomings. The original trigger pull was close to a 9-pound average, noticeably heavier than the average .380 and nearly 2 pounds more than some DAOs. The revisions to the trigger, which was comprised of lightening the hammer spring, made the new Pico slightly easier to shoot, but it has not significantly reduced trigger pull, which still has over an 8-pound average. Travel measures exactly 0.5 inches with zero overtravel and quick reset. This version definitely has a smoother trigger pull but it is still heavy compared to many other DAO .380s.

The second issue was with recoil spring resistance when racking the slide. Rafe Bennett, Beretta USA’s VP of product management, explained that the revised recoil spring design lowers racking effort by 10 to 20 percent, making the gun easier to operate. The new design continues to help mitigate muzzle lift and, in combination with Beretta’s straight-line action (requiring the barrel to tilt just 1.4 degrees during the recoil cycle), helps ease recoil with the polymer-framed, 11.5-ounce pistol.

On to the slide release. It is nearly flush with the slide and rests in a recess molded into the polymer frame. While necessary to maintain the Pico’s svelte width, there is barely enough surface area to lay your strong-hand thumb into to release the slide on the reload. If you can get enough thumb pressure on the side of the release during a reload, it will drop easily, but it takes practice. According to Bennett, Beretta is considering an optional extended slide release lever. While that would increase the width of the Pico by a small degree, “being an option would not alter the Pico’s original specifications,” explained Bennett. A slight increase in width would make the slide release significantly easier to operate.

In the world of pocket pistols size matters, and when it gets down to fractions of an inch for concealed carry, the Pico earns its name. This is the narrowest semi-auto pistol available, measuring a scant 0.71 inches at it widest point, less than its closest competitor, the Ruger LCP. The Pico’s slide is even a pinch thinner, measuring 0.68 inches. Width is truly the most important feature to look for in a pocket-carry sidearm. The narrower the gun, the less likely it is to print through a pocket.

The magazine’s finger extension makes the pistol more manageable to draw and shoot by adding a full inch to the height of the gun (which is 3.875 inches with the flush floorplate magazine). In length, the Pico measures 5.1 inches, making it one of the shortest .380s on the market. Overall, the Pico is small enough to holster totally out of sight either in a pocket rig or one of two new belt holsters manufactured for Beretta by DeSantis. 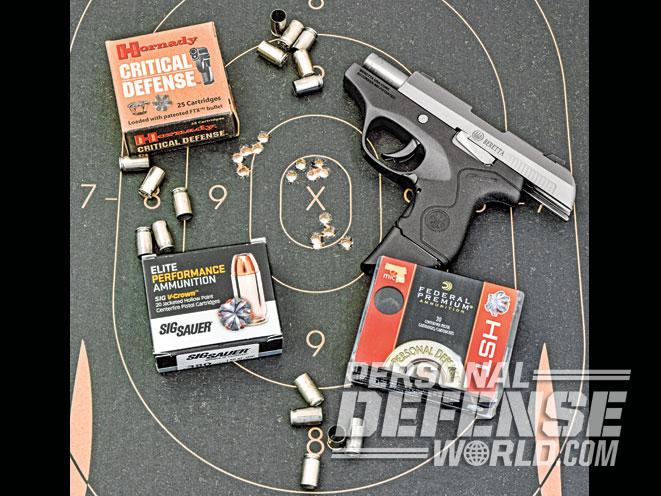 The ammo selected for the Pico range test were Sig Sauer’s Elite Performance 90-grain V-Crown JHP, Federal Premium’s new heavy-hitting 99-grain Personal Defense HST JHP and Hornady’s Critical Defense 90-grain FTX. The target was a B-27 cardboard silhouette set out at a distance of 7 yards with all shots fired at 1-second intervals using a Weaver stance. Although it offered the heaviest grain weight, the new Federal 99-grain HST JHP was also the fastest round, and the one with the most recoil, clearing the chronograph’s traps at 912-fps average. The 90-grain Hornady JHP and Sig Sauer 90-grain JHP had virtually identical averages through the Pico’s 2.7-inch barrel at 880 fps. When it comes to accuracy, this gun lives at 7 yards, with the best five-round groups all averaging 1 to 1.1 inches, and all with overlapping hits.

The Beretta Pico’s standard white-dot sights are excellent under most lighting conditions, and the optional night sights make this an ideal close-range, 24/7 carry gun. Add the LaserMax red laser or tactical light frames and the Pico is the .380 to beat when it comes to options and features.