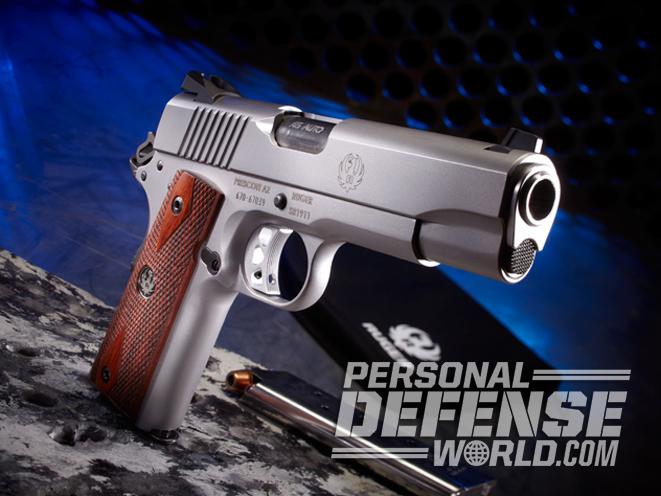 1 of 12
Photo by Steve Woods
Ruger SR1911
Ruger’s Commander-style SR1911 is an all-stainless-steel update of the classic 1911 design made with modern technology and features. 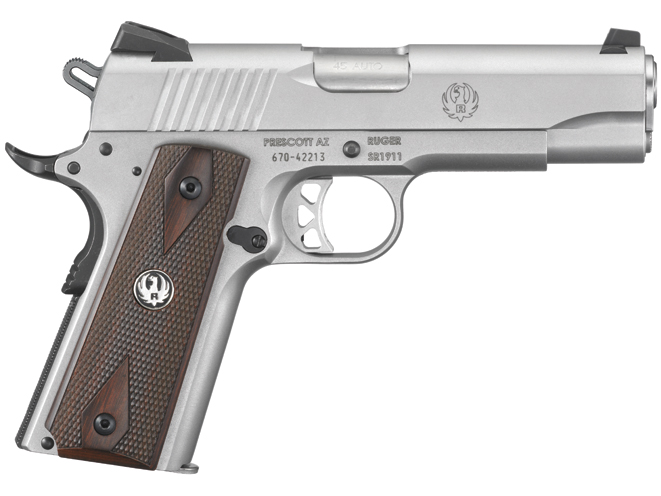 2 of 12
Photo by Ruger
Ruger SR1911
Compact and lighter than the full-sized SR1911, the Commander version is made of stainless steel and weighs 36.4 ounces unloaded to help absorb felt recoil. 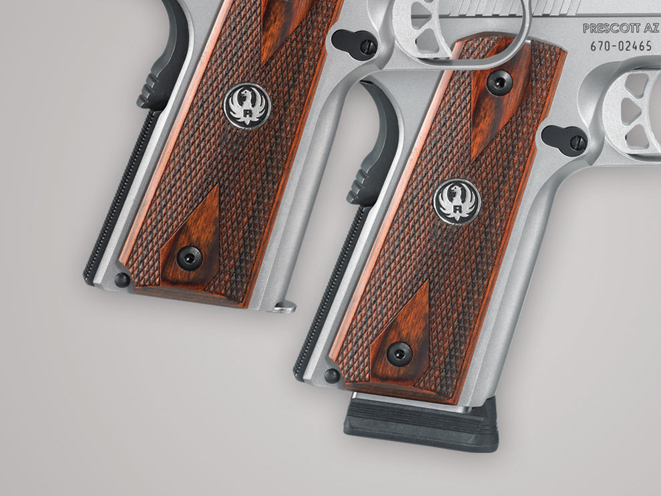 3 of 12
Photo by Ruger
Ruger SR1911
The pistol comes with flush-fit seven round mags (left), but Ruger offers eight-rounders (right). 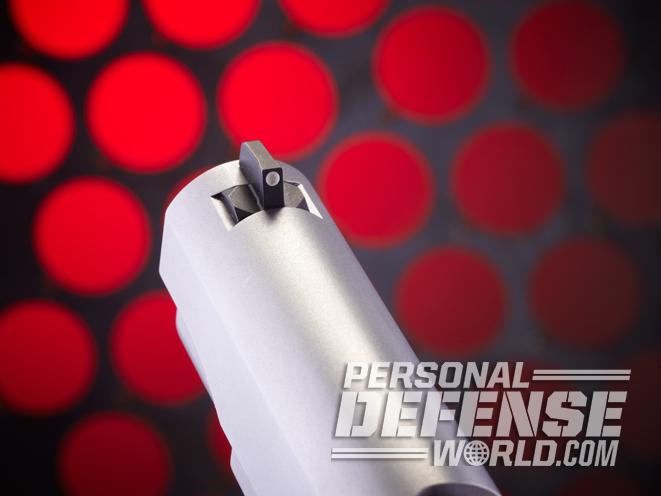 4 of 12
Photo by Steve Woods
Ruger SR1911
The SR1911’s white-dot front sight is dovetailed into the rounded slide. 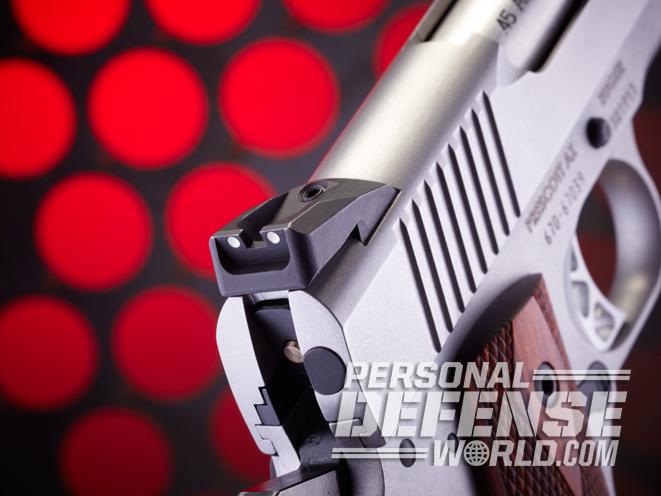 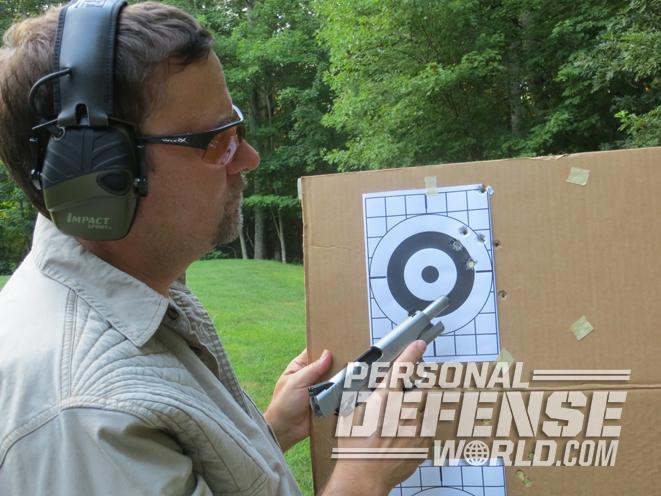 6 of 12
Photo by Robert Sadowski
Ruger SR1911
The Commander-style SR1911 produced tight groupings at 25 yards with all of the test ammo. 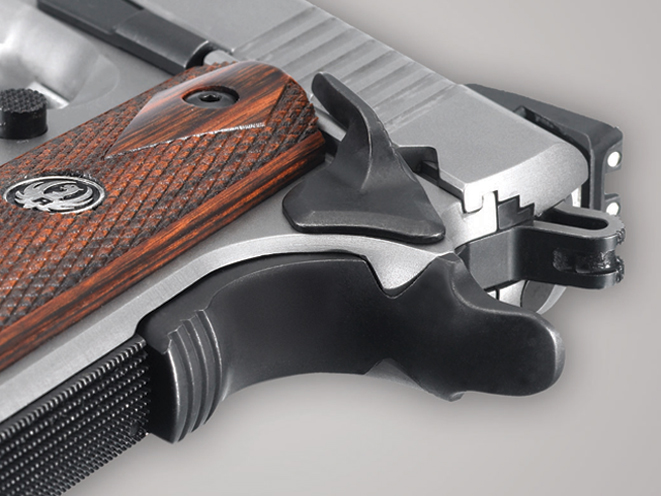 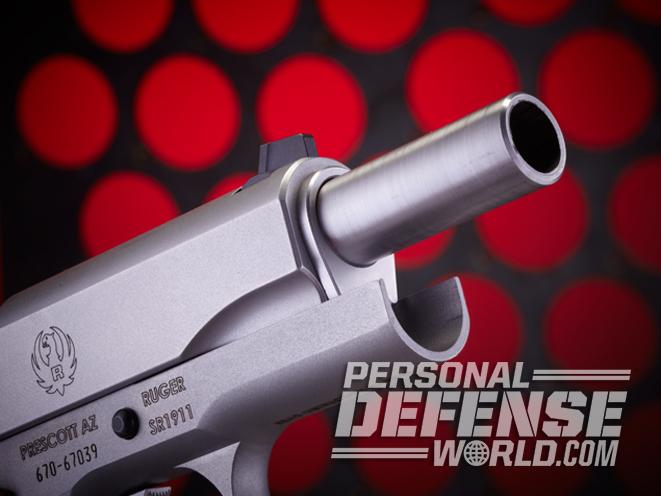 8 of 12
Photo by Steve Woods
Ruger SR1911
The stainless barrel bushing and barrel are produced from the same bar stock. 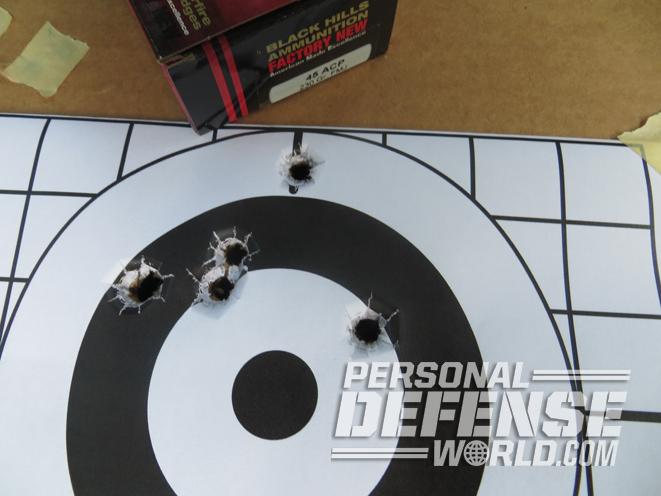 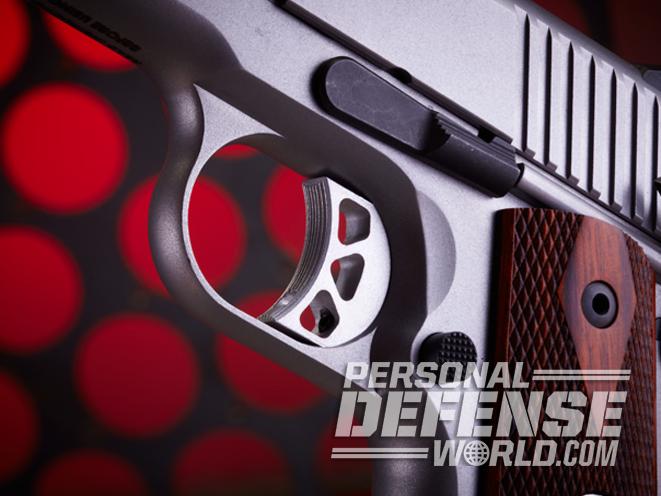 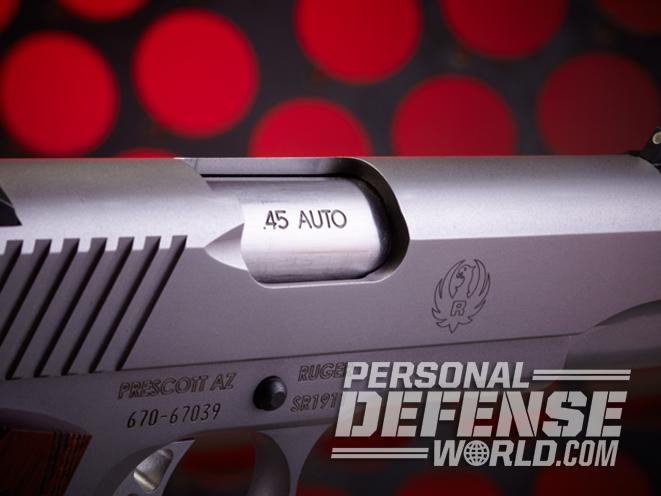 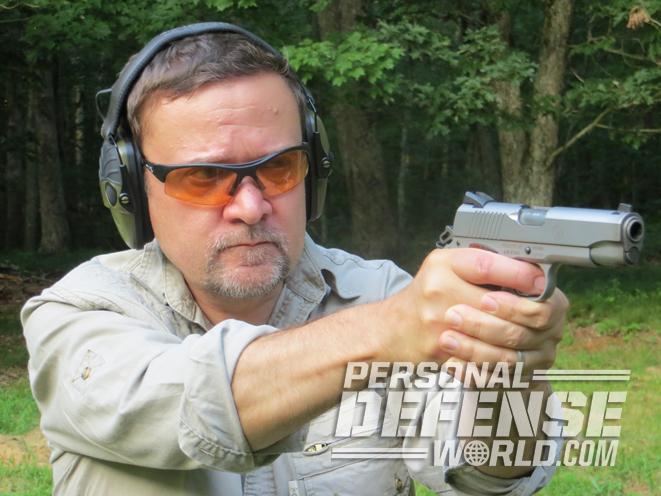 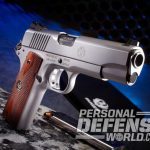 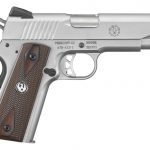 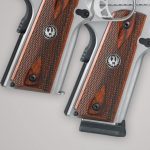 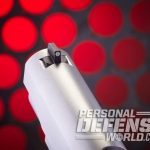 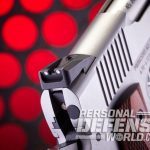 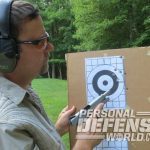 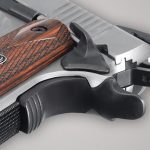 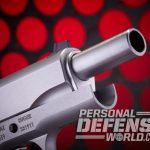 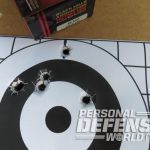 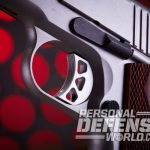 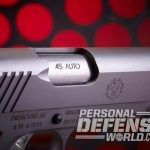 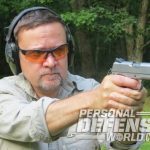 Shorten the barrel on some pistols and their balance is drastically altered. But if you lob off 0.75 inches from the business end of a full-sized Government Model 1911, you’ll have a well-balanced pistol that is more concealable while still packing .45 ACP firepower. You’ll have what’s known as a Commander-style 1911, and Ruger offers a variant of its venerable SR1911 platform just for this purpose. It truly commands attention.

The shortened 1911 concept hit the commercial market in 1951 when Colt debuted the Commander. The Commander concept grew out of the U.S. military’s search for a replacement for the M1911 issued to officers. This was after World War II, about 1949, and the requirements specified a 9mm pistol with an overall length of 7 inches and an unloaded weight of 25 ounces. Colt produced the test pistol based on a shortened M1911 design. It was novel because it used an aluminum frame and was Colt’s first pistol chambered in 9mm. The military scrapped the idea of a new officers’ sidearm, but Colt

brought the shortened 1911 to the market and called it the Commander. It was chambered in 9mm, .38 Super and .45 ACP. The Commander label is now used for 1911s with a full-sized receiver or frame and a 4.25-inch barrel.

What’s attention-getting with the Commander-style Ruger SR1911 is its construction, features, performance and cost. It is also all American made. The SR1911 features a stainless steel frame, slide and barrel. The frame is a casting that might make a 1911 purist cringe, but before you roll your eyes, Ruger worked closely with Caspian for the development of their frame. That’s fortunate for Ruger, since Caspian has been carefully refining the tooling for the last 20 years or so. The frame is investment cast in Ruger’s Pine Tree Castings foundry in Newport, New Hampshire. The frames are then machined in-house at Ruger’s Prescott, Arizona, facility, where the balance of the major components is machined and the pistols are assembled. The Ruger pistol also incorporates an important modification: The plunger tube for both the slide stop and thumb safety is integral to the SR1911’s frame, meaning it should never loosen, even under hard use.

The slide-to-frame fit is tight and precise. Ruger uses precision CNC machines to achieve these tight tolerances. The barrel and bushing are produced at the same time from the same ordnance-grade, bar-stock steel. This helps achieve a precise fit, and it shows in the pistol’s accuracy. A visual inspection port at the breech end on the barrel allows the user to visually confirm that a round or casing is in the chamber. Ruger also slightly modified the traditional internal extractor to make it more reliable.

The SR1911’s slide features coarse rear cocking serrations that are easy to grasp and hang onto while pulling back on the slide. Ruger has also lowered and flared the ejection port. For targeting, the pistol features Novak sights in a three-dot arrangement. Both the front and rear sights are dovetailed into the slide, and they’re windage adjustable. Loosen a hex screw on the rear sight and use a punch and hammer to move it left or right. The dovetail cuts also make it easy to install your own choice of sights; night sights are also available from Ruger. The standard sights are big and easy to use. The ramped front sight is easy to find through the notch of the smooth, snag-free Novak rear sight.

Ruger outfitted the pistol with parts of its own design, and everything is built to Ruger’s specifications. The parts were intended to be interchangeable with standard 1911 parts. The Commander-style SR1911 is set up as most shooters expect a 1911 to be, with a long trigger and a straight mainspring housing. The extended beavertail grip safety has a decent speed bump that’s grooved so even a sloppy grip will disengage the safety, allowing the weapon to fire. The mainspring housing is straight and checkered in a fine pattern that grips the palm but is neither sharp nor spiny. The lightweight hammer has enough texturing for easy thumb cocking, and in its fully cocked position, the hammer fits in the notch in the beavertail grip safety. You don’t have to worry about hammer bite. Also, the extended thumb safety clicks authoritatively; it feels positive and clean. The slide stop is standard 1911 fare, and it works reliably.

Another Ruger modification is the magazine release button. It is slightly extended to make it easier to manipulate, but not so extended to interfere with comfortable carry or be pressed accidentally. The skeletonized aluminum trigger can be adjusted for overtravel via a hex screw in the trigger face. I liked how it was set from the factory and didn’t fuss with it. The face of the trigger is grooved so your finger can get a good, secure purchase. The trigger pull on my test pistol averaged 5.5 pounds, which is fine for a defensive-carry piece. The trigger can be described as crisp, which is unusual for a pistol at this cost. The SR1911 can also be dry-fired without damaging the firing pin.

All the controls, as well as the mainspring housing and grip safety, have matte black finishes, contrasting nicely with the matte stainless finish of the slide and frame. The barrel is bright stainless. The double-diamond-checkered grip panels are classic, but with a bit of Ruger branding. A medallion with the Ruger logo is inset into the wood. Ruger also used its trademark rosewood for the grip material. Hex screws keep the stocks on the receiver. Overall, the Commander-style Ruger SR1911 is a sweet-looking piece!

What will make 1911 purists smile is the Series 70 firing system. Ruger updated this traditional design and made it safer by using a titanium firing pin and a heavy firing-pin spring. At one time, pistolsmiths could make a living swapping out firing pins and springs as well as other features, but these are now standard on many of today’s 1911s, including the Ruger SR1911. The lightweight firing pin and heavy spring help reduce the chance of an accidental discharge if the pistol is dropped with a round in the chamber. The heavy-duty firing-pin spring holds the firing pin back during the jolt.

The SR1911’s steel magazines are manufactured by Checkmate in New York. Five witness holes show how many rounds are loaded. Pressing the magazine-release button, the magazines ejected smartly. The magazines have no basepads, which is ideal for concealed carry, but the floorplates are drilled and tapped if a user should want to add a basepad. Each pistol is shipped with two 7-round, stainless steel magazines, a bushing wrench, a gun lock and a soft case.

The Ruger SR1911 features a standard recoil guide system so the pistol tears down just like those Uncle Sam purchased for WWI and WWII. As mentioned, a bushing wrench is included with the Ruger SR1911, not that you need it. Pushing down on the recoil spring plug with my thumb, I could easily rotate the barrel bushing for disassembly.

To test the Commander-style SR1911, I used a mix of ammunition. Hornady’s 185-grain FTX JHP ammo gave the best grouping out of the pistol, but Black Hills’ 230-grain FMJ and CorBon’s 230-grain JHP +P rounds also produced good accuracy results at 25 yards. I used a rest and concentrated on the front sight and my trigger pull. Current military specifications for the full-sized 1911 dictate that the pistol must keep a five-shot group within a 4-by-4-inch box at 25 yards. The Ruger SR1911 was well within this requirement. In fact, the SR1911 got my attention from the onset. I was surprised by the pistol’s solid performance. Even with the hot CorBon and Hornady loads, the Ruger was a pleasure to shoot, and it shot well.

Loading the magazine was not a chore, and though the SR1911 did not have a flared magazine well, the sides are chamfered for easier, faster magazine changes. The seven-round magazines fit flush—just like they do on government-issue 1911s.

At 15 yards, I set up an IDPA-style target and fired for speed while trying to keep all of the rounds on paper. The Commander-style SR1911 was easy to control during rapid fire and manipulate for fast reloads. The pistol’s accuracy was solid, and that was refreshing to discover in a gun at this price point.

Not only is the Ruger SR1911 a smart-looking gun, but it also uses the classic Series 70 system in a stainless-steel package. This Ruger would no doubt perform well in a concealed-carry role. If an all-steel pistol seems like it will take effort to carry, think about this: The slightly extra weight of the Ruger SR1911 helps a shooter better control .45 ACP rounds. Plus the SR1911 is thin, flat and a natural pointer. 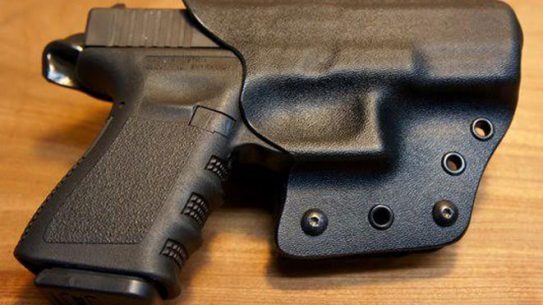