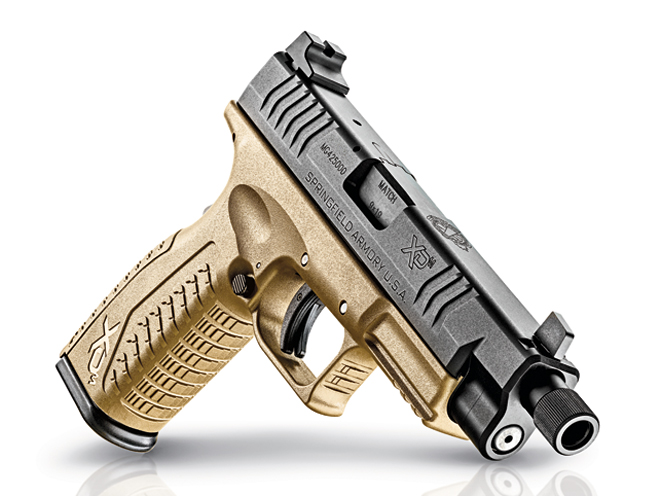 1 of 10
Springfield’s XD(M) 4.5-inch Threaded Barrel Pistol
As its name implies, Springfield Armory’s XDM 4.5-Inch Threaded Barrel comes with a match-grade barrel ready to accept sound suppressors. Both .45 ACP and 9mm (shown) models are available for tactical operators or discerning shooters who just want to run a little quieter on the range. 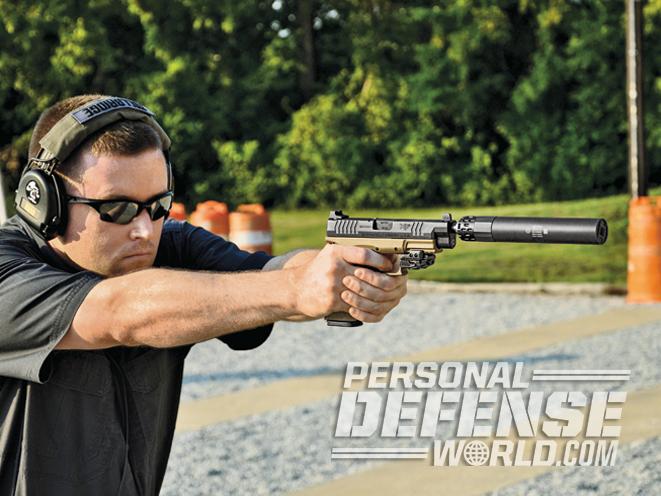 2 of 10
Springfield’s XD(M) 4.5-inch Threaded Barrel Pistol
We tested the XDM with Gemtech’s GM-9 suppressor, which features a monocore design and is user serviceable. The XDM proved 100-percent reliable, with and without the suppressor, using a wide variety of ammunition. 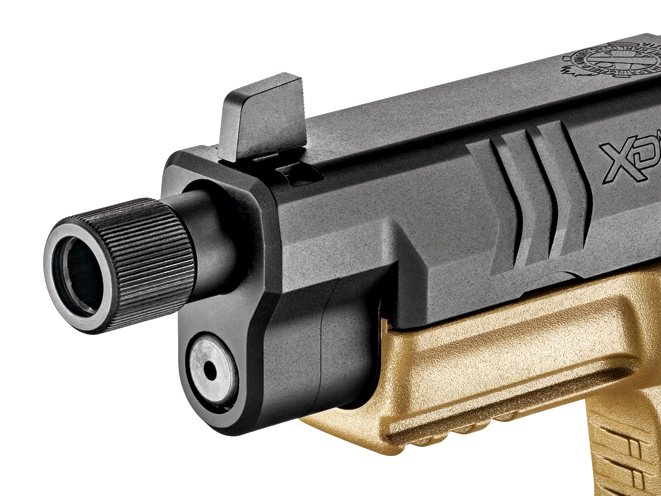 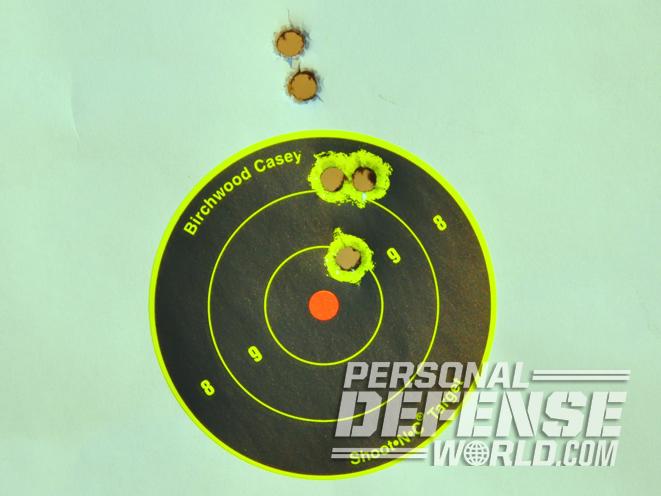 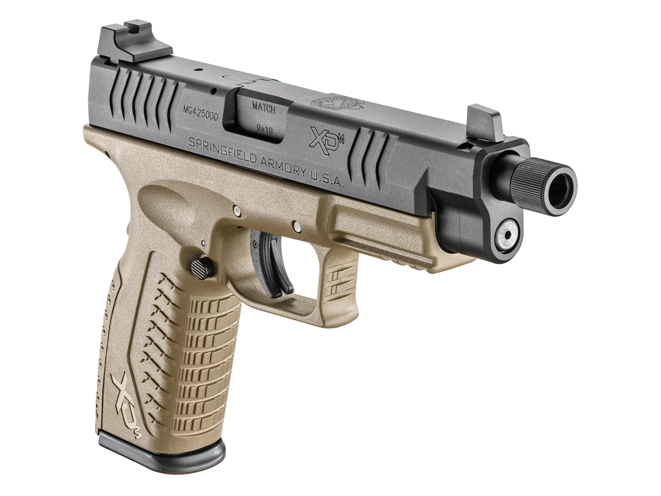 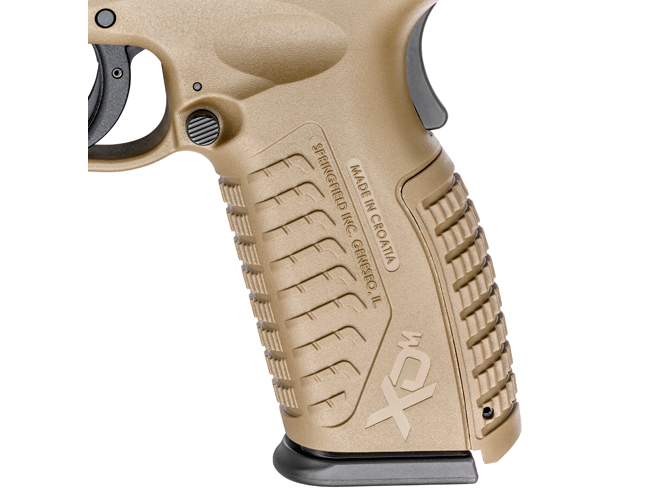 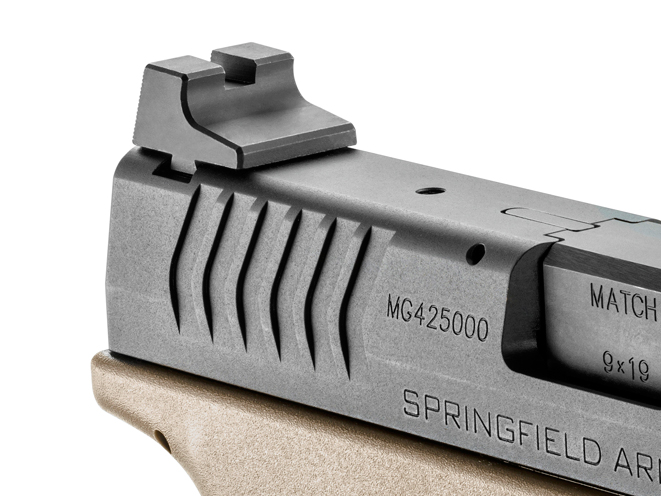 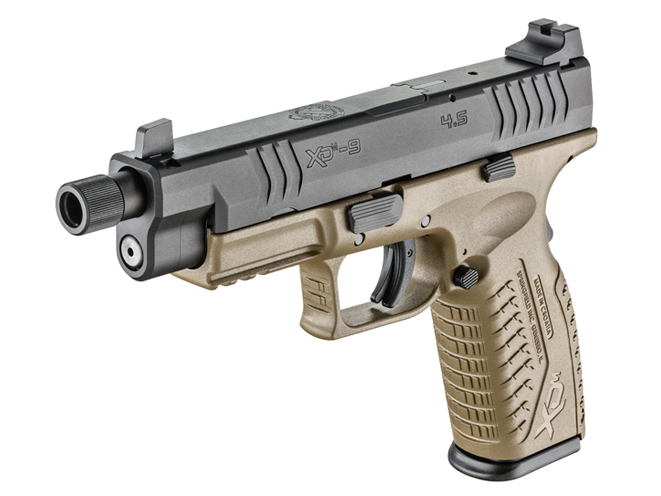 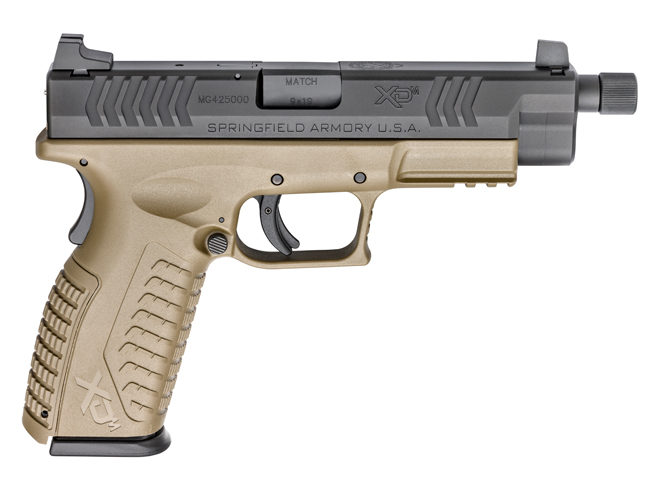 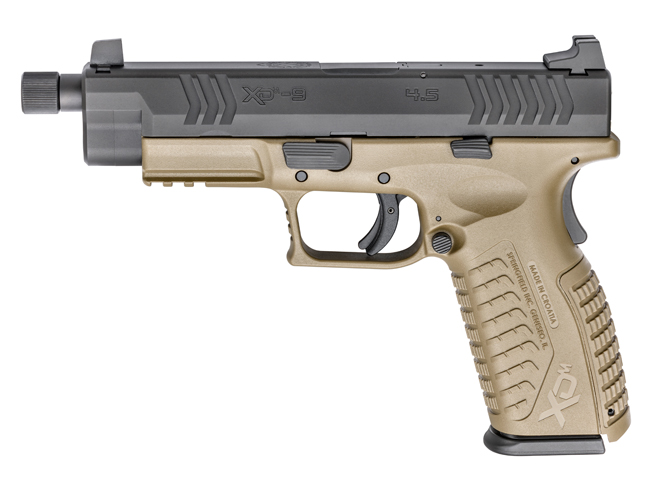 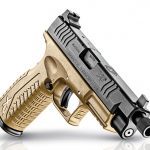 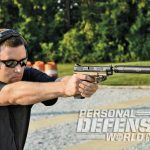 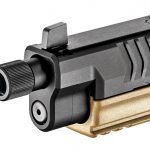 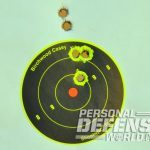 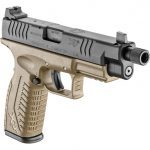 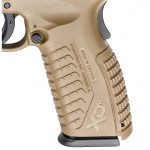 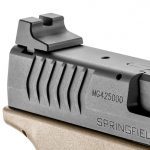 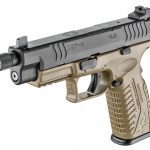 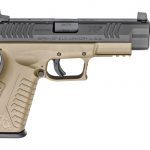 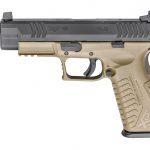 In 2001, Springfield Armory introduced the XD, a Croatian-manufactured, striker-fired, polymer-framed pistol. At the time, there were many skeptics. Almost 15 years later, the XD is not only alive but is a success story for both Springfield Armory and the industry. Over the years, I have evaluated half a dozen XD pistols and have purchased two. I found the original XD pistols to have excellent ergonomics and to exhibit reliability and accuracy.

In 2007, Springfield brought out the XDM series with interchangeable backstraps, improved grip texturing and a sleeker slide profile. Like the XD, the XDM is equipped with visual and tactile indicators for both a loaded chamber and a cocked striker. The Ultra Safety Assurance (USA) trigger system prevents unintentional rearward movement of the trigger. The XDM is the only polymer-framed, striker-fired pistol on the market to feature a grip safety that both blocks the trigger and prevents the rearward movement of the slide until it is depressed. There is also an internal firing pin block that will prevent a discharge if the pistol is dropped.

The ergonomics of the XDM grip makes it one of the smallest-diameter grips on the market. The ambidextrous, cross-bolt magazine release is a cam design that locks on the forward edge of the magazine. This design allows the magazine to be released by depressing either side without any modifications. The XDM has three interchangeable backstraps that allow the individual user to adjust the grip to fit the hand.

In 2010, I evaluated AAC’s 9mm Ti-RANT suppressor using a XD 4-inch Service Model with a custom 5-inch threaded barrel provided by Dave Williams at Springfield’s Custom Shop. I suggested to Dave that Springfield should consider offering suppressor-ready pistols. Dave’s answer was very candid when he said it was something that was being “talked about.” Fast-forward to 2015 and Springfield has just introduced the XDM 4.5-inch Threaded Barrel in a suppressor-ready configuration in both 9mm and .45 ACP.

My 9mm test gun came with accessories housed in a polymer attaché-style case. These included three full-capacity magazines (standard w/purchase), two additional backstraps, a mag loading tool as well as a holster and a double magazine pouch. All were fitted nicely in the custom-cut foam case. There are even two sections of Picatinny rail, on each side of the case, to mount accessories.

I had forgotten just how well the XDM felt in the hand. I did some rough measuring of the grip diameter at the base of the triggerguard. The XDM measured right at 5 inches. This was compared to 5.375 inches on my M&P9 VTAC and 5.75 inches on my Glock 19 Gen4 with a Grip Force Adapter installed. Trigger pull on the XDM averaged 6.25 pounds and broke with a clean, grit-free roll with minimum overtravel. The Mega-Lock grip texturing provided a positive purchase without being overly aggressive.

The new suppressor-ready XDM comes in either black over black or with a black slide and barrel with a Flat Dark Earth frame. The match-grade barrel measures 5.28 inches and came with a thread protector. Finally, since this is a suppressor-ready pistol, Springfield equipped the XDM with a set of dovetailed, high-profile, three-dot sights. The front sight is 0.375 inches in height and will easily clear most suppressors. The rear sight features a thick blade that has a hook on the leading edge while the trailing edge is serrated to reduce glare. While our sights were white dots, tritium inserts are available upon request.

The GM-9 is one of Gemtech’s new monocore designs that have been specifically engineered for maximum sound reduction. New materials and coatings are being used to improve the lifespan of the suppressor and allow easier cleaning and maintenance. As with all G-Core suppressors, the GM-9 is to accept a standard socket size for disassembly. The GM-9 is rated for full-auto 9mm use as well as with 300 BLK weapons with a 7.5-inch or longer barrel. The GM-9 weighs a mere 5 ounces without a mount and has a tube diameter of 1.25 inches. With the thread-on mount, the GM-9 measures 7.75 in length.

On the range, I ran a variety of 9mm loads through the XDM, both suppressed and unsuppressed. The XDM ate every load we tried, from the ultra-light 84-grain HPR Black Ops load to Winchester and Federal 147-grain duty loads. The XDM functioned flawlessly. While the centerline of the bore is higher than some pistols, we found that the ergonomics of the grip and grip angle worked to reduce recoil and muzzle flip. Our range conditions were 95+ degrees Fahrenheit with well over 85-percent humidity. The Mega-Lock grip pattern provided a secure purchase without being overly abrasive.

For more formal testing, I selected two standard-velocity duty loads and one subsonic load. The PNW TacOps load is a 115-grain solid copper projectile. Sig has recently introduced a new line of duty and practice ammunition and we used its FMJ load for photos. Its 124-grain load is a traditional jacketed hollow point that is designed for duty and personal defense. The HPR load is a 147-grain JHP that is subsonic for a reduced signature when using a suppressor. The PNW TacOps round averaged 1,152 fps while the Sig 124-grain JHP averaged 1,204 fps. Both produced consistent groups that measured in the 2.5-inch range. The HPR suppressor-specific load averaged a mild 946 fps and produced a group that measured just over 2 inches.

The Gemtech GM-9 performed well with both standard velocity and subsonic ammunition. Evaluating suppressors, outside of a sound laboratory, is always subjective. I did find that the GM-9 tended to have a louder first-round “pop” than expected. We mitigated this by introducing a small amount of water into the blast chamber. CLP or a similar lubricant or wire pull gel can also be used and are equally effective.

We also took the opportunity to use the paddle holster and magazine pouch that came with the XDM. While basic in design, both are perfectly functional and worked well during a variety of drills and presentations. By including the holster and magazine pouch, the XDM 4.5-inch Threaded Barrel is ready to run right out of the box. I also appreciated that Springfield ships each XDM with three magazines. This is a feature that I would like to see more manufacturers consider.

I installed a Crimson Trace CMR-206 Rail Master green laser unit on the XDM. The Rail Master mounts to the dust cover using Crimson Trace’s modular Secure Lock Technology. This modular system has several mounting interfaces to ensure proper alignment and fit on a wide variety of weapons. A paddle switch on each side of the unit is used to activate and deactivate the laser. The CMR-206 has three different operating modes: constant, momentary and strobe. On the range, we found the green dot was clearly visible at 15 yards or more, even in bright sunlight.

The XDM 4.5-inch Threaded Barrel is well suited to competition, personal defense and concealed carry. With the addition of a threaded barrel, it now fits the bill for shooters who own or are planning to purchase a sound suppressor. Springfield Armory has just made the entire process easier. 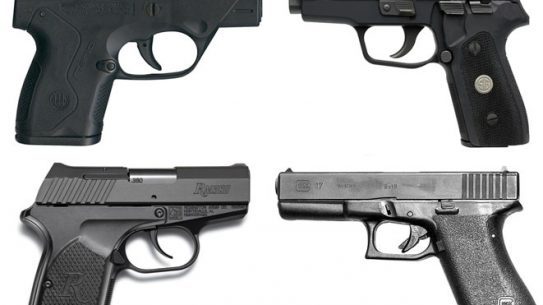 A look at a dozen new and old autopistols from Beretta, Glock, Remington, Sig...