Ready to rule the swamp? The Charter Arms Gator offers plenty of bite with an eye-catching finish. Shown with Crimson Trace Lasergrips.

Beauty is in the eye of the beholder, and Charter Arms is aiming to make guns beautiful to as much of the shooting market as possible. The company has long offered finishes that include bright green, lavender, tiger stripes, a mottled pink pattern called the Cougar and a pattern inspired by the flag of the United States of America. Now the company offers the Gator.

As part of the Undercover line of wheelguns, the Gator revolver offers a new style option for someone wanting a compact revolver designed for personal protection. Charter Arms uses a color transfer process to apply an alligator-skin-type pattern to the barrel and frame of the firearm. A matte black finish is applied to the cylinder, crane, trigger and hammer. While not a finish that will appeal to the masses, it is a striking look that will excite a portion of today’s modern shooting market.

The Charter Arms Gator is a five-shot snubbie that traces its roots back to the original Undercover revolver that launched the company in the mid-1960s. Designed for the .38 Special cartridge, the gun is rated to handle +P ammunition and has a 2-inch barrel.

The Gator is manufactured with an exposed hammer than can be cocked for single-action shooting if desired. As with the other Charter Arms revolvers I have shot, the single-action pull was outstanding. When cocked, the trigger had a light 4.8-pound pull that broke cleanly with no excess movement, while the double-action trigger on the Gator was fairly heavy out of the box. It hovered in the 12-pound range after 250 rounds. The trigger face is ridged lengthwise.

The sights are adequate for a snub-nose revolver. The front ramp is integral to the barrel and, barring cataclysmic force, will not be knocked off of the gun. If it moves, then the whole barrel has moved and you likely have more problems than simply a sight being out of alignment. The rear sight is just a channel trenched into the topstrap of the frame. This system is fairly typical of many revolvers, especially smaller guns. While not ideal for fast, accurate shooting under stress, I’ve found it can work with ample training.

Charter Arms uses large rubber stocks on the Gator. These grips offer excellent control of the gun, and I found they fit my medium-sized hands well. The front of the stocks has finger grooves, which I could do without. Grips on small revolvers tend to be either small for improved concealment or larger for improved shooting. Charter Arms leans toward better shooting with these grips. While not difficult to conceal in a belt holster, the grips make it virtually impossible for me to use this gun as a pocket carry piece.

One of the things I really like about Charter Arms revolvers is the placement of the cylinder-release latch. Compact revolvers from some other companies position the cylinder-release latch in such a way that it has a tendency to scrape the joint of my shooting thumb. If I fire too many rounds on the range, I will literally have the flesh ripped from my thumb. This is not the case with the Charter Arms revolvers, including the Gator. I shot many rounds through the Gator, and not a single time did the latch rub on my thumb. Like the trigger, the latch seemed to have a gritty feel to its operation. As I used it, it became easier to manipulate.

Charter Arms provides a lifetime warranty on this handgun. All of the gun’s parts are made in the United States of America. In fact, the company sources all parts local to the company’s manufacturing plant in Connecticut. 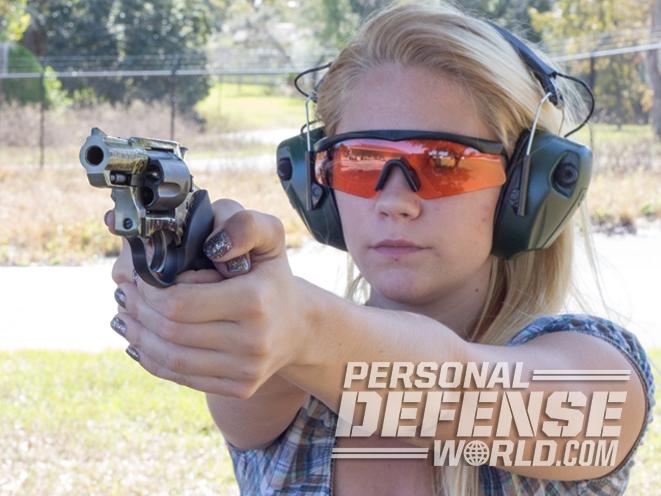 I took the Gator out on the range twice and put roughly 350 rounds through it in total. Every round went bang and hit the intended target. As more rounds were fired downrange during testing, the overall feel of the gun improved.

The best-shooting ammunition of the group was the Winchester Kinetic HE. This is a standard-pressure, 110-grain HP load that grouped just a bit over 2 inches when shooting double action at 7 yards unsupported. All of the other loads shot larger groups, with most more than 3 inches in size.

With ample lighting and a white or light-colored target, the front sight was easy to pick up and put on target. White fingernail polish on the front ramp would likely make it easier to see in lower lighting situations. The rear notch is wide enough to work well with the front sight.

Charter Arms uses a barrel that is machined with eight grooves instead of the six that are found in other revolvers. According to the company, this leads to an increase in bullet velocity. Shooting the three loads listed in this article from both the Gator and a 1.875-inch-barreled Smith & Wesson 642, the Gator was slightly faster with two of the loads, but actually slower with one of the loads. Arguably, the increased velocity could come from the additional barrel length instead of the additional grooves in the bore. 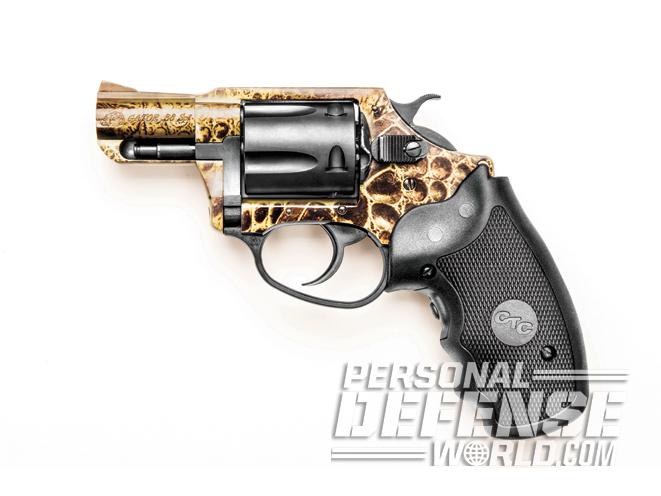 In my experience, Charter Arms makes reliable rimmed-cartridge revolvers. I’ve extensively shot the company’s Bulldog and Off Duty wheelguns, and found them to be good-quality handguns that were reasonably priced and reliable for concealed carry. The Gator is another reliable handgun that has been gussied up for those looking for a little more flair in their daily concealed-carry weapon.

Although the gun is not perfect, it is a credible consideration for anyone needing a wheelgun for self-defense. The revolver performed well on the range. Since the other examples I’ve shot from the company had significantly better triggers, I expect that other Gator revolvers will also have an improved feel to the trigger and overall operation. Just make sure to check the gun out in your local gun shop and ensure it feels good to you.